Madonna Arrives in Cuba to Celebrate Her 58th Birthday 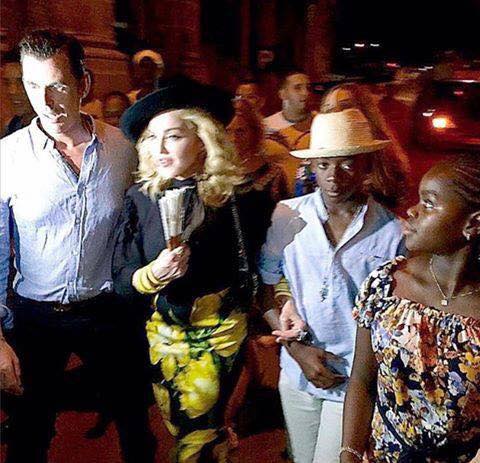 News outlets from around the world and the social media have leaked that Madonna is in Cuba. Right now, the pop diva is staying at the larger-than-life and bustling Saratoga Hotel in Havana, the same lodging where Paris Hilton stayed a couple of years ago. Tonight, followers, journalists and paparazzi had swarmed over the hotel’s lobby hoping to catch a glimpse of the superstar. Caribbean News Digitaltracked down a fan’s Twitter account in which the follower wrote that Madonna had arrived in Havana to celebrate her 58th birthday on August 16. Madonna is traveling with actor and model Loic Mabanza, who Instagrammed a picture of Madonna boarding a personal jet en route to Cuba. According to Mr. Mabanza’s Twitter account in French language, the American singer was planning on traveling to Cuba with her personal stylist B. Akerlund, hoping to “throw a genuine Cuban party.” Photographer Steven Klein is also traveling with Madonna. Madonna has come to Cuba from Miami with an entourage of relatives and friends to hold a private party in the Cuban capital. She’s booked to have dinner tonight at a famous mom-and-pop bistro in Havana –allegedly La Guarida- which is all the rage among the beautiful people. The restaurant is nestled in Old Havana’s historic center.