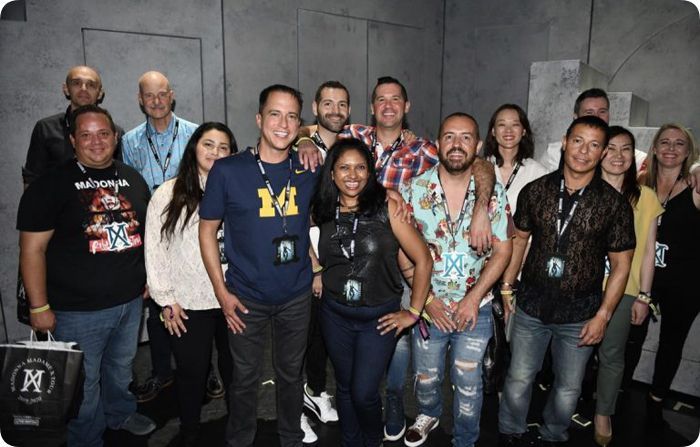 When Madame X Tour was announced, the first cities were in the US and to buy tickets there was a lottery system. I saw the prices and told myself: Go for one ticket in NYC. I saw the list of cities and the days of each show and decided to enter the lottery for only one in one city and one price range: VIP Medellín. Front row experience. And yes, 1,995USD plus taxes. I entered.

The day the lucky winners were announced I was really nervous. No email. No email. Then I decided to check my credit card status and voilá, the charge for the ticket was there. The same day I received the email confirmation in the afternoon. Days before they emailed me with my seat: Row AA seat 12. Haaaaaaappy.

So this year my holidays were going to be in the US, last stop NYC. I had to be in NYC on September 21st. I arrived in NYC on September 16th. The opening night was going to happen on September 17th. I had no tickets for that show. So I entered the Icon contest for 10$ tickets but I did not win. So my friends and me decided to go to a Broadway musical: Beetlejuice. Next concert happened on Wednesday 18th. For that show there was no Icon contest, and I had a cruise on East River reserved. During the cruise I decided to check Ticketmaster, to see how much were tickets for the next concert, Thursday 19th. Then I realized prices went down for the unsold seats even the verified resale tickets. And I saw one ticket that my heart started beating fast: Mezzanine Row A. I bought it. My friends didn´t have tickets for any concert, they were with me just for holidays. But on Thursday they went to Ticketmaster and got tickets in Mezzanine for 95$. So we all went to the concert that day. No long queue, at 8pm we were inside the venue. That day the show started around 10:30pm. For me, I really enjoyed myself while waiting for the concert to start.

Show started. Amazing! No spoilers. But I had read that at one moment she took a selfie with a polaroid and sells it to the audience. First day, Rosie bought it. Second night Andy Cohen bought it. That night I was attending I saw how it was sold. Two fans went in front of stage, they offered around 100$. Then a girl from row D or E went and offered 1,000USD. OMG! She got the polaroid. Madonna said: “Only cash”. 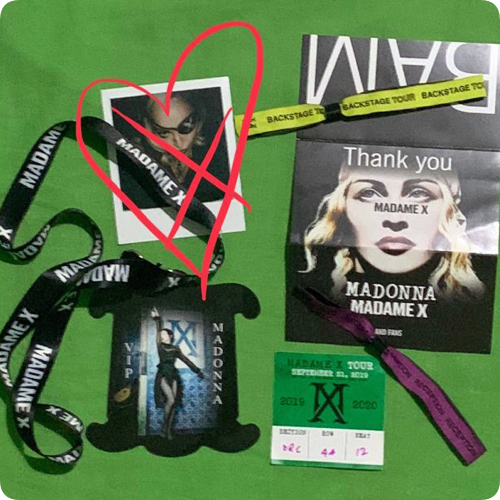 My mind started to think the idea of trying to buy it on Saturday, I was going to be front row. So I decided to try it and went to an ATM and got cash.

Now my experience as VIP Medellín. Saturday September 21st, BAM. I arrived at 6:30pm. Only 5 people on VIP Live Nation queue. We entered the theater at 7pm. I went to the VIP area, there you can use your phones. Drinks, appetizers, photo call, music. Fantastic time there. Backstage tour started at 8:40pm. Amazing experience. We saw many area’s, and also where Madonna changes costumes. Toni Villanueva was there. Also we saw Celeste Rodrigues’ grandson: he plays with Madonna on stage. Applauses.

Then polaroid moment arrived. I was in my seat. Madonna said: “How much will you offer for it”. Two or three people went near the stairs to the stage. So I moved there too. I went down on my knees. I had in mind what I was going to offer, I had the cash in my wallet. A young boy told: “It is my birthday, I offer you 500USD”. My heart started beating faster. OMG it is his birthday! But I was not going to fight against him. I had my money in my wallet and I took it out and a paper where I wrote the money I was offering. And displayed. Madonna said: “Madame X is a material girl”. Then looked at me and asked me: “How much do you offer?”. I told: “1,500USD” (and… I´m not a rich, don’t hang your shit on me…). I wanted wanted the polaroid so badly (well, everybody offering money wanted it so badly too). She asked my name and what I did for living. Told her: “Juan from Madrid. I work in a hospital, I´m a nurse”. “You save lives”. I think some people said: “For him (the polaroid)”. Maybe I´m wrong and they said the opposite. We counted the money, we shook hands. She also shook the hand of the birthday boy. I returned to my seat.

Wow, I was in heaven, I was in front row, Madonna in front of me, talking to me, and the polaroid in my hand… But the concert was on. I focussed again on the show and Madonna.

Now a little spoiler: at some point, she goes down to the orchestra section, and seats on a special seat put there for her: seat #16 (later removed when she goes back on stage). So she was there again (I noticed on Thursday how good my seat was, so I knew she was going to sit and speak with the guy next to me). She was so close to me and at same face level, that I was looking at her face and eyes for about… 5 minutes? 8 minutes? That was heaven. She also spoke to me while she was there, and when she left back to stage she said: “Thank you Juan for the cash”. OMFG!!!!!!!

I´ve seen her front row many times in Europe, but in previous tour in Europe the arena or stadium floor is standing, no reserved seats, so if you want front row you have to be in line for at least 2 days. Many people do it, I do it. I even know people that queued for one week. My first Madonna concert was DWT opening night in Barcelona. Since then, all tours. I used to go to one or two concerts each tour, maybe 3, but not more (I´m not a rich, don’t hang your shit on me). For this tour I already have been 2 in Brooklyn. I have tickets for 2 more in London and one more in Paris.

The concert was amazing, her voice sounded perfect. My favourite part was Frozen. You need to look at her and the backdrop video.

End of the night. Needed to sit for 10-15 minutes and text my friends. I was shaking. And then back to Manhattan by metro.

Thank you to Juan! 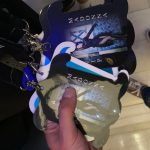 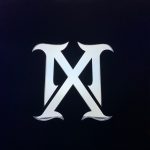 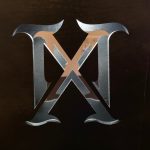 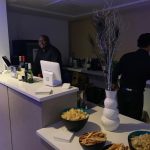 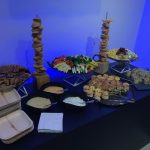 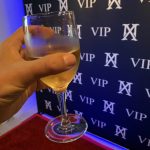 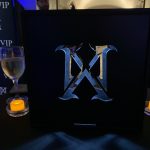 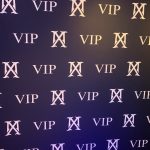 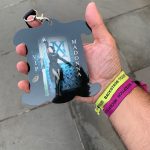 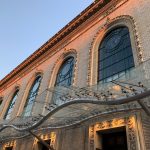 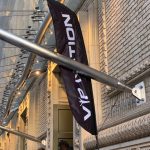 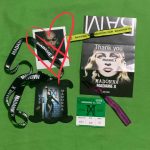 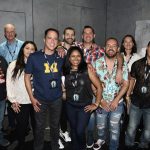