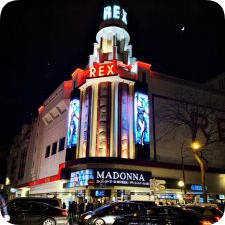 The Show was great but shortened. She started with Vogue, no talk in the crowd (beer she got from Gaspar) but I didn’t mind (saw the full show in Chicago).

At one point the Polaroid was sold to a woman from Germany (Olivia) and somebody said something about politics which pissed M off and rightly so. She said every country still has or has had a head of state which has done wrong and she made a point of thanking Olivia and that it was nice meeting her. And I cheered loud! But other than that she was in a good mood.

Movements were slower than usual and careful but she still is fantastic. I love her for everything she stands for. My highlights were Extreme Occident (sang beautifully), Frozen of course and I Rise. And I like her man, he’s so sweet with her on stage.

The Grand Rex is a beautiful venue, acoustics were a little off (loud and shrill sometimes). The crowd was enthusiastic and it was a magical evening with Madame X.