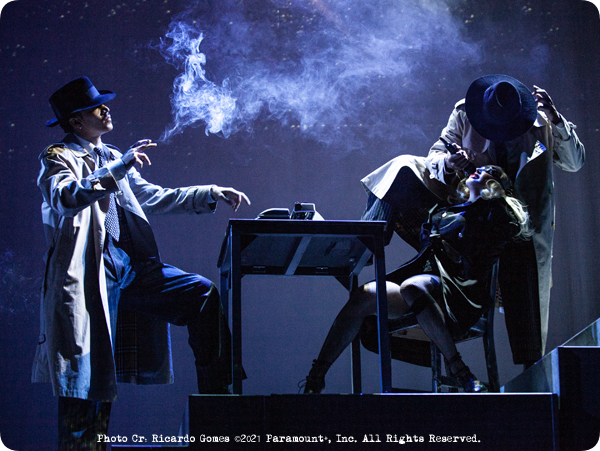 MADAME X may be a secret agent and a cha-cha instructor but she’s mostly an amazing live performer. Despite the fact the tour seemed cursed with the late starts, postponed dates and cancellations (which affected all of the shows I had booked) it didn’t take away any of the sheer magic Madonna delivered on stage each night. I was privileged to see the MADAME X screener by Paramount+.

MADAME X is not a documentary but a concert film so I am confused why it’s been labelled as such. It’s a musical journey from the start up until the uplifting and fitting end. The first thing many fans were concerned about were the fast cuts Madonna’s latest live releases have been criticized for. The MDNA Tour saw the start of a new way of directing and producing the concert film. To me the Rebel Heart Tour release was unwatchable. A new frame per each passing second made my head spinning, and no it genuinly wasn’t the alchohol. Sadly this affected experiencing the film as a live concert, and ain’t that what a live experience is all about?

You can breathe a sigh of relief as MADAME X is nowhere near the level of the Rebel Heart Tour edit. Sure there are fast cuts here and there, but it flows better and matches the clips of the songs being performed.

The concert film starts with a compilation of past controversies such as media headlines, articles, photo’s from SEX, Secretprojectrevolution and the insanely genius backdrop video of Mer Girl II as seen in the Drowned World Tour. The video transfers over to the intro with dancer (and current boyfriend) Ahla Malik as we’ve seen it being performed. Though it’s all in black and white and the shots fired are tainted red. The intro moves over your screen in typewriting while we get glimpses of the audience and there’s an obvious mixture of professional and cell phone footage.

After the last shot fired we see footage of various protests, including Black Lives Matter and the outcry after George Floyd’s murder before Madonna kicks off the show with God Control. The curtain lifts and there are colors and lights everywhere, the footage is clear and bright and Madonna’s vocals are quite raw and unpolished which is refreshing! An actual live vocal performance (though I can’t confirm the vocals haven’t been polished at all) does give you that actual “LIVE” feel. When Madonna climbs the stairs to stop on top and calls for “A New Democracy” the footage is slowed down and all goes silent while Madonna throws her hat onto the stage. The performance ends with dancer Marvin putting her hat on and walking away.

Madonna’s infamous speech for the Vatican as used and seen in Truth or Dare (the use of this footage, still in black and white is pure nostalgia and recreates that Blond Ambition Tour vibe) leads us into Dark Ballet. Visually stunning with shots of the music video with Mykki Blanco shifting to the live footage. Madonna ‘fighting’ with her dancers with gas masks on compares to the Impressive Instant performance of the Drowned World Tour.

Human Nature is a pleasure to watch. It’s quite obvious now that multiple shows have been used for this concert film, eyepatches suddenly go missing and a variety of blond wigs. Honestly it didn’t bother me at all and doesn’t affect the experience. Multiple songs have minor cuts but it’s done in such a way that it’s only notable if you pay close attention. While we move over to the first chat section there’s a slight change in audio (low/high) and what confuses me is that some of Madonna’s chatter is subtitled in red typewriter font, but not all. There’s also even a blink of the Revolver backdrop as used in The MDNA Tour, this is not the first flashback to The MDNA Tour but I will get back to that later. 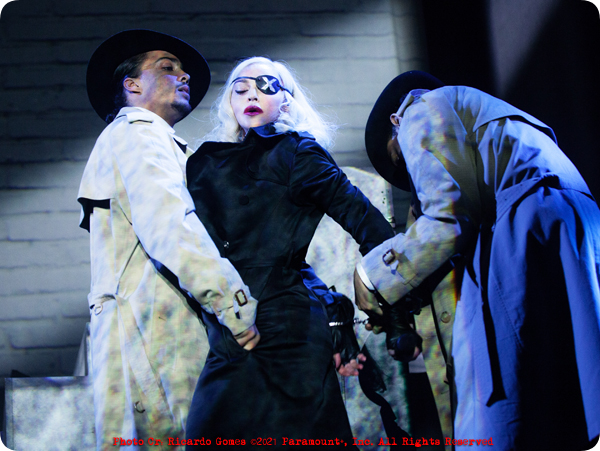 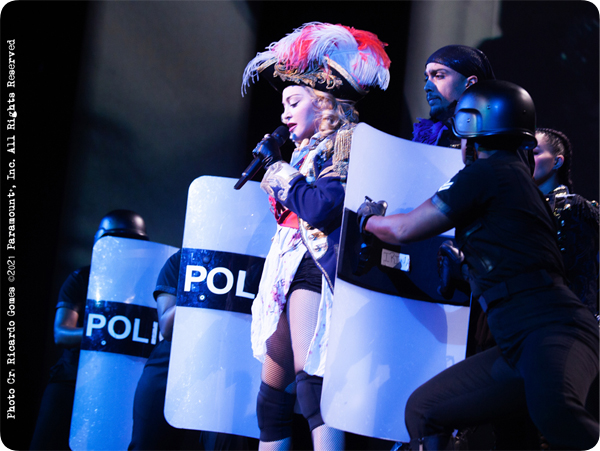 Before moving on to VOGUE, there is no MADAME X manifesto as seen in the show. The performance is absolutely incredible and one of the many highlights. This particular edit could easily be used as a promotional video for this release as it watches like a music video. The wig changes are quite present here and the footage switches from color to black and white. I Don’t Search I Find is just as stunning and the interrogation scene is shot entirely in black and white. The conversation that is supposedly being taken place is subtitled in French. Next there’s a mash-up of multiple polaroid auctions and Madonna chatter. Madonna jokes around saying it’s hard to hear with one eye and tells a fan to f… off when she’s being asked if she can sign the polaroid he bought. She also takes the time to explain why she likes to wear the grillz, she just really enjoys irritating people. Honestly it’s all good fun. A few audience shots are used repeatedly and my eye caught sight of footage that’s originally from The Mdna Tour live recording.

American Life is a mash-up of the live performance with scenes from the withdrawn uncensored music video. We finally have some sort of official release of this forgotten masterpiece directed in 2003 by Jonas Akerlund. Batuka is introduced by scenes from the music video and its history explained on screen in the familiar typewriter font. The performance is so uplifting and so stunning that it’s absolutely impossible to sit still. Madonna looks every inch the star she is and she glows while she’s truly enjoying this performance with the Batukadeiras Orchestra. Madonna then chats to her audience about moving to Lisbon, Fado and Celeste Rodrigues. Madonna cracks up when she asks the audience if there are any gay people present. After singing Fado Pechincha with Gaspar Varela (crystal clear vocals, once again the audio really impressed me) she performs Killers Who Are Partying before moving on to Crazy and Welcome To My Fado Club/La Isla Bonita.

Medellin lights up the room and I travel back in time to The Girlie Show’s Deeper and Deeper performance. Visually stunning, so much joy and such a feel-good song. Maluma makes quite a few appearances on our screen and we can’t complain about that. The Beer Bitch is Dave Chappelle and honestly this could have been shortened or cut all together as it just takes the flow out of the show. The transition between this and Extreme Occident is abrupt and confusing. This performance was so minimalistic but that’s what makes this work. It’s another breathtakingly stunningly shot performance.

After the Rescue Me interlude we witness the absolute highlight of the entire concert film, Frozen is a masterpiece. The footage is obviously taken from the re-shoots in L.A., but it’s magnificent. The visuals of Lola dancing with Madonna singing is art in its purest form. The choreography by Damien Jalet is fantastic and it’s probably one of the best performances I have ever seen. Come Alive is shortened in intro and outro but still so uplifting to watch. The performance is mixed with footage from Madonna’s 60th birthday bash. Try once again to sit still with this one! Future is also taken from the re-shoots in L.A. and Madonna often looks directly into the camera. Crave has been cut and the show moves on to the performance of Like a Prayer, the ultimate crowd pleaser and therefore a lot of audience shots. Before Madonna ends the show with I Rise there’s a voiceover by Madonna telling why she wrote the song and what it means to her while we’re being presented with footage of (recent) protests and marches.

Madonna ends I Rise by walking through the crowd and exiting the theater. Before the credits to ‘Ciao Bella’ roll we get to see a short clip of Madonna’s hero and inspiration James Baldwin sharing a very wise quote, which seems a fitting end for such an uplifting and inspirational journey. Madonna states that Artists Are Here To Disturb The Peace, and she certainly hoped she has disturbed ours.

MADAME X will be hailed, must be hailed as one of Madonna’s greatest live achievements, and that’s why it’s so unfortunate that so many fans never got to see the show in real life.

In this case DO go for second best baby as MADAME X is a must-watch! 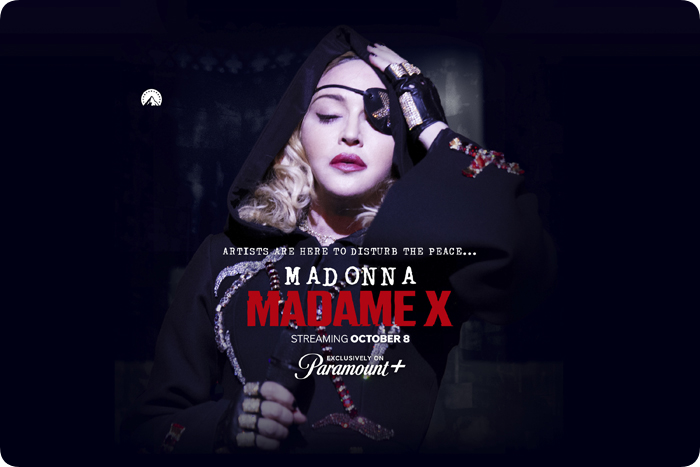