Madame X slays again….without the wig, with a stopwatch and explains why show is cut 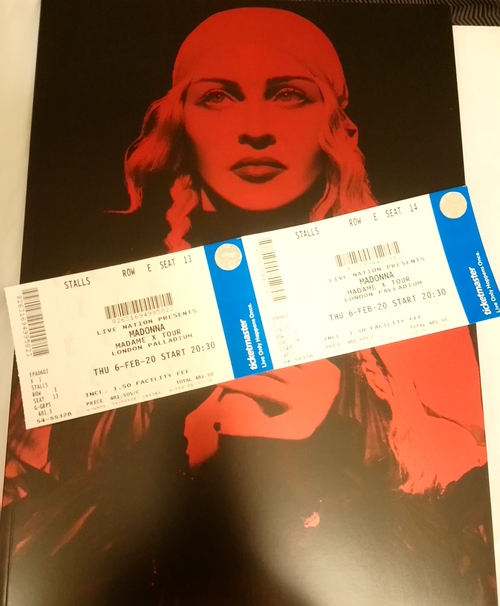 Madonna started the show with ‘Vogue’ as expected, cutting the first section of the show. She wasn’t wearing a wig and later asked the audience ‘wig or no wig?’ and decided to leave it off, no wig saves time.

Madonna explained to the crowd that because of her injuries she had to make a decision and that was to either cut songs or no show at all. You can expect that when Madonna performs two shows in a row, the second one will start with ‘Vogue’

She was in a very chatty mood and kept joking around. She was having fun on stage but kept referring to the curfew and the iron curtain. It was quite obvious that she was upset with the theater’s ‘stopwatch’ as she called it. Because of this ‘stopwatch’ she told the audience she would be shortening her storytelling. Her way of explaining how ‘Madame X’ came to be, was hysterical.

While finishing up the Fado song ‘Fado Pechincha’ with Gaspar she said that this particular song was dedicated to ‘the two people that just left’. She kept complaining about people leaving (for drinks or bathroom breaks) as she was ‘trying to put on a show’ and demanded that people kept the doors shut.

Polaroid sold for 2000USD to Arek, who she referred to as ‘the cheapskate from Poland’. She said she remembered his face, as he tried to buy the polaroid yesterday as well. But she was friendly and witty about it.

No beer bitch moment but a very intimate a-cappella ‘The Sound of Silence’ by Simon & Garfunkel. Magical. She didn’t get off the stage to dance with the audience during ‘Medellin’.

She made it on time and managed to sing ‘I Rise’ as it was meant to be performed. While fistbumping yours truly she made her way out of the theater.