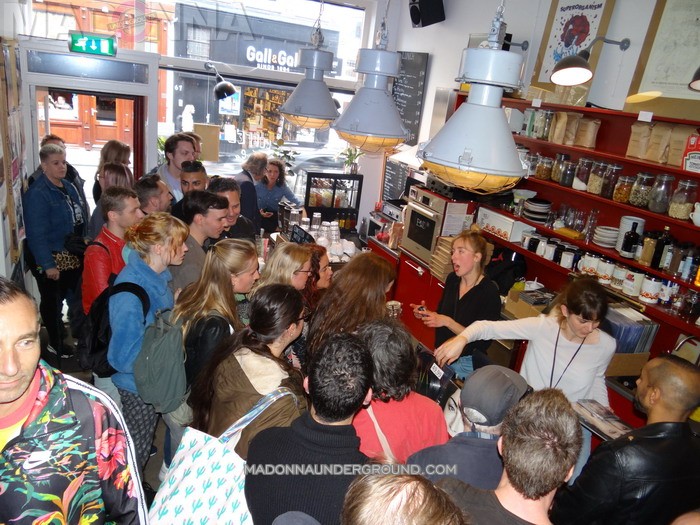 Thursday evening at 7pm we were FINALLY allowed to buy our copies of Madame X. I arrived early at Concerto to help Kimberly, Amon and the Concerto staff preparing for the party.

Around 6.15pm the first fans already appeared in the shop desperate to buy the album. When you bought a copy it came with a cool goodiebag and 2 posters.
At 7 the album was played for the very first time. I was ‘like a virgin’ and only knew the songs previously released on Spotify. Even though I couldn’t hear much, because of speaking to other fans and handing out posters, I was impressed with what I heard.
It was great to see so many familliar faces, everybody was really enthusiastic and having a good time. The dancefloor was filled within minutes, this makes me so happy. Really love these kind of events.
So in the next few weeks I will have Madame X on repeat!!
This album is GOLD
Dave Crombeen
June 16, 2019
Tags: concertomadame x
Share this post
Share on FacebookShare on Facebook TweetShare on Twitter
Go to Top
We use cookies on our website to give you the most relevant experience by remembering your preferences and repeat visits. By clicking “Accept”, you consent to the use of ALL the cookies.
.
Cookie SettingsAccept
Manage cookies