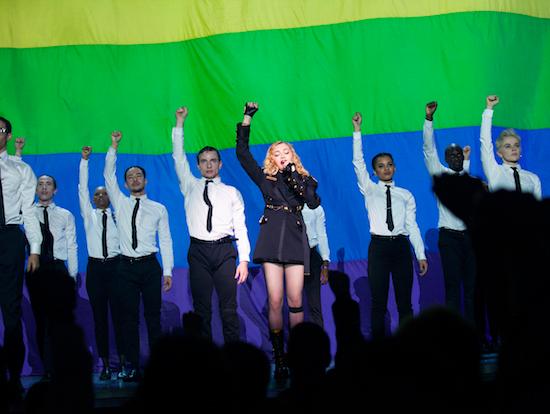 There is sense of trepidation as we sit, mobile phones locked in special pouches, staring at the velvet stage curtains on the opening night of Madonna’s Madame X tour at the London Palladium. Earlier in the week she was forced to cancel the first of her 15 London dates due to knee injury, and had already cancelled dates in the US and Lisbon – one 45 minutes before a show.

Just before 9pm the curtain rises on a screen featuring James Baldwin’s words: “Artists are here to disturb the peace.” The crowd – a flamboyant mix of women, gay men and the gender fluid – cheers loudly, partly with relief. Starting with the rigid, Auto-tuned defiance of ‘God Control’, Madonna carefully moves down a white staircase wearing what looks like a pirate costume with a blood spattered apron. It’s not a flattering outfit, but that’s the point, and that’s what I like about this new iteration of Madonna. There aren’t many female pop artists who open a set with a bloody apron and dancers dressed as police with riot shields.

From there she takes on the Catholic hegemony with ‘Dark Ballet’, a Rococo ballad about Joan Of Arc that segues neatly into her 1995 hit ‘Human Nature’, a retort to all those who complained about her Sex book.

“I’m not your bitch/ Don’t hang your shit on me,” she sings with satisfaction, the crowd joining in the hearty chorus. Whilst dancing she even manages a kundalini yoga pose, executed tongue-in-cheek with a slight wobble. Ironically, the admission of health issues has given Madonna permission to be fallible and flawed. ‘I need to sit down,’ she says at one point, taking a chair. I remember Madonna aged 50 on her Sticky & Sweet tour furiously skipping with a skipping rope as if to maintain the illusion of invincible strength. Then she was consumed with keeping up, but tonight she paces herself, trading quips with the crowd – at one point she takes a selfie with a Polaroid and tries to auction it off – dancing in a way that’s expressive rather than athletic. 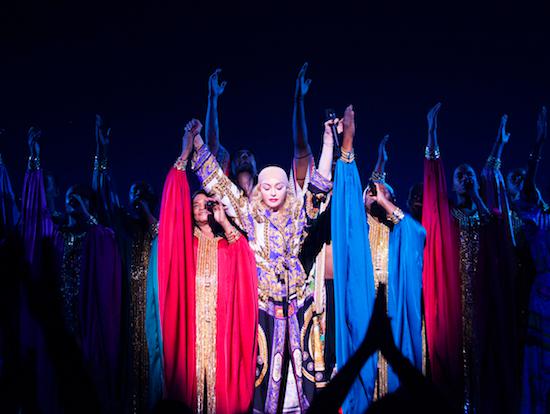 Madonna performs only a few past hits, and the ones that work best are totally re-imagined. ‘Express Yourself’, for instance, sung a capella with her Malawian daughters, and ‘Frozen’, delivered against a moving backdrop – a giant video of 23-year-old Lourdes dancing. ‘Vogue’, however, comes across as a static Warholian tableau, with her dancers in trenchcoats and Marilyn Monroe wigs. Too young to have lived that Vogue era, their performance lacks the raw underground energy of the original Blond Ambition posse.

Most of the set focuses on Madame X material, and this is where Madonna is most comfortable. An air of spiritual reflection is fuelled by the last two years living in Lisbon, partying with local musicians and absorbing everything from mournful Portuguese fado to devotional Moroccan Gnawa. Woven throughout the show is her exploration of exile, dispossession, and liberation, whether it’s in the dark percussive undertow of ‘Batuka’ (performed here with the mighty Orquestra Batukadeiras) or the lilting ‘Killers Who Are Partying’. During this final act the music really flows, particularly in ‘Crazy’, a swaying trippy song about desire that has the dancers creating elegant shapes or flinging themselves prostrate around Madonna, the Queen Bee. Ah, this is their Vogue moment.

The show finishes with a gospel-charged ‘Like A Prayer’, the anti-gun anthem ‘I Rise’, and the unfolding of a beautiful rainbow curtain. Madonna exits still singing, through the stalls, followed by her dancers. Fans reach out. “I touched her, I touched her!” one man says, with tears in his eyes. Madonna has found a new place for herself, creating in Lisbon a world and a community that is post-star, a kind of self-imposed exile from the postmodern icon she was and the music industry that she fought so hard to conquer. Now at 61, with bad knees and salty humour, she wants to keep pushing forward but in a way that is forgiving of herself. “There should have been more hits,” someone grumbled, but it’s her embrace of the new that makes this show so lyrical and vivid. I, for one, loved the surprise.

More at The Quietus