Madonna and her Rebel Heart….that there was going to be a true iconic promo tour this time, was confirmed quickly. After the Grammy’s, Brit Awards, Jonathan Ross and Che Tempo Che Fa she was a guest at Le Grand Journal in Paris. 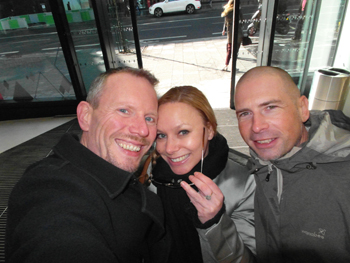 Slept only two hours (I can pull this off, no problem at all), then took off by car with Hans at 4am to Paris. Thanks to a good navigation system we had no problem finding the studio’s. We arrived at 10am so were way too early (as usual). I informed at the security desk where to park our car, thankfully we were able to park the car in the garage of the studio’s. It was very windy in Paris, now we just had to wait for Fred.

Had a nice cup of coffee and tea at a nearby Italian restaurant, and needed to restyle my hair. A six hour drive does bad things to a hairstyle and of course I’d taken everything with me to Paris except for a brush and clippings for my hair. So decided to do a braid, which also didn’t quite work out….but oh well. After sipping my tea, we went out to wait for Fred. The windy weather had turned into a rainstorm so we were very happy when it didn’t take Fred long to find us. Decided to return to the Italian restaurant and eat a nice hot meal, spaghetti Arrabiata.

The doors to the studio would not open before 16.00, so made plans to do a bit of shopping near the Eiffel tower. When we later returned to the studio’s a queue had formed already near the entrance, these were fans that won tickets through competitions. Thankfully when the doors opened it didn’t take long for us to get inside. Due to the extra tight security, we had to give our passports, sign a form, put all of our belongings in the wardrobe and were scanned. Now the waiting continued at the entrance of the studio, thank god it was warm inside. 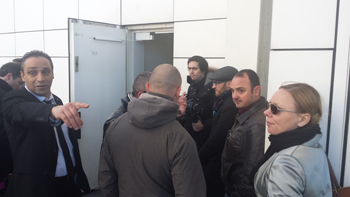 Madonna wouldn’t be Madonna if also this part of the waiting seemed to go on and on forever. We were still waiting when the clock hit 17.30. M was busy with her soundcheck and ‘her’ people were walking by every now and then. When we finally received the sign for entrance, we were escorted to one of the best seats in the house. Right near the table where M was to give the interview and right in front of the stage.

You know the deal with television shows, you’re being told how to applaud, how to scream, basically how to create noise in general. I had a chocolate bar with me (as I am always hungry) and had put it in the pocket of my dress. But due to the heat in the studio it started to melt. To prevent a total wreckage in my pocket I decided to eat the thing at once. Yeah I cleaned up after that. The host and guests sat down at the table and M’s back up singers hit the stage. The band and dancers followed quickly. Butterflies started to fly in my stomach, yes it was almost reality. Time to see M again. The audience stood up, everyone was clapping until their hands hurt. 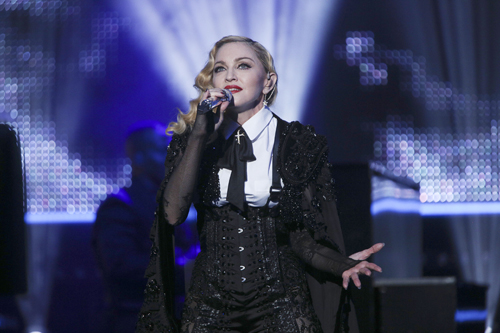 Eventually she was there, complete in bling she looked sensational. She first performed a remix to Living For Love with a stunning Vogue-like choreography. After a quick wardrobe change M returned to sing Ghosttown. M was however not very pleased with her performance and told her crew ‘their clapping is confusing me’. Ghosttown was performed a second time, but the clapping was still very much there. M seemed to be pleased after the second performance and left the stage once again for a touch up. The performances were to be added to the live show in the end.

The live show started and M was introduced. Unfortunately in France English guests are still being overdubbed live on television, making it very hard to hear what M is saying. I remember this also being the case at Absolut Madonna in Cologne in 2003. M truly looked stunning, she just shone, she sparkled. She was the chief editor of the show and it was going to be very political. M did speak about Marine Le Pen and the dark cloud following her during the MDNA Tour in Europe (Pussy Riot etc). The most impressive moment of the show was the Charlie Hebdo bit. She was truly taken aback, and it never gets easier seeing her cry. It was a very emotional moment in the studio.

A few tiny fun details: whenever there was a clip shown on the screen, M’s team quickly ran on stage to give her a touch up. Her stylist B. Akerlund was not happy with how her gloves were fitting, M however pushed her away and said ‘stop it!’ Andy Lecompte gave her a touch up and she gave him the cutest smile I have ever seen. At one moment the crew of Le Grand Journal asked M to leave the stage for a bit to which she replied ‘they’re kicking me out’.

When the show ended almost immediately everyone in the studio was escorted out. However I was told to stay in my seat. Security wasn’t happy with me and told me over and over to leave the studio. I can try and argue with them but they didn’t speak a single English word. Suddenly when I stood up I was told by someone speaking English ‘Kimberly, stay here, I got you covered’. Didn’t know what to think right then and there. I mean A) how do you know who I am and B) what is going on here? Immediately forgot the fact I had to pee badly and was extremely hungry.

She phoned with someone and told me she was informed of two people (Hans and me) but Fred and Alex were with us too. Of course we asked if they could come along with us. She continued her phone call and quickly got the green light that Fred and Alex were welcome to come along, to whatever the hell was going to happen. Security kept on giving us a hard time, who are you? where are you going? It wasn’t until we were finally given our green wristbands that we got to follow the lady: yep you guessed it right, we were on our way for a meet & greet with Madonna!

At that moment you truly don’t know what to think, we were extremely nervous. We were led to a hallway that ended in this cafetaria like tiny room. When I entered I bumped into Guy Oseary, who gave me a hug immediately and didn’t seem surprised to see me at all. In this tiny room there was a red cloth with a camera set up. We still didn’t know what was going to happen exactly, but I can tell you we were DYING.
Someone told us to go back to the hallway and wait in another room where some lockers were. The competition winners were already in the room, I just waited at the entrance. Suddenly totally unexpected Madonna walked by. We weren’t expecting to see her at all, so imagine our total and utter shock. She looked STUNNING, total perfection!

Only a few seconds after this I was told that my ‘group’ got to go first. Fred led the way, stressed out. Right before we got to enter the little cafetaria like room, we saw M getting a touch up. The door opened for us, we walked right by her and were told to go to the red cloth in front of the camera. I noticed Fred was really nervous and said to him ‘chill’. A totally welcomed calm came right over me and my nerves were gone.

M turned to us and walked up to two guys first (that I didn’t know) she shook their hand and then turned to Hans. He introduced himself to her and she tried to repeat his name, she didn’t quite succeed. M was then turned into my direction and was told ‘this is Kimberly’ I reached for her hand, shook it and introduced myself ‘Hi, I’m Kimberly, I’m from Amsterdam, how are you’. She was then shown my arm ‘you signed her arm last year’. M grabbed my arm and said ‘oh woooow’. I told her ‘yeah I got it tattooed right after’. Hans then remembered he had a sig as well and started to undress himself in front of her to show. However he had trouble getting his shirt unbuttoned so I said to M ‘I’ll help’ and finally Hans got to show his sig as well. I turned to her and said ‘we’re just a bunch of crazy people from Holland’ (yes of course Kimberly, make a fool of yourself why don’t you). Fred showed M his Maverick tattoo and spoke to her for a bit. She then shook Alex’ hand.

M returned to us for the picture. Hans was told to stand behind her and I was told to stand to her right. Fred and Alex stood to my right and the other two guys on M’s left. I held my wallet in my left hand and my right arm was just hanging there, so decided to place it on her shoulder for the last two pics (oh yeah….just go with it). The photographer told us to get a little bit closer together, making me cuddle up to M to which I replied ‘ooooh I don’t mind at all’ and M laughed. Kimberly, can’t you just ever shut up? I have stood next to her before, but never this ‘cozy’. Three pictures were taken, of course it seemed we were all promoting a new toothpaste brand as our smiles couldn’t be any bigger (M stuck out her tongue in one of them). The photographer ordered us to take one crazy picture, I think I just continued to smile, couldn’t wipe it off my face. When the pictures were taken, we had to leave quickly as there were more winners to meet & greet her. I turned to M and thanked her, of course without question I managed to trip over one of those studio lights….great way to make an exit doll!

I was in a completely different reality zone than all the others around me, it was kind of like M’s infamous ‘fuzzy dreams’ moments. When I saw cake and coke I couldn’t help myself and completely stuffed my stomach with it. Everyone was going crazy and I just remained very calm. So hard to believe what just happened here. Did I really just take a pic with M? Now I did remember that my boyfriend Dirk was teasing me for weeks with a planned ‘surprise’, but I had no idea what is was going to be (duh it’s a surprise) This indeed turned out to be Dirk’s doing, no idea how he managed this (but I will find out).

We picked up our jackets and made our way to the car. We said goodbye to Alex and Fred and immediately called my mother and Dirk ‘you never guess what just happened’. But of course Dirk already knew. Filled with adrenaline we made our way back to Amsterdam. I arrived at 2.30 and immediately slept after being awake for a full 24 hours.
To be continued…… 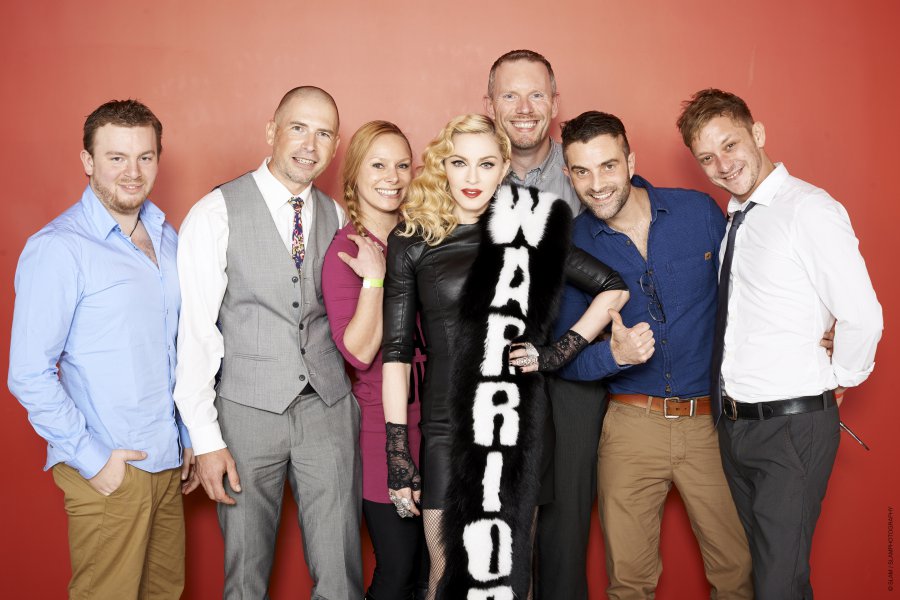