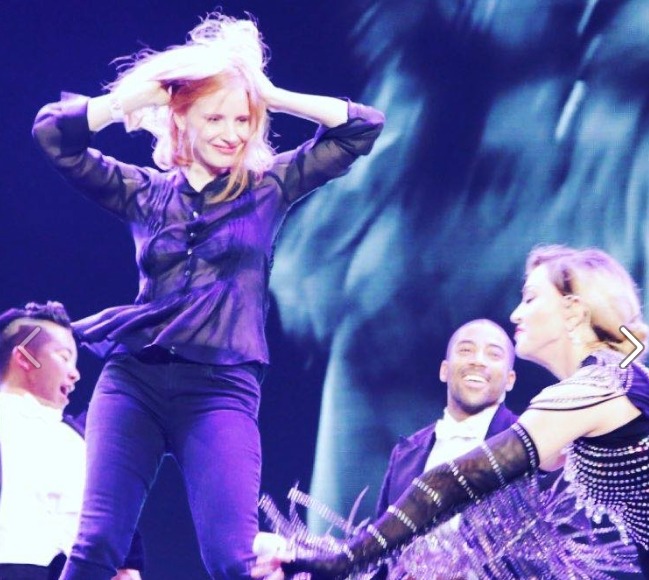 [Credit: Instagram @madonna]
Acclaimed actress Jessica Chastain can add another laurel to her résumé — she has become the latest of Madonna’s high-profile “unapologetic bitches” to dance with the Queen of Pop onstage during her $50 million-grossing (so far) Rebel Heart tour.

At a Saturday show in Prague, Czech Republic, Chastain was pulled from the audience to dance with Madonna to the reggae-flavored song “Unapologetic Bitch” from her “Rebel Heart” album. Chastainswiveled her hips and impulsively spanked Madonna, who crawled on all fours in front of her.

Madonna’s most recent A-list invitee to her stage was Katy Perry, last month. Others have included Anderson Cooper and Amy Schumer.

Chastain is in Prague filming “The Zookeeper’s Wife,” adapted from the Diane Ackerman book about the diaries of Antonina Zabiński.

This wasn’t Chastain’s first encounter with her idol; in 2011, Madonna presented Chastain with the Gucci Award for Women in Cinema while the two were in Venice for the Venice Film Festival.