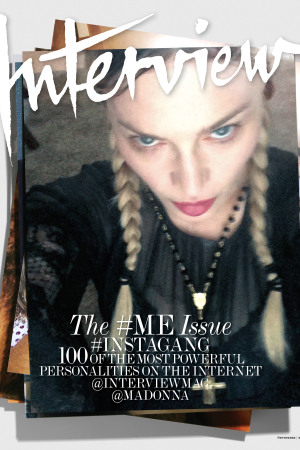 Interview is taking inspiration from the “selfie” and fashion’s obsession with social media for its September issue. The magazine, which was founded by Andy Warhol, has melded its heritage of the portrait with technology, to create an Instagram-themed issue featuring eight alternative covers that are essentially self portraits of some of today’s most popular social media celebs. The magazine asked Madonna, Miley Cyrus, Victoria Beckham, Kim Kardashian, Jennifer Lopez, Selena Gomez, Zayn Malik and Mert Alas to take their own cover shots. In addition, Interview tapped 150 social media stars from fashion, entertainment and music to do the same thing for a portfolio inside the magazine.

“We just asked people to imagine their ultimate self portraits — whether it was highly produced or a simple selfie,” explained Interview editor in chief Keith Pollock. “We wanted to see how they see themselves and how they want to be seen. We allowed each subject to imagine their own shoots.”

The magazine will go on sale this week, and images from the portfolio — including covers — will be posted on Instagram starting today. Using the hashtag #InterviewGang, Interview will roll out images over the course of the month on its Instagram account. Meanwhile, the subjects involved in the portfolio will post their own photos on their personal Instagram accounts today using the same tag.

The social media strategy around the issue is part of the overall project, which is both promotional and an exercise in showcasing the power of social media.

“The intention of the portfolio was not to boost our Instagram followers or generate Web traffic — it will be a result of what we’ve done but it wasn’t the origin,” said Pollock, who explained that he and editorial director Fabien Baron derived inspiration from Warhol, himself.

“We are conscious of our heritage. Andy did selfies 50 years ago. He’d be doing selfies if he were alive today.”

The team tapped Instagram chief executive officer Kevin Systrom to write a piece that includes an interview with journalist Chris Wallace, as well as thoughts on social media and Warhol’s legacy. (Pollock noted that there’s no sponsorship between Instagram and Interview but expect a partnership down the line.)

Baron told WWD that the idea of branding oneself through social media, coupled with the fashion industry’s fascination with Instagram, was at the heart of his decision to focus on this theme for the issue.

“You really understand what people are about,” Baron said, referring to the kinds of pictures that came back; some were highly produced, while others were “raw.”

“It’s interesting for Madonna because she didn’t give a sh-t,” he said, noting that she snapped a few quick selfies between rehearsal breaks while she was on tour.

This contrasted with Jennifer Lopez, which took a more glam selfie of her posed seductively looking in the mirror.

For Cyrus and Kardashian, two extremely active Instagrammers, Interview did Facetime photos, instead, in order to add a more surprising element.

Baron returned to the question of the issue, and addressed why Interview decided against dedicating the issue to longtime editor in chief Ingrid Sischy, who passed away in July.

“We didn’t have time to do a tribute to her. We really couldn’t organize it [quick enough]. Myself, I would have dedicated a full issue,” Baron said, noting that he did mention her legacy in his editor’s letter. He added that the idea of doing half an issue dedicated to Instagram and half to Sischy seemed in poor taste.

Although Interview’s history with Sischy had been tumultuous — in 2008 the editor in chief resigned with her partner Sandra Brant, who served as ceo, president and publisher. Brant sold her 50 percent interest in the company to her co-owner ex-husband Peter Brant. Baron described a “tense” meeting between Sischy, Brant and then editorial director Glenn O’Brien amid the masthead shakeup.

Looking back now, Baron said Sischy handled the transition with “class” and that he felt compassion for her, even though his direction for the magazine differed from hers.

“She really, truly made an impact as an editor in the world of fashion and to the industry. She connected some dots between the entertainment, fashion and art industries,” he said, adding that his relationship with Sischy had improved, becoming friendly in recent years. “I thought one day Ingrid and I would have sat down and ticked at the boxes, that we could…but now I can’t. There are things that are closed, and I regret that.”

Baron said before he penned the editor’s letter found in the September issue, he wrote a letter dedicated to Sischy.

“I may post it on Instagram,” Baron mused. “I’d like to do something more for her. I hope to in the future. We just couldn’t turn it around in time.”