Inside the Premiere for Madonna’s New Concert Documentary Madame X 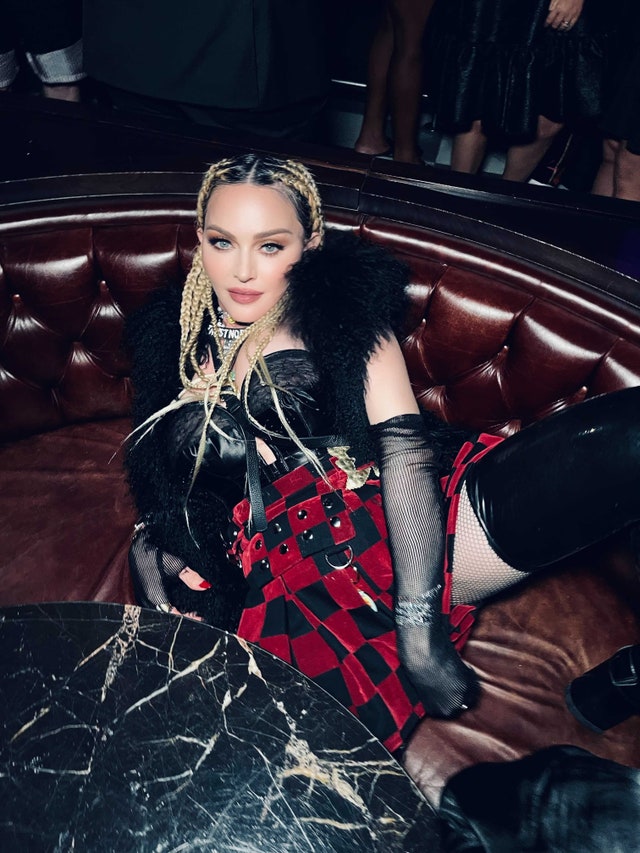 It was once said that a queen is never late—everyone else is simply early. Never was that more true than Thursday night at The Edition Hotel‘s Paradise Club in Times Square, where Madonna presented an intimate screening of her new concert documentary film, Madame X. A slew of New York’s finest—including Drew Barrymore, Jeremy O. Harris, and Antoni Porowski—turned out to toast the Queen of Pop until it seemed like everyone in town was there except the host herself.

Arriving fashionably late in a black lace bustier, a gold-plated necklace that declared “Trust No Bitch,” and a diamond tiara that read “Fuck You,” Madonna certainly made an impression once she finally made her grand entrance. The 63-year old superstar has been fine-tuning the edit for her new documentary since the inception of the Madame X Tour, which launched during the fall of 2019 before ending abruptly in March 2020 due to the ongoing pandemic. Filmed over the course of her sold-out, 16-night run at the Brooklyn Academy of Music, the intimate tour marked Madonna’s first time performing at smaller theatre venues since her debut concert tour in 1985. Since then, she’s almost exclusively played arenas and sold-out stadiums, with the Madame X shows allowing the pop icon the rare opportunity to reconnect with her fanbase on a more personal level.

“Every night on the Madame X Tour, I did a show with just a couple thousand people, which is really quite small for me,” Madonna told Vogue. “I could interact with the audience, and no one had phones, so people couldn’t take pictures—there was nothing between me and those crowds.”

The vibe at the premiere event was similarly intimate, with a room consisting of Madonna’s friends and family, including sons Rocco Ritchie and David Banda. She even paused her opening remarks to go embrace a group of background dancers she spotted in the audience (“Oh hey, those are my friends!”). Ketel One’s Vodka Martini Bar–featuring Madame X-inspired cocktails–kept the party going long after the screening ended. And with Madame X set to stream on Paramount+ starting October 8, fans everywhere will get the chance to relive one of the most thrilling artistic chapters in Madonna’s career yet.

“This tour was one of the most incredible experiences of my life, so I needed to document that: the process, the rehearsals, the show itself, what was going on in my mind,” she elaborated. “It’s different from any other concert documentary I’ve done before because it’s a different show and represents a different time in my life. But don’t take my word for it; you’ll see for yourself soon enough.”