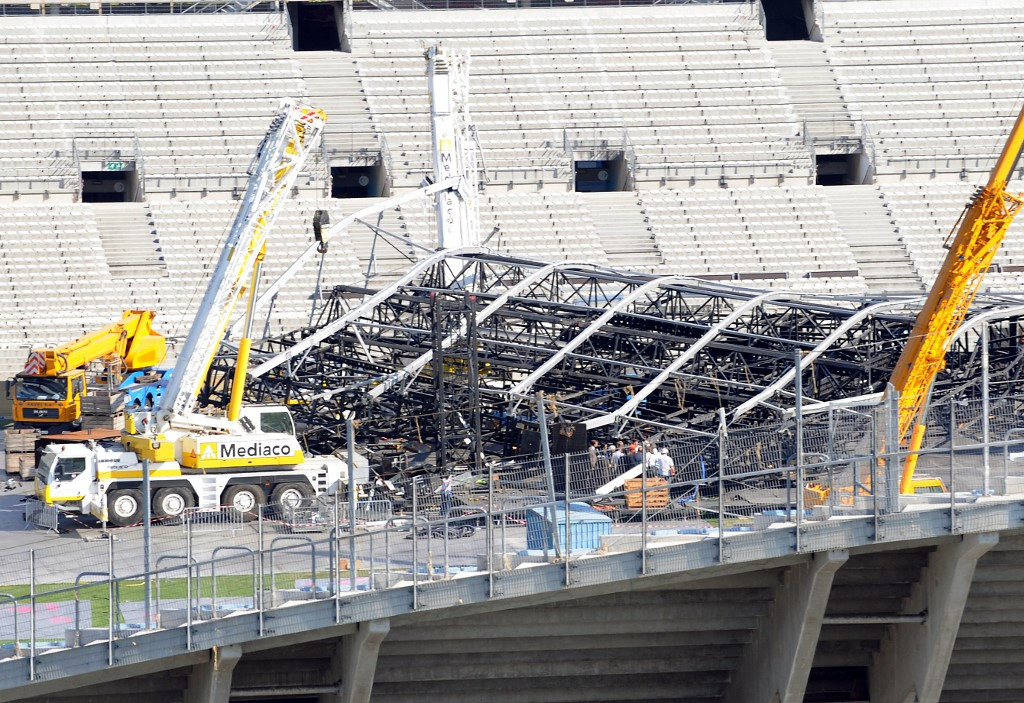 In this file photo taken on July 29, 2009, shows the Marseille’s Velodrom Stadium after the collapse of a stage set up for a Madonna concert. Two workers died in the accident on July 16, 2009 and eight were injured, one of whom committed suicide two years later. (AFP/Michel Gangne)

It took 11 years, but a trial stemming from the fatal collapse of a stage being set up for a Madonna concert in the southern French city of Marseille finally got underway on Wednesday.

Two workers died in the accident on July 16, 2009 and eight were injured, one of whom committed suicide two years later.

A total of eleven people and corporate entities have been charged with manslaughter, causing unintended injuries and several breaches of the labor law in connection with the accident.

Madonna herself has not spoken with an investigating magistrate because she said she had nothing to do with the technical details of her shows.

The singer did present her condolences to the victim’s families.

Three days before she was to perform at Marseille’s Velodrome football stadium, the stage’s roof collapsed, killing Charles Criscenzo, 52, and Charles Prow, 23.

Giuseppe di Silvestro, who was among those injured, killed himself two years after the accident.

After a 10-year investigation, two postponements and a suspension, the trial began with tribunal president Marie-Pierre Attali underscoring “the need to pay attention to the civil parties and their loved ones, who really need this trial to take place.”

She noted that additional delays, in particular owing to the coronavirus, must be avoided at all costs.

Among the 11 defendants are Live Nation France 2006, which organized the concert, the Edwin Shirley Group (ESG) which owned the stage, Tour Concept France which helped set it up, Mediaco, a company that owned a crane implicated in the accident, and Scott Seaton, a British national hired by ESG as a foreman.

He was present Wednesday, as were the head of Tour Concept France, Mathieu Anton, and Gerard Billia, head of Mediaco.

The others were represented by their lawyers.

The trial is expected to last until October 16.