Madonna’s Truth or Dare reveals her as she really is, on stage and off- the mother to her family of dancers, sex goddess to her millions of fans, businesswoman, singer, dancer… the biggest star in the world of music.

Join her experience and intimate backstage look at her “Blond Ambition” tour. From her hotelroom to her dressingroom, from her stage show to her boudoir, here is Madonna outrageous, hilarious, uninhibited.

See the truth. Madonna dares you.. 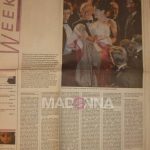