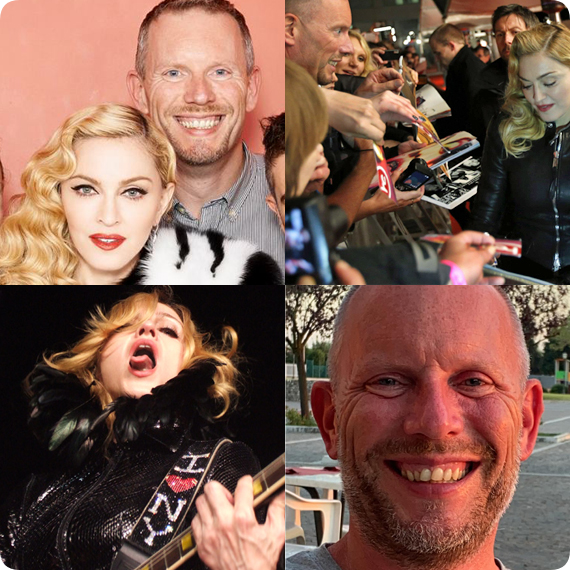 Favourite Movie: Who’s That Girl, have seen it over 80 times and know every line by heart

Favourite VHS: The Virgin Tour LIVE!, my first ever VHS and completely devoured it

Favourite DVD: Swept Away underrated film and oh so funny

Favourite item in collection: Dutch withdrawn Pepsi promo CD for  “Like A Prayer” by Vrumona

When did you became a fan?: July 13 1985 Live Aid, have seen the performance countless times

First time you saw Madonna live: Rotterdam August 25, 1987 Who’s That Girl Tour, all the way in the back of the stadium. Until this very day I still get the chills when hearing the opening chords to “Open Your Heart”

Favourite Madonna memory: meeting Madonna at Hard Candy Fitness in Berlin where she signed my arm

How many times have you seen Madonna:

Favourite releaseparty in FAME/Concerto: Hard Candy release party, everything was on point, we had a great time

Favourite MadonnaUnderground memory: the two meetings with Madonna and photo passes to the live shows, unforgettable and precious moments

Final thought/comment: 15 years of Madonna underground have gone by in the blink of an eye. I remember the day we started to built this website like it was yesterday. Not as involved anymore as I used to be, but still active and working on Madonna’s discography