A timeline of the wildest MTV VMA moments of all time 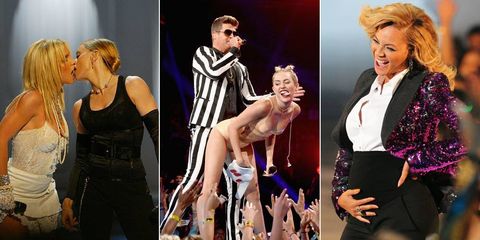 With the coronavirus pandemic meaning the majority of us are confined to our homes and practising social distancing right now, celebrity award shows are obviously not going ahead this year.

We’ve already waved goodbye to the Met Gala, and are anticipating the cancellation of the 2020 MTV VMAs, which usually happens in August. Which is gutting, not least because the Video Music Awards is typically one of the wildest of the lot.

We’re talking Britney’s performance with that snake, Kanye West crashing Taylor Swift’s stage and a mic drop from Beyonce in the shape of a baby bump. Here’s a timeline of the wildest MTV VMA moments ever, in lieu of this year’s ceremony going ahead.

Early on in her career, the singer descended a 17-foot-tall wedding cake and sang ‘Like A Virgin’ in a white wedding dress – something which Madonna’s former manager Freddy DeMann thought would ruin her career.

“He was white with anger, he was so upset,” Madonna told Jay Leno in 2012. “He said, ‘That’s it, you’ve ruined your career’ … I didn’t even know that my butt was showing. I couldn’t compute everything that had happened. And since I didn’t really have a career yet, I didn’t feel that I had lost anything.”

What would a VMA round up be without that moment between Madonna, Britney and Christina at the 2003 awards? The trio were singing a mash up of Madonna’s songs ‘Like A Virgin’ and ‘Hollywood’ with Missy Elliott, with Christina and Britney in wedding dresses, harping back to Madonna’s 1984 performance.