After two years I am finally able to add another date to my Madonna list. It had become an annual tradition for me to see Madonna in person at least once a year. After Sticky & Sweet in 2009 it became rather quiet around Madonna, she was very busy working on her second director’s project, filming W./E. (her director’s debut was Filth & Wisdom). There wasn’t really a chance for me to plan a trip to see her, it was quite a change for me, for once I went on a regular holiday instead of a Madonna related one.

Madonna finished her W./E. project in 2011 and presented the movie in Venice and in Toronto, quickly we learned that the film would be screened at the BFI festival in London on October 23. I had my doubts wether I was going to attend as it wasn’t 100% confirmed she would be there in person. But of course when you think about it, she had to attend, she would’ve been criticised for not supporting her own movie otherwise. This to me was enough of a confirmation that she would be there and I bought the tickets. I chose seats in the stalls in the back, which I later regretted thinking that front row would’ve been better if she was going to sit down for a Q&A.

By now it was confirmed, Madonna had arrived in London and would be attending the official UK premiere in the Empire Cinema on Leicester Square.

Early morning fans were already at the cinema waiting for Madonna’s arrival later that day in order to possibly get a good photo and autograph. The gates were there but yet had to be set up, the W./E. billboards and posters were there too. For October it was a very nice day with a temperature reaching 24 degrees in the sunlight. As the day went by more and more fans gathered at Leicester Square. The press was there to film and interview them.

At six o’clock it was severely crowded at Leicester Square and those not there for the premiere had to walk around the square in order to get to their destination, the entire area was sealed off.

We waited at the entrance with our ticket until we were let in at 18.45. We walked the red carpet and entered the Empire cinema. After checking our ticket we were being shown to our seats. We did not get a goodie bag as we did with the I’m Going To Tell You A Secret premiere but a bottle of water and chocolate bar instead. When I turned around, to my excitement I discovered that Madonna’s chair was right behind me! Pieces of paper were taped to the chairs to show where the invited were seated, Madonna’s was just behind me!

Being absolutely delighted that I didn’t book a front row ticket but this one instead, it dawned on me that she would be sitting behind me during the entire movie. More fans found out and it became a popular spot to take a selfie. After 30 minutes everyone was seated in the sold out cinema and Madonna was introduced. She was surrounded by security, Guy Oseary and Liz Rosenberg. Everyone rose from their seats when she made her way down to the stage. Flashes were going off like crazy, it was great to see her again, it had been a while so it was quite exciting. The hysteria from before is gone, the admiration however is still here.

Madonna looked absolutely brilliant in a tight black dress and her hair in a lovely blond curl. Madonna introduced the film saying she had more butterflies in her stomach than she did when she was in Venice or Toronto. She stated that English crews are the best and she then introduced some of the cast while they entered the stage. She looked nervous, but seemed very friendly and humble. Madonna said that she hoped that we would enjoy the film. It was also announced that she would be doing a Q&A after the film. I was ready with my camera in hand as she was about to pass me to get to her seat. Suddenly it became a crazy event like I am used to as everyone wanted to take her pic. She took her seat and being a bit star struck that we were this close and witnessing her every move. Suddenly someone shouted something to her about Lady Gaga to which she responded ‘lady who?!’ It was hard to forget that she was sitting behind me and concentrate on the movie. The organisation asked us to please sit down as the movie started.

The first 30 minutes the movie confused me due to the many flashbacks. But after I quickly found myself focusing on the storyline and drawn into it. What occured to me the most were the breathtaking locations, beautiful costumes and make up plus the amazing soundtrack. The acting was superb and Wally reminded me of Madonna. Some scenes took me back to Evita looking at the costumes and the general feel of the film. A very different movie from Filth & Wisdom, but one that most impressed me. You could clearly see that Madonna had worked really hard on this, done her research and put her heart and soul into it. 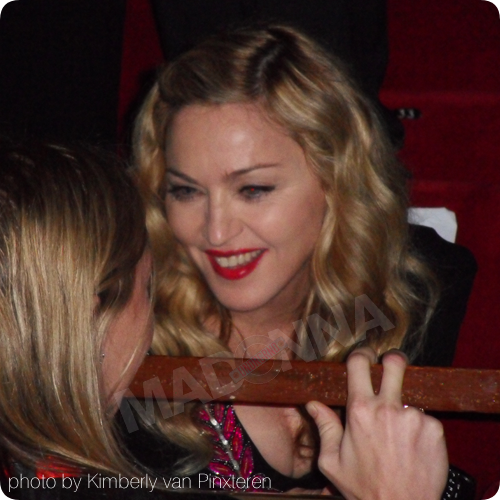 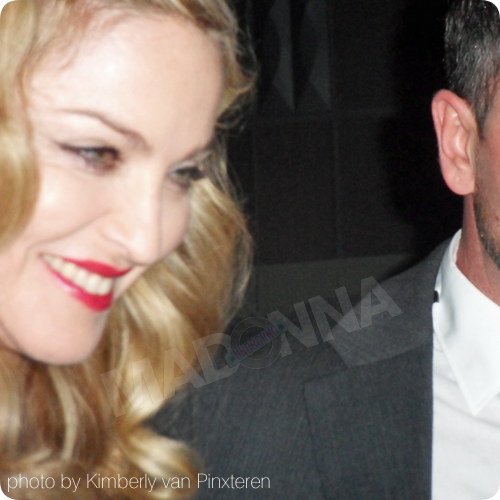 When the movie ended I got up to give Madonna a standing ovation, as did the entire room. People around Madonna spoke to her and congratulated her on the movie. Madonna accepted all compliments and spoke to everyone. I felt so blessed to be able to take so many great pictures of her. A fan next to me told her she was the queen of the movies to which she responded ‘ooooh thank you’. After about ten minutes Madonna needed to pass us by again to walk to the stage. Never before have I seen her so approachable and so relaxed.

She sat down on a chair on the stage and the Q&A started. Loads of questions were answered; she explained the use of the costumes, the three locations where they filmed and why she hired Andrea to play Wallis Simpson. She said she wanted to tell the story from her point of view. After the Q&A Madonna left using the side exit.

The premiere was over and Madonna got into her car to drive off. With pictures, video and a unique movie experience we returned to our hotel. Madonna looked absolutely fantastic, she was friendly, modest, nervous and humble. It was fantastic seeing her again and most of all W./E. A film that I recommend to any film fan that loves a good storyline and breathtaking cinematography.