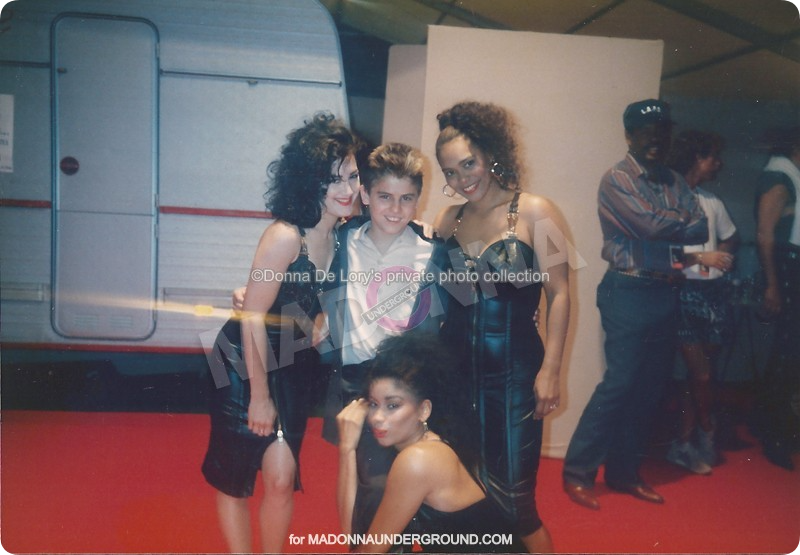 Donna De Lory has been touring with Madonna ever since the Who’s That Girl Tour in 1987 up until the Confessions Tour in 2006 and has become a very familiar face in the Madonna community. Donna has a fantastic solo career with the most stunning songs you’ll ever hear (scroll down for her iTunes music page). Since it’s been 30 years since she first started touring with Madonna, she is sharing some of her memories with us.

MU: This was your first time working on a live show with Madonna, how was this particular tour different from the other tours you have worked on with Madonna?

Donna: I was so young, ambitious and impressionable!!! All I wanted was to travel, singing and dancing and exploring the world. I felt that when I first got this job working with Madonna, my life changed completely. It was a dream come true.  I was so happy after years of working hard, to receive this recognition for my talents and years of practice.

MU: Can you tell us anything about the auditioning process for the Who’s That Girl Tour?

Donna: OOh it’s quite a story but I’ll try to make it short.

Well I got a call from Patrick Leonard…who had first heard my voice on the demo I sang for “Open Your Heart”. He told me that he loved my voice and he asked me to come in to his studio and work with him on some records he was producing. When I found out that he was the musical director for the tour, I immediately suggested that I would be perfect for it. He had told me they already hired 3 girls hired from the show,  “Little Shop Of Horrors”. Every time I would go in to work with him I would bring it up. Then one day I got the call. He said, “Donna, what are you doing today?” He told me that there may be an audition for the tour because one of the girls was not working out. I said, Oh yes, I was available and he said he would call back to let me know when and where. So I had a friend come over immediately and do my make up(red lips) and hair(black to contrast Madonna) I picked out a black and white outfit that had a Pirate/Spanish flair. I went in later that day to SIR rehearsal studios where her band was set up and I saw every singer that I knew in LA there!! I knew that I would have an advantage because I also danced. They took us up on the stage to sing with M in groups of 3. The girls that I was with were not blending too well and I thought that it was over for me. Luckily, Pat said just Donna and Madonna sing the bridge to La Isla Bonita together.  Of coarse I was very nervous standing there with Madonna for the first time. She had her back turned when we were singing. Then she stopped and said, Why aren’t you singing?? Pat spoke up for me and said that I was singing and that our voices blended perfectly together. After that they had me come back to dance with the other dancers and it wasn’t for a few days till I knew I had the job. They even secretly taped my voice while I was dancing to see if I could sing and dance together?

MU: I know you’ve probably answered this one a million times already but can you share your memory of what it was like meeting Madonna for the first time?

Donna: I was nervous being at the audition and when she walked in I did not recognize her. She had short hair and small rimmed glasses and she was wearing a suit!! Then I heard her voice and knew it was her. She was very serious and I felt that she wanted to get the auditions over with right away and get on with the rehearsals. A few days later we were standing side by side in front of the bathroom mirror putting on our make up having girl talk. Then that night, we were riding in her Limo to visit Billy Idol at his concert when her music came on the radio. It was a moment I will never forget.

MU: Do you remember once rehearsals started if certain songs were rehearsed that never made the final setlist?

Donna: I don’t remember. By the time I came in they had worked the songs out already.

MU: Was there any room for your own input? Were some of your ideas used?

Donna: When I first started to work on the tour I didn’t have much say and the concepts and music was already worked out but I would get excited about ideas and say yeah, we have to do that!

MU: Was there a certain stop during the tour that you remember most and why?

Donna: Really, every stop on that first tour made such an impression on me and my life.

The first stop was Japan. When we arrived at the airport we were swarmed with cameras and there were school girls everywhere. I loved visiting the Buddhist temples there as well.

Italy was amazing too!!! I felt like I was home there as one of my grandfather’s was from Parma.  I loved the people and the food!!! They just went CRAZY for us. 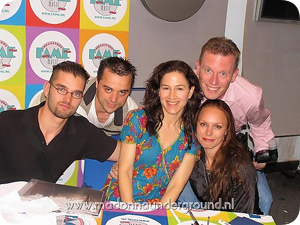 MU: What part/song of the show was your favorite and why?

Donna: The slow song that had this lyric “No where to run, no where to hide from the look of love from the eyes of pride”. It was great to see Madonna just be there with the people and sing this great heartfelt song. Everyone would hold up their lighters (not phones then). It felt like a dream as our voices floated through the air looking out onto the ocean of lights. She used to tell us how vulnerable she felt at that part of the show.

MU: Did you get the keep any of the costumes from the tour?

Donna: Yes!!! I gave some of them to friends and family….hope they still have them! I remember when I first saw the many costumes I thought.. I get to wear those??

MU: Do you remember the Rotterdam (Holland) stop of the tour? It was Madonna’s very first live show in Holland and things were crazy!

Donna: Yes it was crazy!!! We were wanting everyone to have fun and most of all BE SAFE. There is nothing like that feeling of being on stage with a great artist and all of those beautiful people!!! Thank you!!

MU: Was there a funny moment during the tour you think fans would love to know about?

Donna: We (not Madonna) had one day off in Amsterdam we were out doing our laundry when we decided to eat some hash brownies and go sightseeing.  We ended up at the Anne Frank house. I was climbing up the stairs thinking how am I going to get down these. It is a very serious historical place to be so I look forward to going back there one day.

MU: Do you miss touring with Madonna?

Donna: Some things I miss about it like being on stage and looking out and feeling all of the love from the fans. I loved to move around the world like that too (1st Class!) and it was a lot more effortless on that first tour.

MU: Which particular tour do you have the most fond memories of and why.

Donna: Probably Who’s that Girl since it was my first tour and The Blond Ambition Tour because Niki and I were a big part of the show and we really got to use our talents. It was such an exciting time in my life with the sky opening to my own artist career. The camera’s were there too filming the documentary and I felt like I was something great that would be remembered for a long time.

MU: During the Confessions Tour in Amsterdam stop you performed an instore in music store FAME, do you remember that? A huge amount of fans turned up, got to see you perform some of your own songs and after got the album ‘Sky is Open’ signed

Donna: I loved being there!!! I’ll never forget the support that the people gave to me there!!! I was there playing solo with my harmonium with all of those people. Maybe I’ll come back there and Play with Niki next year!!

MU: What are your plans for your solo carreer? Will there be more albums? My personal favorite is ‘The Lover and the Beloved’

Donna: Thank you!! That was my first Yoga Album. Yes I am working on a new Album mostly in English. Songs that are very personal to me including a Spanish song that I wrote with my Dad called “Amor Amor”  I am thinking that I would love to film a video for the song with Nick Spanos in Cuba. What do you think? (MU: fantastic idea!)

MU: You have been reunited with Niki working on a cover of ‘Rain’ which is stunningly beautiful and an EP, what was it like working with Niki again?

Donna: Niki and I are two Friends for life! When we sing together it is effortless. I love Niki and we have so much music in us to be created together. I am so thankful to all of the fans that have supported us with our music so far. I know that we will always sing together.  I am so thankful to Madonna for bringing us together 30 years ago and grateful for all of these life experiences and FOR YOU and your love and support you have given me over the years!!

Thank you! Namaste. May Love and Light fill you always, Donna

This interview with Donna De Lory was exclusively performed for MadonnaUnderground.com to celebrate the 30th anniversary of the Who’s That Girl Tour. Please don’t share without permission. 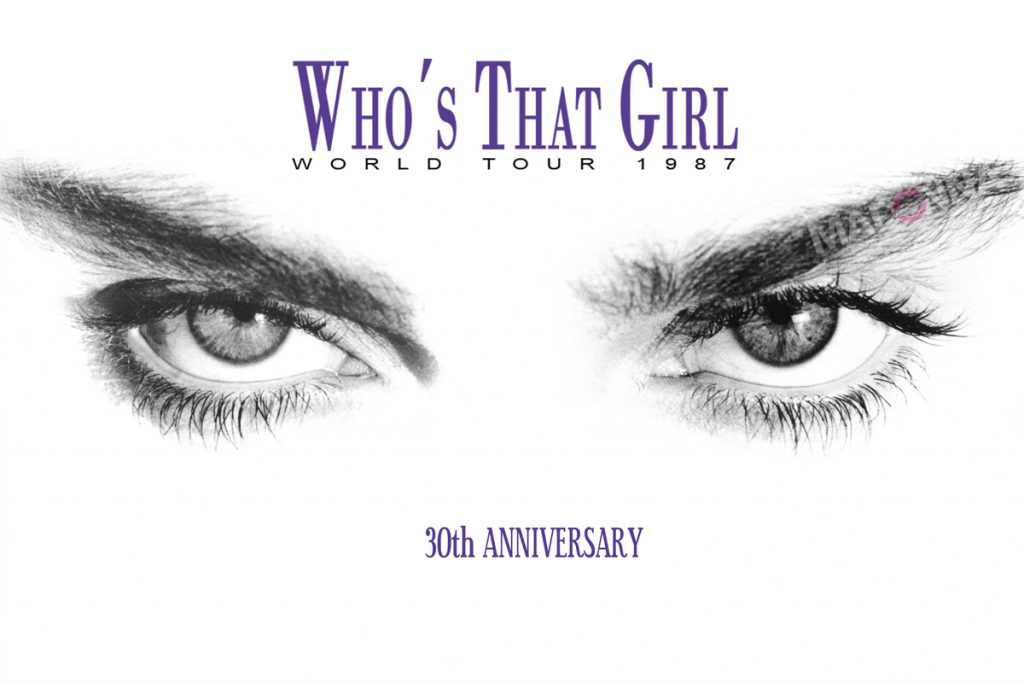 ©MADONNAUNDERGROUND 2017. No part of this interview, may be reproduced in whole or in part in any manner without the permission of the copyright owner.