Three members of the Russian punk musical collective Pussy Riot have been arrested in Sochi, members have claimed.
Nadezhda Tolokonnikova and Maria Alyokhina, along with a third, unnamed, band member, were detained and charged with theft after arriving in the Olympic city to perform a new song, Ms Tolokonnikova said.

“We were arrested on the 16th at 7 AM, on the 17th we spent 10 hours with the [internal security service]FSB, and today we are in a paddy wagon charged with theft,” Ms Tolokonnikova posted on her Twitter feed on Tuesday morning.

The group arrived in Sochi several days ago hoping to perform a new song called “Putin will teach you to love the motherland.”
Ms Tolokonnikova and Mr Alyokina grabbed international attention after a previous anti-Putin performance in Moscow in 2012 landed them with two-year jail terms.

The pair were released early in December as part of a general amnesty of several thousand prisoners to mark the 20th anniversary of the Russian constitution.

Both, however, said they would rather have finished their full sentences, accusing Vladimir Putin of using the amnesty to white-wash his government’s human rights record ahead of the Sochi Winter Olympics.

The pair say they are implacable opponents of Mr Putin’s government and said their release would devote themselves to campaigning for reform of Russia’s prison system.

But their courting of celebrity in the months since their release has caused friction with other members of the original group.
Earlier this month six anonymous members of the group attacked the pair for appearing at an Amnesty International concert alongside Madonna in New York, saying it undermined the groups principles of “only staging illegal performances in unexpected public places.”
Ms Tolokonnikova and Ms Alyokhina hit back at the criticism, saying they never left the group and that they did not know who had written the letter

Want to own a man? Madonna Tour Stage Statue from Blond Ambition Tour

‘This Touring Stage Prop comes from the 1990 Tour of Blond Ambition. It is a Statue of a Male form with his arms extended. He is made out of plywood, covered with foam, coated with fiberglass, silver-leafed and clear coated. He stands approximately 7′ tall, 5’ wide, 12″ deep & weighs approximately 40 pounds.

In addition to the provided photographs you can view him on stage during the performance approximately one hour and twenty minutes into the movie, Blond Ambition. This is a ONE of A KIND item for the True Madonna Collector who can afford the finer things in life! All serious Offers will be considered!

BMW “The Hire” Could Be Revived For The BMW i8 [Videos]

Sometimes the old tricks are the best tricks, and BMW is considering digging up their action film series to create viral chatter over their new i8.

It has been over 13 years since Clive Owen played the mysterious “Driver” who travels from place to place in a (presumably) rented BMW, as a transporter. However, what seemed like a cool premise was made even cooler by a power studded production crew and cast, including directors Ang Lee, Johns Frankenheimer, Tony Scott, Madonna, Gary Oldman, Forest Whitaker, Mikey Rourke, and Adriana Lima.

In 2007, BMW adopted a similar idea in a film series called Hammer & Coop, which featured a more comedic approach. While the parody was good, most would agree that “The Driver” was better, which is what makes the potential of a revived BMW series even more exciting.

These are speculations of what BMW is considering, so there is no confirmation if they will be able to snag Owen or any of the previous talent for another go at viral domination over the Internet. However, BMW has confirmed an action series will be rekindled in the near future, and we can only assume that their new i8 electric/hybrid car will have a starring role in a good portion of it.

In case you forget how great the 2001 “The Hire” series actually was, here are a few highlights:

The five singles off MDNA in Holland

Any one that kept up to date with MadonnaUnderground during the release of MDNA, knows that Holland was the only country to get FIVE official singles off MDNA.

Give Me All Your Luvin’ and Girl Gone Wild were the first two (so was it everywhere else), but Universal Music Holland decided to release Love Spent as a third single in Holland. The single was added to one of Hollands’ most popular radio stations Radio 538 in the maak het of kraak het category (make it or break it) where people can vote, if they like it or not. Unfortunately it was ‘broken’, people didn’t like it. Therefore little airplay….leading to a non charting single.

Next Universal Music Holland sent Masterpiece to Dutch radio for airplay and announced it as the official fourth single, just before the MDNA Tour hit Amsterdam. The single was released in order to promote the 2 shows in Amsterdam. Unfortunately no commercial success for this one either. The last official single off MDNA was Turn Up The Radio.

For all the official singles in Holland, in-house promo CD’s were pressed with picture insert and sent out to radio for airplay. These promo cd’s are 100% official and have not been bootlegged. They sometimes pop up on Marktplaats, Dutch ebay or Dutch record fairs. Usually Dutch DJ’s that no longer play the promo singles, give them to record dealers and that is how they end up on the market. Although none of these were intended for sale and a lot have been recalled by Universal Music Holland.

NEW WATERFORD — A former New Waterford man whose dream came true when he danced with Madonna on Tuesday night described the night as “electrifying.”

“There are very few human beings that can actually cause that level of excitement when they walk into a room.

“It was pretty incredible, once in a lifetime — a life-changing event.”

Boudreau, a flight attendant with Air Canada, was one of about 30 members of the Hard Candy Fitness centres Madonna co-owns around the world — including Russia, Chile and Switzerland — who won dance competitions, landing the opportunity to be led in a fitness class with Madonna during the grand opening of the new Toronto club.

Boudreau said Madonna arrived at the club at about 8:30 p.m.

“We were waiting in the studio doing warm-ups with her personal trainer,” he said.

“Then they announced a 30-second warning to clear it of equipment.”

He said hundreds of people lined the streets at the security entrances to the fitness centre and hundreds were inside the club.

“Members could be in the main gym area but they had to sign up for a special bracelet to even get close to the event.”

He said Madonna walked the red carpet, which went the entire length of the gym.

Boudreau said when the music icon walked in the studio, the room exploded.

“We were standing and cheering and jumping,” he said. “There was high, high electric energy in the room.”

Madonna told the group she had broken her foot in Switzerland. He said Madonna lead the cardio-based Addicted to Sweat class to high-energy house music that she actually works out to.

“I’m telling you the injury didn’t slow her down. She kicked ass, there wasn’t one person in the class who wasn’t dripping in sweat at the end of it.

“My shirt was so heavy with sweat it was hanging off me at the end of it. She looked fresh as a daisy.”

He said the night went well but some people behaved poorly.

“I couldn’t believe what they were doing to try to get near her. People were trying to break past security and trying to get into the room while we were there — security was tight though.”

Boudreau said after the approximately 40-minute workout that included 12 dances, Madonna addressed the group as a whole.

“She was saying, ‘How’s that Toronto? What do you think?’

“We were all screaming back the Hard Candy motto ‘harder is better.’ She’d say, ‘I can’t hear you,’ then we’d start screaming it harder and louder.”

Boudreau, a 30-year fan, said Madonna is even more beautiful in person.

“Her skin was flawless, she is very tiny — ageless, young and fit.”

This is the eighth Hard Candy Fitness that Madonna has opened across the world and the first in North America. 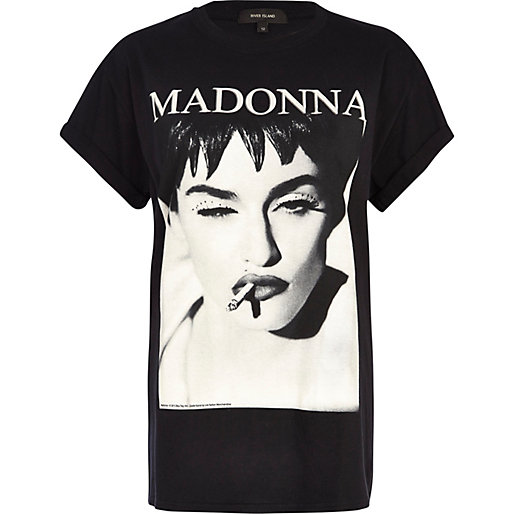 This oversized Madonna shirt is available now at River Island

€25.00 Show some love for the Queen of Pop in this vintage-inspired monochrome Madonna print boyfriend tee. Featuring an oversized fit, crew neck and short rolled sleeves.

Why Madonna Won’t Work Out to Her Own Music

Music makes the people come together, but Madonna won’t be requesting her own songs from Mr. DJ anytime soon.

“I hate my music!” the icon told ET Canada in an upcoming interview. During a segment on the 55-year-old’s exercise regimen, host Roz Weston asked about the best Madonna song for working out. Her reply may shock fans.

Of course, the Material Girl was exaggerating: Madonna clarified that though she loves her work, she’s grown weary of hearing it play over and over again. Given her more than 30 years in the business and constantly evolving style, it’s hard to blame the pop star for wanting to keep things fresh.

Still, that doesn’t mean she can’t appreciate different takes on her tunes.

“Remixes are good!” said Madonna, who recently collaborated on a mash-up with Miley Cyrus for MTV’s Unplugged. “Remixes of my music are good because they reinvent them. On Tuesday night, Madonna was greeted by hundreds of screaming fans who braved the sub-zero weather on Yonge and Gerrard Sts. to greet the Material Girl as she swept into the Toronto branch of her international Hard Candy Fitness chain, to shake her butt for the press, lead 30 hand-picked gym members in a class and declare the facility officially open.

The 55-year-old superstar looked glam, if a bit weary around the edges, in a slinky black blazer-skirt ensemble from the Canadian design team of Dean and Dan Caten, known more prominently as DSquared2.

A trademark black bustier kept her cleavage front and centre while a reasonably discreet crucifix nestled underneath. Her left ankle was taped due to an injury variously attributed to a mishap during dance and/or exercise, although to Madonna they’re often one and the same, with her patented dance workout called “Addicted to Sweat.”

“If dancing wasn’t a part of Hard Candy Fitness, I wouldn’t be here,” she said, speaking of the chain whose Toronto opening joins the roster of locations in Berlin, Mexico City, Moscow, Rome, Santiago, St. Petersburg and Sydney.
“That’s what makes my gym different from everybody else’s.”