And the sky opened up…….proof there is a G*D. #Messiah

Madonna Aiming for 2015 Album Release, ‘Having a Lot of Fun’ With Diplo 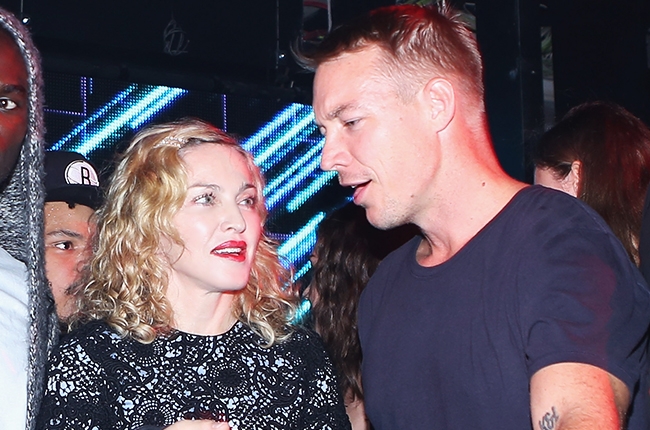 Madonna Album Update: 2015 Release, But She’s ‘Having a Lot of Fun’ With Diplo!

Madonna’s been hard at work on her upcoming new album — as evidenced by her prolific posts on Instagram — and is planning for it to be released in 2015, according to a representative.

Among those she’s working with is super-producer Diplo, who has turned up in multiple photos on the diva’s Instagram account. It’s unclear if Diplo (who recently graced the cover of Billboard magazine) is materializing as the album’s primary producer, but it would seem that he could play a significant role in the project.

When asked specifically about Diplo and his involvement in the album, Madonna’s manager Guy Oseary told Billboard, “She’s currently in the studio with Diplo and having a lot of fun,” but didn’t offer any further clues about the project. Alas.

In his Billboard magazine cover feature, Diplo said that he’s had multiple studio sessions with Madonna that have resulted in at least three “amazing, smashes.” “I got really lucky because she’s been really understanding and open to my ideas. And she’s like, ‘I hate sleeping…'”

Madonna’s next album is due out on Interscope Records, and — based on a glance at her Instagram feed — may also feature collaborations with Toby Gad, MoZella, S1, Ariel Rechtshaid, Avicii, Natalia Kills and Martin Kierszenbaum. On last week’s Pop Shop Podcast, Kierszenbaum — the head of Cherrytree Records who also records as Cherry Cherry Boom Boom — told Billboard that he was “very proud” of the work he completed with Madonna in the studio.

“It was a real privilege to write with Madonna, and with Natalia Kills,” said Kierszenbaum. “We ended up writing about seven songs. We were meant to only be there with her for a couple of days, but we really distilled it down to a very traditional writing session. It was just me on the piano, and Madonna and Natalia Kills around it, and we just wrote songs the old-fashioned way, just playing the piano and singing. … I don’t know what she’s gonna use from the sessions, but it was a tremendous honor.”

Madonna’s last release, 2012’s MDNA, debuted at No. 1 on the Billboard 200 chart — her fifth consecutive No. 1 studio album and her eighth chart-topper overall.

With my fashion bitches! #sorrynotsorry #jeremyscott@moschino#unapologeticbitch

Making records is not how it used to be! #stillwerking

Diplo trying to bounce on the session tonight! #wtf

This is my Lets Get Shit Done” look in the studio today. People are scared. If this doesn’t work i have a few other trucks! #bitchimmadonna