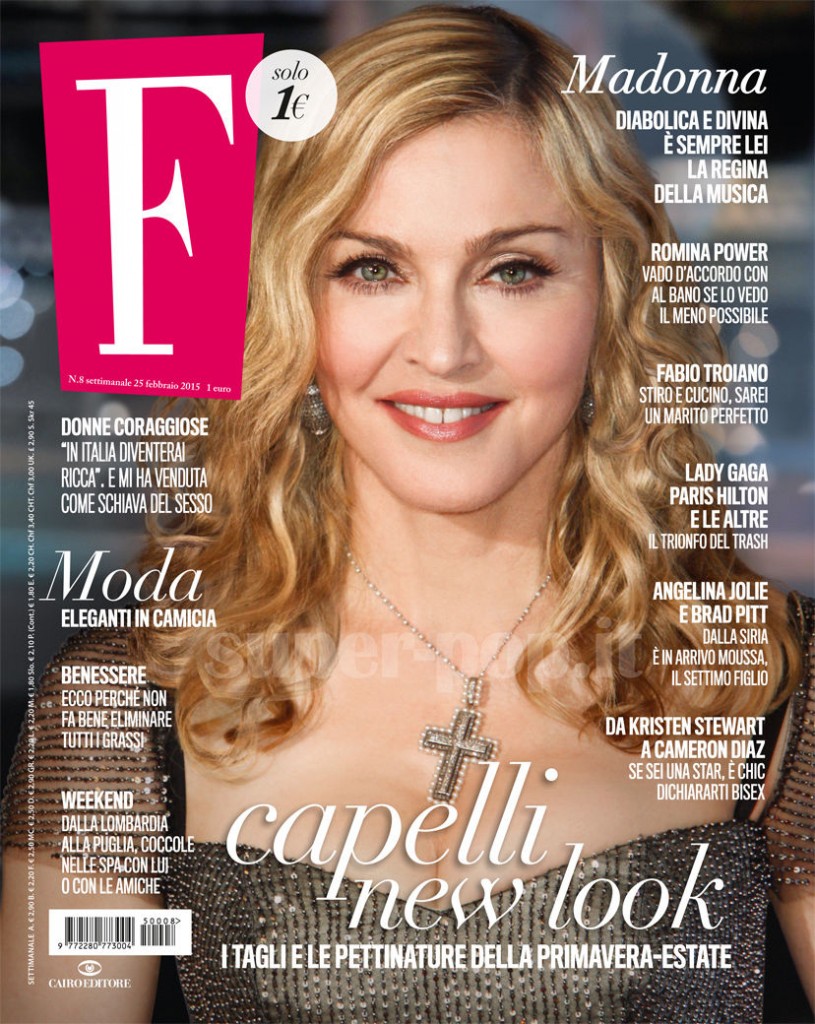 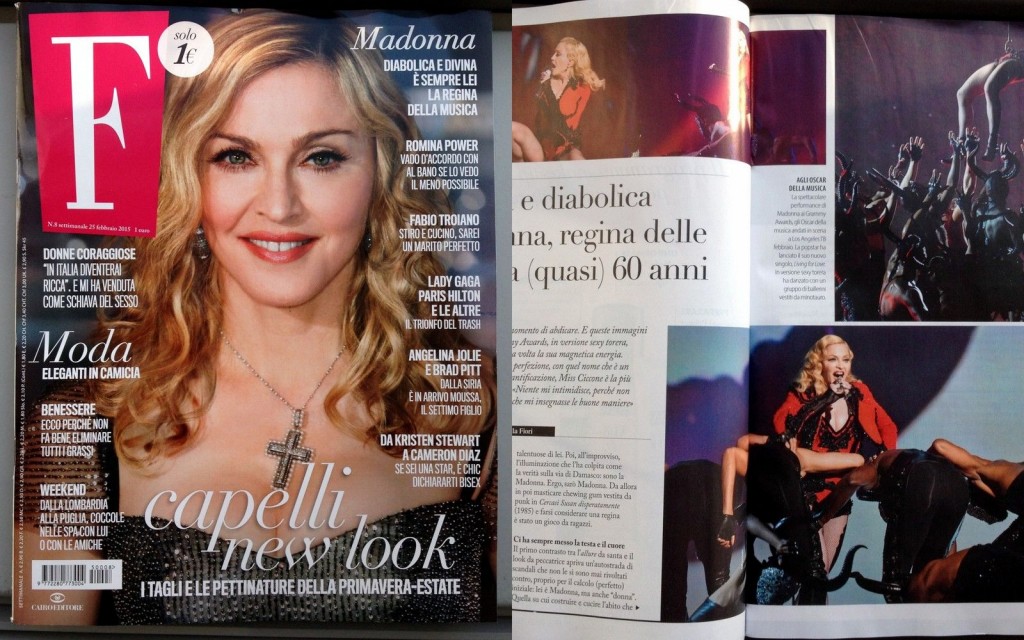 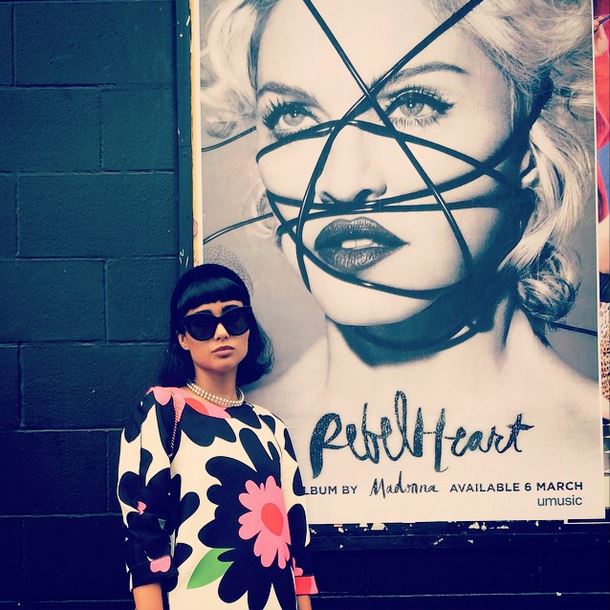 March 6th! Get ready for #RebelHeart by queen@madonna …so happy to have co-written #HolyWater(track 12) with this creative creature!

Joe Belgium is organizing a competition to attend the Jonathan Ross taping on the 26th, please click HERE for all the (Dutch) info 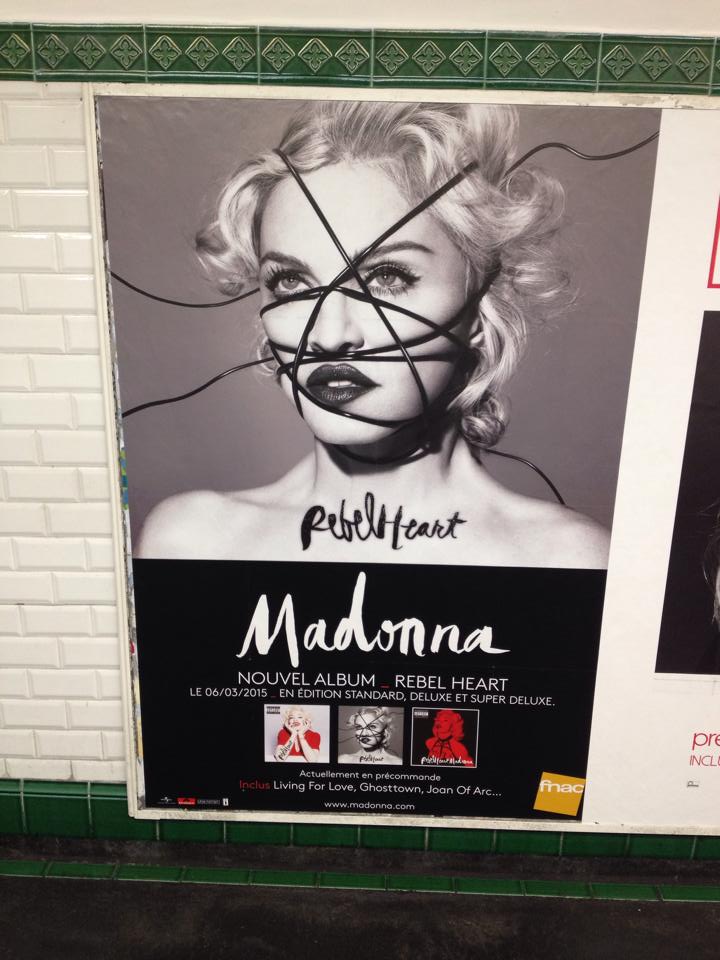 The most-comprehensive, in-depth review of Madonna’s Rebel Heart you’re ever likely to find. Gentlemen, is the Queen back? Have a read of what we thought…

The most in-depth full review of the new album

We’ve counted down all 13 previous studio albums, but here’s the big one – an exclusive, and extensive, full track-by-track review of Madonna’s Rebel Heart…

LIVING FOR LOVE
The single chosen to kick off the Rebel Heart campaign deviates a little from the leaked demo. It’s a flashback to old-school, early 1990s Madonna and could have dropped from the mixing desk of one-time go-to-guy Shep Pettibone. ‘Took me to heaven, let me fall down/Now that it’s over, I’m gonna carry on,’ she sings over Alicia Keyes’ pulsating piano before leading into a rousing chorus and a smattering of gospel house female backing vocals. It’s not a lead single with the oomph of Like A Prayer or Hung Up, but praise Jesus, it’s no Give Me All Your Lovin’ either.
Demo: ****
Final mix: ****

DEVIL PRAY
Not, as first assumed, an ode to the joys of narcotics, despite Madonna suggesting she and her beau could smoke weed, get stoned, drink whiskey or even sniff glue (are the kids still doing this?) The drugs mentioned are a metaphor for not giving into temptation of any type, set to a gypsy folk and dance beat echoing Don’t Tell Me. The opening flutes of the demo have been scrapped and producer Avicii reins in his usual balls-out default setting for a finely crafted mid-tempo melody. The end result is a chorus echoing The Animal’s House Of The Rising Sun and Avicii’s collaboration on Coldplay’s Sky Full Of Stars.
Demo: ***
Final mix: ****

Exclusive: Ghosttown to be the second single in Holland #ghosttown #madonna

After the report on Ghosttown being the second single off of Rebel Heart yesterday, we can exclusively report that Ghosttown will most likely be the second single in Holland as well. Details are being discussed as we speak. Once settled, the track will go to radio very soon.

A brand new interview will be published in the upcoming Sunday edition of German newspaper Die Welt, inform about it at your local book store. Click HERE for more info.

If you’re outside the UK on the big night, the good news is you’ll still be able to watch all the action from The BRIT Awards 2015 on Wednesday 25 February. We’re hosting a Worldwide Live Stream of the ceremony, hosted by Danisnotonfire and AmazingPhil right here on YouTube, from 8PM GMT.

Madonna has handpicked her next single off of her forthcoming Rebel Heartalbum and has chosen a ballad for her second go! “Ghosttown” has been a fan-favorite since its release so she made a lot of people happy with this choice for follow-up single… Personally I would have preferred another upbeat number before she turned to a ballad (“Hold Tight” being my first choice) but I definitely love “Ghosttown” so I won’t complain. M also has long-time collaborator Jonas Akerlund lined up to produce the video, so it’s safe to say we can expect an epic visual to accompany the release! Are you excited forMadonna’s next single choice? 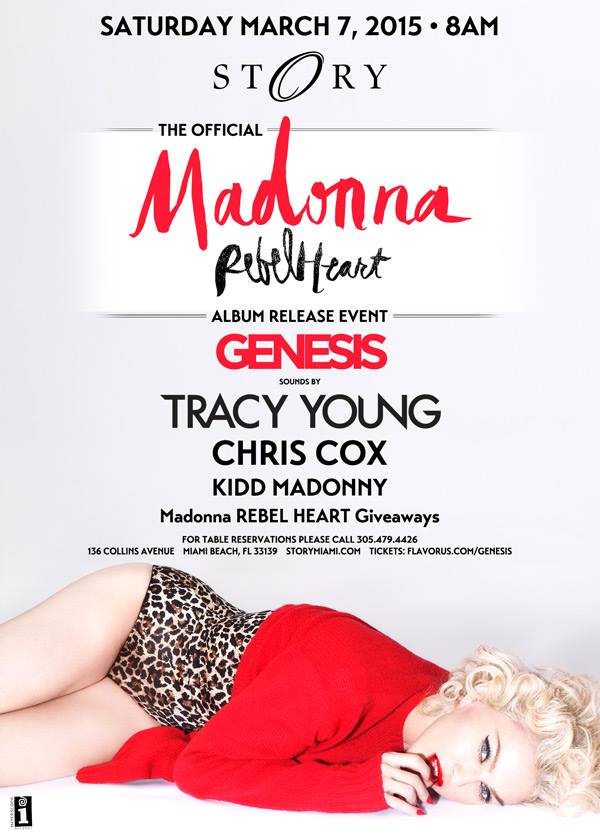 This is the STORY of GENESIS, MIAMI with a fresh time, new space and new beginning. Rise and Shine at 8am Saturday, March 7th for a spectacular light show and the sounds of KIDD MADONNY, CHRIS COX & TRACY YOUNG.

Similar as the promotions that German Amazon and Dutch Bol.com are running, MusikDK from Denmark is running a similar one. Upon pre-ordering the Super Deluxe edition of Rebel Heart you will be mailed a link to get access to a ticket sale as well.

The Sun published one of the first official reviews of Madonna’s Rebel Heart in the newspaper today, publishing a brand new promotional picture. This is the foreign edition, hence the black/white picture. 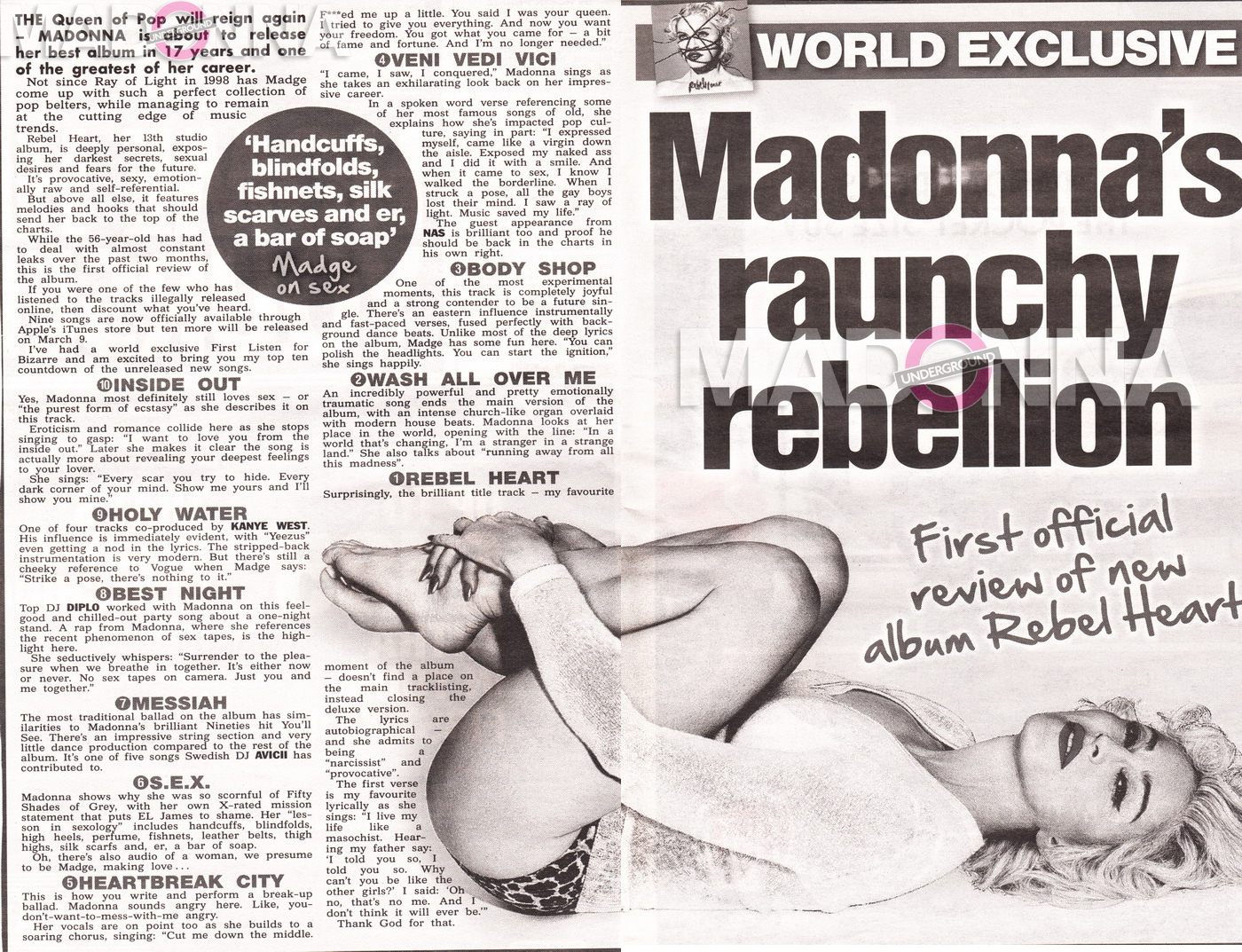 It is now also available in foreign countries. Please ask about it at your local bookstore. 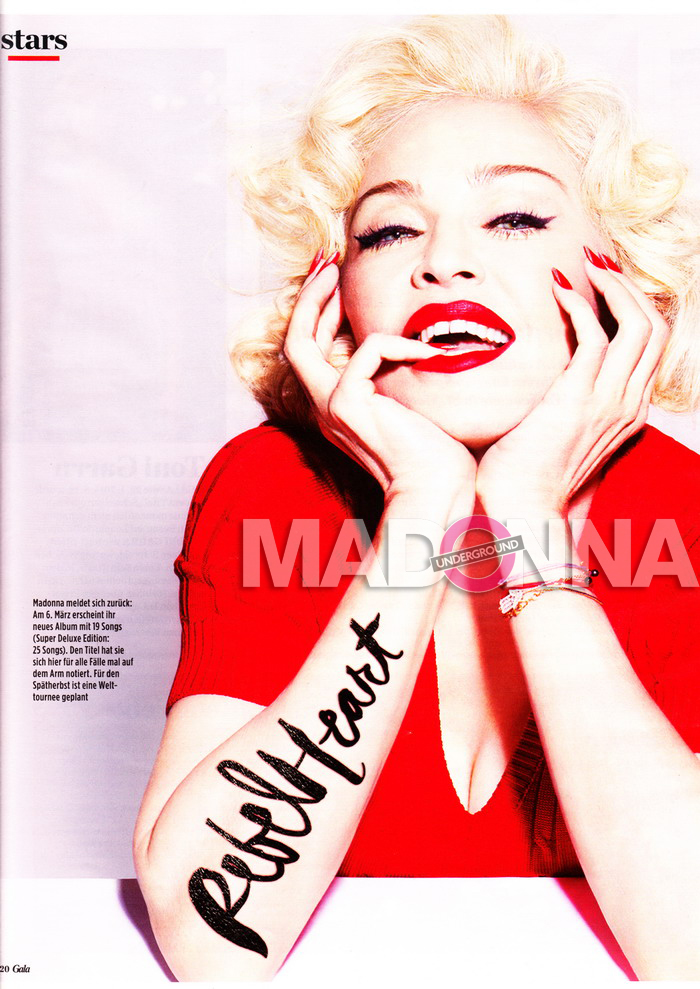 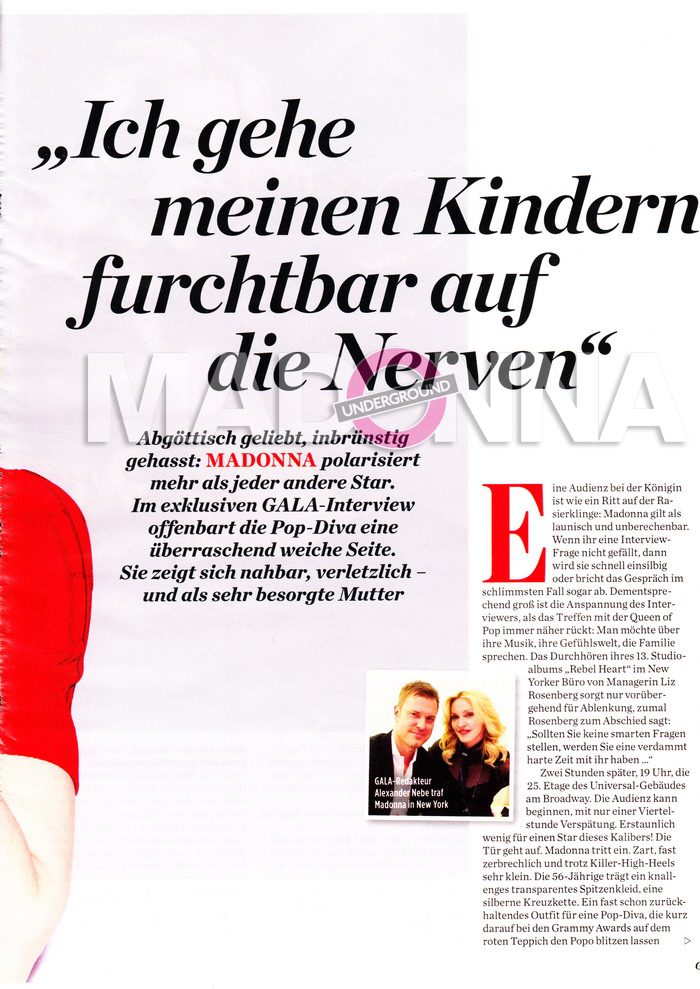 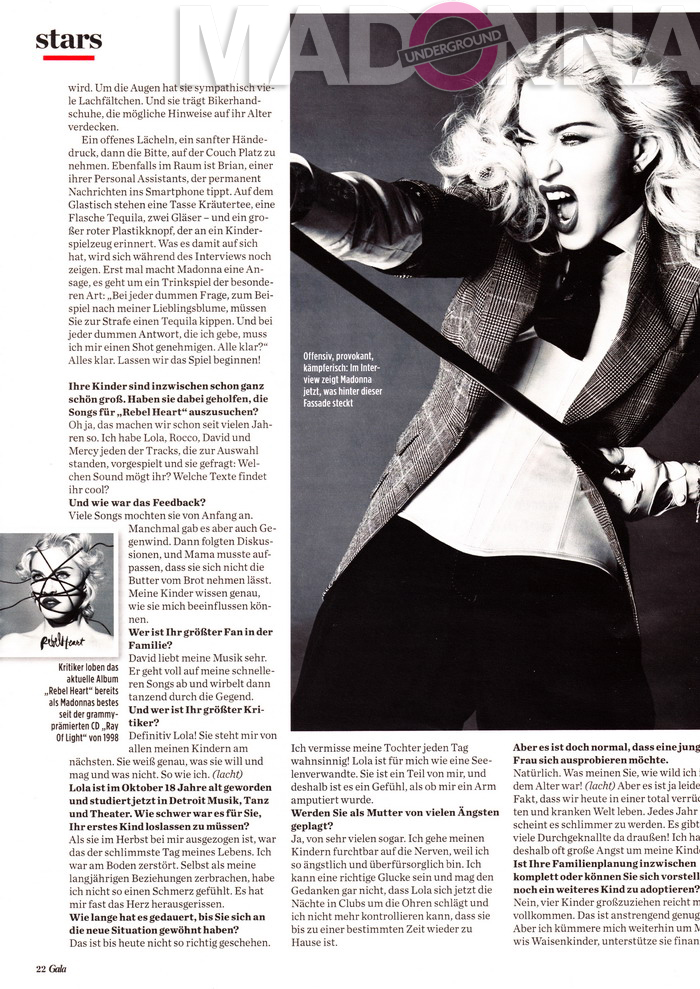 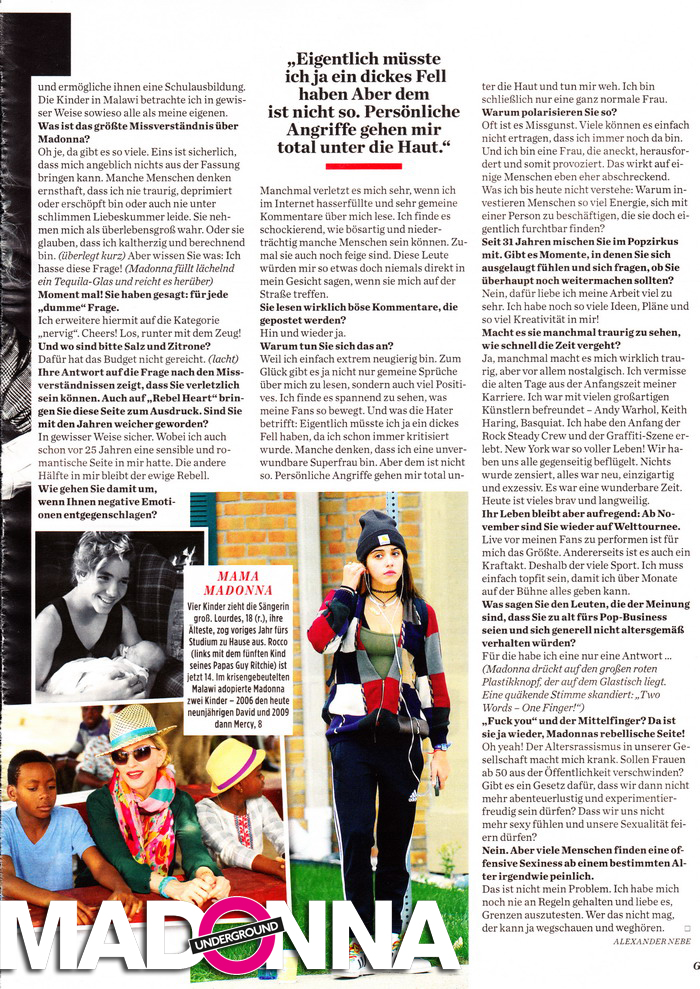 Photography That’s me in the picture (The Guardian) 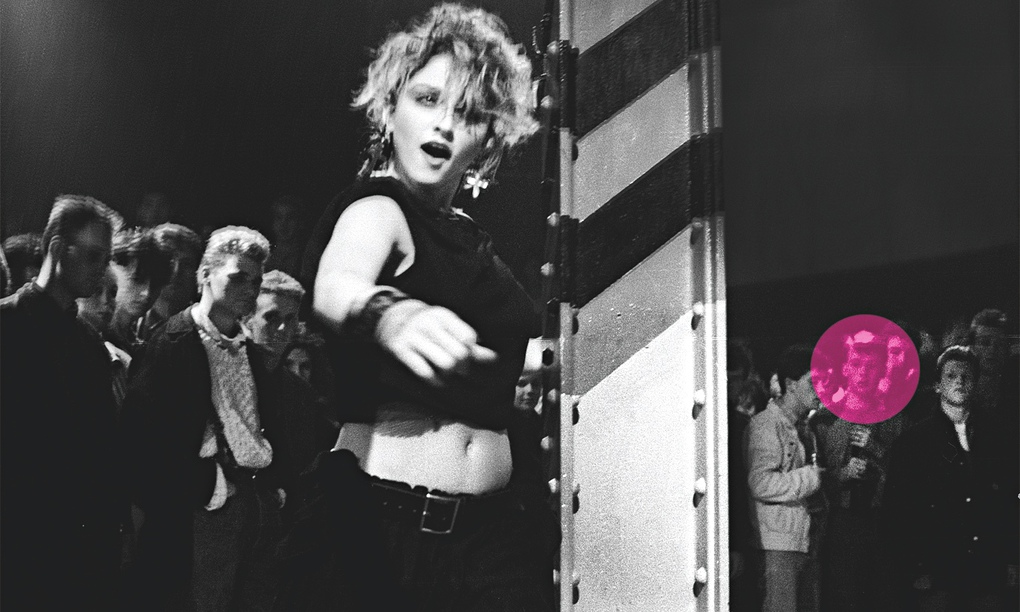 That’s me in the picture: David Connor watching Madonna at the Hacienda, 1984

‘I thought she was quite boring. It wasn’t my thing. I was into indie bands and her being a pop star was everything I was against at the time’

As Madonna’s career took off, I would always be bragging about this story. I can’t count the number of times I’ve told people I saw Madonna at the Hacienda and how it was one of the most intimate gigs I’ve been to. And every now and then I would add, “Yeah, but she was rubbish.”

I got into the Manchester music scene from quite a young age. Luckily, my best friend, Andy, had got a job at the Hacienda. He was a barman/pot collector, but as he was a signwriter they used him for odd jobs around the place, like painting the columns with those yellow and black stripes. (Andy is still my best friend and does the decorating in my house. I like to say that my house is painted by the guy who painted the Hacienda.) Through Andy I got on the guest list for all sorts of gigs. I remember one Smiths gig when I got so crushed at the front, I ended up lying on the stage watching the show upside down. It was excellent.

I was 20 and I’d been going for a couple of years when I heard about the Madonna gig through Andy. He told me the TV programme The Tube was going to be there filming one night and asked if I wanted to come along. I was working as an electrician on a building site nearby, and I told him I’d be there. I hadn’t heard of Madonna, but the Factory All Stars were also playing and I really went to see them. Plus, I just like a freebie.

We were told Madonna was going to be doing two songs on the dancefloor, as opposed to the stage, and were directed to stand around her. I will be honest, I thought she was quite boring. It really wasn’t my thing. I was into the indie bands and her being a pop star was everything I was against at the time. I could see she was miming and it was just a dance routine. I can’t speak for everyone, but I got the sense that the crowd thought the same as me. No one was that fussed about seeing her. It was just like, what’s next?

They filmed the show quite early in the evening and I decided to stay for the club night. Madonna was actually meant to be staying, too, as the headline act. I remember seeing her leave around 6pm with her dancers, after the TV shoot was over. They had all their stuff with them and I had a feeling that was it, she was gone for the night. And, sure enough she was, she didn’t reappear. I think all she wanted was the TV publicity. I don’t think she was interested in playing for 500 Mancunians.

I first saw photos from this gig in the local press shortly after, and over the years I’ve since seen them in various music magazines. I never kept a copy. It dawned on me that maybe I should have. The Urbis museum in Manchester had a Hacienda exhibition in 2007, and as I walked in I saw a really big print of it – and there was me, nearly lifesize. That was a shock.

This story still definitely impresses people. I now teach electrical installation to 16- to 19-year-olds and, whenever I’ve mentioned it, they ask, “Who’s Madonna?” Although one of them once piped up, “I know who she is – she’s that old bird.” 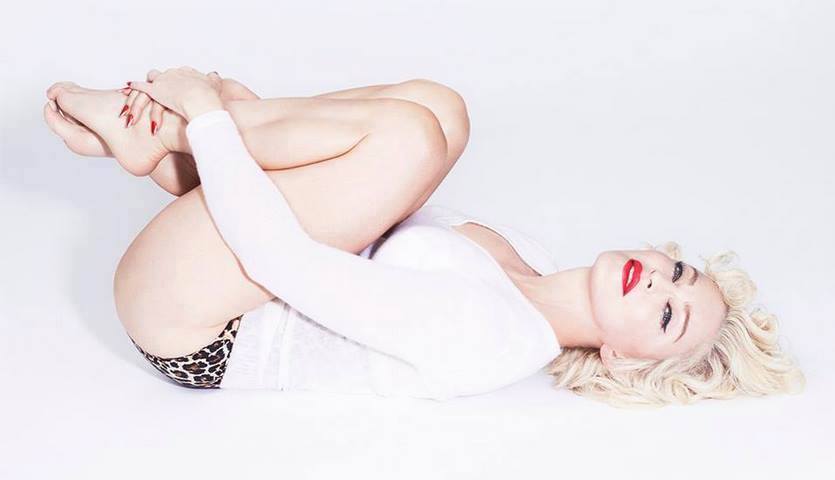 Madonna is confirmed to be a guest and perform at Che Tempo Che Va on Sunday March 8 scheduled at 20:10. This is the first time since the Music promo tour that Madonna performs on Italian TV.