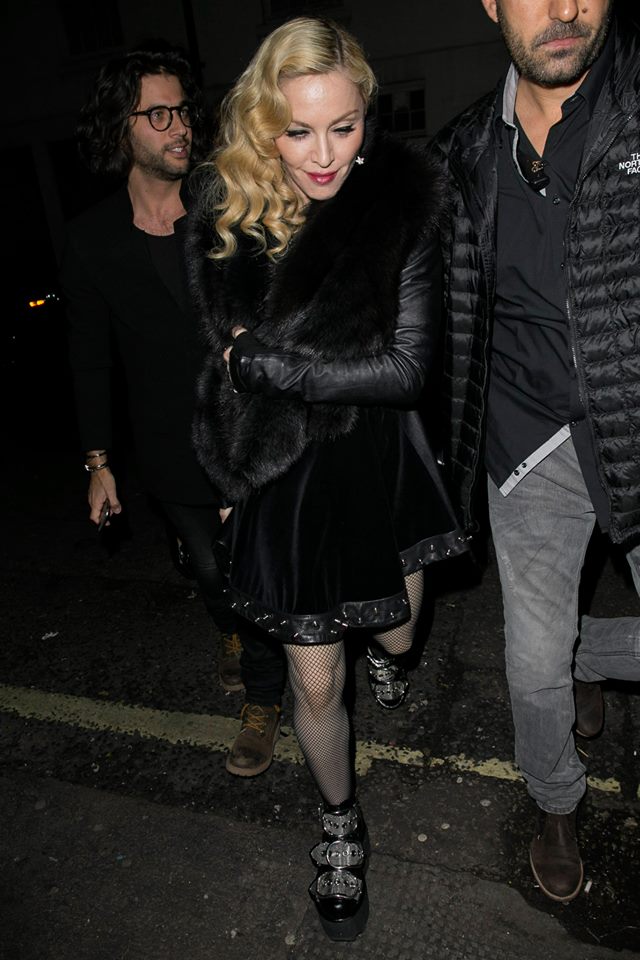 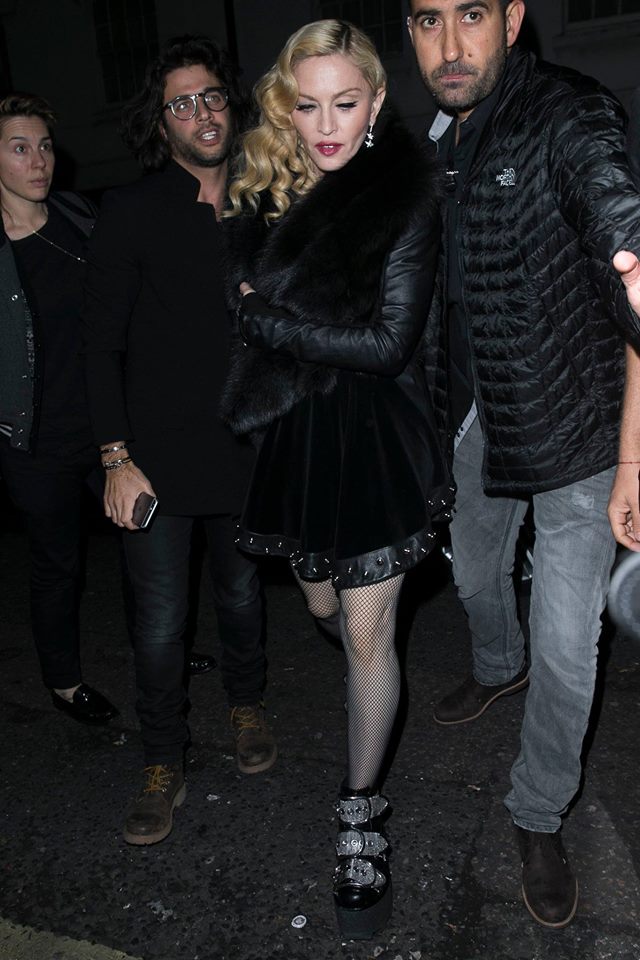 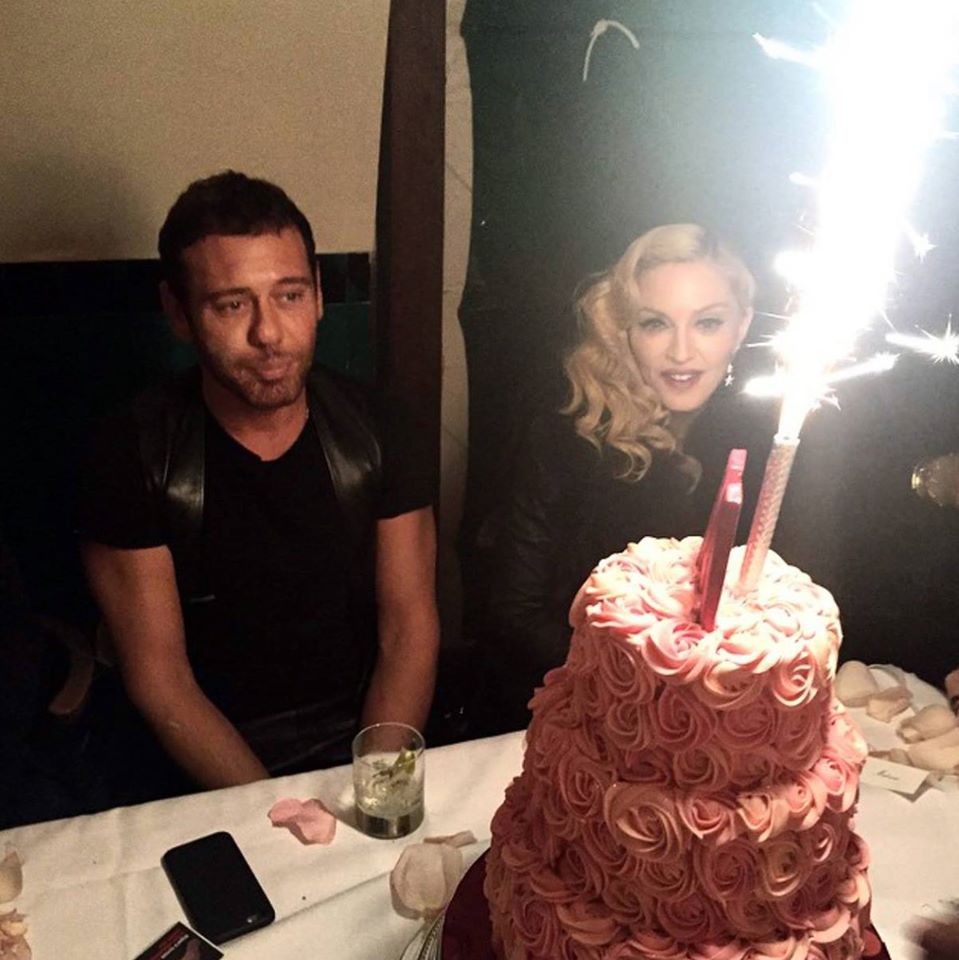 Rebel Heart World Tour announcement around the corner (according to Madonna.com) 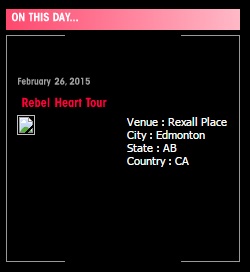 Madonna is superhuman. She has to be to survive the ugly abuse (The Guardian) Madonna was at the Brits, performing her totally boss I Will Survive-style single Living for Love, when it happened. “Took me to heaven, let me fall down … lifted me up and watched me stumble.”

So she prophesied it, and so it came to pass. It wasn’t a trip or a tumble. It wasn’t funny; it was terrifying and so brutal that the audience fell silent. It was the kind of accident that breaks necks, damages brains and haunts Cirque du Soleil performers’ nightmares. The Armani cape Madonna was wearing as she approached the podium was tied too tight and didn’t fall undone when her dancers pulled it. She was yanked back by the neck and flew through the air over three steps, landed hard at the base of the podium and for a split second didn’t move.

Watching at home, my heart stopped. Is that all it takes to kill a Queen? Milanese outerwear?

Click HERE for the full excellent article by The Guardian

Her bold new album shows that for the Queen of Reinvention, the more things change, the more they stay the same

On a recent evening in New York City, the singer Madonna was camped out at the headquarters of the famed auction house Sotheby’s. In recent years, many masterpieces have passed through its walls—Edvard Munch’s The Scream sold there for $119.9 million in 2012, setting a world record—but with an estimated wealth of $800 million, Madonna is probably the most valuable icon to take up temporary residence there. She’s definitely the most famous. And at 56, she’s also one of the youngest. These days, it’s not often that Madonna is the youngest artist anywhere.

That hasn’t slowed her down. In a flatteringly lit studio, she’s already set out a bottle of tequila and shot glasses to play a drinking

In collaboration with Universal Music France we are happy to present the following competition to you. Win 2 tickets to see M at the taping of Le Grand Journal in Paris and meet her backstage! Simply fill in your email address and accept the terms & conditions.

-Le Grand Journal will be taped on March 2nd, she will perform two songs.

-There will be an interview with TV channel France 2, this will air March 6

-Interview on 50min inside (TV show)

More pics from the Brit Awards

Even more pictures of Madonna’s performance from last night. 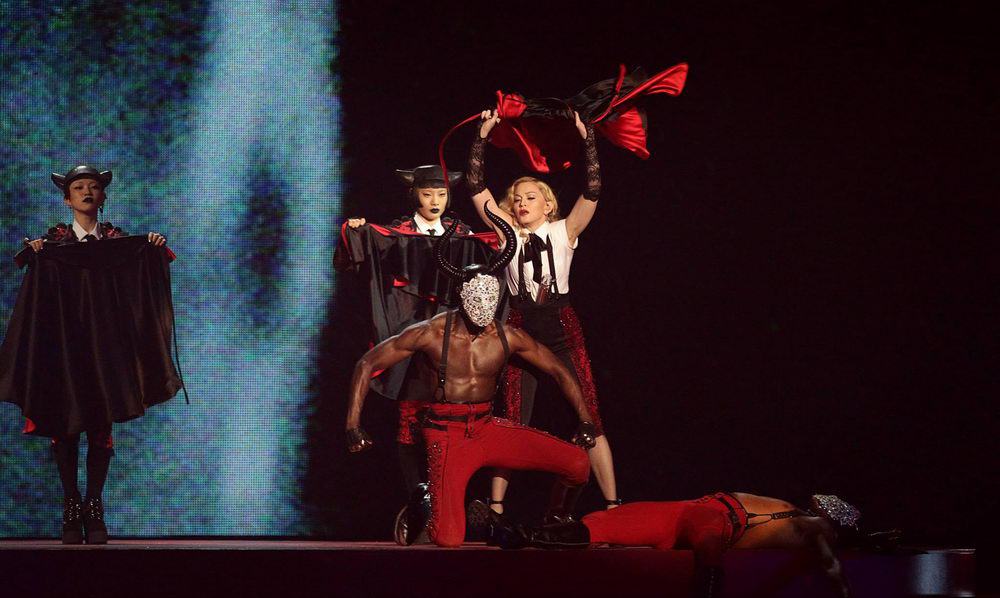 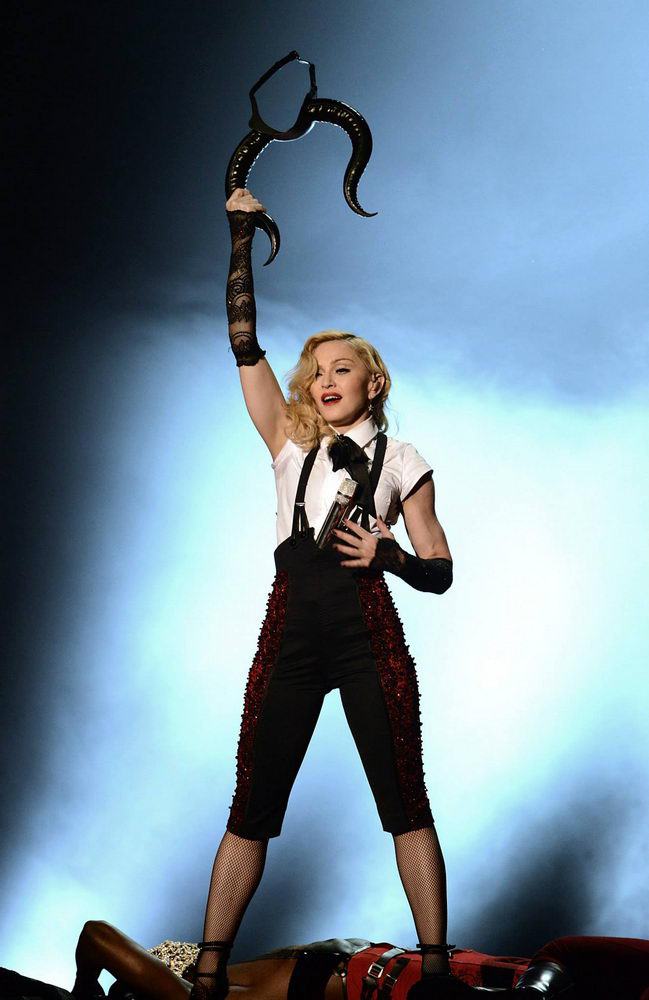 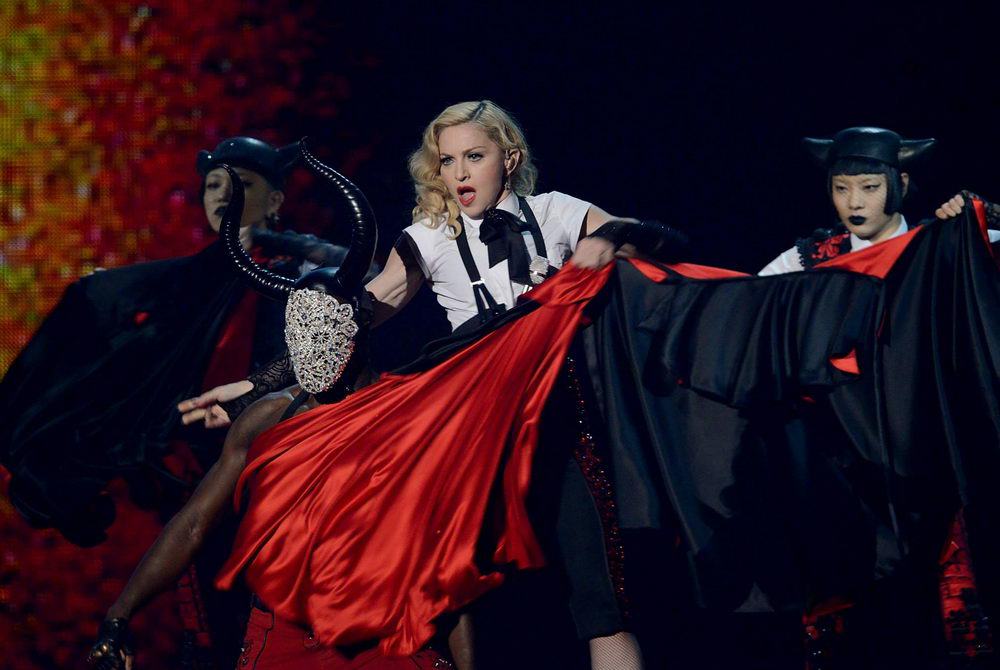 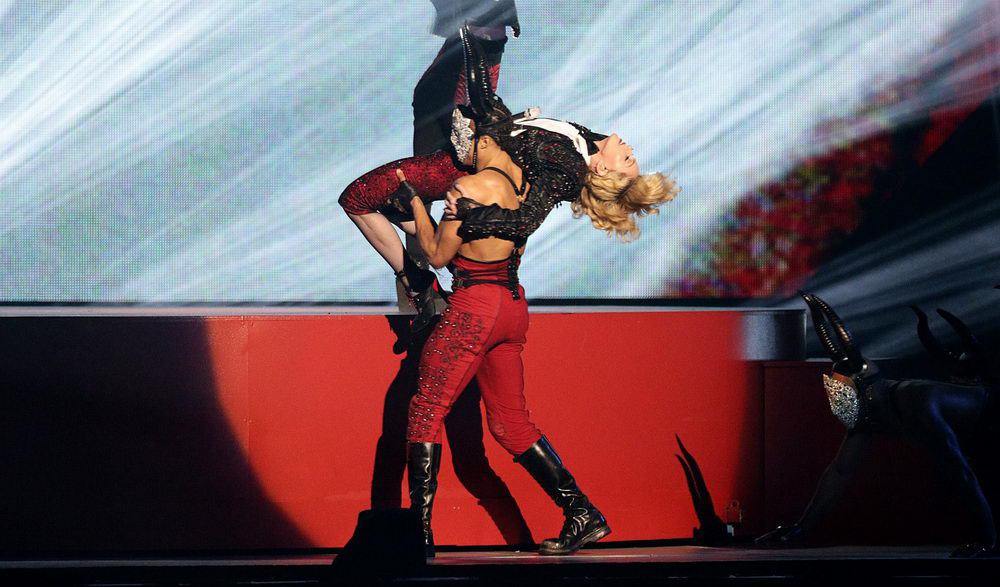 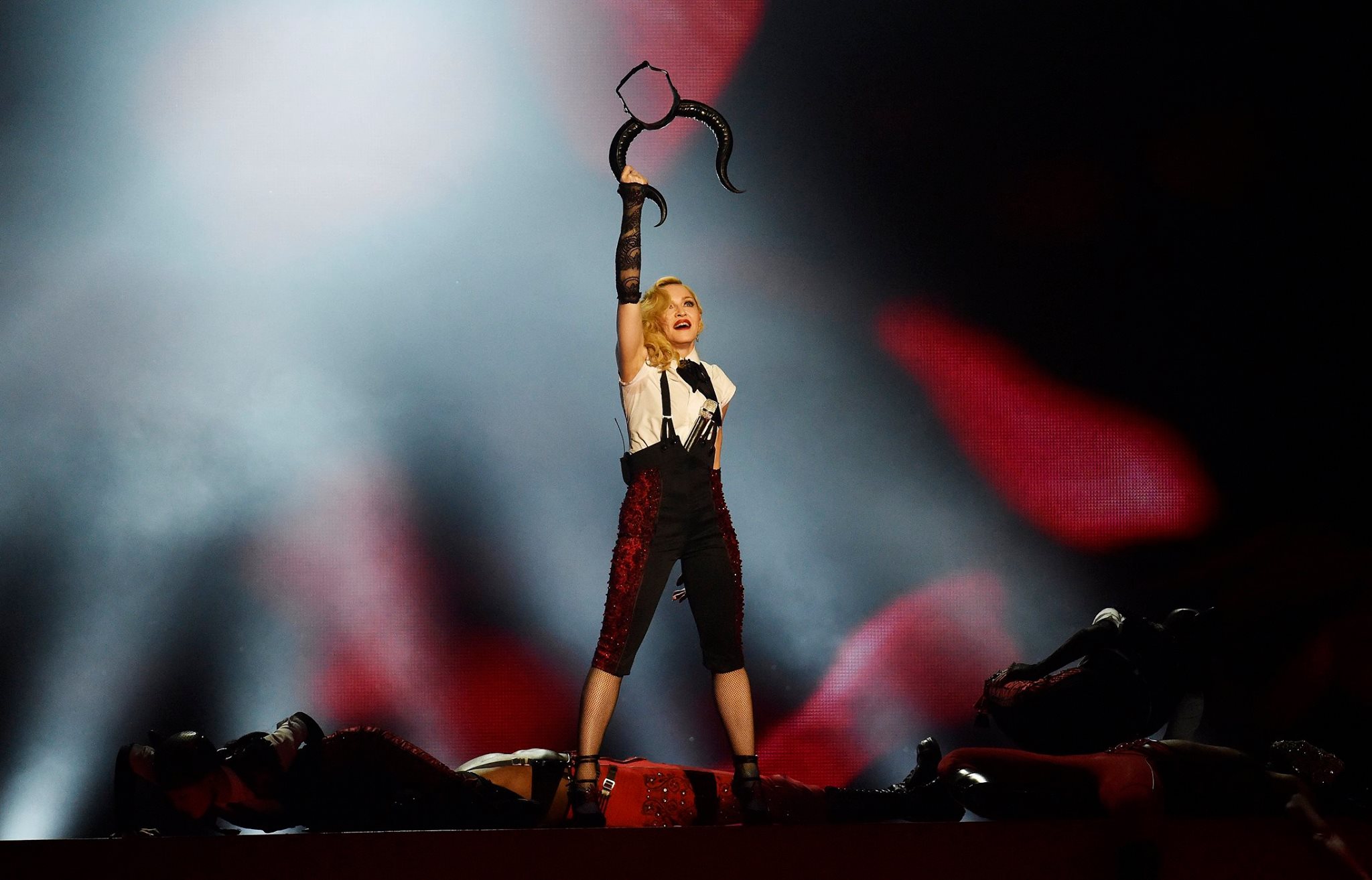 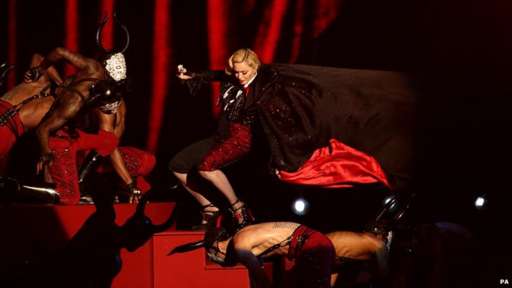 Twitter erupted as Madonna took a tumble during her performance of Living for Love that closed this evening’s Brits, here’s some of the reaction:

Armani hooked me up! My beautiful cape was tied too tight! But nothing can stop me and love really lifted me up! Thanks for your good wishes! I’m fine! ❤️#livingforlove

She said she would carry on, and did she ever.

At Wednesday’s BRIT Awards in London (the UK’s equivalent of the Grammys), Madonna’s headline performance of “Living For Love” got off to a bumpy start when the New Yorker fell off the stage.

Madonna’s huge cape appeared to get snagged by one of her dancers, pulling the 56-year-old backwards and causing her to tumble down a mini flight of stairs. The sound of her hitting the ground was audible and sent gasps around the 02 Arena, which holds 20,000.

Despite being clearly rattled, she continued with her matador-themed performance and the crowd screamed their appreciation for the singer’s stoical show.

Take a bow, Madge. You’ve earned this one.

Madonna Falls Onstage at the Brit Awards, Then Finishes Her Performance

The queen of pop took a nasty tumble

Just like the song says: She’s gonna carry on.

Madonna was pulled down a flight of stairs during her performance at the U.K.’s Brit Awards today performing her new single “Living For Love.” Video footage appears to show a cape-like costume element meant to be pulled off Madonna’s shoulders which didn’t detach properly, dragging Madonna down three stairs and onto her back on the stage.

Falls in live performances are an occupational hazard for the most seasoned performers: In 2009, to name just one instance, Jennifer Lopez fell onstage at the American Music Awards. But this has been a moment of unusual attention to Madonna, with her upcoming albumRebel Heart representing a serious bid for an artistic comeback.

Still, Madonna’s beating back her critics began seconds after her fall: She got up and finished the song.

Madonna falls off stage at the Brit Awards

Madonna took a very painful-looking tumble off stage in the middle of her Brit Awards performance.

The star, who was making her first appearance at the awards show in 20 years, fell during her song Living For Love.

The Telegraph’s reporter Alice Vincent who was at the awards reported audible gasps from the crowd: “I overheard someone say ‘I thought it was part of the act.'”

Brit awards 2015: all the performances reviewed, from Kanye to Madonna

Taken from The Guardian

Oh, didn’t think we’d get this after its Grammys outing. Madonna has suffered from Bjork syndrome of late: collaborating with the hottest production talent, sometimes using multiple examples in a single track, but not joining the dots with songwriting. Living For Love however manages to blend a properly good chorus with the backing track, even if you can still very much see the seams.

Once again, the look is “bejewelled sex-toreador”. She struts convincingly around the opening bars and then disaster: as her cape is yanked off she’s pulled off her podium and clatters to the floor! But as befits Madge, who has risen phoenix-like more times than anyone can remember, she’s a proper trooper and completes the song, though a little more muted than you might have otherwise expected. Many lesser performers would have missed an entire verse at such a nasty fall. Kudos! a collection of press photographs from Madonna’s Brit Awards performance, she performed Living For Love with a new choreography. 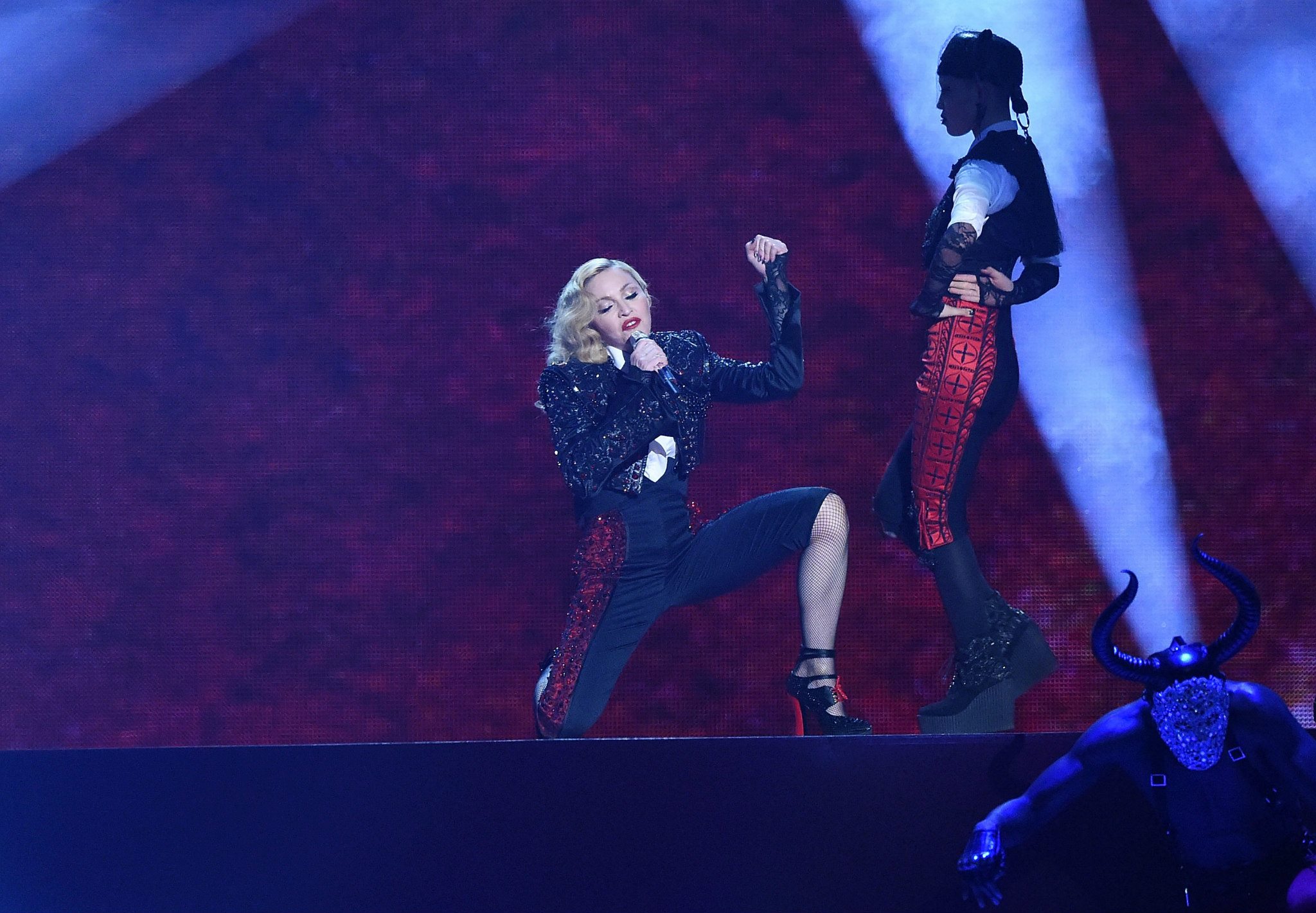 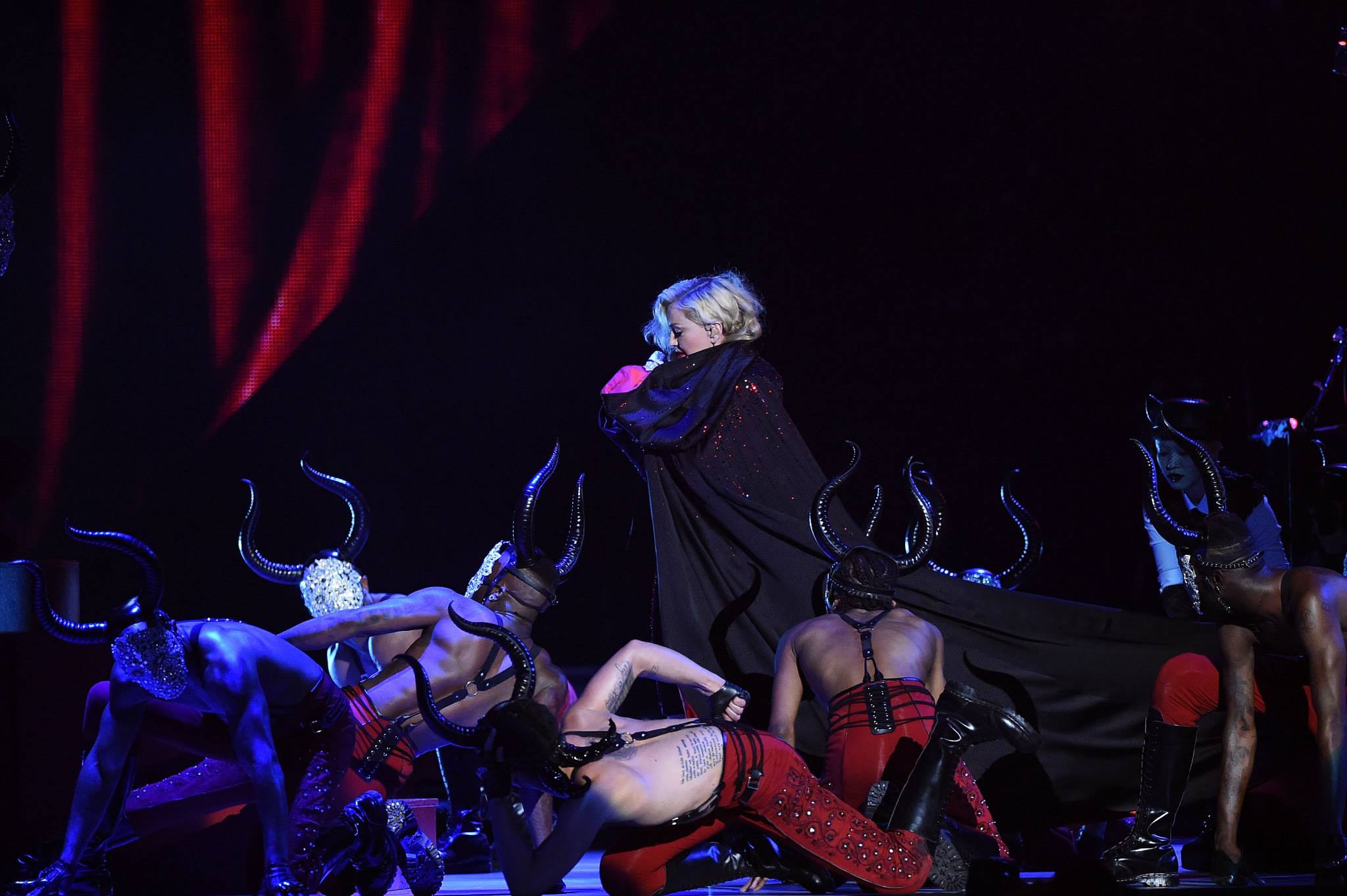 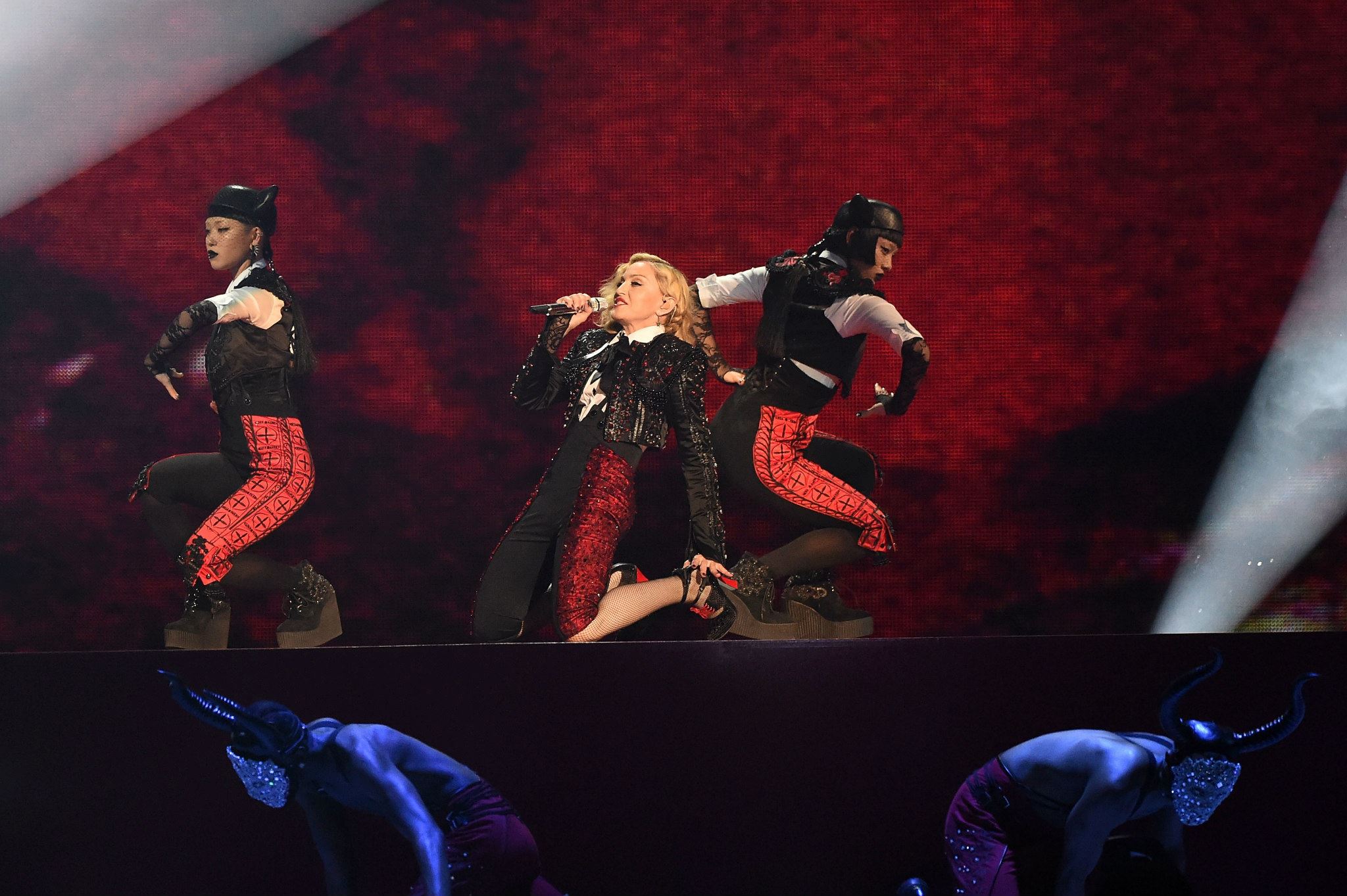 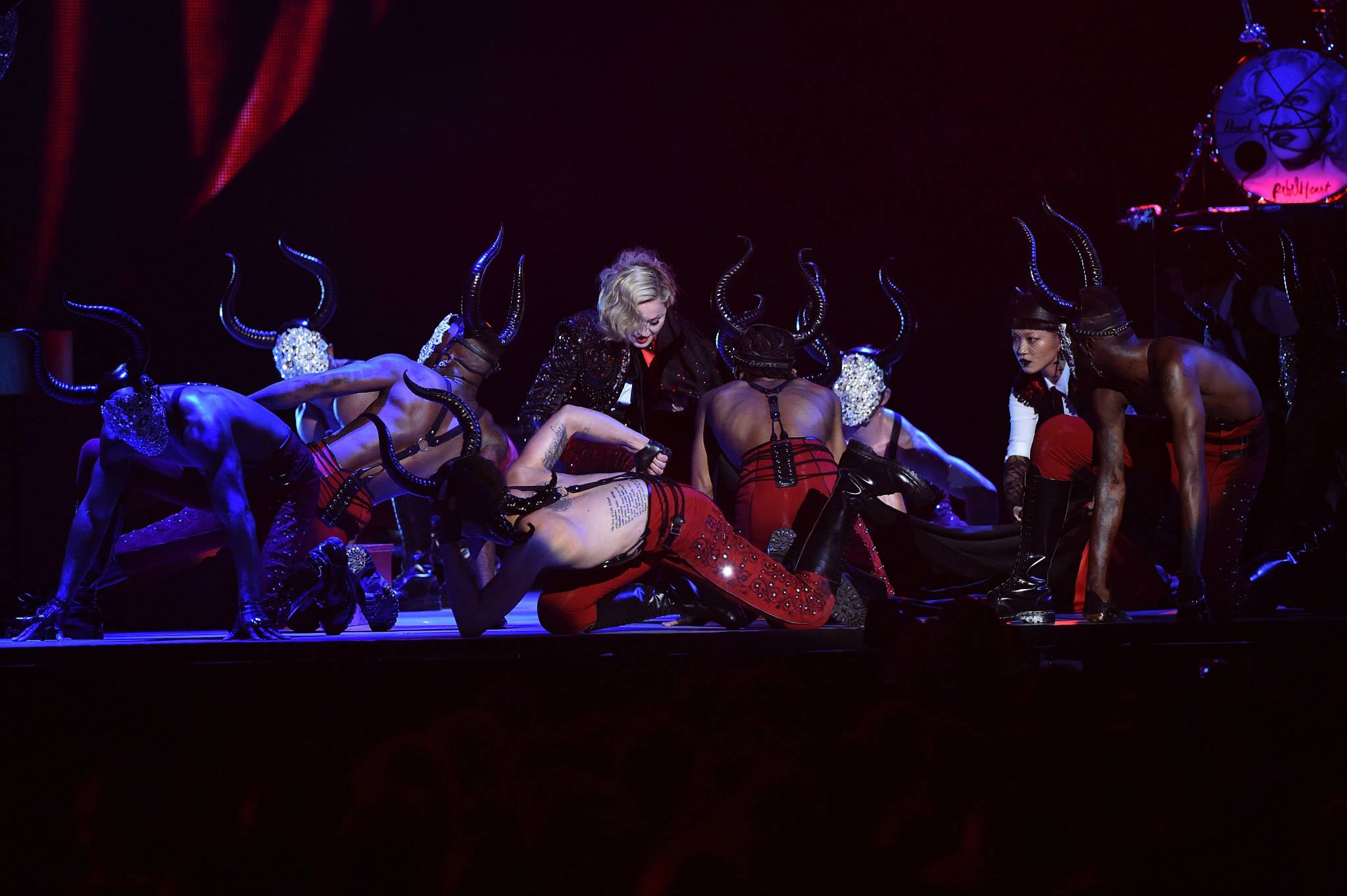 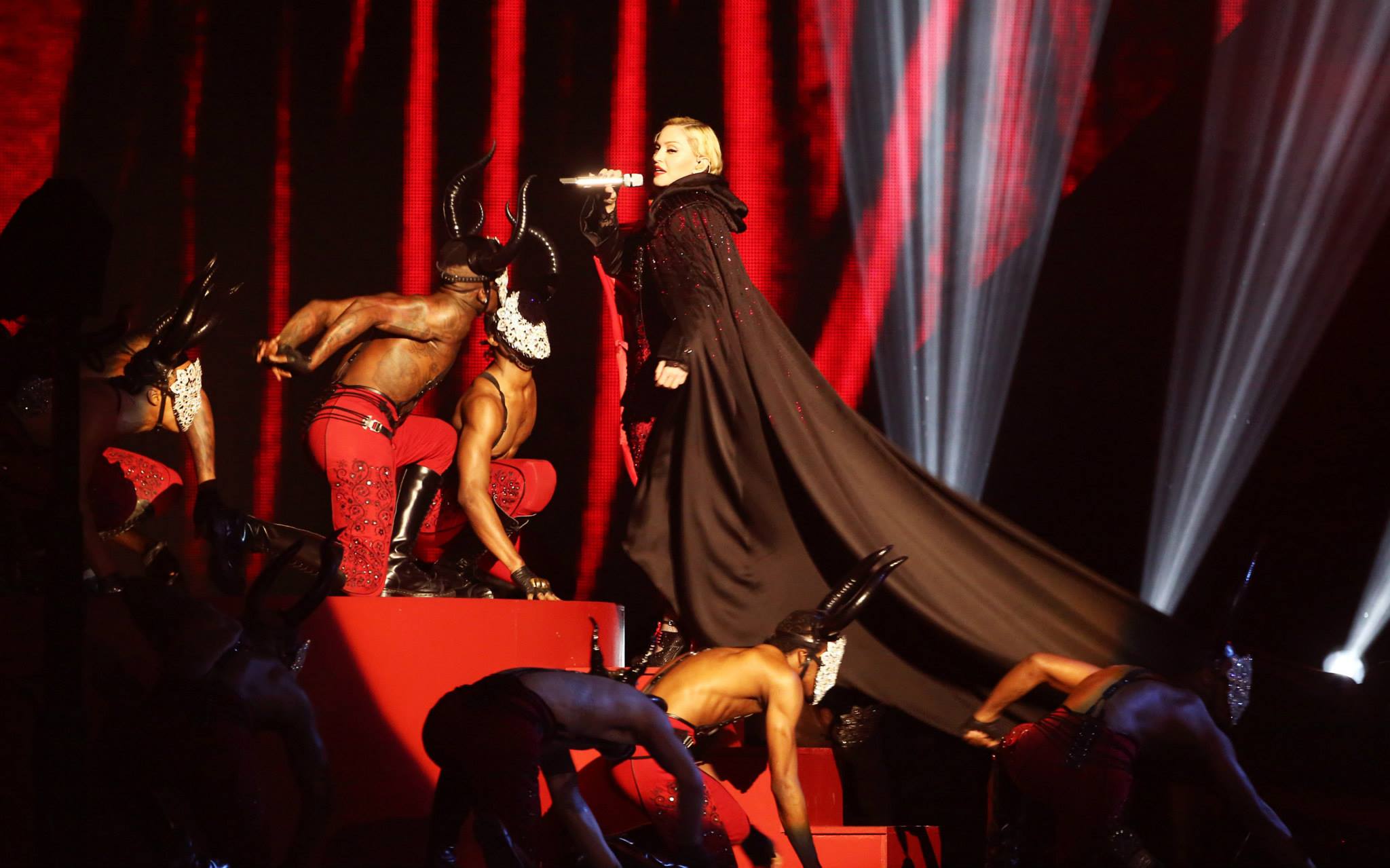 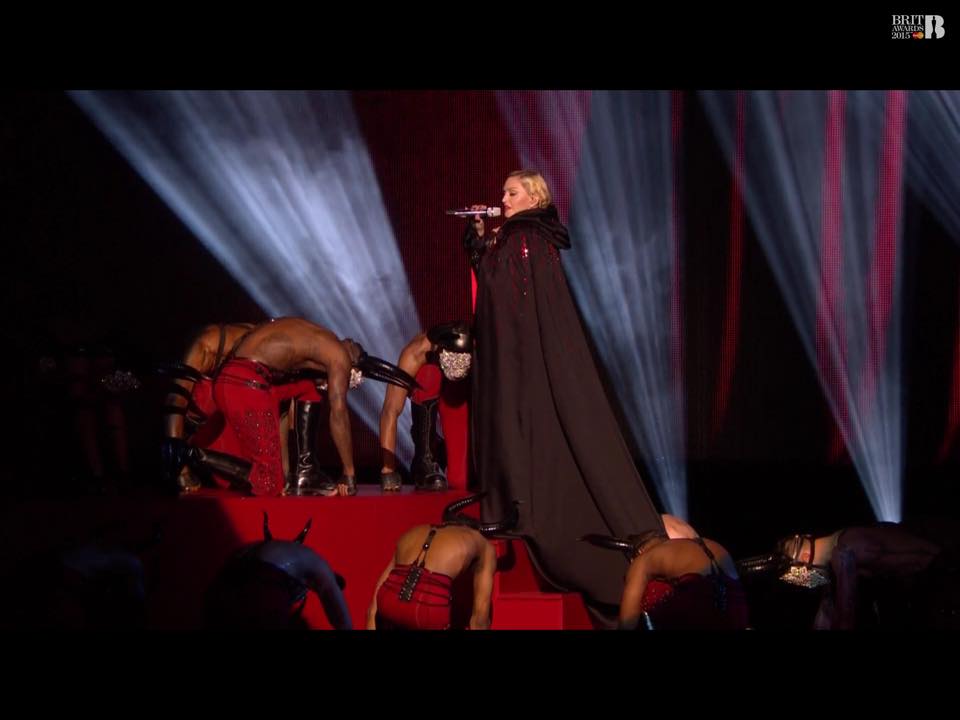