Madonna Gets Candid: Acting Her Age, Making Movies and Which Scorsese Film She Almost Starred In (VIDEO)

Guess our DVD is famous now

You can still win one of the few copies left (limited pressing of 200) please see a few pages back for our competition. Share the pic and tag #madonnaunderground, you have until Thursday!

Articles on ticket sales for the Antwerpen show, the everlasting ‘positive’ Belgian media ;)

Thanks to Jochen for the scans! 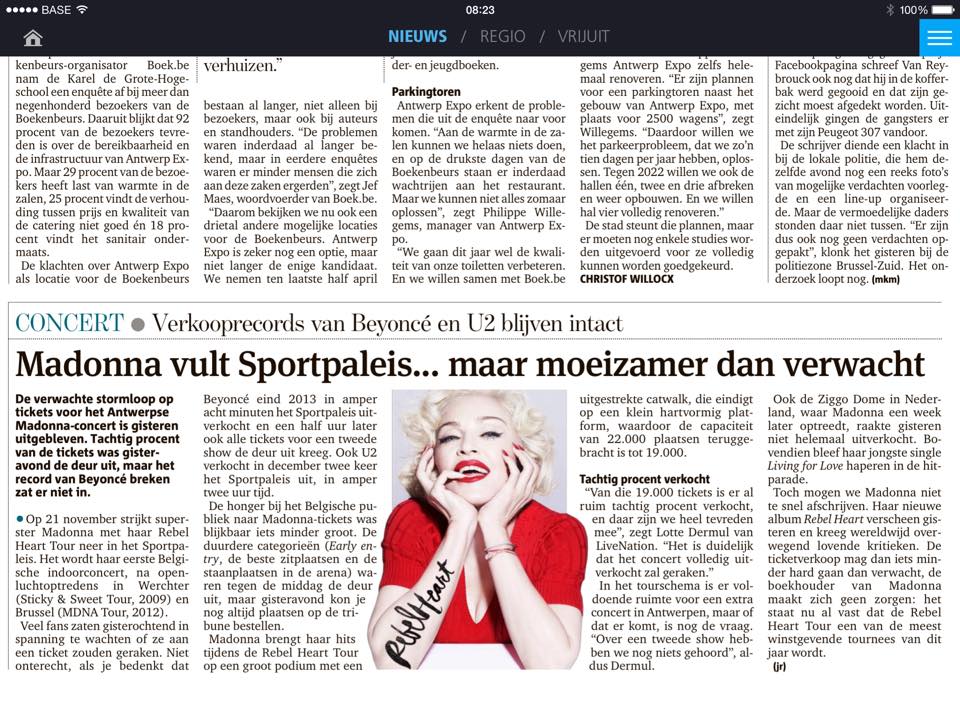 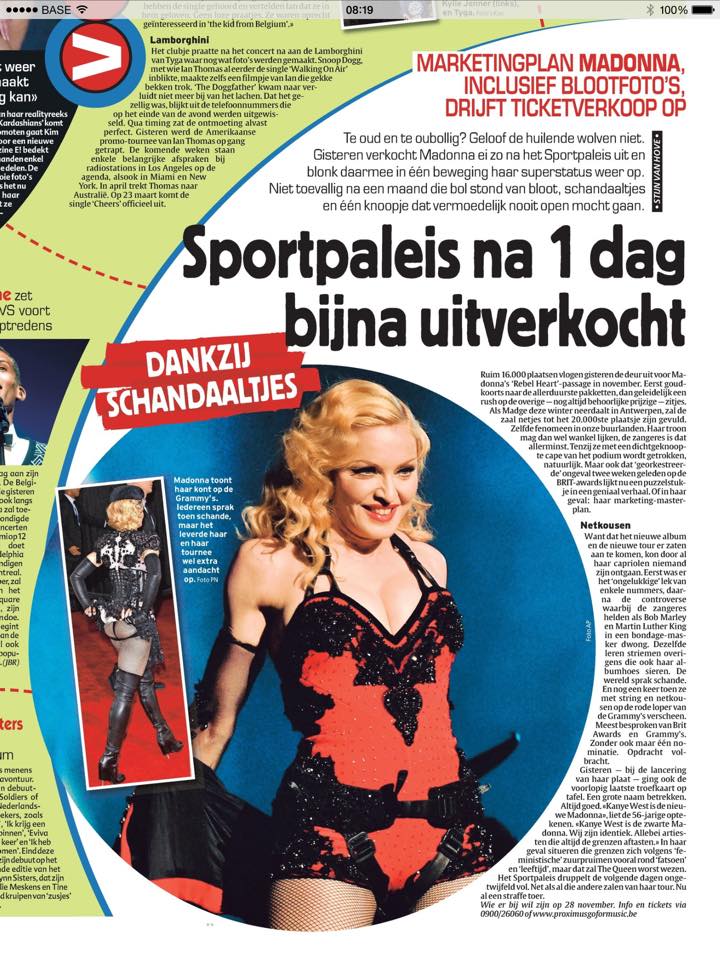 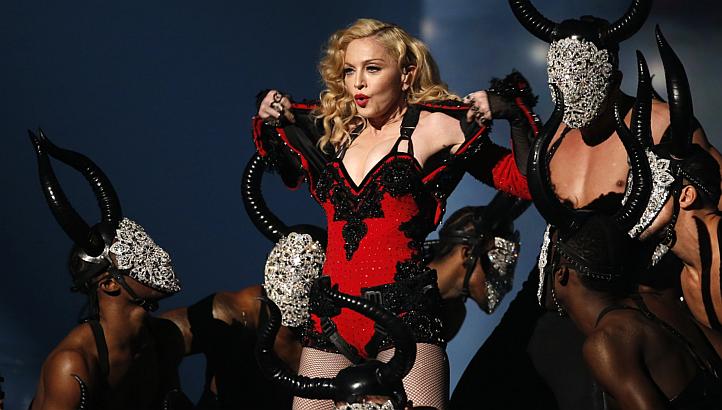 PARIS (AFP) – A Dec 9 concert in Paris by US pop star Madonna sold out within “five minutes” of going on sale Monday, the organisers of the event said.

The date is for now the only one Madonna will be playing in France, her first event in the country since 2012.

The 56-year-old American singer will on August 29 kick off a tour of North America and Europe to promote her latest album, Rebel Heart, as well as revisiting some of her crowd-pleasing past standards. Currently, she has 35 concert dates programmed.

Madonna has sought to calm a festering row with France’s far-right politician Marine Le Pen started back in 2012 when the diva showed a photo of Le Pen on stage in Paris with a swastika superimposed on her forehead, earning the threat of a lawsuit.

Last week on French TV, the American star suggested she and Le Pen “sit down and have a drink” and talk about their points of view.

Le Pen the next day accepted the invitation “with pleasure”, but there hasn’t been any sign yet of the two blondes getting together for their discussion.

Madonna on Her ‘First Heartbreak’ in Life, Falling at the Brit Awards and ‘Rebel Heart’ VIDEO

It’s Madonna Week on OfficialCharts.com. This past Saturday OfficialCharts.com published Madonna’s Official Top 40 Biggest Selling Singles (UK Sales) and there is a whole host of other exclusive content coming up this week that would be great to get you involved with. On Friday of this they will be inducting their readers’ ultimate Madonna track into our Official Charts Pop Gem Hall Of Fame, which is a celebration of much loved pop classics. Readers can vote in the poll here  They will be publishing an early sales flash of Rebel Heart’s Official Albums Chart progress tomorrow morning (Tuesday) before the midweeks on Wednesday! 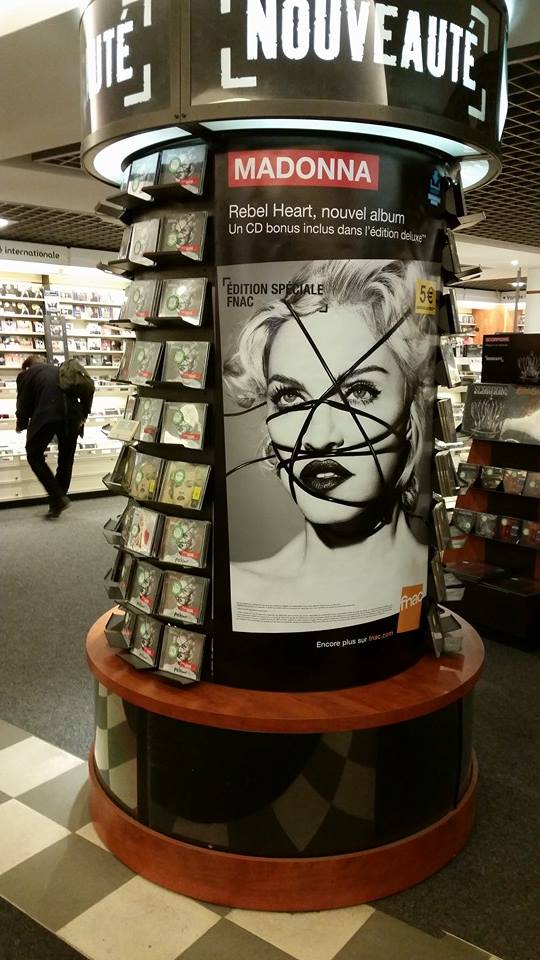 Our review: Madonna by Michelle Morgan

Let me start of by saying that after reading dozens of books on Madonna, and none of them being truly accurate, focussing on scandals and rumors. A Madonna fan is in dire need of  a positive, honest and fun read.

Michelle Morgan known for her books on Marilyn Monroe, is a Madonna fan by heart. She dedicated her time to work on a book with the love for the artist in mind. After reading the 448 page book and looking at the 220 pictures included, I can honestly tell you that this book is a breath of fresh air in the Madonna-book world.

This book discusses Madonna’s life from birth to the last update in 2014 (written before Rebel Heart). Every page focusses on a new chapter, a new era, a new project. The writing is very pleasant to read, the pictures are stunning. I even discovered pictures that are quite unknown and might not even have been published before. This book reads like a diary, once you’ve started, it’s very hard to put it down. As a fan myself I do pay attention to the details and I know it is extremely hard for any writer to be absolutely accurate in every little detail that you write down. I can truly say that Michelle Morgan did a very good job in keeping up with the facts and not so much the rumors.

Yes it is like a diary, it is a book you’d like to keep close to you. Whenever you feel like looking back on her Blond Ambition days, go to that era. But let’s say you need information on her filming W.E. skip the pages to that project. The book is not too heavy and not too big, it is easy to take with you and ideal to read before going to bed.

If there is a book that you need to include in your Madonna book collection, it is this one. I give my thumbs up to Michelle Morgan for writing such a lovely and accurate book on Madonna with so much respect to her. The respect and the knowledge shows while browsing through the pages. At the end of the book you cannot help but admire Madonna for doing so many amazing things in her life. You also can’t help but hoping that Michelle Morgan might write a follow up to this in the near future.

From a true blue fan to you: Madonna by Michelle Morgan is highly recommended!

Madonna – Michelle Morgan will be released in the UK on April 2, pre-order through Amazon

Madonna – Michelle Morgan is available in the US from May 26, pre-order through Amazon 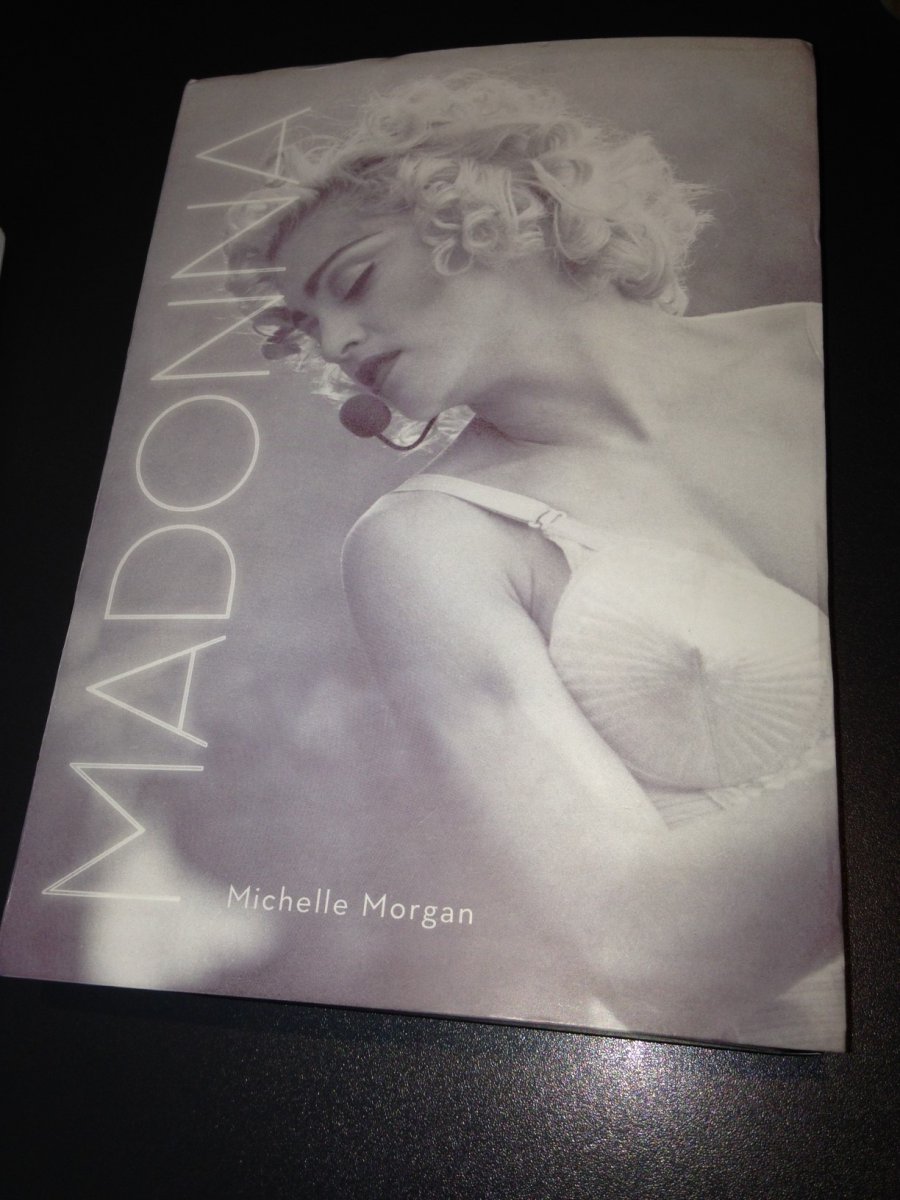 Stay tuned for more promo regarding this book through MadonnaUnderground 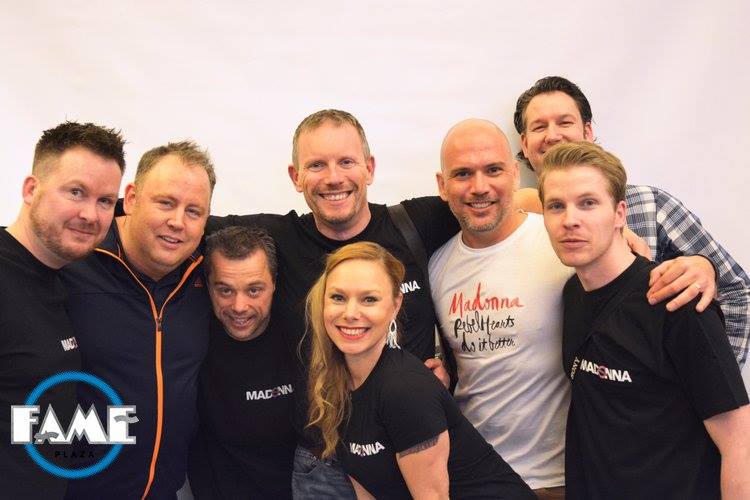 Madonna is artist of the month in Dutch Media Markt stores

Thanks to Duco for the images! 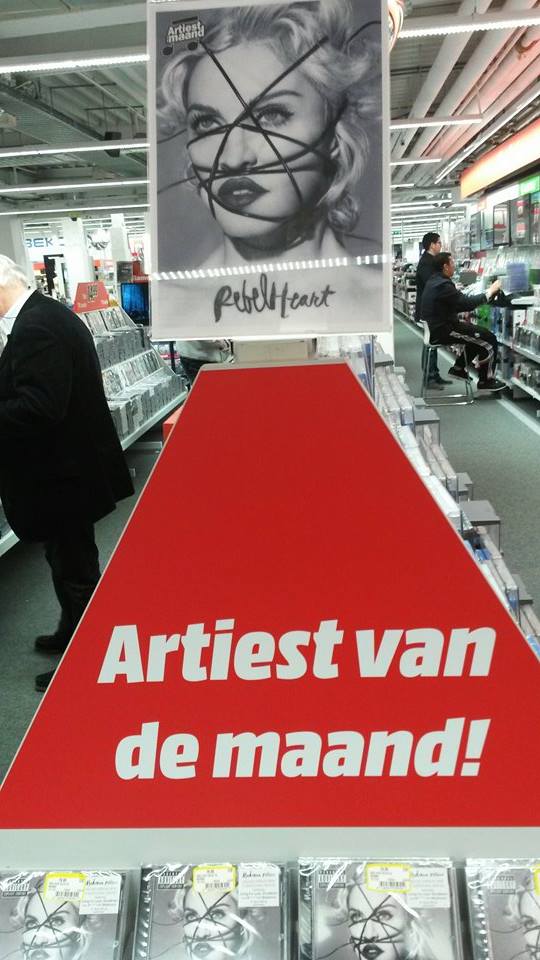 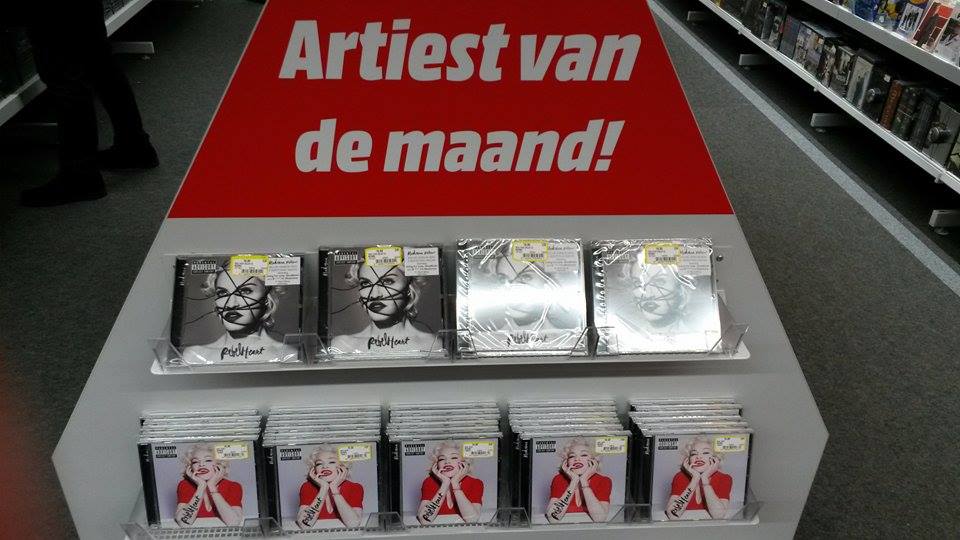 Madonna and Rebel Heart are featured in the new edition of Media Markt’s free magazine Mediazine. The magazine is free and available in the Media Markt stores 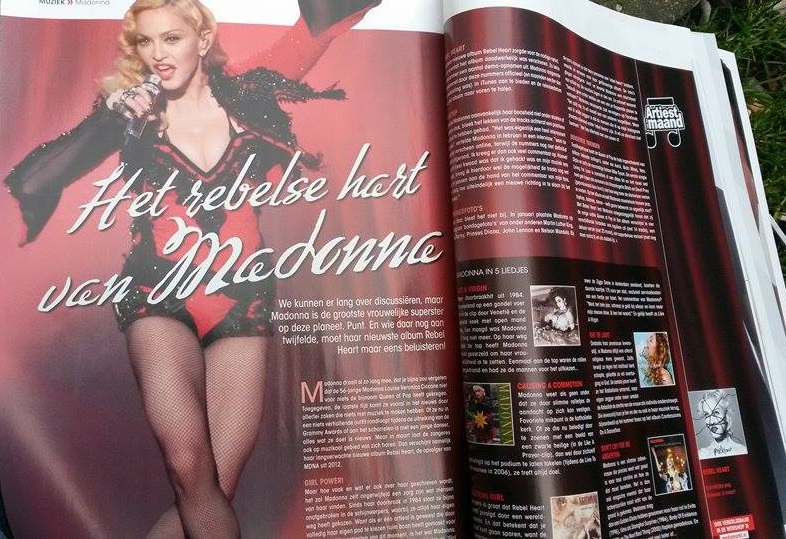 Madonna named her 13th studio album “Rebel Heart.” The title fits the Madge mold of past titles: adjectives, a noun or two, perhaps a preposition, combined to suggest a loose theme.

“Like a Virgin,” “Ray of Light,” “Hard Candy,” “Bedtime Stories” and her relatively epic “Confessions on a Dance Floor” confirm her long-player branding technique, each connecting a concrete idea with the themes conveyed through the songs, more or less. The outlier, her forgettable last album, “MDNA,” was a coy reference to the drug MDMA (a.k.a. molly or ecstasy). It sounded as spent as the Monday following an epic Saturday binge.

“Rebel Heart” is a far better album than “MDNA” — cleaner, crisper, more sober, less a flimsy attempt at drawing fickle youth ears and more a sturdy rhythmic platform to showcase some of the most striking tracks she’s made in 15 years (specifically, since “Music,” her last great album).

Featuring production by artists including Avicii, Diplo, Kanye West and Sophie and guests including Chance the Rapper, Nicki Minaj and (in spoken form) Mike Tyson, it has completeness to it rather than the mishmash of could-be stabs at relevance that dots her lesser work.
lRelated Madonna, Giorgio Armani disagree on cause of her fall at Brit Awards

From the start, “Rebel Heart” spotlights a clarity of intention, one the artist conveys in notes that accompanied the release: “I knew I wanted to explore the duality of my personality which is renegade and romantic. And I wanted to write good songs…. That’s it.”

Madonna cites as inspiration rebels Martin Luther King Jr., Nelson Mandela, Bob Marley and John Lennon, all of whom “changed the world. They took the road less travelled and they made all the difference. You can’t be a rebel and not be willing to take the consequences.” A vague reference to her recent backward tumble during the Brit Awards? If not, it should be.

Regardless, hers is a noble goal, even if the stakes in her brand of rebellion are hardly of apartheid proportions. Focus, though, drives tracks such as “Illuminati,” “Joan of Arc” and “Iconic” into that sweet spot between club frenzy and revelatory lyricism, the kind that can lift spirits to emotional heights.

NEW YORK & UNIVERSAL CITY, Calif.–(BUSINESS WIRE)–The biggest names in entertainment will bring the music of the iHeartRadio app to life on Sunday, March 29 for the second edition of the iHeartRadio Music Awards hosted by Oscar and Grammy award winning actor and musician Jamie Foxx. The event will air live on NBC from 8-11 p.m. ET/PT from the historic Shrine Auditorium in Los Angeles and will be broadcast simultaneously on iHeartMedia stations nationwide and across the iHeartRadio digital music platform.

“Whether they’re new to the scene or industry veterans, each artist’s journey is exciting to follow, from their first radio spin to their first iHeartRadio Music Award nomination.”

“This is the night we celebrate the biggest songs and artists we played for fans on our iHeartRadio stations across America and on the iHeartRadio app over the past year, along with a look at what’s coming in 2015,” said John Sykes, President of Entertainment Enterprises for iHeartMedia, Inc. “And who better to host than both a Grammy winning musician and Oscar winning performer Jamie Foxx? This is going to be an amazing star packed Sunday night of music on NBC.”

“I’m so excited that Jamie Foxx is taking the reins at this year’s iHeart awards. He is the perfect choice to lead this extraordinary night of music and celebrity artists!” said Paul Telegdy, President, Alternative and Late Night Programming, NBC Entertainment.

“2014 was such an incredible year for so many artists across different genres, so it’s great to see them get the recognition they deserve,” said Tom Poleman, President of National Programming Platforms for iHeartMedia. “Whether they’re new to the scene or industry veterans, each artist’s journey is exciting to follow, from their first radio spin to their first iHeartRadio Music Award nomination.”

“The iHeartRadio Music Awards is the night in music where the industry’s top artists get to shine, in a relaxed and fun atmosphere, and celebrate their own achievements as well as those of their peers,” said Ian Stewart, President of Done + Dusted Inc.

Madonna’s second single Ghosttown is really picking up in Holland, it’s already being played on Dutch radio (much more than Living For Love)