The songs M has been teasing through Instagram, are they really part of the setlist?

M has been posting various lyrics from songs throughout her career on Instagram. Whether she is teasing them because they are included in the setlist for the Rebel Heart Tour, is simply teasing and they don’t mean anything or she’s going through various stages of her carreer and putting them together with a song.

We do know that Steven Klein has shot a video this past weekend with M, and M posted a shot of her in a dress very similar (is it the same?) to the one worn to the ’91 Academy Awards. Is she addressing iconic moments from her entire career and including it in her new show?

Mike Tyson already revealed that he recorded a video for Iconic in an interview (TVLINE), so will Iconic be an interlude or will it open the show?
All we know is that the teasers are a lot of fun and we hope to see many more! This is a recap of the songs M has been teasing on Instagram:

Madonna teasing Iconic with the ‘iconic’ dress from 1991?

M is teasing song titles and other bits from the forthcoming Rebel Heart Tour again. She posted this photo writing ‘Iconic’. This dress seems extremely similar to the dress she wore to the 1991 Academy Awards where she attended with Michael Jackson and performed Sooner Or Later live. She also appeared on the cover of Vanity Fair wearing this dress.

If it’s not the same dress, it’s extremely similar and a great nod to an indeed iconic performance and iconic look

Fame, Sex, Men, and Her Inner Nun: Madonna on How She Made It

NEWSJuly 13, 2015
In this 1985 Spin cover story, Madonna opens up about her penniless years, struggle for success, the men she loved, used, and felt passionate about, and why she’d be a nun if she wasn’t a singer.
Editor’s note: The Daily Beast is celebrating the 30th anniversary of Spin by republishing two memorable features from the magazine. This bulleted interview with Madonna was originally published in the May 1985 issue of SPIN, which hit newsstands on March 19, 1985.

Trash  I like to look the way Ronnie Spector sounded: sexy, hungry, totally trashy. I admire her tonal quality. I don’t have a deep, throaty voice or a womanish voice when I sing. I think my voice sounds innocent and sexual at the same time.

That’s what I try to tell people, anyway; but they always misconstrue what I mean when I say “sexual innocence.” They look at me and go, “innocent, huh?” They think I’m trash.

Sexcess  I couldn’t be a success without also being a sex symbol. I’m sexy. How can I avoid it? That’s the essence of me. I would have to have a bag over my head and over my body; but then my voice would come across, and it’s sexy.

READ MORE by The Daily Beast

Not only did the artist formerly known as Iron Mike dole out fresh intel about Season 2 of his eponymous Adult Swim ‘toon Mike Tyson Mysteries (premiering this fall), but he dropped a massive — and potentially controversial — scoop about the video he recently shot (presumably) for Madonna’s upcoming Rebel Heart Tour. (Tyson is a featured performer on the album’s “Iconic” track, which is rumored to be No. 1 on her tour setlist).

“It’s just intense,” he tells me of the footage he filmed, which he admits he might catch some “slack” for. “I’m in a cage. I’m a hostage. I’m chained. I’m naked. I look like a savage. When I [shot] it it didn’t seem that intense. But then you watch it and go, ‘Whoa.’ It was like [something out of] National Geographic… I need to be tamed, man.”

And then Tyson concluded the interview by thoughtfully, movingly explaining how the “right intentions” have helped fuel this remarkable second act in his career.

Sadly Christian Audigier has passed away after battling cancer. M has been wearing his clothes for years. RIP. 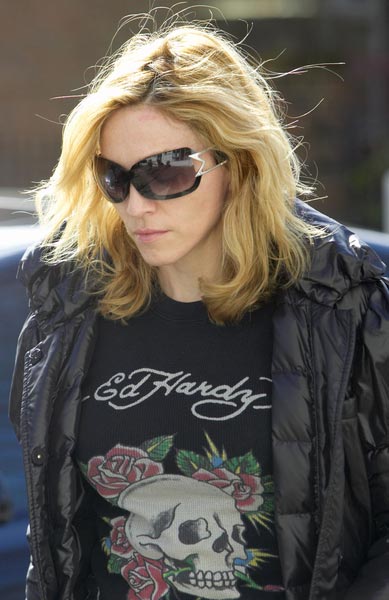 Hacking and leaking Madonna’s unreleased recordings online does not pay, as Adi Lederman learned upon receiving a 14-month jail sentence from the Tel Aviv Magistrate’s Court on Thursday as part of a plea-bargain deal following his conviction for cyber crimes against the pop singer.

The full wrath of Israeli and US authorities, including the FBI, came down on Lederman for charges of computer trespassing, fraud, and intellectual property offenses against the superstar, who has come to Israel on several tours and is a known follower of Kabbala.

Last December, a series of demos from Madonna’s album-in-progress, Rebel Heart, were leaked online. Following the breach, which originated in files belonging to people working with the singer, Madonna released six tracks and moved up the release date of the full album to March.

“I have been violated as a human and an artist!” Madonna wrote on Instagram following the hack.

Lederman was fined NIS 15,000 by the court, which said its sentence should “send a message of deterrence” and uncompromising commitment to the law to others like Lederman.

The sentence was more lenient than it might have been, in light of the fact that Lederman suffers from some medical issues, as well out of concern that a full trial could lead to unintentional further exposure of Madonna’s personal details and those of people working with her.

The now-convicted hacker was arrested in late January, and was previously best known for auditioning on air in 2012 for the Israeli TV show Kochav Nolad (“A Star is Born”), Israel’s version of American Idol.

Pre-order your official Madonna calendar 2016 through Amazon now, this will ship July 15

For Dutch fans, pre-order through Bol.com 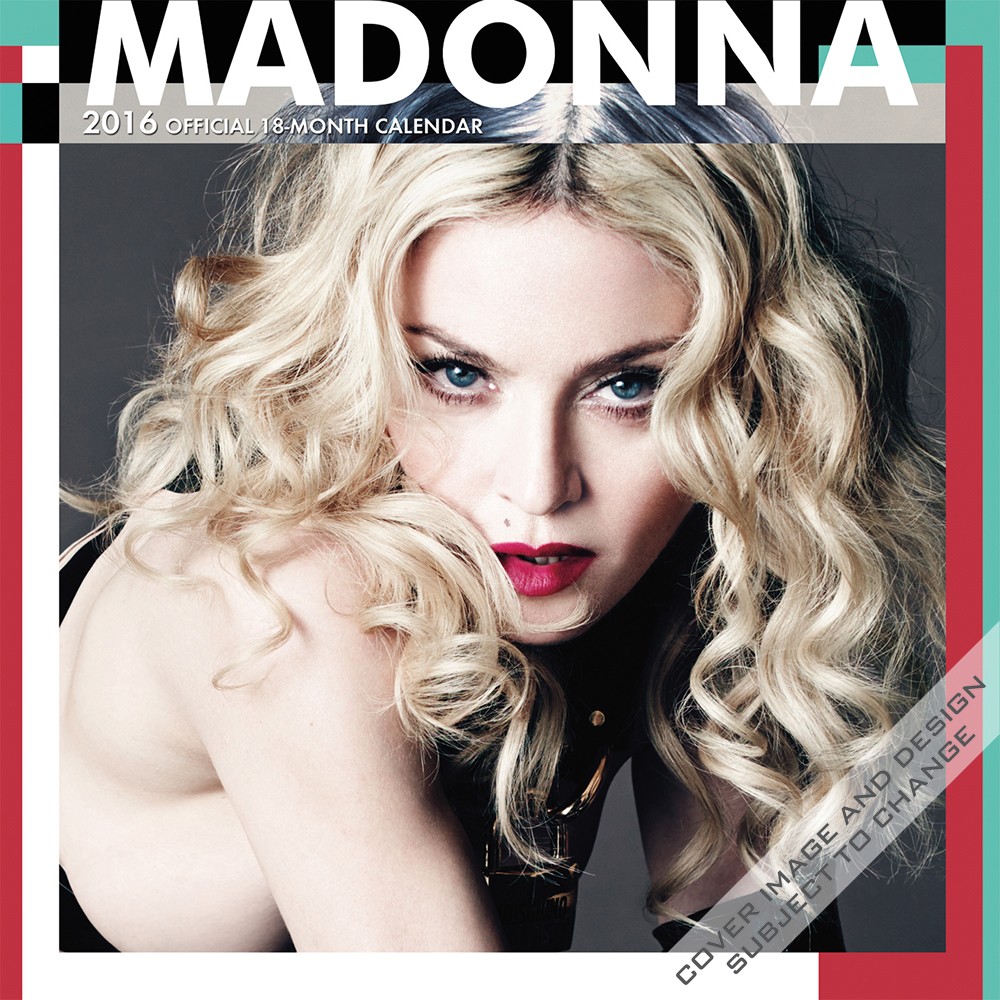 What’s up with Madonna’s concert ticket sales? Why there are still some to buy and what fans are waiting for

THE good news is that if you want to see Madonna on her first Australian tour in 23 years you can still get tickets.

The bad news is that unless you’re willing to ride solo you’re going to have to pay top dollar for good seats. Or travel to Brisbane, the only place $100 tickets are left (you’ll also have to go alone though).

It seems local Madonna fans are in standby mode waiting to see if the superstar will add more shows to her Rebel Heart Australian tour next March before they snap up the remaining seats.

Promoter Live Nation have yet to announce whether Madonna will include more shows in her itinerary, although with gigs on Saturdays and Sundays only so far she does have free time in her schedule.

All the $2000 front row tickets for her Melbourne, Sydney and Brisbane shows sold out instantly, as did all the cheap seats priced at around $100.

There’s heavy rain in Amsterdam today, typically three years ago today we had the exact same weather. Fans queuing outside in the rain for hours, while one day prior it was very sunny. Typical Amsterdam weather.

Three years ago! Madonna in the Ziggo Dome in Amsterdam

What It Feels Like For A Girl props from YORIN commercial 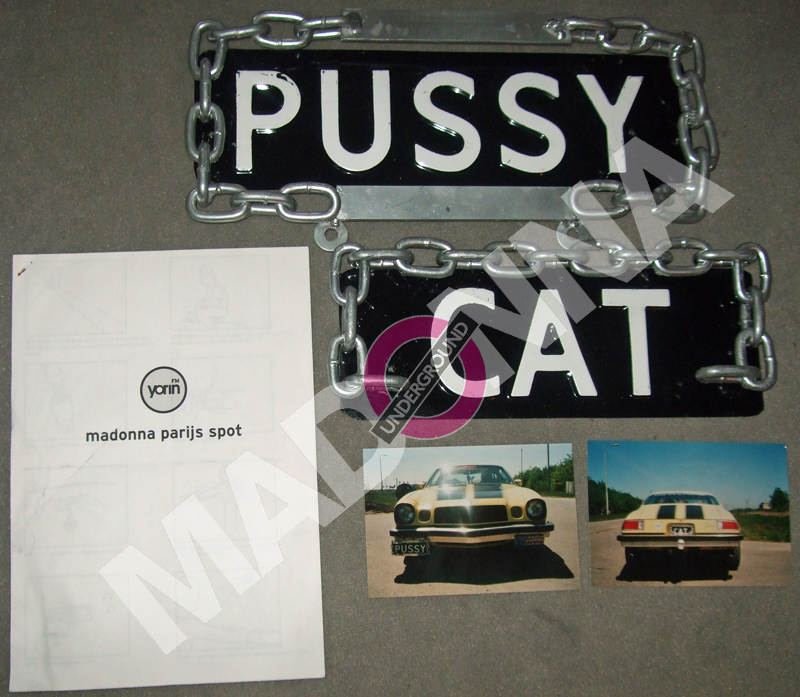 When you think of the What It Feels Like For A Girl video, you instantly remember the Pussy Cat license plates. Back in 2001 YORIN (A Dutch TV/radio channel) recorded a promotional commercial for a contest to win tickets to see M during the Drowned World Tour in Paris. For this they re-created the video and the commercial aired various times on Dutch television (see video below).

The props; license plates, full script and original pictures were later sent to me (Kimberly). 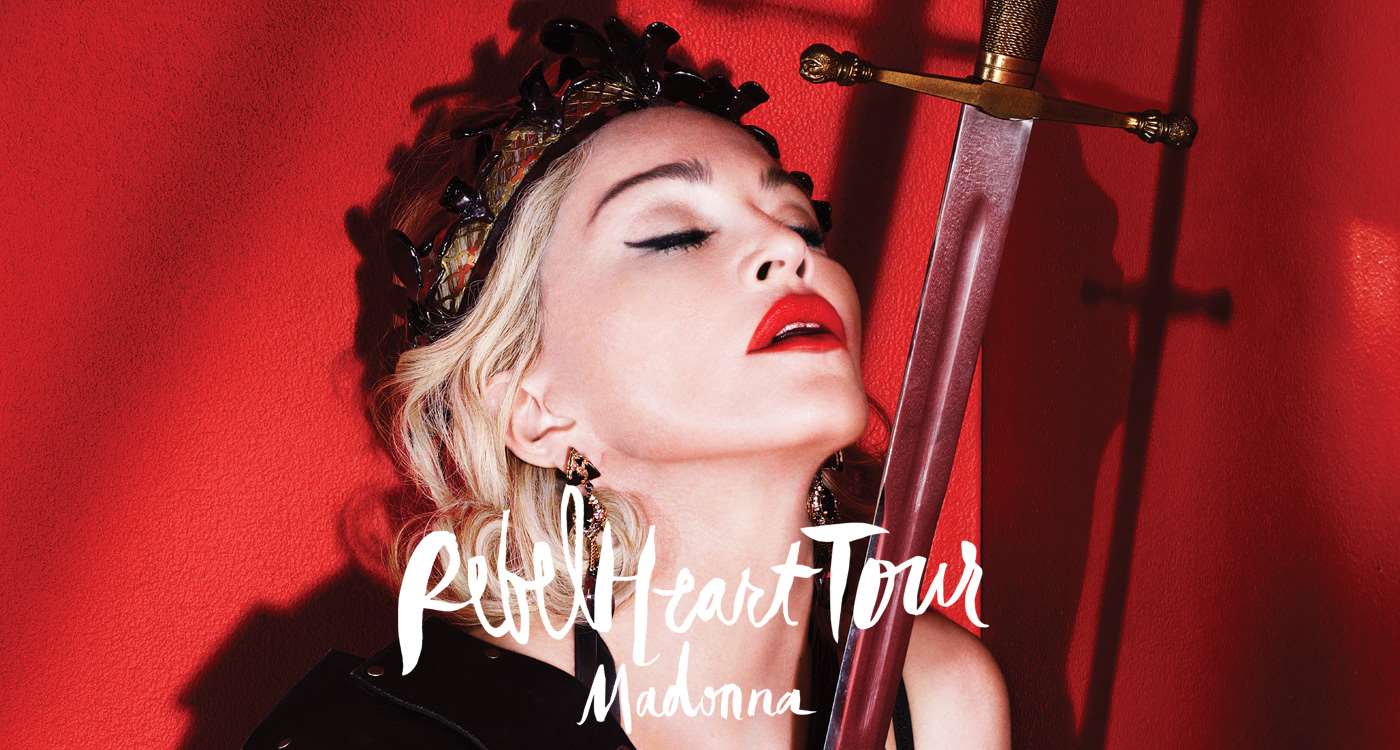 Madonna can do something that none of her contemporaries are able to anymore: fill up large sized venues at high prices. Due to large ticket demand for her Rebel Heart Tour, Madonna added dates to such cities in North America as Miami, New York City, Toronto, and Puerto Rico. In Europe, Madonna added dates in Prague, Barcelona, London, and others.

In New Zealand, the demand for tickets was just as high. According to the New Zealand Herald, only high-price tickets remain for Madonna’s shows there, despite just going on sale yesterday.

It is quite likely that due to the demand for tickets, Madonna will add shows in both New Zealand and Australia. Madonna has been teasing the setlist for her Rebel Heart Tour on Instagram by mentioning such classics as “Justify My Love,” Into the Groove,” “Who’s That Girl,” “True Blue,” and “Like a Virgin.” Do you have tickets for Madonna’s upcoming Rebel Heart Tour?
Read more HERE

Her cheapest tickets sold out in seconds – but some fans have already posted their Madonna tickets on TradeMe.

Tickets for Madonna’s two Vector Arena performances in March went on sale at 10am today with the cheapest $99 tickets selling out in seconds.

New Zealand fans willing to spend more could still find tickets for $500 on sale half an hour after they first became available.

This afternoon, there were four auctions for Madonna tickets on TradeMe, ranging from $690 for two gold tickets for the March 5 show, to $1245 for four tickets in the upper bowl.

The first official Rebel Heart Tour poster is now available through Madonna’s official store, poster will be shipped on July 15 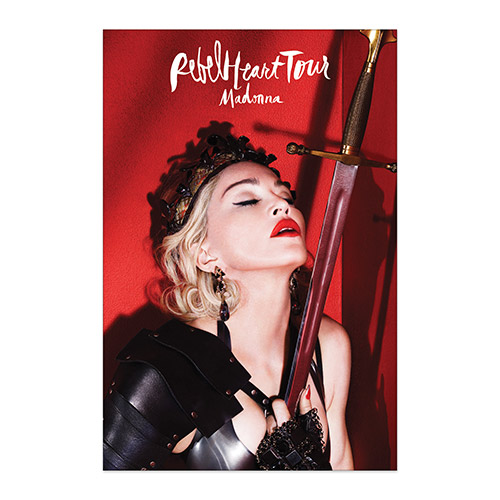 Kiwi Madonna fans are paying thousands of dollars to make sure they don’t miss out on the first, and possibly only, time the Material Girl plays New Zealand.

A frenzy is expected at 10am tomorrow when general-sale tickets, including $2000 front-row seats, are released to eager fans, 33 years since Madonna’s debut single Everybody hit the charts.

Madonna’s Rebel Heart Tour is set for two Auckland shows in March next year though demand could see more dates added, with almost a week between the second stop at Vector Arena on March 6 and the 56-year-old’s next tour date in Melbourne on March 12.

Already, dedicated fans have snapped up a small batch of vogue, pre-sale tickets before tomorrow’s official release – with Auckland super-fan Chris Watts dropping $2600 on premium tickets to both nights.

Watts, 45, who has set up the Facebook fan page “Madonna New Zealand”, has travelled to gigs in Melbourne and New York. He attended shows three nights in a row at Madison Square Garden.

“I’m a member of the Madonna fan club so I purchased VIP tickets Tuesday last week,” Watts told the Herald on Sunday.

In the nine-month countdown to the shows Watts says a fashion designer friend would help piece together “Madonna-inspired” ensembles for the evenings.

Another to guarantee a golden ticket is Hamilton’s Taeghan Magnus-Short, 27, who grabbed a $500 pre-sale pass. “I always hoped she would come to New Zealand, but I thought it might never happen.

“She’s underrated as a musician, but she’s also a great role model for individuality and strength. She loves to light a fire under people. I’m sure she’ll do something crazy on the night.”

• Tickets for the Rebel Heart concerts at Vector Arena on March 5 and 6 next year go on sale tomorrow, July 6 at 10am: ticketmaster.co.nz 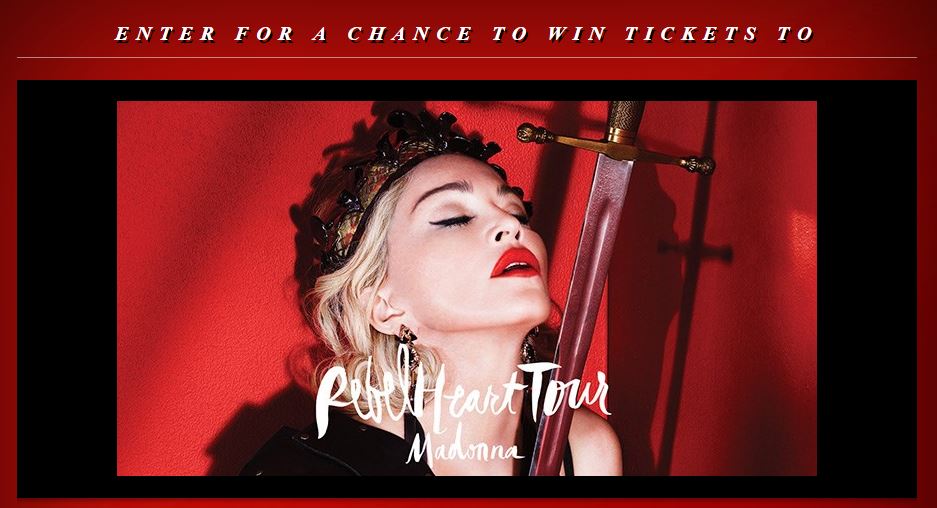 Click HERE for a chance to see Madonna live at MSG!