The latest on Rebel Heart in the Ziggo Dome in Amsterdam this weekend!

We have reported on this before, but just a short reminder

A bit late, but better late than never.

Madonna performed two spectacular shows in the O2 in London, without a doubt one of the best shows to date.

The O2 were shocked when suddenly on the first night, Madonna started the shows at 21.00 sharp (quite a shock for those that have been to previous shows). Idris Elba opened the first London show (refreshing to hear a good DJ set again).

Unfortunately it’s become a thing for some fans to claim seats that aren’t their own, just to be in the front. Unfortunately this led for Oasis’ Noel Gallagher to not get to his rightful assigned front row heart stage seat without the help of Guy Oseary.

Guy Oseary had to literally tell fans to please move, to make room for him, show some respect and do so (without arguing about it). However, Madonna was on fire from the start. The audience was the most enthusiastic I have seen so far, not sitting down once.

Madonna spoke about the tip of the heart stage and comparing it to the top of a penis. Madonna made a very thoughtful speach regarding World Aids day and for those up close, she was clearly touched and teary eyed. She performed the 80’s medley, Who’s That Girl followed by an out of this world version of Like a Prayer. We knew Stella McCartney was going to be an unapologetic bitch, so were surprised to see Graham Norton. But boy, was he amazing!!

The second night at the O2 was still amazing, but not as good as the first night, the crowed seemed, as Madonna stated ‘tired’. She did however start on time again, it is still a mystery to us whoever hired DJ Mary Mac.

She spoke about her dear friend David Collins that passed away the previous year and dedicated ‘Drowned World/Substitute For Love’ to him. The first time she’s performed this song since The Confessions Tour in 2006 and it was absolutely magical. A definite highlight and should be kept in the setlist.

Finally indeed Stella McCartney was the unapologetic bitch, being one of Madonna’s best friends this was a joy to M.

The UK press had nothing but positive things to say and rightfully so. Stay tuned for our gallery of HD shots (hundreds) coming today. 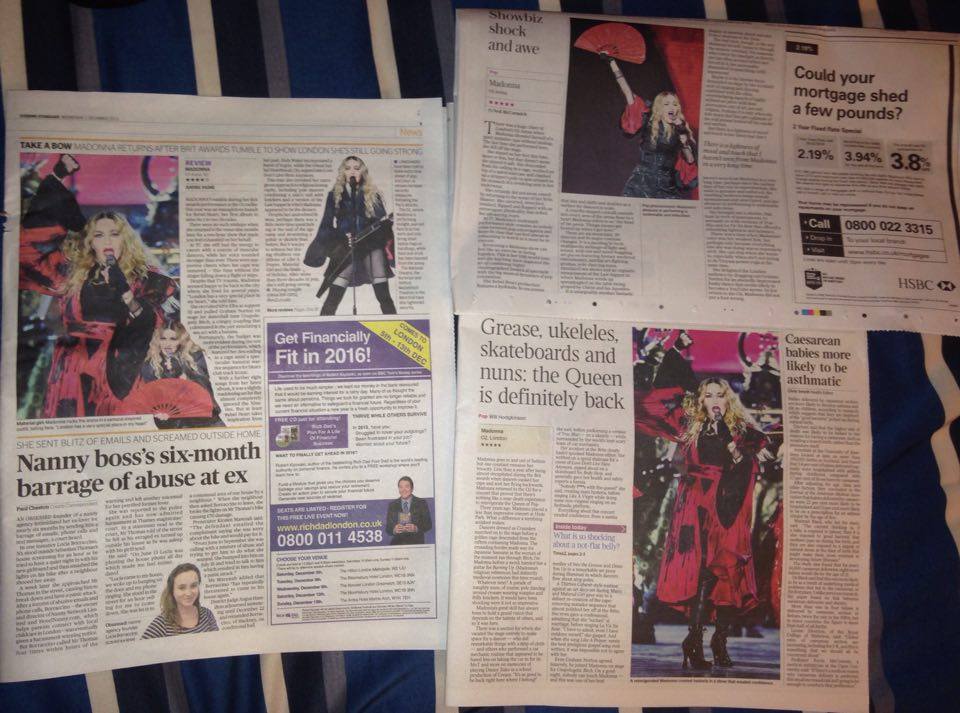 Madonna in the UK press today 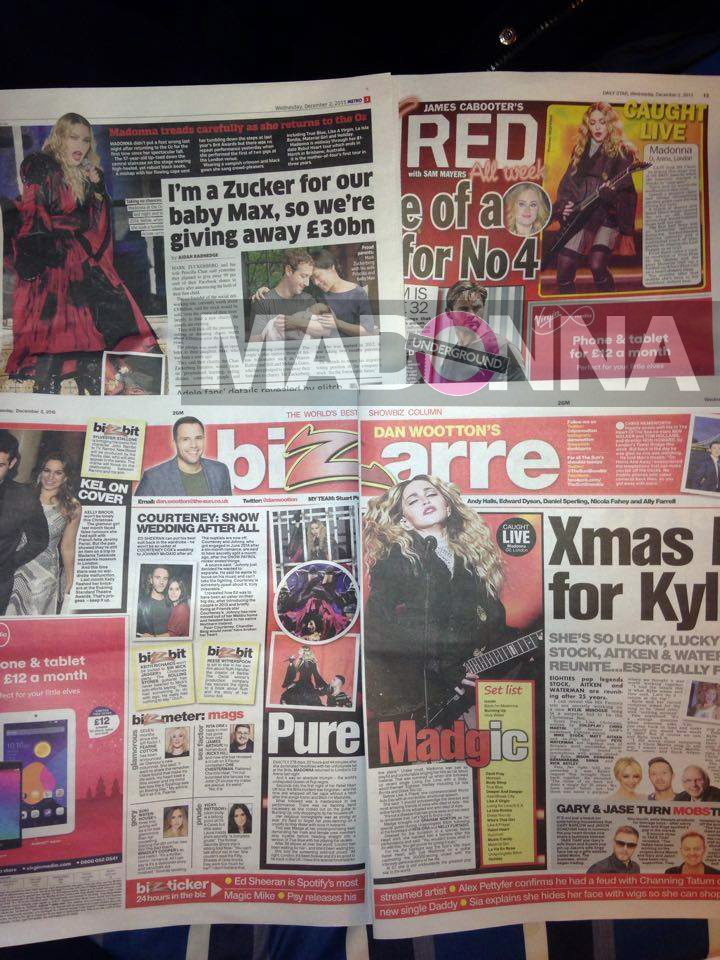 Madonna, O2 London, gig review: It’s religion and rebellion as her Madgeness reminds us why she is such an enduring talent

“London are you ready?” Madonna launches her four-day stint at London’s O2 to promote her 13th album, Rebel Heart, with plenty of bling and swagger. Entering with a host of gold-clad dancers costumed as Roman soldiers, she’s modestly – for her Madgeness – dressed in black sparkly dress and a cape, which perhaps due to a choreography rethink after her fall at the Brits earlier this year, is removed a good few seconds before she strides down the steps to the thrust stage shaped like a crucifix.

The demure costume doesn’t last, of course, she soon strips down, and drops to her knees, her crotch meeting her fans’ eye line to play electric guitar on “Burning Up” from her latest Rebel Heart album and pole dances on a crucifix with dancers dressed in pants and nuns’ habits before reenacting the last supper for “Holy Water” and “Devil Pray”. Can you see a theme developing here?

Undisputed Queen of Pop wows the O2 with huge show

EXACTLY 278 days, 22 hours and 44 minutes after she dominated international headlines with her unfortunate fall at the Brits, MADONNA returned to London’s O2 Arena last night.

And it was an absolute triumph – the world’s undisputed Queen of Pop reigns.

Seconds into the first night of her Rebel Heart UK tour, the Brits incident was forgotten – and this time she whipped her cape off without a hitch after opening numbers Iconic and B****, I’m Madonna.

What followed was a masterpiece in live performance.

There was no backing band necessary as she rocked out on the electric guitar to Burning Up, only stopping to rip her trousers off.

Her religious iconography was as strong as ever too. I won’t forget her pole dancing on a crucifix to Holy Water with a squad of nuns in hot pants in a hurry.

This was Madge at her uncompromising best, demanding her male and female crew members strip topless before heading straight into a version of True Blue with her playing the ukulele.

Madonna has put the painful memory of the Brit Awards behind her with a triumphant return to London’s O2 arena.
The pop star accidentally stole the show at February’s awards when she was pulled backwards down the stairs by a malfunctioning matador cape.
A huge cheer rang around the arena on Tuesday when she performed the same routine without a hitch.
The show also included a surprise appearance from Graham Norton, who gyrated with the star on stage.
And, in a break from her tour’s standard setlist, she played Like A Prayer to highlight World Aids Day.

On december 5th & 6th it’s time for Madonna’s shows in the Ziggo Dome in Amsterdam and you’re going to be there!
Time schedule*:
18:30 – Doors
20:00 – Lunice
20:45 – Break
21:00 – Madonna
23:00 – End of show
Madonna’s tour is being loaded with positive reviews, but please keep in mind that Madonna has a habit of showing up late. She will still perform her whole show as planned, but there is a chance that the show will not end before 11PM. That’s why we would like to advise you to come by car as public transport might not be available after 11PM.
Expected traffic
On Saturday there’s going to be a football match at the Amsterdam ArenA. On top of that, the Dutch public transport has planned trackwork improvement and scheduled changes for the whole weekend, so we expect more traffic than usual around the Ziggo Dome. Please make sure to plan your trip in advance and head to the Ziggo Dome on time.
Security precautions
Due to the recent events in Paris, we have decided to take extra security measures in agreement and collaboration with the artist. Backpacks and other (big) bags are not allowed inside the venue. We’d like to ask you to leave these at home. Small hangbags are allowed, but these will be checked thoroughly. In addition, visitors will be searched. This may lead to longer queues, but we will try to keep this at a minimum. We’d kindly like to ask you for your cooperation and understanding in this exceptional situation. We will do anything to make sure that all concerts will go on as planned in an environment that is both safe and responsible.

George DuBose is offering fans a very special Christmas offer, regarding his excellent Madonna…RAW (a very early concert photography) book. Capturing all of his photographs when he was hired to shoot Madonna on one of her earlier gigs while she was still with Camille Barbone (1981). A true must have for any Madonna collection!

George is offering the following:

There is more coming up, stay tuned! 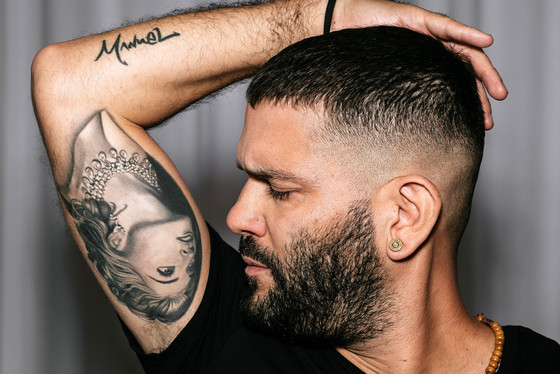 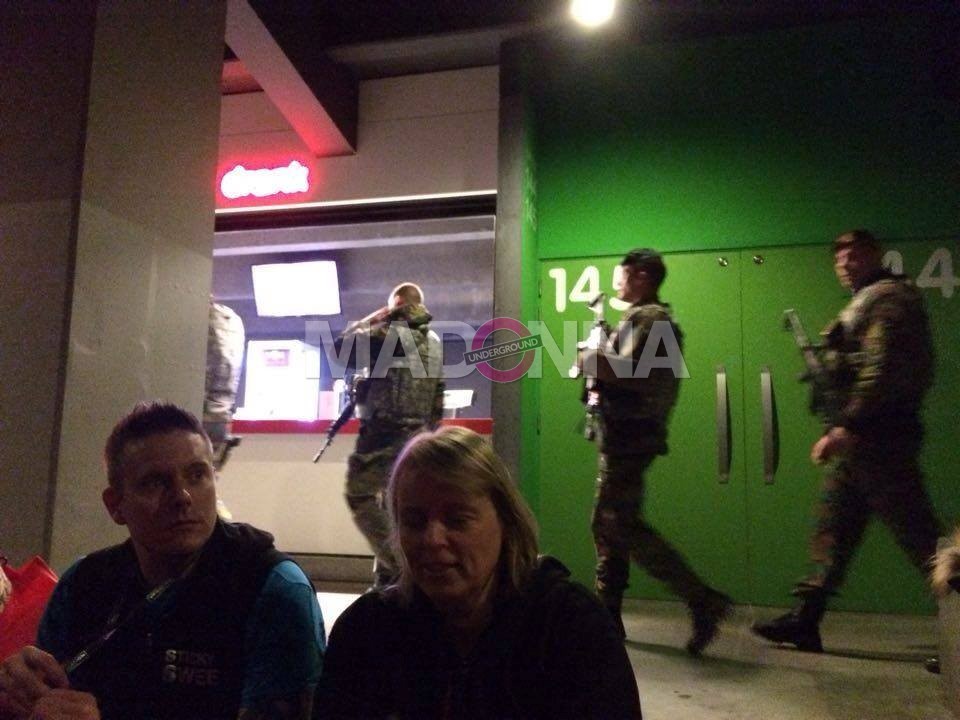