JEAN PAUL GAULTIER says he popped the question to Madonna three times — but she turned him down every time.

The French designer said his proposals were serious but he knew that wedded bliss with the Material Girl singer would be ‘impossible’.

‘Maybe it was because it was impossible that I proposed to her,’ the 67-year-old said. ‘But I wanted to express the fact of how much I was loving and admiring her.’

He also told Tatler: ‘One time, she said something like, “It’s not so good in reality to have a relationship?” All her men had made her suffer.

Gaultier also recalled being flashed at by a kilt-wearing Guy Ritchie, when the film director wed Madonna in 2000.

‘I understood then why she loves him,’ he said. However, the couple divorced eight years later.

Gaultier, who designed one of Madonna’s most talked-about looks — her conical bustier — also defended the 60-year-old’s right to ‘still dance in basques’ and cavort with young men on tracks from new album Madame X.

‘Why shouldn’t a woman be in love with a young man, and a young man with an older woman?’ he asked.

Read the full interview in Tatler’s August issue, on sale and available to download from tomorrow.

Madonna Cements Herself As A Musical Chameleon With ‘Madame X’

“She is a cha cha instructor, a professor, a head of state, a teacher, a nun,” is how Madonna describes her most recent alter ego covering her latest album, Madame X. In the months anticipating its release, the pop icon teased fans with imagery of the eye-patched emissary, in addition to releasing several collaborations featuring Maluma, Quavo, and Swae Lee. Some reviews deem the pop star’s latest release as a bizarre and rambunctious mixture of sound, when in fact, these things make for an interesting and compelling piece of work. This metamorphosis of sound and image reveals not only that Madonna is still a master of her craft, but that she can continue to captivate audiences with bold creativity.

The diversity of Madonna’s discography spans far and wide, ranging from the 1984 classic “Like a Virgin,” to her evolution into modern sound with “Ray of Light.” Throughout these changing eras, the music legend managed to remain at the top of her game, morphing from one persona to the next in an almost seamless way. Her new album is certainly no exception, solidifying Madonna as an ever-evolving songstress with an eye for all things avant-garde.

The singer can add being trilingual to her list of talents, as the album includes songs in English, Portuguese, and Spanish. Influenced predominately from her time living in Lisbon, Portugal, the “Hung Up” belter’s newest release boasts a host of musical influences. Songs like “Faz Gostoso” featuring Anitta  and “Medellín” featuring Maluma are testaments to Madge’s rare ability to effectively cross musical genres. Even more noticeable on one of her solo tracks, “Crazy,” Madonna exudes a comfortable incorporation of both her personal style and an appreciation for multicultural artistry.

Further embellishing Madame X‘s tinge of musical experimentation, Madonna includes hints of hip hop on the songs “Future” featuring Quavo and “Crave” with Swae Lee. But the album’s prized gems are arguably the dance-floor anthems “God Control” and “I Don’t Search I Find,” which are reminiscent of Confessions on a Dance Floor.

Opening with a somber choir and a call to action advocating for gun control in America, “God Control” gives way to a disco wonderland. “This is your wake up call,” Madonna utters over the sounds of two gunshots and a boogie beat, a seemingly paradoxical juxtaposition. By being able to make us dance to a grim message with a celebratory tone, it is evident that Madame X herself is able to successfully apply her artistry in every facet.

According to Billboard, over 90% of Madonna’s 17-show-run in New York is sold out. In addition, Madame X  debuted at #1 on the Billboard 200 chart with 95,000 copies sold , giving the “Music” singer her first number one since her 2012 anthology, MDNA.

If Madame X tells us anything, it’s that Madonna still takes her artistry and legacy seriously. The icon has added yet another acclaimed piece to her body of work that also happens to be one of her most eccentric efforts yet, which in turn, may become her most successful. 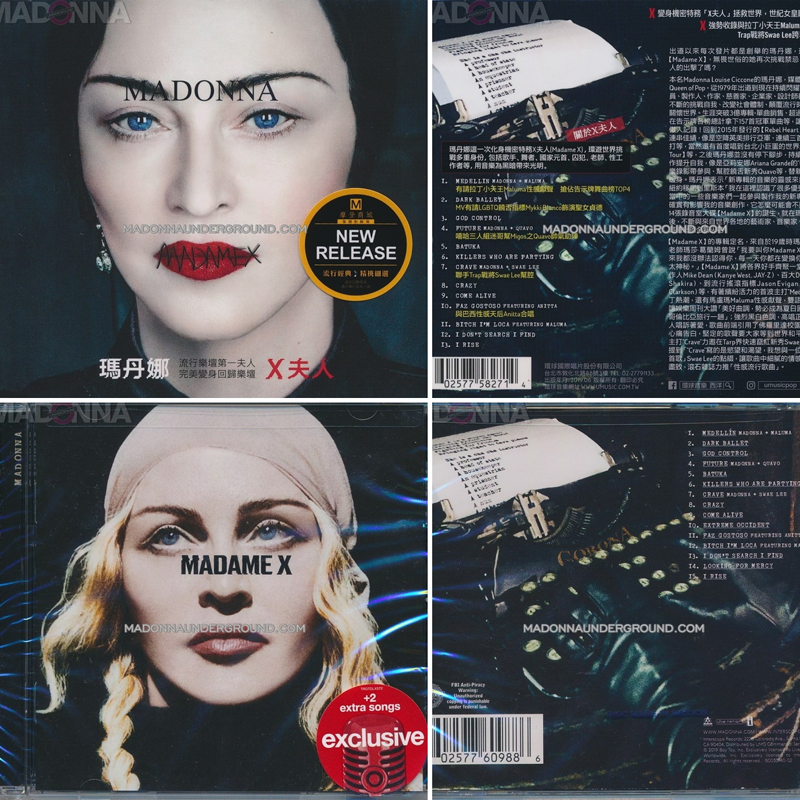 Madame X discography has been updated with two new items:

“All people are lonely. Me too.” (Madonna in the new ZEIT Magazin)

CELEBRATE PRIDE WITH PELOTON AND MADONNA

As part of their Pride celebrations, Peloton is teaming up with Madonna for a weekend of themed workouts.

From June 27th-30th, Peloton will offer cycling, running, and yoga classes with a Madonna-themed soundtrack. For each of the Madonna classes taken that weekend (live or on-demand), Peloton will donate $1 to The Center, a community group that supports LGBTQ+ youth in the NYC area.

Madonna, a Peloton user herself, is excited about the collaboration. In an interview with ET Canada, Madonna said:

These themed workouts and money raised for The Center, an organization that I’m incredibly passionate about, will be a positive way to reinforce the message of inclusion and promote wellness within the LGBTQ+ community.

Peloton is also partnering with Madonna in support of her new album, Madame X, which will be released on June 14th (Available on CD/Vinyl or streaming).

The Madonna collaboration is just one part of Peloton’s Pride celebration. There are “Pride Rides” scheduled throughout the month of June. This year there will also be Pride-themed run, yoga, and boot camp classes. You can receive a Pride badge for participating in any of these classes during the month of June. Peloton has also released a limited edition Pride clothing line, the proceeds from which will also benefit The Center.

On Hating Madonna Today, the world’s most accomplished pop star provokes ire and indifference. Where did she — or we — go wrong?

….’The sad thing about Madonna’s disrepute is that doubters have no idea how interesting she still is. “Madame X” is more original than half of what her younger contemporaries are doing. Some of the overt politicism doesn’t work, but when it does, Madonna’s ear for catchy beats and rousing vocal inflections is as keen as ever. Like David Bowie’s “Blackstar,” it’s the sort of thing that seems destined for a reevaluation once Madonna has left this earthly plane and can’t be taked her for granted anymore — in other words, once she is finally deified, leaving behind acrobatic tours and era-defining bops.

That’s the great tragedy of Madonna’s late career. She wrote the playbook time and again, and she won’t be alive to see the world acknowledge it. 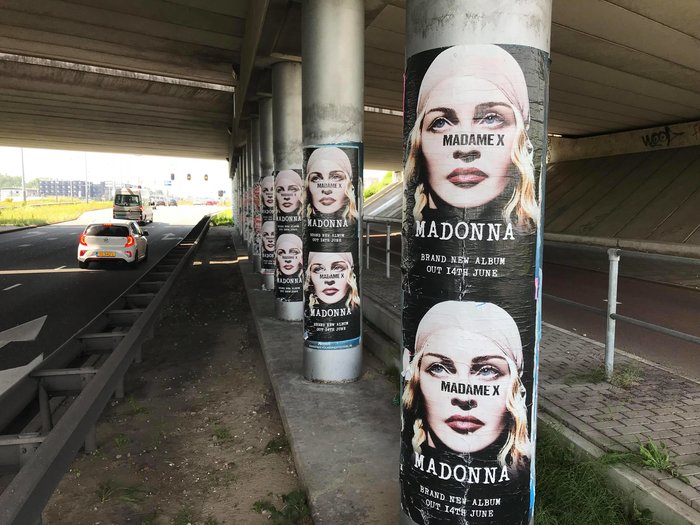 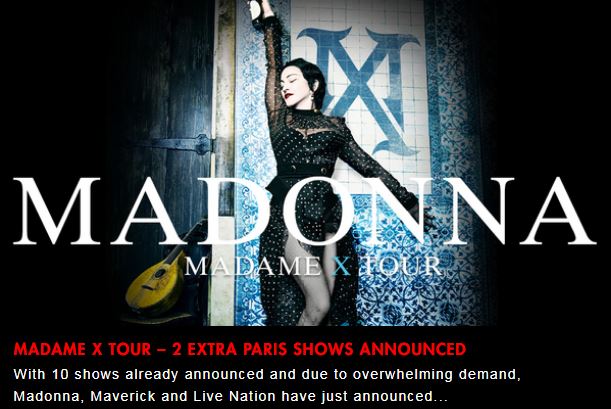 With 10 shows already announced and due to overwhelming demand, Madonna, Maverick and Live Nation have just announced 2 additional Madame X shows at the Grand Rex in Paris on 3rd and 4th of March!

Tickets to these newly added shows will be released for general sale Friday, 28 June at 10:00am CEST at ticketmaster.fr

– Icon Lifetime Legacy members will be assigned unique presale codes.
– If you are a Lifetime Legacy member, your unique presale code is assigned directly to your Madonna.com account, found on your logged-in Profile page or Tour page starting prior to 10am CEST on 26 June.
– Your unique access code is valid for up to four (4) tickets total, and it can be used across multiple shows. EXAMPLE: 4 tickets to one event only, or 2 tickets for one event and 2 tickets for another event and so on.
– All sales are final. No refunds.
– The Icon Legacy Member / Citi card holder Presale will close on Thursday, 27 June @ 18:00 CEST.

Madonna Nabs Her Ninth No. 1 Album With ‘Madame X’

Pop icon Madonna is back at No. 1 on the Billboard 200 with her new album Madame X, which easily snags the top spot on the all-encompassing tally, beating a handful of debuts, including one from another legend: rocker Bruce Springsteen.

Madame X was preceded by two proper singles, “Medellin” with Maluma and “Crave” with Swae Lee of Rae Sremmurd fame. Three additional promotional singles—“I Rise,” “Future” with Quavo and “Dark Ballet”—were also shared before the album was available in full. So far, none of those songs have reached the Hot 100, though that may change when that tally is refreshed.

Madonna lands her ninth No. 1 album on the Billboard 200 chart as Madame X enters atop the tally. The set, released via Interscope Records on June 14, launches with 95,000 equivalent album units earned in the U.S. in the week ending June 20, according to Nielsen Music. Of that sum, 90,000 were in album sales.

The Billboard 200 chart ranks the most popular albums of the week in the U.S. based on multi-metric consumption as measured in equivalent album units. Units are comprised of traditional album sales, track equivalent albums (TEA) and streaming equivalent albums (SEA). The new June 29-dated chart, where Madame X bows at No. 1, will be posted in full on Billboard‘s websites on June 25.

Madonna continues to have the second-most No. 1 albums among female artists, trailing only Barbra Streisand, who has 11. Among all acts, The Beatles have the most No. 1s, with 19. They are followed by Jay-Z (14), Streisand and Bruce Springsteen (both with 11), Elvis Presley (10), Eminem, Garth Brooks, Madonna and The Rolling Stones (all with nine).

Madame X’s debut week was comprised of 90,000 in album sales, which is the fourth-largest sales week for an album in 2019 by a woman. The album’s sales were bolstered by a concert ticket/album sale redemption offer with the Queen of Pop’s upcoming theater tour (starting on Sept. 12 in New York at Brooklyn’s Howard Gilman Opera House), as well as an array of merchandise/album bundles sold via her official website.

Madame X was led by the track “Medellín,” with Maluma, which climbs 2-1 on the Dance Club Songs chart dated June 29, marking Madonna’s 47th leader on the tally. (The chart, like the Billboard 200, will refresh on Billboard’s website on Tuesday, June 25.) “Medellín” also reached the top 20 on the Hot Latin Songs chart.

Before Madame X dropped, four more preview cuts were issued: “I Rise,” “Future,” with Quavo, “Crave,” with Swae Lee, and “Dark Ballet.” “Crave” recently debuted on the Adult Contemporary airplay chart, and holds at No. 15 on the most recently published list (dated June 22).

Fun fact for chart watchers: With Madonna and Springsteen at Nos. 1 and 2 on the new Billboard 200, it’s the first time the Queen of Pop and The Boss have been in the top two together since 1985. The last time they were buddies in the top two (and the only time before this week) was for four weeks in January and February that year. On the charts dated Jan. 26 and Feb. 2, 1985, Springsteen’s Born in the U.S.A. and Madonna’s Like a Virgin were Nos. 1 and 2, respectively. Then, the titles flipped ranks on Feb. 9 and Feb. 16. (Born spent a total of seven weeks at No. 1 and Virgin ruled for three weeks.) 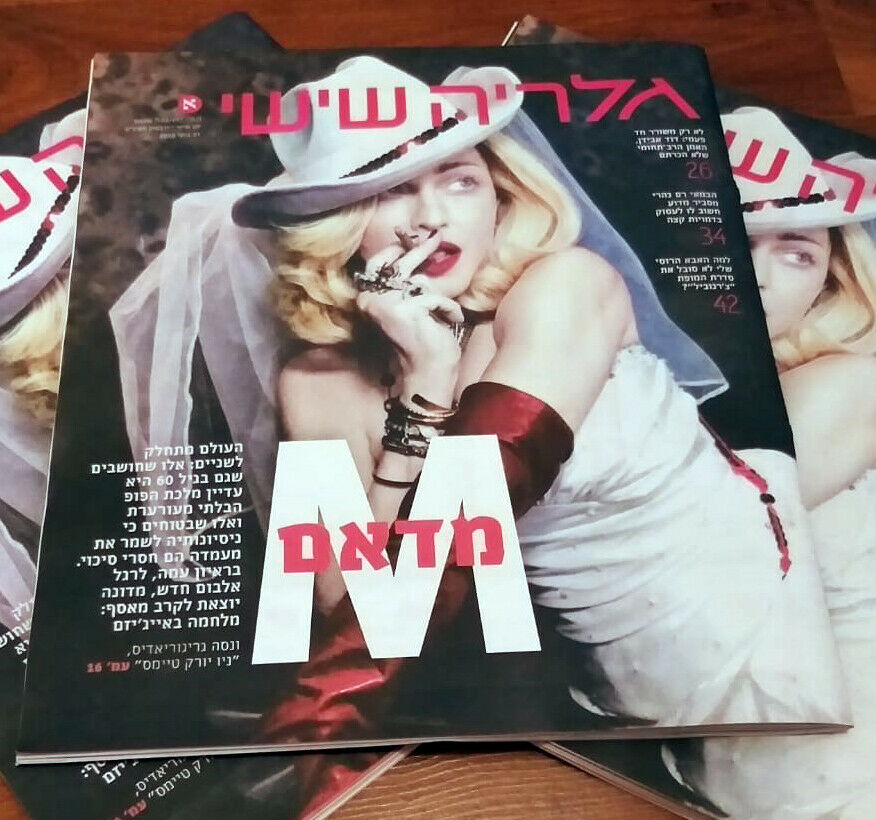