MADONNA REINVENTS SELF ON ‘MADAME X’

ALBUM WAS RELEASED ON JUNE 14TH Thirty-seven years and 14 albums later, Madonna does the predictable on her latest release, Madame X … reinvent herself. After living in Portugal for several years, Madame X is heavily inspired by the country’s rich traditional and modern eclectic music. It’s far from perfect, but there’s beauty even in imperfections, and while it doesn’t stand up to Madonna’s best work, it is the best album she’s released in recent years.

Upon first hearing, the mix of musical styles shows Madonna, even at 60, is up to date on current musical trends, what the “kids are into these days”. Her voice, albeit a bit deeper, sounds as potent and sexy as it does from her Ray of Light days (arguably Madonna’s best album). Madonna performs each of the 13 tracks effortlessly and production-wise, Madame X doesn’t sound like a pop star trying to sound modern. It’s Madonna after all, claiming her rightful place and setting the trends, musically.

From the sounds coming from a sweaty hot downtown club in New York City, Spanish and Afro drumbeats, and plenty of Latin influences, Madonna returns to her dance music roots but also dwells into politics (maybe a little too political), introspection, and of course Madonna’s trademarked not giving a damn what people think of her or what they may think of Madame X. That’s made quite clear on “Come Alive” where Madonna doesn’t care about one’s opinion, or “I Rise”, the grand, closing track where Madonna declares there’s nothing anyone can do to keep her down, she’s been through it all and won the battle every time.

The beautiful ballad “Looking For Mercy” is a bit out of place on Madame X but again, it’s Madonna and the way the music sounds and passionate lyrics are standard Madonna love songs. Yet the politically uneven “Killers Who Are Partying” where Madonna claims she will be poorer if Africa falls seems empty especially when Madonna is one of the world’s richest entertainers.

But the real highlights such as “Come Alive”, a track that will be standard on every Madonna concert, and “Medellin” where Madonna performs with Colombian artist Maluma, is as Latin as you can get for a white pop star.

Madame X is a strong effort, showing that Madonna has no plans to give up her throne as the Queen of Pop. The few setbacks can’t override what is Madonna’s best work in years. Madonna is back!

[Read More at themusicuniverse.com/madonna-reinvents-self-madame-x/?fbclid=IwAR2tejDFwnzuHHbzZZhm2-1z01qzrFMwnq4eadJGjI2NjMTGSYJLN7IFjdY © The Music Universe. All Rights Reserved.]

Buddy and Julie Miller, Madonna, Mindi Abair and the Boneshakers with the new and noteworthy

Madonna, Madame X (Interscope) – Given her irregular television and stage appearances in recent months, Madonna could have made a much worse studio album than the surreal globe-hopping concept album here. Critics might perceive Madame X as a superficial romp through Latin American styles, but Madonna weaving a playful mystery tale offers far more choice moments than her recent albums that tried to reclaim sexuality in her sixth decade. 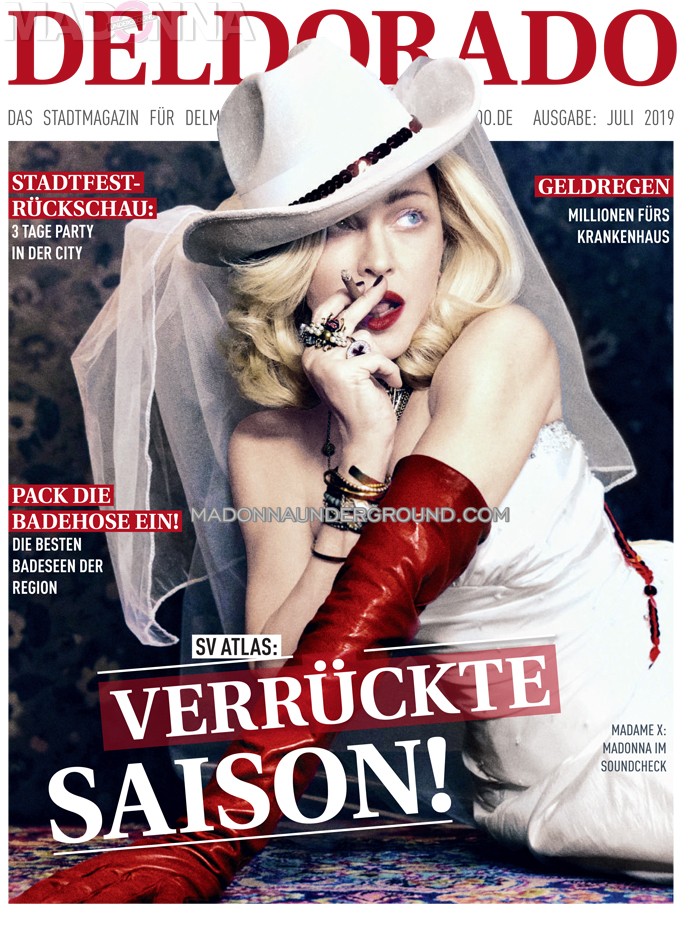 Madonna is on the cover of German regional magazine Deldorado, to check out the PDF format of the magazine click HERE

We have just added the full MOJO interview with Madonna in the press section of the Madame X page HERE (press tab).

It has taken a while but the August edition of MOJO is now finally available on newsstands in The Netherlands too. Besides the interesting interview there’s also the four star review by Lucy O’Brien.

Check out the full scans HERE

Madonna can sing at Eurovision 2020 despite her Palestinian flag stunt, Rotterdam says

The Dutch city’s council voted down a motion to ban the pop star from the contest over her use of a Palestinian flag on stage in Israel at the competition in May. The motion was proposed by a member of the staunchly pro-Israel and anti-Muslim Party for Freedom.

Last week’s draft motion described the Palestinian flag as “a symbol for the rejection of Israel” and cited growing anti-Semitism in Rotterdam. It did not mention the fact that the singer’s performance in Tel Aviv also featured an Israeli flag.

Hidde van Koningsveld, the head of the pro-Israel CiJo group, noted the omission on Twitter  and called the draft motion “nonsensical.”

Of the City Council’s 45 members, 37 voted against the proposal by Maurice Meeuwissen, chairman of the Party for Freedom.

During Madonna’s performance in Tel Aviv, despite Eurovision’s policy banning political statements, dancers at one point wore Israeli and Palestinian flags. It was construed by many as a plea for peace.

The Netherlands won the 2019 contest and thus will host the 2020 edition, though organizers have not yet determined in which municipality.

The soundtrack to the third season of Stranger Things features Madonna’s ‘Material Girl’, to pre-order click link below 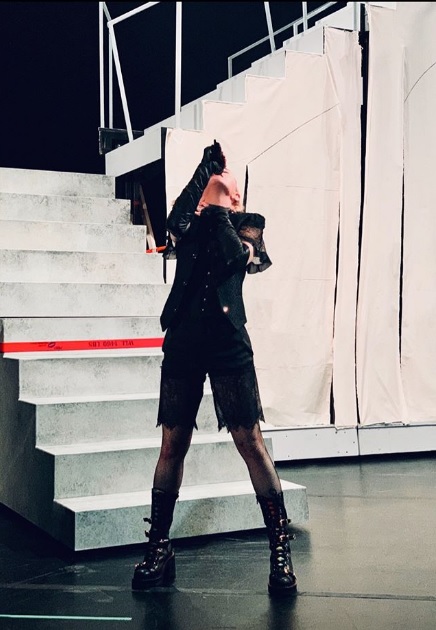 Madonna is in the midst of her Madame X Tour rehearsals. There were those files with the song names on them and today we heard ‘Easy Ride’ in her Instagram stories and another re-invention is on its way for ‘Human Nature’ it seems.

If you want to stay spoiler free you should avoid her Instagram (stories) at all costs! 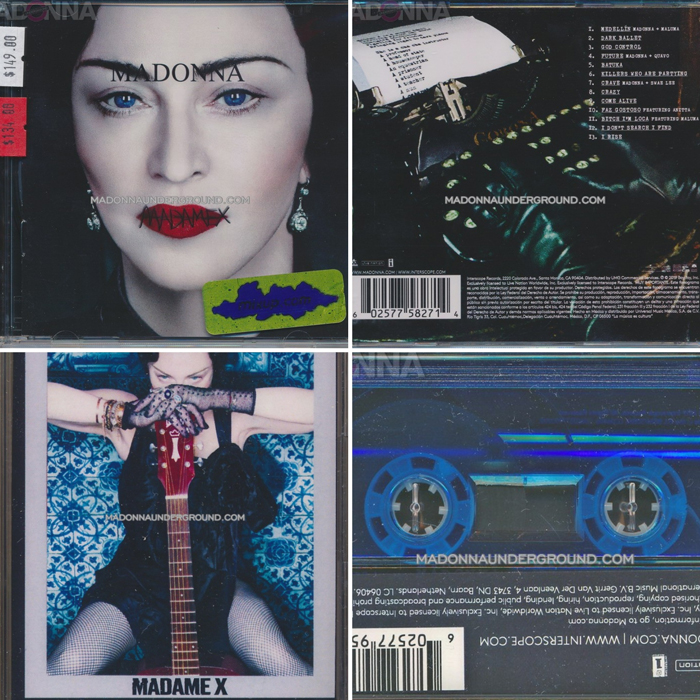 Will.I.Am on wanting to work with Madonna

WILL.I.AM has revealed he lives in fear that companies are listening to his private phone calls.

The kooky Black Eyed Peas frontman insists he would never dream of calling up an artist to ask to work with him in case the phone call is being tapped into and they steal his ideas.
Chatting exclusively to Daily Star Online at the 2019 Nordoff Robbins Silver Clef Awards  in London, Will said he hopes to hit the studio with Queen of Pop Madonna – though has to wait until they meet face to face to put plans into motion.Will said: “Hell yeah, I would love to work with Madonna, are you crazy? Madonna is Madonna.
“But with collabs you need to be in front of their face.“If I am going to ask Madonna to work, I wanna see her in the face.

“I don’t want to go through a phone and let some other company hear and have my conversations.”

Insisting he worries about being listened to, Will added: “Why would I want to give my conversation to someone else?”

Last month Madonna released her most experimental and progressive album yet in the form of Madame X.

On the album Madge teams up Maluma and Anitta on a number of tracks and like Madge The Black Eyed Peas have also secretly recorded two songs with the latino stars.

However, despite the album topping the charts in the US and bagging the number 2 spot in the UK, Will.i.am hasn’t heard the record.

Madonna has claimed boredom was the precursor to stepping into the studio recently. The superstar singer has said she made her most recent albums ‘reluctantly’ and while she was trying to get something else made – such as a film.

The 60-year-old singer – who has children Lourdes, 22, Rocco, 18, David, 13, Mercy, also 13, and six-year-old twins Estere and Stelle – was instead planning to make a new movie but found herself back in the recording studio when she was bored of raising the funds for the film project. Asked how she suddenly finds herself with ideas and knows it’s time to make an album, she told Mojo magazine: ‘Sometimes that happens. But it has definitely not happened in the last… three records.

‘Honestly, the last couple of albums, I’ve made them reluctantly. ‘Both times I was trying to do something else – get a film made. ‘That happened on this record too. I moved to Lisbon because I wanted my son [David] to be able to attend a soccer academy and then I was trying to raise money for a film and then I got bored waiting and then I ended up making a record.’

There are times, according to Madonna, when she simply had to record music, when she had ‘lots of ideas stirring’ in the melon and a ‘burning desire’ to release a record. ‘Ray of Light would be one’, she said, before adding Like A Prayer was also on the list.

‘But my life was simpler then. Like A Prayer – I was married to Sean [Penn] and I had no children and my life was very simple. ‘Ray of Light, I had my daughter, but again, I didn’t have such a complicated life.

Now my life is complicated.’ Still, you can’t fault the woman for putting her mind to her music once she gets in the studio because her time is so limited, as she rattled off her busy life: ‘…Taking care of six children and they live in three different countries and you’re doing other jobs and taking care of other people.’

The Madame X singer said she’s been working ‘for years’ on a screenplay and is also in line to direct. She was recently forced to defend the music video to her song God Control, which appeared to show explicit scenes of a nightclub shooting, which left survivors of the 2016 Pulse shooting ‘traumatised’.

The track depicts someone opening fire with a machine gun in a brightly coloured disco. The singer later defended the video choice, seeing it as a call to action for those in charge to take notice.

She told People: ‘Seeing the reality, and the brutality of things makes you wake up. This is really happening. This is what it looks like. ‘Does it make you feel bad? Good, ’cause then maybe you will do something about it.’

LAS VEGAS, July 3, 2019 /PRNewswire/ — Casino players nationwide are on the EDGE of their seats with excitement, enjoying games in Aristocrat’s new EDGE X™ cabinet. The all-new cabinet made its official launch at the Indian Gaming Tradeshow and Convention, and now it is appearing on casino floors across the U.S. 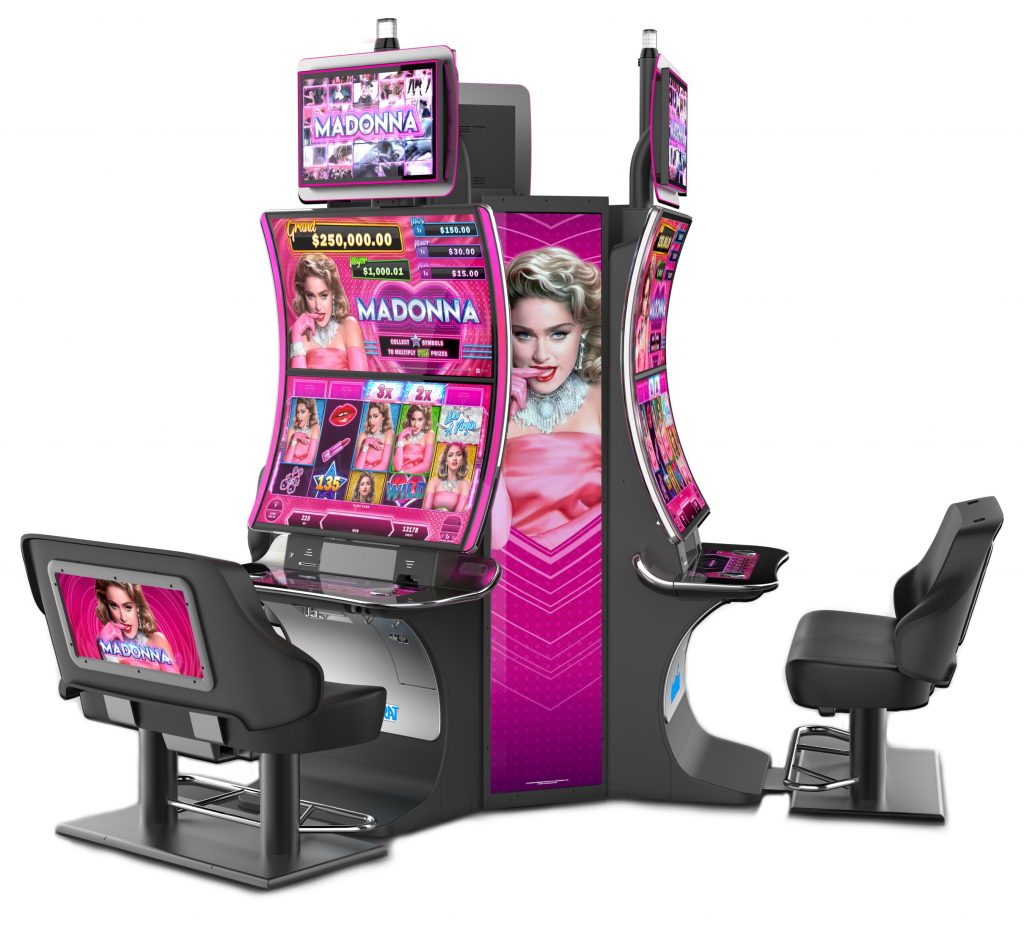 The FarmVille game is based on the FarmVille Social builder and FarmVille Social slots enjoyed by more than 100 million players worldwide. Slot players will find all of their favorite characters, farm animals, and livestock. The game features Persistent Free games and the popular Mighty Cash Hold & Spin mechanic. Adding to the fun is a single-site progressive with grand jackpot starting values of $2,500 or $5,000.

Players can find where to play by visiting www.aristocrat-us.com/where-to-play. Information on responsible gaming is available at www.aristocrat.com/sustainability/responsible-gambling-game-play.

About Aristocrat Aristocrat Technologies Inc. is a subsidiary of Aristocrat Leisure Limited (ASX: ALL), a global games leader with more than 5,000 employees. The company is licensed in around 300 gaming jurisdictions, operates in more than 90 countries, and offers a unique blend products and services. The company’s mission is to bring joy to life through the power of play. Its values are rooted in creativity and technology, and the company has a rich history of innovation that has shaped the gaming industry over many decades. For further information, visit the company’s website at http://www.aristocrat-us.com. 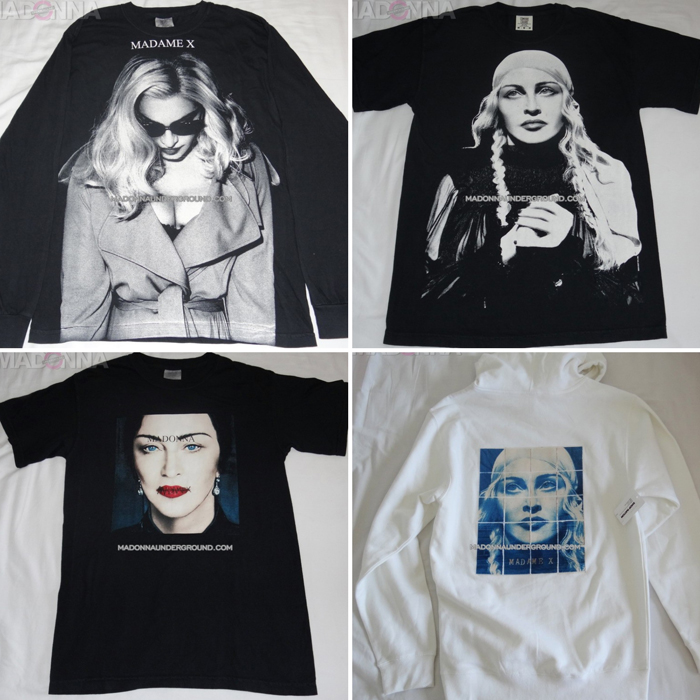 Added to the ‘memorabilia’ section of our Madame X page are four official shirts/hoodie from the recent pop up store in New York. Note that these were also available to pre-order through the official store (also as part of ‘bundles’) but many fans have yet to receive their orders.

Here pictured are the actual items.

To check them all out separately click HERE (memorabilia tab)

Belgian Humo magazine has included a five-page interview with Madonna in their current issue (July 2). The interview is actually the New York Times one translated to Dutch.

It is available at newsstands that stock Humo.

To check out the entire interview click HERE for full scans. 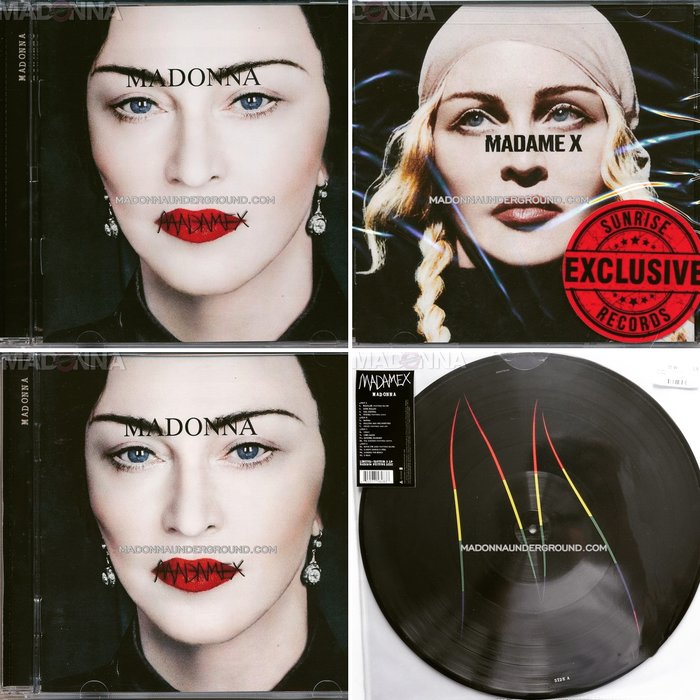 We have updated the Madame X discography with the following items: