Members of Russian Punk Band Get Warm Greeting in Brooklyn

“I’d like to thank Pussy Riot,” Madonna said, “for making the word ‘pussy’ a sacred word in my household.”

She was speaking from the stage of the Barclays Center in Brooklyn, introducing two members of that Russian activist group, who had recently emerged from prison not just outspoken women and critics of President Vladimir V. Putin of Russia, but global symbols of rebellion. On Wednesday night, Nadezhda Tolokonnikova and Maria Alyokhina were two of the main attractions at a benefit concert for Amnesty International, where the musical stars included Blondie, Tegan and Sara, Imagine Dragons and the Flaming Lips, and the message was one of supporting human rights.

Madonna did not perform, but, in head-to-toe black, read from a long statement to welcome Ms. Tolokonnikova and Ms. Alyokhina, known to their fans as Nadya and Masha.

“It’s not a coincidence that I was on tour and that I happened to be in Moscow the day that Pussy Riot went on trial,” Madonna said, because she had been horrified to hear of their 2012 arrest, on charges of hooliganism, for performing an anti-Putin song in a Moscow cathedral. She added that she had been threatened with arrest herself, for performances in Russia that were said to promote “gay behavior.”

Pussy Riot is free at last! Can i get a Hell Yeah! #revolutionoflove #artforfreedom 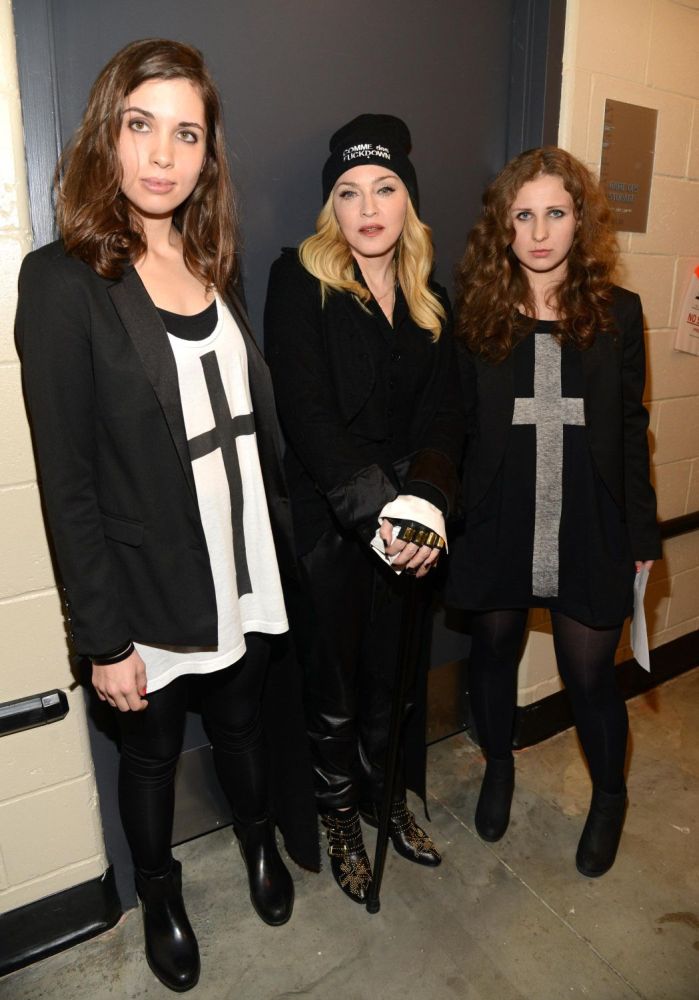 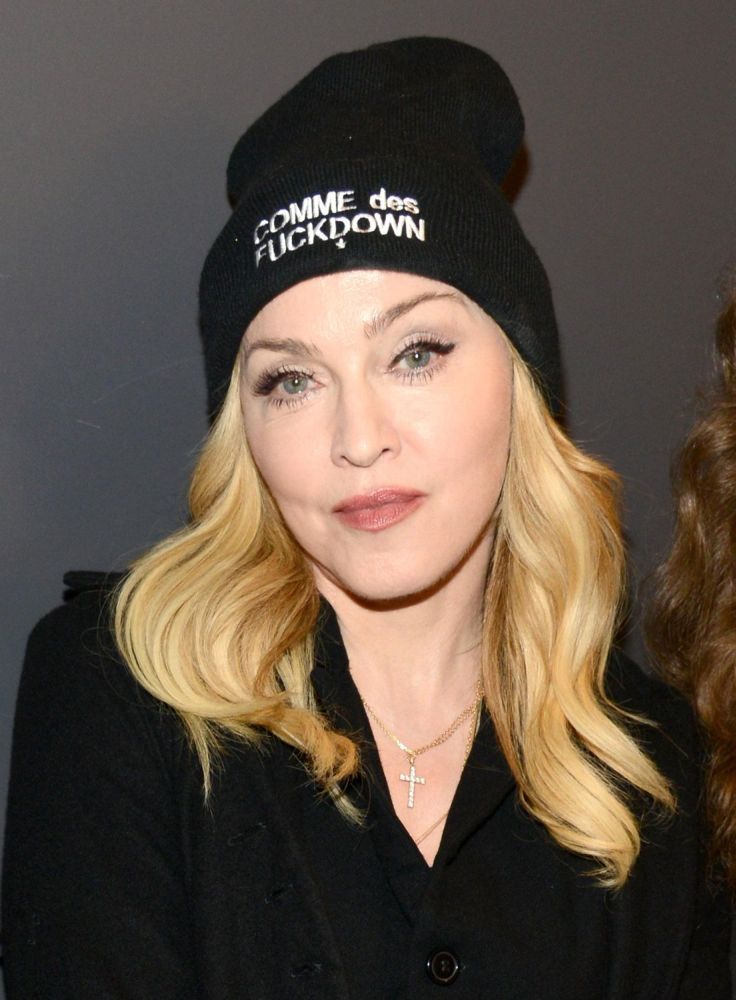 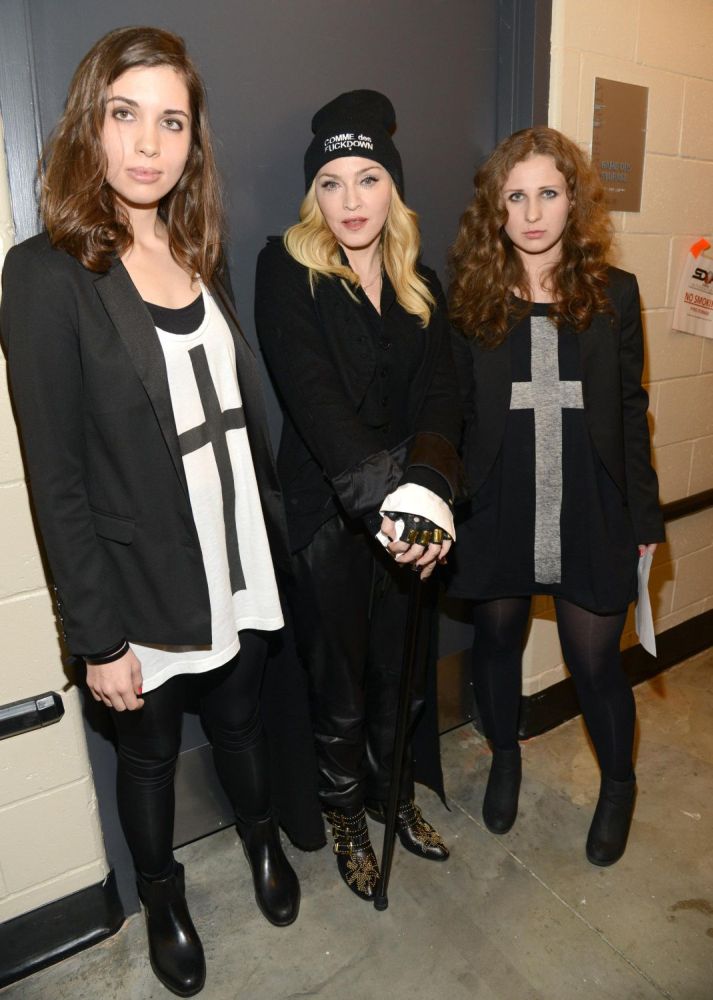 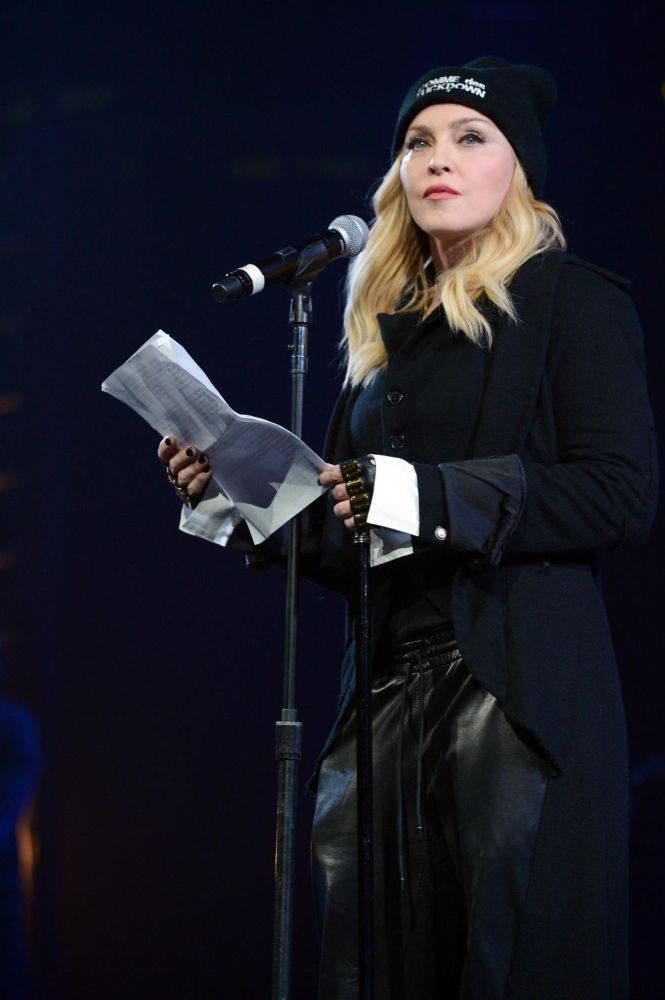 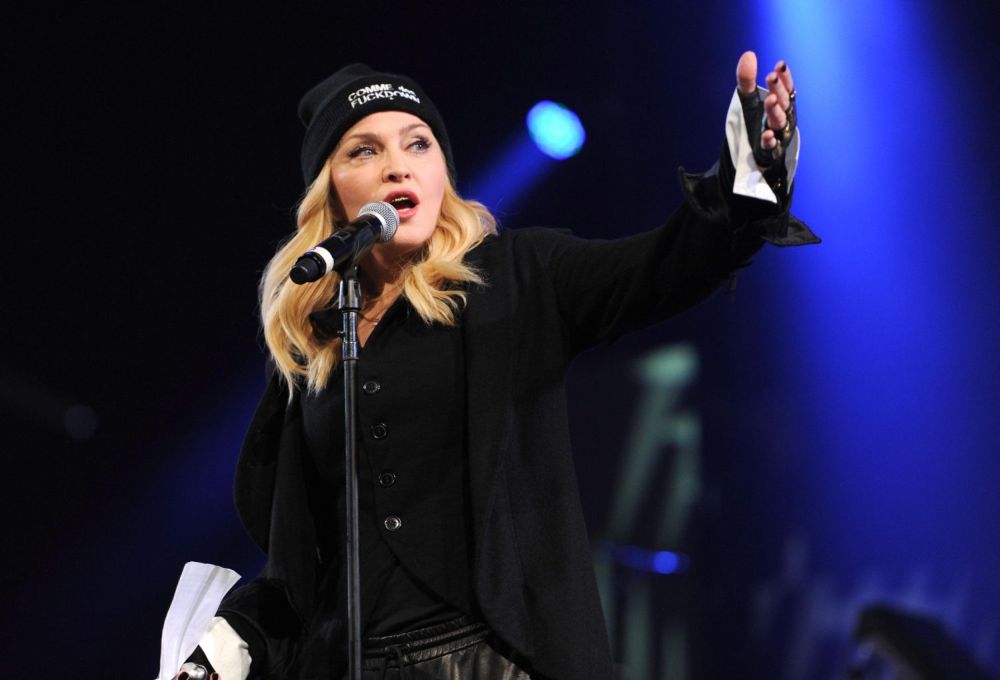 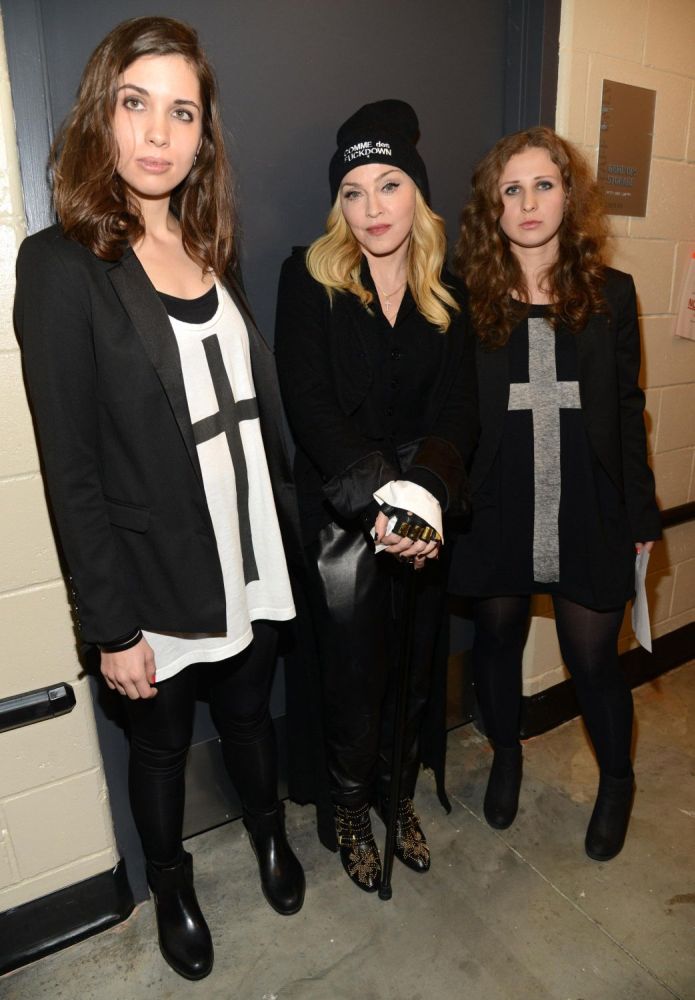 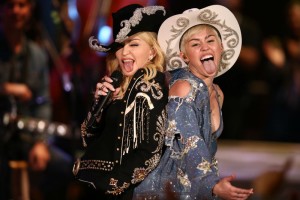 If you missed out on the MTV Unplugged special with Miley Cyrus and Madonna on the Dutch MTV tonight, here are more air dates and times:

On the eve of the 2014 Sochi Olympics in Russia, thousands of human rights supporters will descend upon the Barclays Center in Brooklyn, NYC for an unforgettable night. Imagine Dragons, Flaming Lips, Ms. Lauryn Hill, Tegan and Sara, Cold War Kids, Colbie Caillat, The Fray, Cake and others will perform. Madonna will take the stage to announce members from Russian art collective #PussyRiot, who were recently freed from prison after 21 months (and hundreds of thousands of online actions by Amnesty activists).

Tickets start at $27!! Buy yours now at amnestyusa.org/tickets.

“Amnesty’s past concerts have featured some of the greatest artists of our generation and have been catalysts for real, measurable change. It’s an honor to perform as part of this event and continue the cause of championing human rights around the world.”
— Dan Reynolds, lead singer of Grammy-nominated rock band Imagine Dragons

“We are happy to support Amnesty International’s work on behalf of human rights and political prisoners. We, more than anyone, understand how important Amnesty’s work is in connecting activists to prisoners.”
— Nadezhda “Nadya” Tolokonnikova and Maria “Masha” Alekhina, members of Pussy Riot who were jailed in 2012 for publicly criticizing Russian president Vladimir Putin in a church

“I am honored to introduce my fellow freedom fighters Masha and Nadya from Pussy Riot. I have admired their courage and have long supported their commitment and the sacrifices they have made in the name of freedom of expression and human rights.”
— Madonna

Events include Madonna leading workout with Hard Candy Fitness members from around the world, master classes for members throughout the day, local DJs and live mural creation by famed urban artist Mr. Brainwash

Toronto, ON – The Toronto grand opening of Madonna’s Hard Candy Fitness® on Tuesday, February 11 will not only include a master class taught by Madonna for Hard Candy Fitness members from around the world, but will also feature a live on-site creation of an 11 by 30 foot mural installation by the internationally renowned artist Mr. Brainwash. Madonna previously collaborated with Mr. Brainwash on the creation of the cover artwork for her 2009 multi-platinum Celebration album.

Hard Candy Fitness is a global luxury fitness brand in partnership with Madonna and New Evolution Ventures (NeV). The official celebration is Tuesday, February 11 at the brand’s newest and largest club located in the heart of Toronto in the Aura building at College Park. The facility first opened late last year in October.

Madonna will lead her signature Addicted to Sweat cardio-based dance class with club members from around the world as part of the day’s festivities. For Hard Candy Fitness Toronto members who did not get the chance to participate in the class with Madonna, the Hard Candy Fitness Performance Team will be leading group fitness classes throughout the day prior to Madonna’s arrival. True to the brand’s concept of mixing fitness with entertainment, dance and music, local Toronto DJs will also be performing throughout the day and evening.

For more information about the Toronto club’s membership opportunities, please visit hardcandyfitnesstoronto.com or call 416.979.1645. The brand is expected to announce additional locations this year as it continues its expansion into destination cities around the world.

About New Evolution Ventures® (NeV):
Based in Northern California, New Evolution Ventures® (NeV) has a two-decade plus record of success in delivering superior returns on investment, specializing in the acquisition, development and operations management of both domestic and international fitness endeavors. Founded in 2008 by Mark Mastrov, Jim Rowley and Mike Feeney and following a strategic partnership with Vision Capital in 2011, the current team of NeV professionals is setting industry-wide standards one brand at a time. Operations have spanned over 20 countries worldwide and included hundreds of facilities. Our team’s industry experience has positioned NeV as a global leader in its field, expanding and reinventing the vision of fitness. For more information, visit www.nev.com.

MADONNA has sent a message of support to gay equality campaigner Rory O’Neill as his impassioned speech about gay rights continues to gather worldwide attention.

Mr O’Neill claimed that the international star sent him an email after watching his oration, which he performed as drag act Panti at the Abbey Theatre in Dublin.

He tweeted: “Yoghurt for breakfast. Wrote some e mails. Message from Madonna about my speech. Walked the dog. WAIT WHAT?”

Broadcasters Dara O’Briain and Stephen Fry have also commended Panti, whose video has been watched hundeds of thousands of times.

Wicklow-born comedian O’Briain told his more than 1.6m Twitter followers: “Ireland is currently ‘enjoying’ a gay marriage debate. By some distance, drag queen Panti has the most eloquent take”.

Closer to home, Irish broadcaster Brendan Courtney and comedian Deirdre O’ Kane have also tweeted their support, while journalist Fintan O’Toole likened the speech to those of former Irish leader Daniel O’Connell, tweeting: “The most eloquent Irish speech since Daniel O’Connell was in his prime”.

Mr O’Neill was invited to give the speech after a controversy which arose when RTE publicly apologised and paid €85,000 in damages to some members of the Iona Institute, and journalists Breda O’Brien and John Waters for comments he made during an interview on ‘The Saturday Night Show’ on January 11, presented by Brendan O’Connor.

In a letter sent to RTE staff, managing director of RTE television Glenn Killane defended its decision to award the damages, stating: “I want to reassure you that RTÉ explored every option available to it, including right of reply. Legal advice was sought and all avenues were explored, including an offer to make a donation to a neutral charity.”

‘ Yoghurt for breakfast.
Wrote some e-mails.
Message from Madonna about my speech.
Walked the dog.
WAIT WHAT??!’

Hard Candy Fitness at the Leipziger Platz in Berlin

The luxury fitness brand Hard Candy Fitness, founded by Madonna along with New Evolution Ventures ( NeV ) and is represented worldwide, will open the third club (over 1300 square meters) with the opening of the LP12 Mall in Berlin.

The first Hard Candy Fitness club opened in November 2010 in Mexico City. Since then the company has expanded worldwide and with the opening with the LP12 Mall of Berlin a brand Pure Women’s Fitness Studio Hard Candy Fitness will open . The term Hard Candy is a reference to Madonna’s studio album from the year 2008 and is the company’s motto ” Harder is Better”.

Hard Candy Fitness Women is a high standard and with the brand’s own exclusive workouts Addicted to Sweat, which were developed on the basis of Madonna ‘s fitness programs, are targeted specifically at women. There will be a broad range of elementary group classes, all according to the standard of Hard Candy Fitness, including courses such as Ripped yoga, Ballast Ball Pilates and Strength in heels.