We were given a photo pass for this evening, so it features professional pictures as well 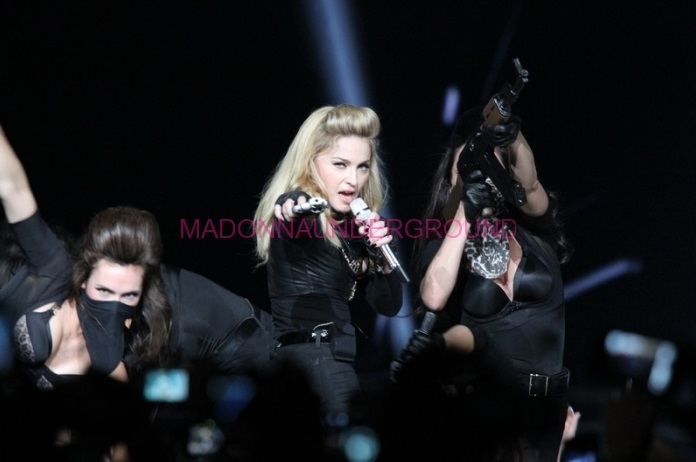 “If We Took a Holiday” – Official Trailer

Ring of fire in the sky……………#livingforlove

Boat i want to be on…………#livingforlove

Diplo: Madonna Asked for ‘Craziest Record I Had’ for New Album 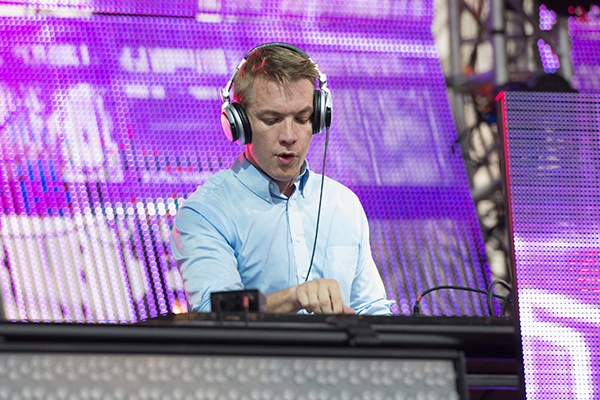 Madonna has been at work in the studio compiling the follow-up to her 2012 effort, MDNA, and one of the album’s producers, Diplo, teased his process with the singer in a new interview with Idolator.

“We’ve written about seven songs now, and hopefully maybe four or five will make it to the album,” the super-producer/DJ said. “I’ve done about three weeks with her, and we’re gonna do some more projects at the end of July. She’s just really cool. I think as far as artists reinventing themselves, she did it before anybody else. She kind of began that trend of actually coming back with a whole new look and style and sound and winning it and hitting the top of the charts. Those records are gonna be crazy-sounding. We really pushed the envelope with some of the stuff we were doing.”

While Diplo noted he typically needs around a week to know if there’s chemistry with an artist, it was there immediately with Madonna. “[S]he was up for anything,” he said. “I love when an artist gives a producer the confidence he needs to work with them, and Madonna was very open-minded to my ideas… she was down from day one.”

Diplo spoke about the creation of one song in particular, which came about on their final night in the studio together: “The last night we were just having fun, and she was like, ‘Yo, give me some of the craziest shit you’ve got right now,’ and we literally wrote a song that night on the craziest record I had. And it worked. All of the best songs happen on a whim.”

Proving his point, Diplo ticked off a few of his hits with similar spontaneous origins, including Alex Clare’s “Too Close,” Usher’s “Climax” — which was made, per Diplo, “in literally like ten minutes” — and M.I.A.’s “Paper Planes,” which came together on a roof in the Caribbean.

Madonna has been intermittently teasing her upcoming record via Instagram. Earlier this week, the singer posted a photo of the sheet music for one track, “Messiah,” as well as a video of an orchestra playing a section of the cut. The singer had previously posted in-studio photos with Avicii and British singer/producer Natalia Kills.

South America is going to get a little touch of Madonna.

The pop singer’s Hard Candy Gyms will be coming to different South American countries in 2015. There is already a Santiago, Chile location, but it’s going to expand to Colombia, Peru, Brazil and Argentina, notes Portafolio.

Madonna is expected in Peru for the opening of gym in Lima, just as she made an appearance when the Rome, Mexico City and Toronto gyms were opened.

Hard Candy Fitness was created in 2010 by Madonna and New Evolution Ventures.

According to the Hardy Candy website, “The brand has grown to include club locations in destination cities around the world that are focused on innovative group fitness programming and personalized fitness training. Our members enjoy an experience where entertainment and fitness intersect leaving them feeling strong and inspired physically and mentally. This inspiration extends well beyond our club walls with other branded lifestyle offerings.”

The gym also touts some of Madonna’s mantra, such as “harder is better” and “no sweat, no candy.”
The concept of hard candy is one that Madonna particularly values, as she also named her eleventh studio album “Hard Candy.” It was released in 2008.

Madonna is now working on new music. The singer took to Instagram to tease her new song, “Messiah.”
She shared a picture of a music sheet, and captioned it: “Coming soon……..#promise #keep#sorceress#deep”
The singer also shared a video of an orchestra playing a bit of the song.
She captioned that video with: “Magic makes the people come together yaaaaaaaasssssssssss. #messiah”

And she was recently inspired to give back to her community.
After a visit to a charter school, she was inspired by the progress she saw, notes Time.
She’s helping to fund a new facility for Detroit’s Downtown Boxing Gym and the Detroit Achievement Academy charter school.

The prodcuer revealed the existence of the track during an interview with Brazilian website Heloisa Tolipan.

Diplo said that he wrote seven songs with the singer, commenting: “I met Madonna because of her kids and then she invited me to a party. We ended up writing seven songs together. I do not usually feel pressured to write hits, but when it’s an artist of this caliber, it’s obvious that I want to push the boundaries a little bit further and surpass myself. One of the songs we wrote is very cool and is called ‘Bitch, I’m Madonna’.”

Disclosure recently confirmed that they are not producing Madonna’s forthcoming new album. Rumours began that the British dance duo were working with the pop star after she posted a picture of her with them at the Governors Ball festival in New York in June.

However, Disclosure have confirmed that this isn’t the case. “She came to our gig at Governors Ball,” Howard Lawrence told Billboard, “and within a few hours, there were articles being written about how we were producing her album – and we had met her that day. How could we even have done that?”

According to the magazine, the duo haven’t ruled out a potential future collaboration with the singer though.

Madonna is currently working on her 13th studio album with Diplo. She has also recorded with Avicii and British pop star Natalia Kills. Madonna’s last album, ‘MDNA’, was released in 2012.

Smiling with my boo! Nothing takes the past away…………like the future! #livingforlove 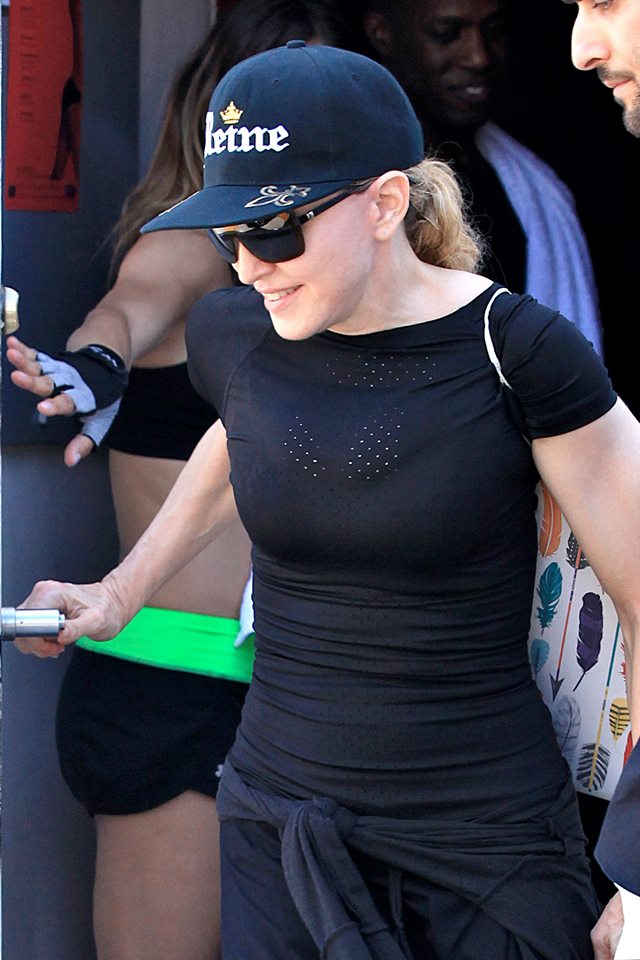 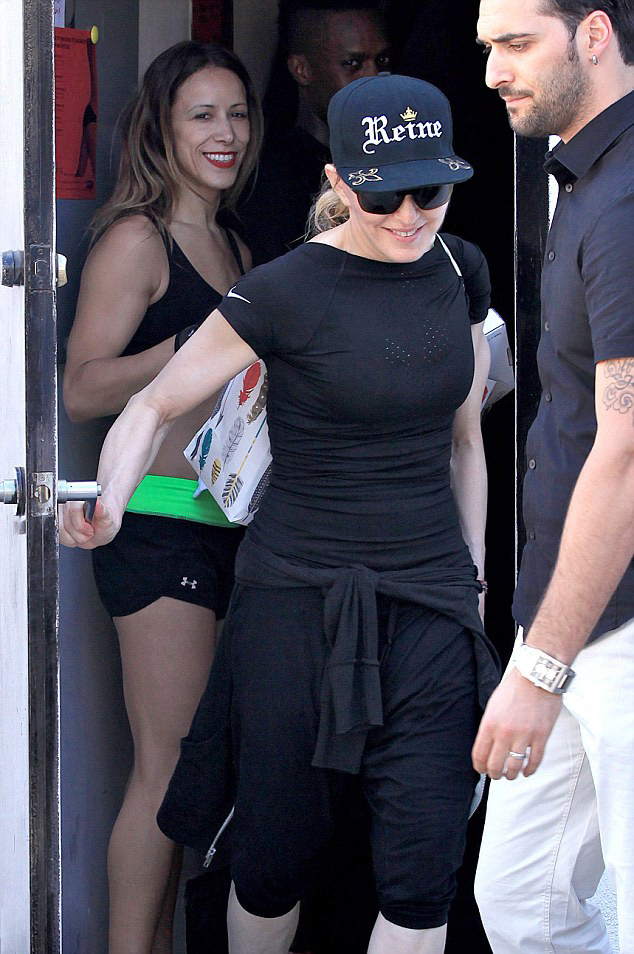 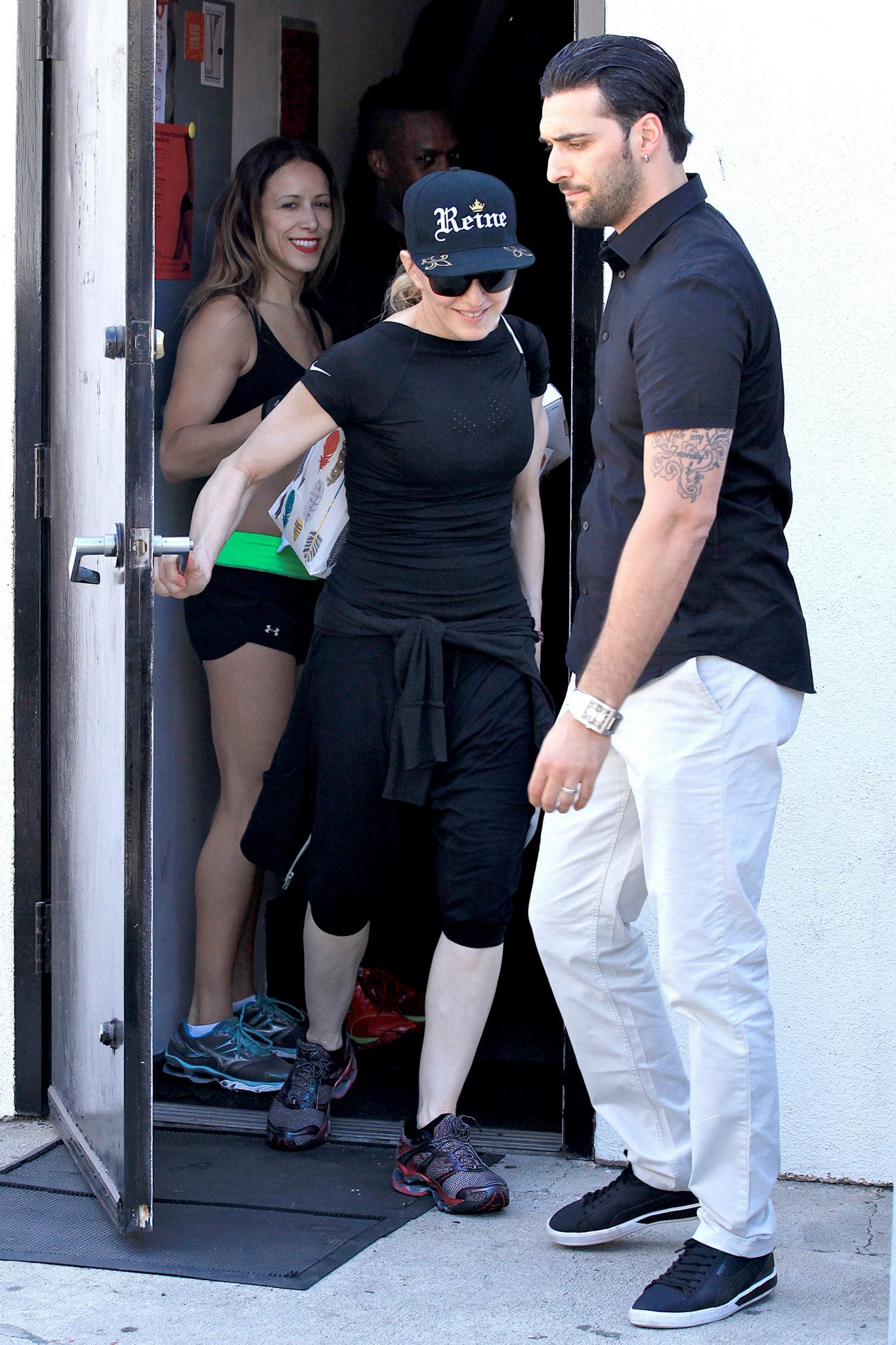 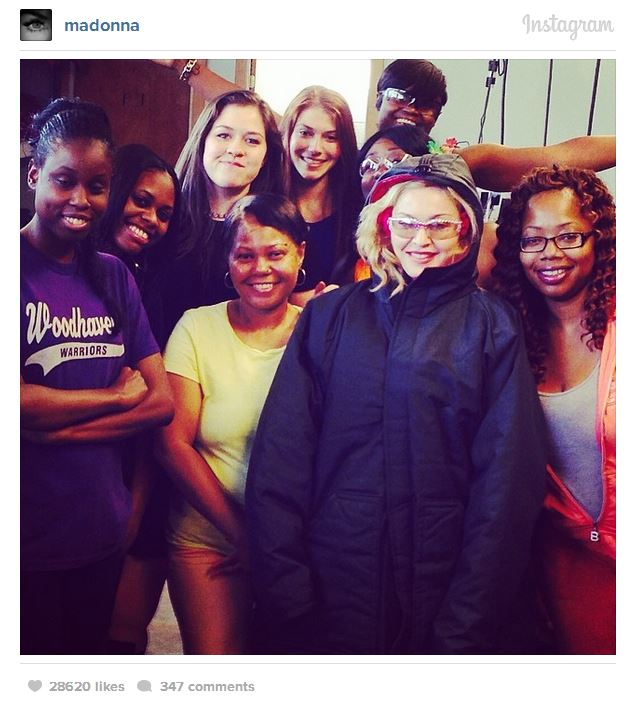 Madonna said she was incredibly inspired by her recent Detroit visit. Today she’s backing it up with her wallet.

In what her spokeswoman calls “the first phase of a long-term commitment” to the city, the Michigan-born pop star is announcing funding for three Detroit community groups.

Benefiting will be the Downtown Youth Boxing Gym, Detroit Achievement Academy and the Empowerment Plan — described in a press release as “three extraordinary organizations that have already begun to bring hope and change to the city.”

They were among the Detroit outfits visited by Madonna during a visit here in early June, when rep Liz Rosenberg said the star was aiming to connect with her hometown.

In a statement to be released today, Madonna says: “I was deeply inspired by the efforts of so many people who I met who have dedicated themselves to helping the kids and adults in Detroit elevate themselves from the cycle of poverty. I have seen the results their commitment and hard work have already accomplished.”

Dollar amounts were not disclosed, but the contributions will entail:

• A “significant donation” toward a new facility for the Downtown Youth Boxing Gym, which serves 65 young people with after-school boxing and mentoring.

• Equipment, art supplies and music gear for the Detroit Achievement Academy, a progressive charter school on the city’s northwest side, including iPods, iPads and Smart Boards for classrooms.

• Funding to train three seamstresses at the Empowerment Plan, which tutors homeless women in job skills while creating coats that serve as sleeping bags for the homeless.

“From meeting the kids at Downtown Youth Boxing Gym who have a 100% high school graduation rate, to seeing how eager the students at the Detroit Achievement Academy are to learn about the arts, to understanding the value of giving homeless women the opportunity to become self-sufficient through The Empowerment Plan, it was obvious to me that I had to get involved and be part of the solution to help Detroit recover,” Madonna says in today’s statement. “A piece of my heart will always be in Detroit and I’m humbled to be able to give back to my community.”

Madonna, who left Michigan for New York in her late teens to pursue an entertainment career, has been a regular visitor in recent months as her daughter, Lourdes Leon, becomes a University of Michigan freshman.

Madonna’s Instagram photos of her Detroit visit
When Madonna visited Detroit in early June, she sent out Instagram photos from stops at the three groups she today announced funding for. From top to bottom: Detroit Achievement Academy, the Empowerment Plan, Downtown Youth Boxing Gym. 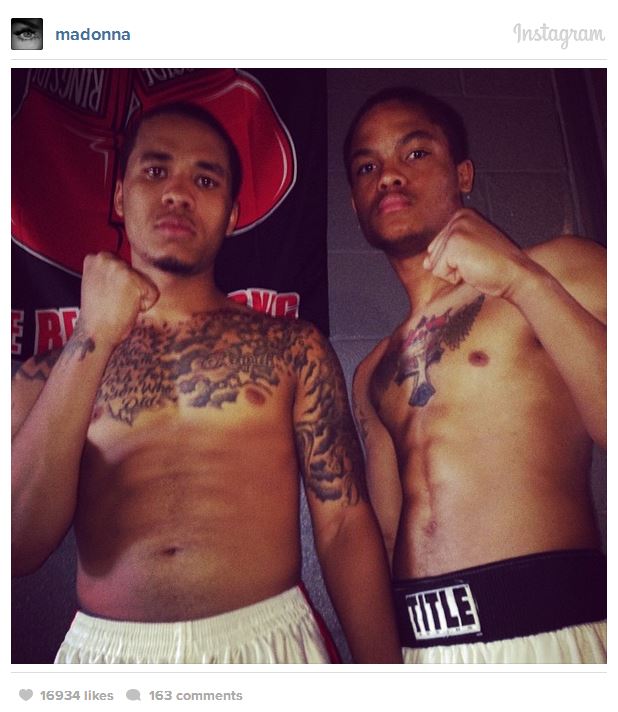 Waiting for this door to open for a very long time! #patience #perseverance #passion 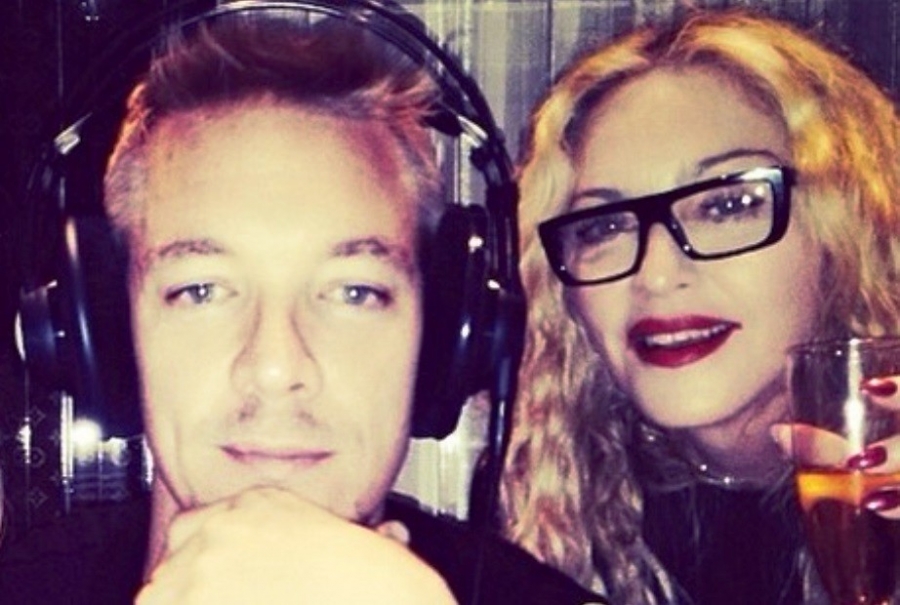 I met Madonna because of her kids and then she invited me to a party.
We ended up writing seven songs together.
I do not usually feel pressured to write hits, but when it’s an artist of this cailber, it’s obvious that I want to push the bounderies a little bit further and surpass myself.
One of the songs we wrote is very cool and is called “Bitch, I’m Madonna”.- Diplo