Chance the Rapper – Thanks so much @Madonna! So grateful for this awesome present! You are a true friend.

Thanks so much @Madonna! So grateful for this awesome present! You are a true friend.

Madonna’s Like A Prayer remains a provocative, substantial pop record

In We’re No. 1, The A.V. Club examines an album that went to No. 1 on the Billboard charts to get to the heart of what it means to be popular in pop music, and how that concept has changed over the years. In this installment, we cover Madonna’s Like A Prayer, which went to No. 1 on April 22, 1989, where it stayed for six weeks.

As 1989 dawned, it seemed like business as usual for Madonna. Her movie career continued to chug along: She was in throwback starlet mode in the forgotten Bloodhounds Of Broadway and gearing up to play the coquettish caricature Breathless Mahoney in Dick Tracy. Meanwhile, her personal life was attention-grabbing tabloid bait. Her tumultuous marriage to Sean Penn finally ended in divorce and she was making Pepsi gunshy about their endorsement deal, because people mistook the edgy “Like A Prayer” video—which featured burning crosses, among other things—for part of its ad campaign. (In reality, the Pepsi clip’s main emotional tug was rather innocuous black-and-white footage of Madonna as a beatific child.)

All of this turmoil overshadowed the fact that as a musician and songwriter, Madonna was looking to deviate from the formula that made her famous. For 1989’s Like A Prayer, that meant a serious musical upgrade from popcorn-flick dance-pop fluff and faux-retro Top 40 cuteness. Working again with Stephen Bray and Patrick Leonard (who had helped her take baby steps toward maturity on 1986’s True Blue, including the trembling ballad “Live To Tell” and the strident hit “Papa Don’t Preach”), Madonna debuted a more sophisticated approach. “In the past, my records tended to be a reflection of current influences,” she told Rolling Stone. “This album is more about past musical influences. The songs ‘Keep It Together’ and ‘Express Yourself,’ for instance, are sort of my tributes to Sly & The Family Stone. ‘Oh Father’ is my tribute to Simon & Garfunkel, whom I loved.” 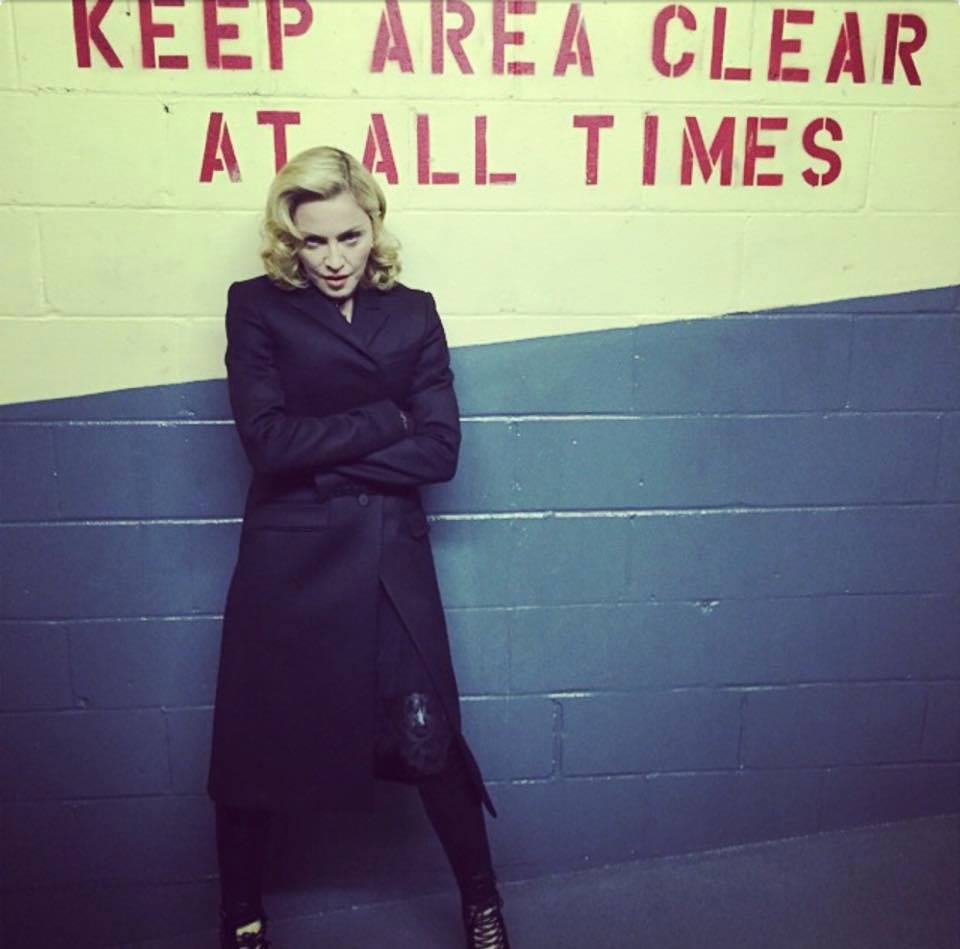 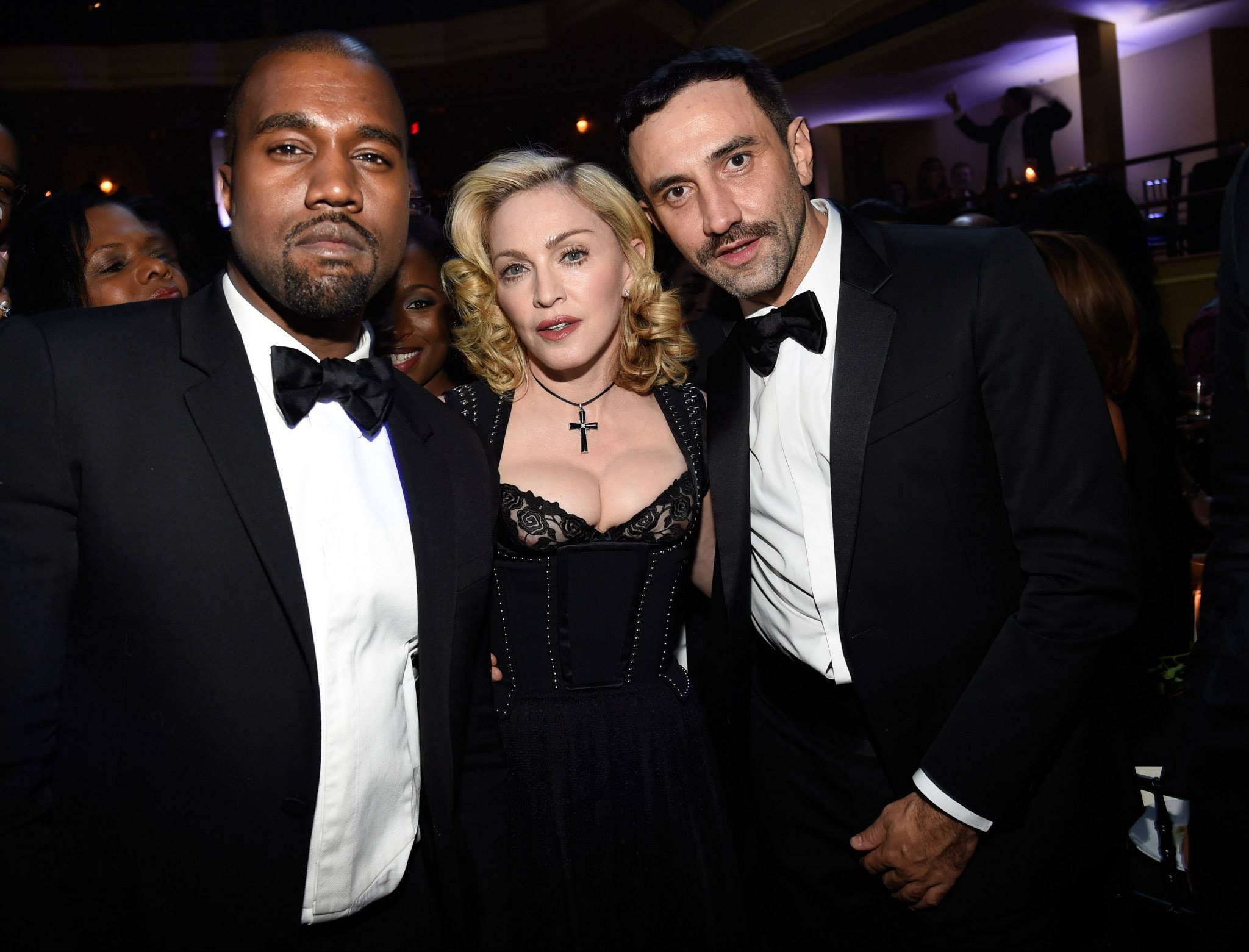 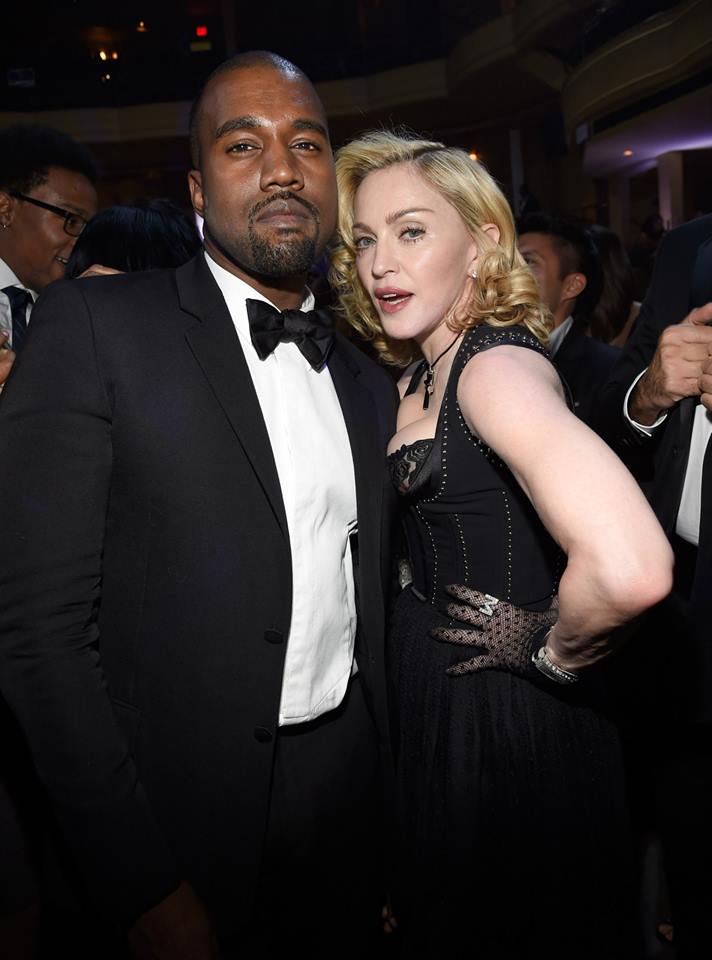 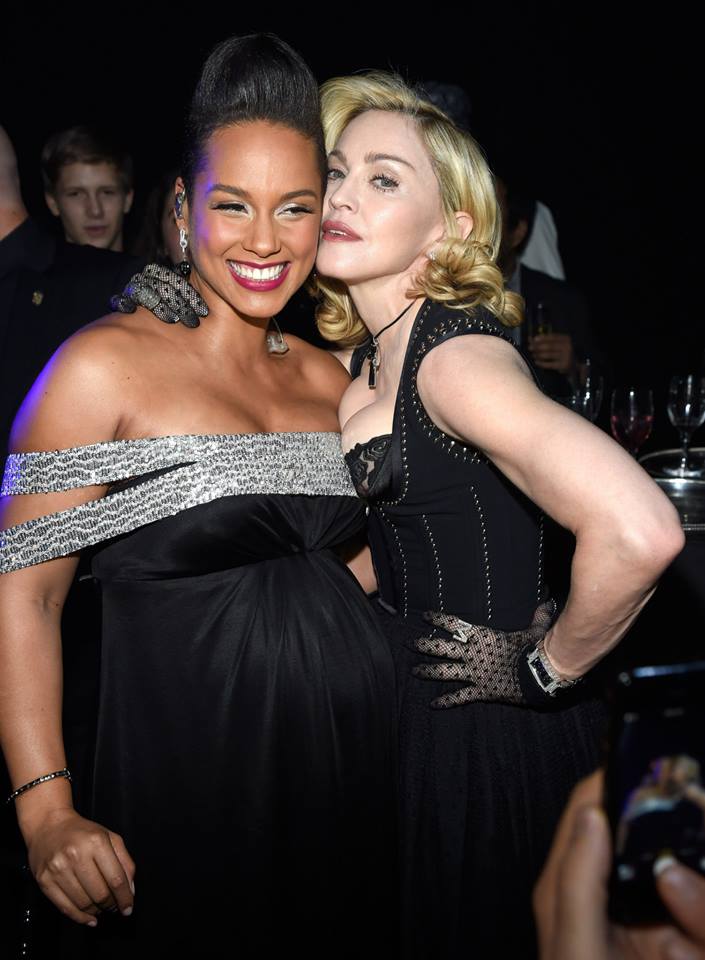 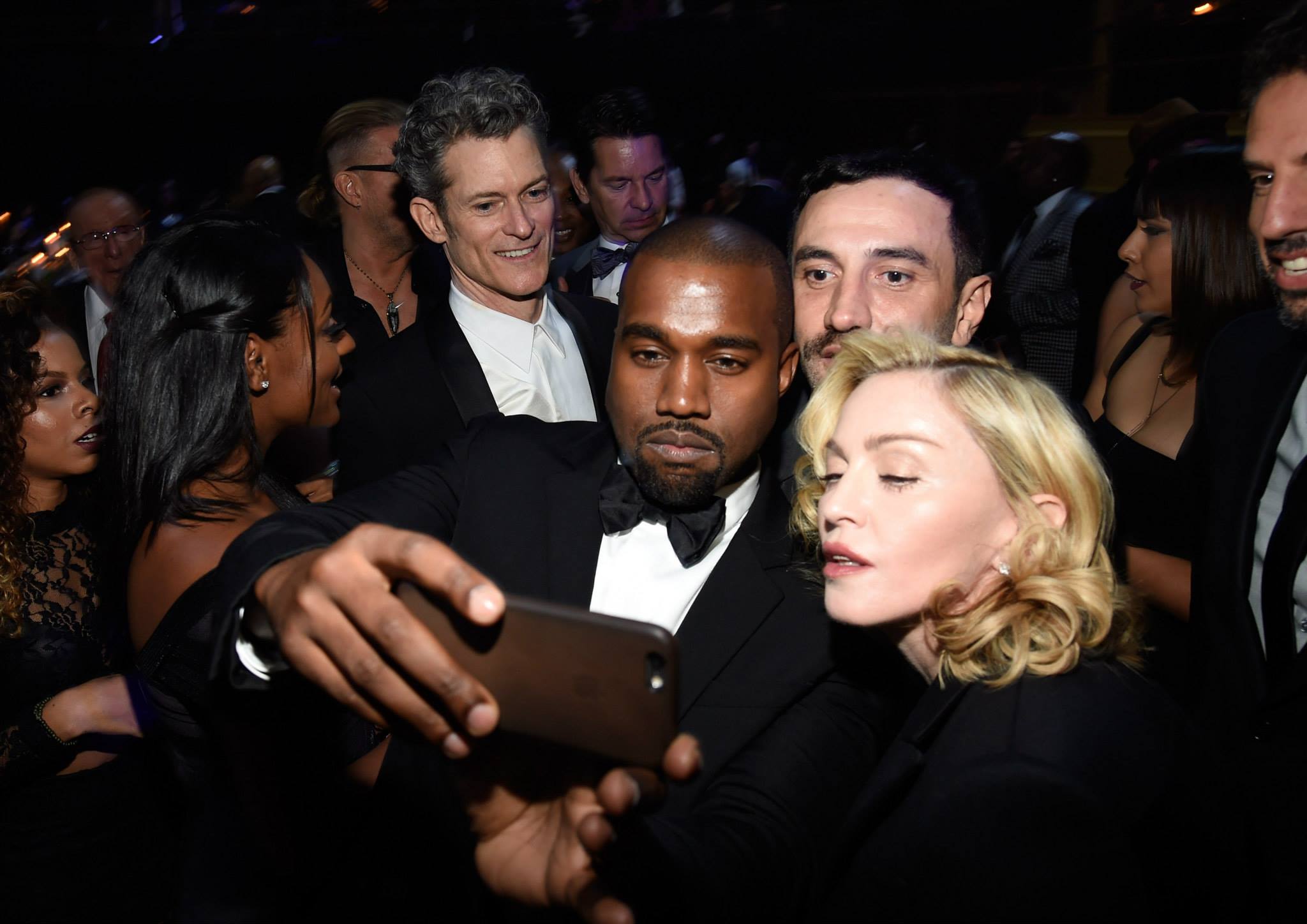 She’s ‘expressing herself’: Madonna, 56, goes back to her punk rock days in black bustier dress at Keep A Child Alive gala 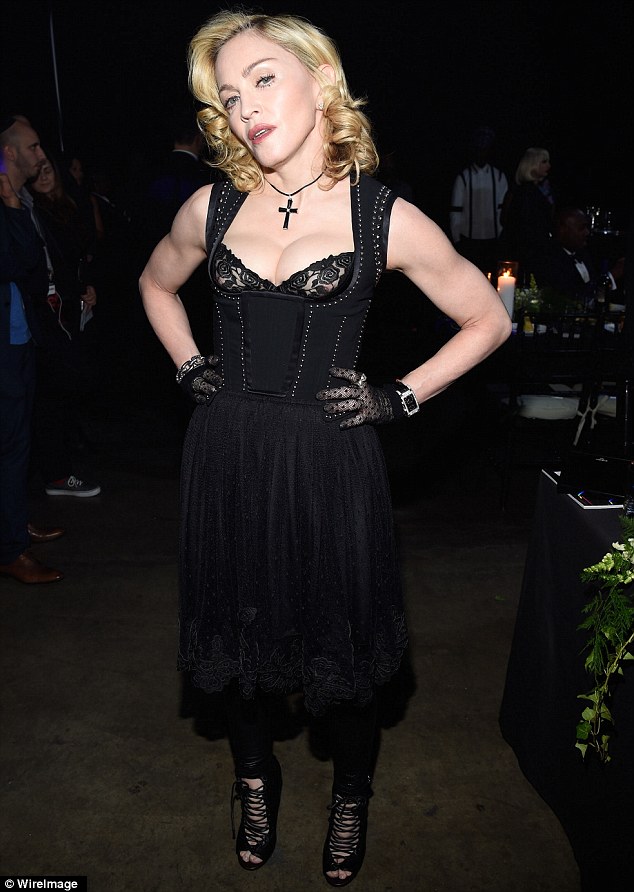 Madonna has carved her own niche as a style chameleon, and on Thursday she resorted to a look that started it all.

The 56-year-old Material Girl was draped in a dress that screamed 1980s as she hit up Keep A Child Alive’s 9th annual Black Ball in New York City on Thursday.

Madonna’s frock featured a tight-fitting bustier with sheer lace details showing off her overflowing cleavage, along with a lace skirt that fluttered to her shins. 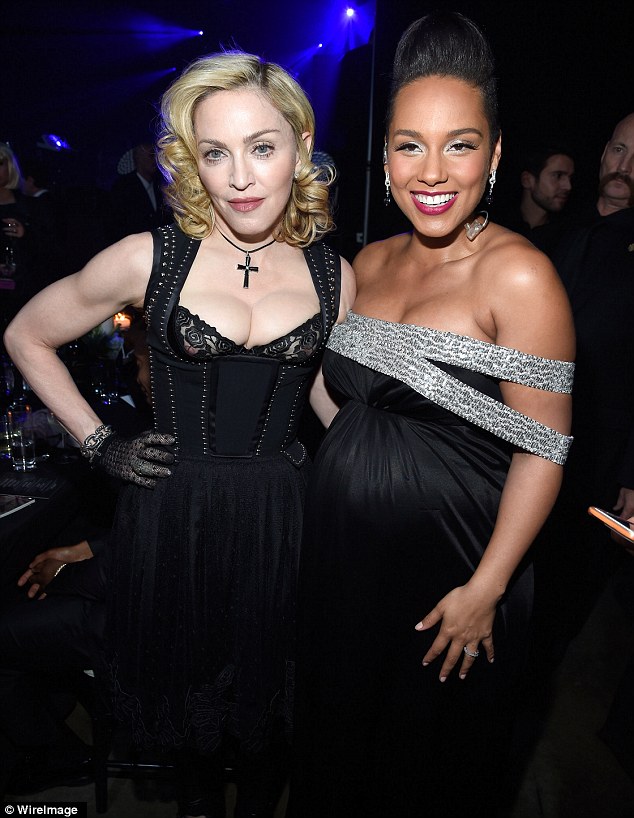 Even her accessories were a clear nod to her Desperately Seeking Susan character in the 1985 cult flick who clothes herself in various designs picked up at second hand stores.

Black leather lace-up booties by Givenchy and black lace mitts were a dressy touch, and a heavy crucifix pendant adorned her throat. 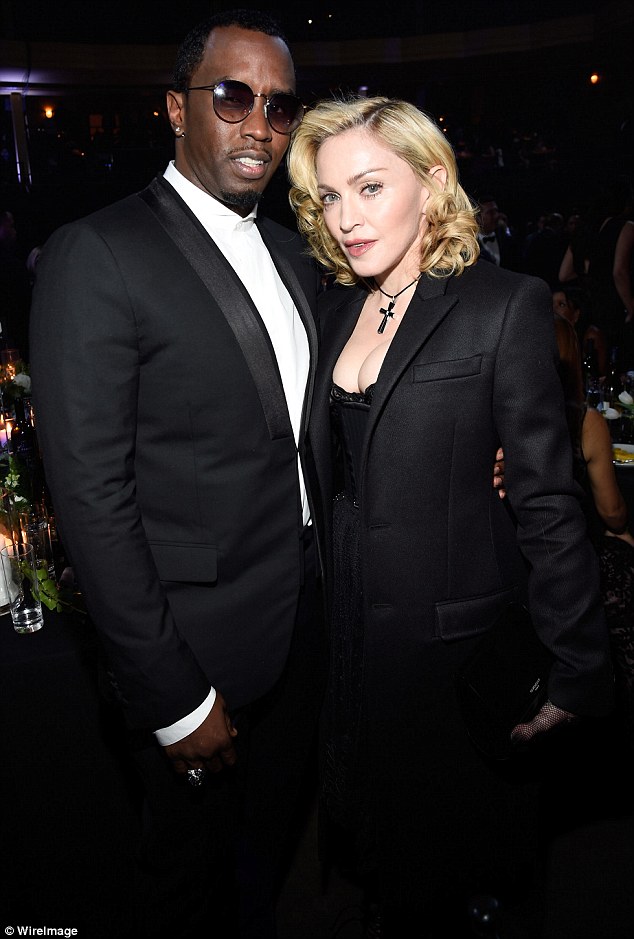 Madonna’s ‘Angel’ Gets A Punk Makeover, Courtesy Of Brooklyn’s The Dead Betties (VIDEO)

The Brooklyn-based punk rockers who recently tackled Britney Spears’ “Lucky” now have their sights set on the Material Girl.

The band, which has headlined shows at SXSW and Toronto Pride, say the song — which first appeared on Madonna’s 1984 “Like a Virgin” album — has long been a personal favorite.

The band is composed of lead singer–bassist Joshua Ackley, drummer Derek Pippin and guitarist Eric Shepherd. They’re currently putting the final touches on a forthcoming album, which will feature the single, “The Way We Live Now.”

Ahead of MTV’s first Music Video Awards, broadcast Sept. 14, 1984, the network was having difficulty booking top talent. Co-hosts Dan Aykroyd and Bette Midler were in their 30s, old for the MTV crowd, and ZZ Top had refused to play — until the network pulled the band’s videos and manager Bill Ham relented.

MTV did, however, secure a largely unknown singer whom MTV’s Chip Rachlin recalls “was a bit difficult.” Madonna wanted to sing a new song, “Like a Virgin,” to a full-grown, white Bengal tiger. The big cat was nixed. Instead, she decided to emerge from a 17-foot tall wedding cake and sing the song in a white wedding dress, a bustier and a BOY TOY belt buckle — a classic Madonna mixed message. But as she descended, one of her white stilettos slipped off. “So I thought, ‘Well, I’ll just pretend I meant to do this,’ and I dove on the floor and I rolled around,” she later said. “And, as I reached for the shoe, the dress went up. And the underpants were showing.”

Despite the rise of tabloid journalism, Meldrum’s duty of care to so many stars who have inevitably become his friends hasn’t waned. Even the interviews that didn’t pan out as expected, as with a rising Madonna.

“I was in the office in New York and I was given this huge lecture [for being late],” Meldrum said of their first meeting.

“We were great friends straight away.”

Taken from an article by Canberra Times

BOOK EXCERPT: John-John had affair with Madonna, much to his mother’s disapproval — EXCLUSIVE

..’One unwelcome reminder of JFK’s torrid affair with Marilyn — the affair that most troubled Jackie — arrived on her doorstep in the form of another blond bombshell by the name of Madonna. Already a pop icon, Madonna was best known at the time for her “Material Girl” video, an homage to Monroe’s “Diamonds Are a Girl’s Best Friend” number from the film Gentlemen Prefer Blondes.

The Material Girl and JFK Jr. met briefly at a party following one of her concerts at Madison Square Garden in 1985. Three years later, after the breakup of her stormy marriage to Sean Penn, she went after John. Beyond the obvious — stories of her sexual escapades abounded — Madonna was convinced that destiny was taking a hand in bringing together the undisputed heiress to Monroe’s platinum persona with the son of JFK. She told friends she believed that her affair with JFK Jr. would be nothing less than “cosmic.”

Taken from an article by, and to read more click NY Daily News

Why Madonna’s unapologetic ‘Bedtime Stories’ is her most important album 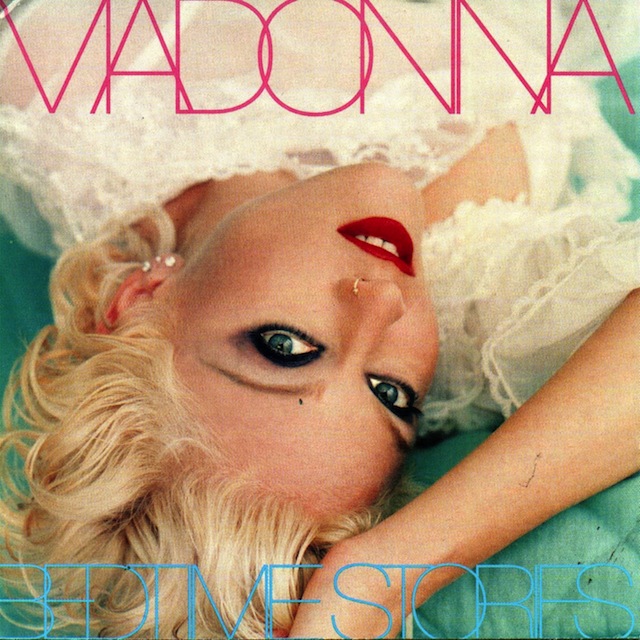 For as long as Madonna has made music, she has endured relentless criticism for her sexuality. She’s been perhaps the most consistent target in the music industry, drawing critiques for more than three decades, and reviews of her work have served as a roadmap for how we scrutinize women at each stage in their music career. Whether it was public speculation on why she isn’t “like a virgin” or it was chastising her middle-aged body in a leotard, the shaming has had many iterations despite its one unwavering resolution: She goes too far.

That’s why her album Bedtime Stories, even as it celebrates its 20th anniversary, is still her most important work. For months leading up to its release, it was marketed as an apology for her sexual behavior, and critics hoped it would be her return to innocence. Instead, she offered a lyrical #sorrynotsorry and a response to the problem of female musicians being scrutinized for their sexuality rather than their music. As a result of the public’s moral concerns, it has become Madonna’s most quietly important album, setting the tone for how artists deal with critiques of their sex life.