Madonna – Get Into The Groove [LWKY Remix]

In honor of the upcoming 30th Anniversary of Desperately Seeking Susan, Chicago-based electronic music duo LWKY have dropped a remix of the Madonna classic “Get Into the Groove.”

Her material girls were on display, and Ellen talked to the audience about it…

Her Madgesty is the face of Versace—again!

Just days after the release of her jaw-dropping Interview magazine sit-down and photo spread, Madonna is at again, topping off her best week ever with an exciting announcement: She is returning as the face of the House of Versace—for the fourth time!

The original envelope-pushing pop queen, 56, posed in the Italian brand’s sexy clothing, including a crop top embellished with a lightening bolt design, a laser-cut dress, and a Versace watch.

As explained by the house, the portraits, photographed by Mert Alas and Marcus Piggott in NYC, were shot to focus on Madonna’s iconic girl-boss image as a pop star, businesswoman, humanitarian, entertainer, documentarian, and director.

Credit: Mert Alas & Marcus Piggott
“It’s always exciting to be dressed head to toe in Versace and experience first hand [Donatella Versace’s] vivid imagination and passion that she has created for this collection,” the mom of four shared in a statement.

And clearly, for Donatella, 59, the feeling is mutual. “Madonna is one of the true icons of Versace,” the designer said. “I am thrilled to have my friend and the most powerful and directional artist as the face of Versace for Spring 2015.”

The first time Madonna posed for the brand—also adored by Angelina Jolie, Jennifer Lopez, and Blake Lively—was in 1995, making this a partnership that has spanned almost two decades.

Madonna & Versace Get Together Again

Versace just announced that Madonna will be the face of their Spring/Summer 2015 campaign!

The campaign, which was photographed in New York City by Mert & Marcus captures the unapologetic power of Madonna wearing pieces from the new Versace collection.

“It’s always exciting to be dressed head to toe in Versace and experience first-hand Donatella’s vivid imagination and passion that she has created for this collection,” commented Madonna.

“Madonna is one of the true icons of Versace. I am thrilled to have my friend and the most powerful and directional artist as the face of Versace for Spring 2015,” said Donatella Versace.

It is the fourth time that Madonna has appeared in Versace’s advertising campaigns. 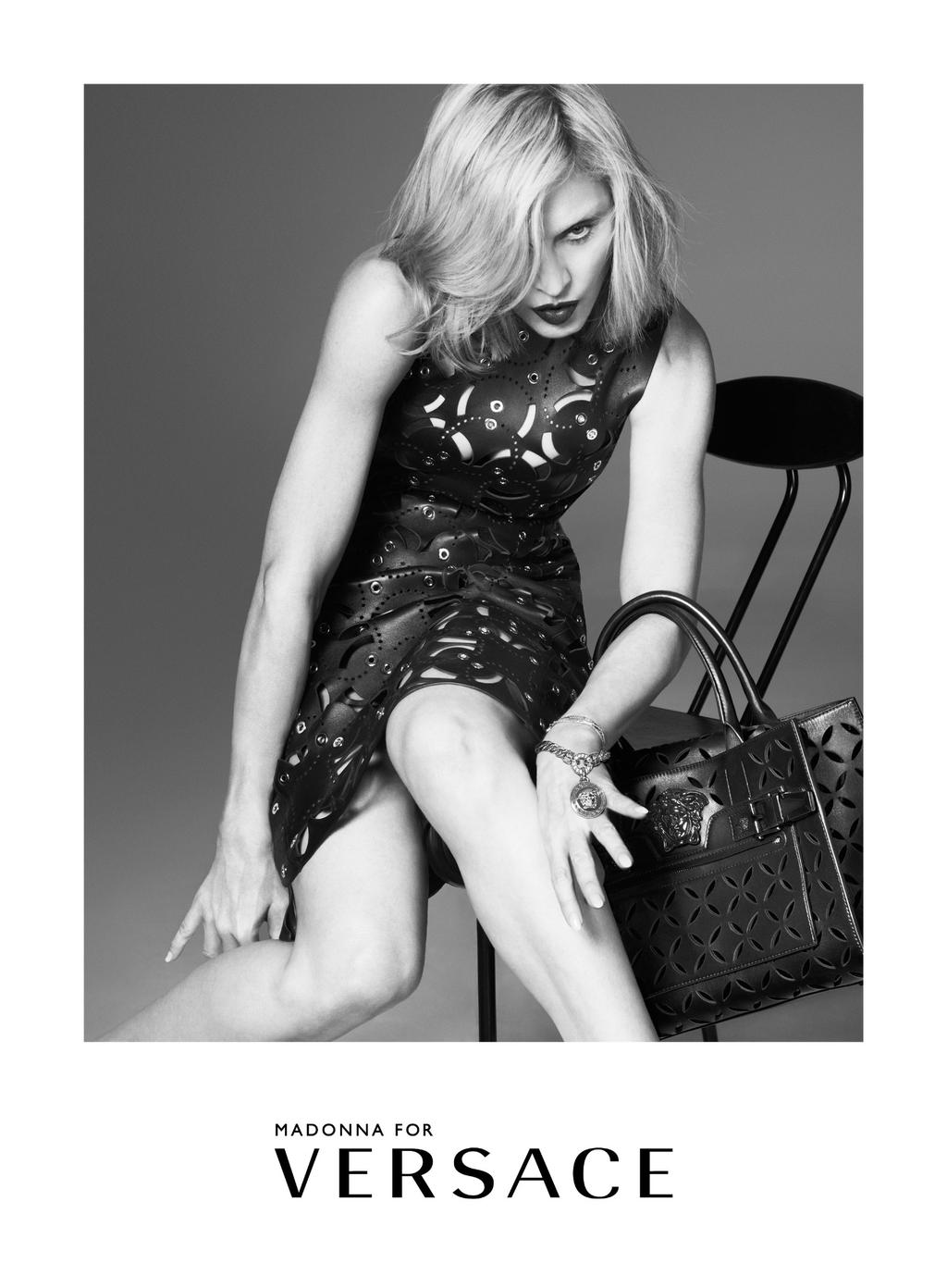 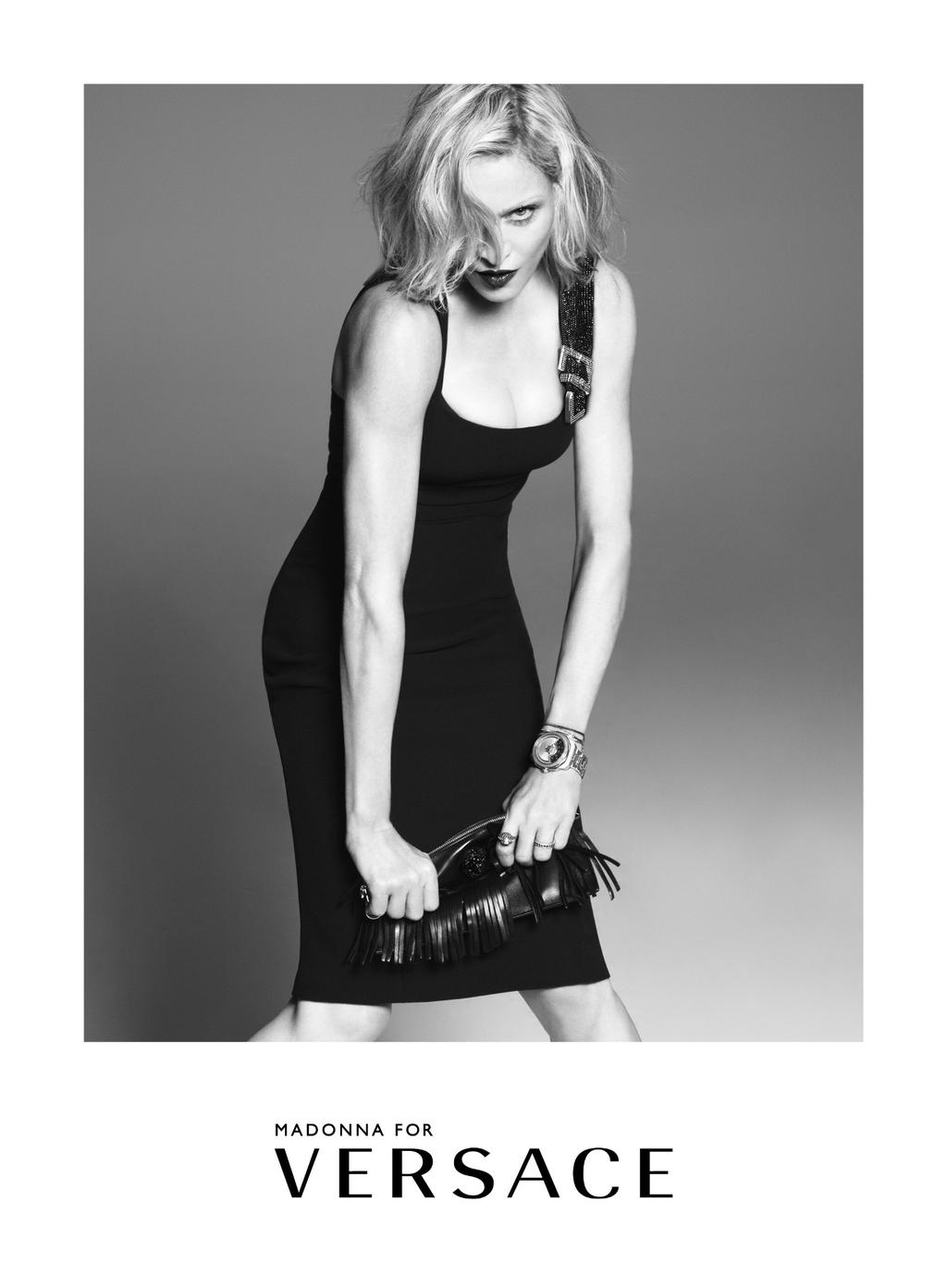 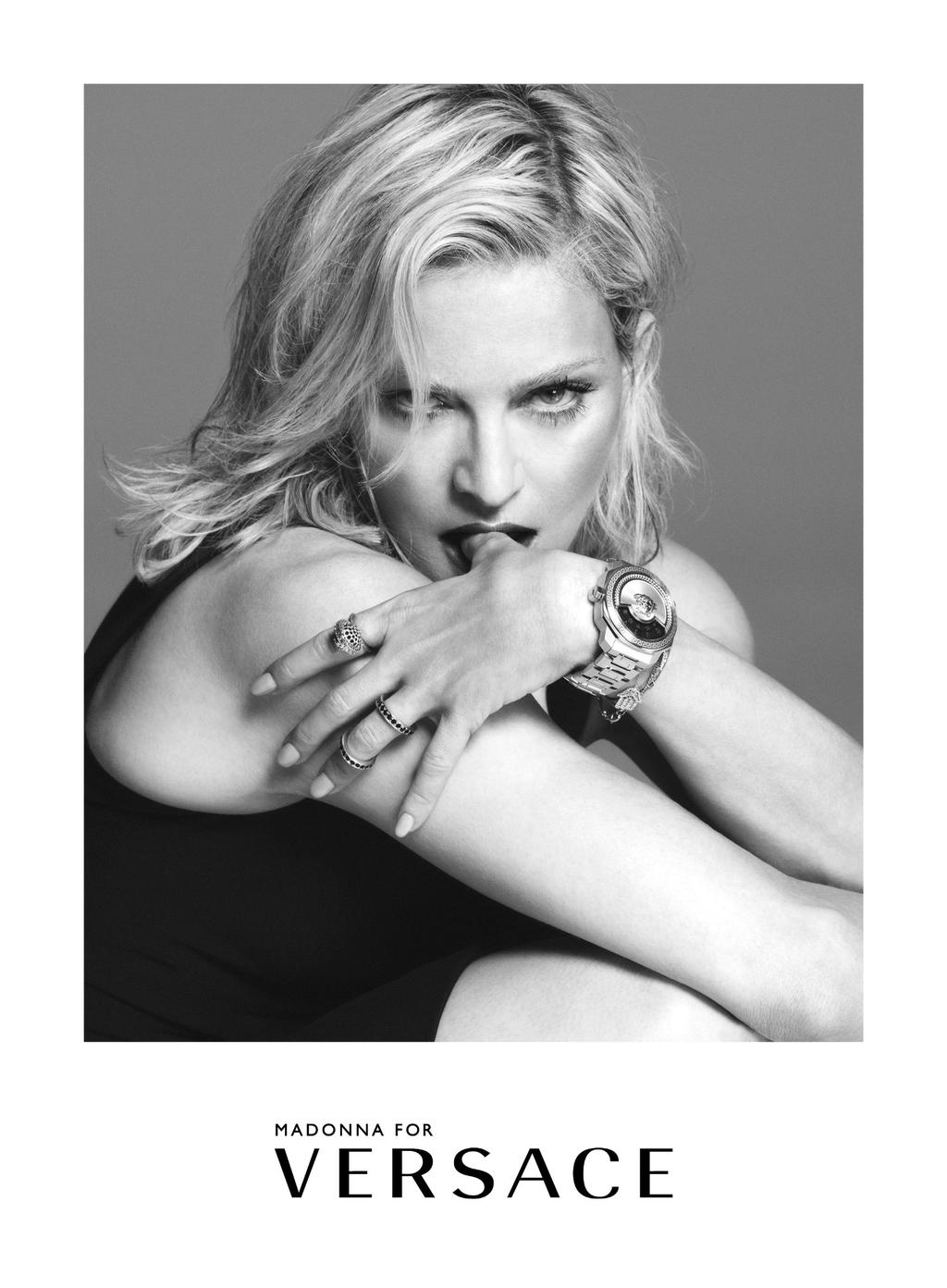 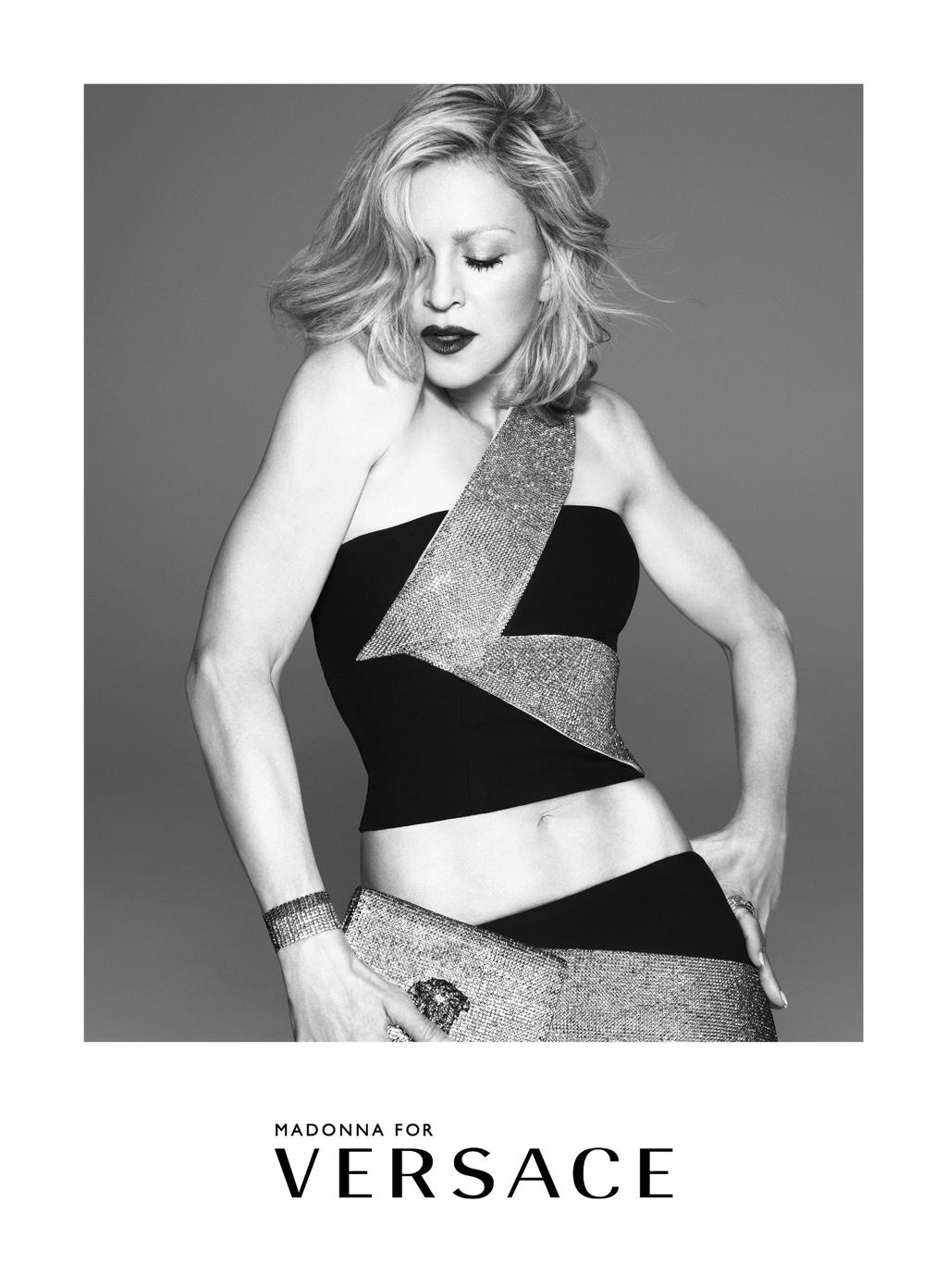 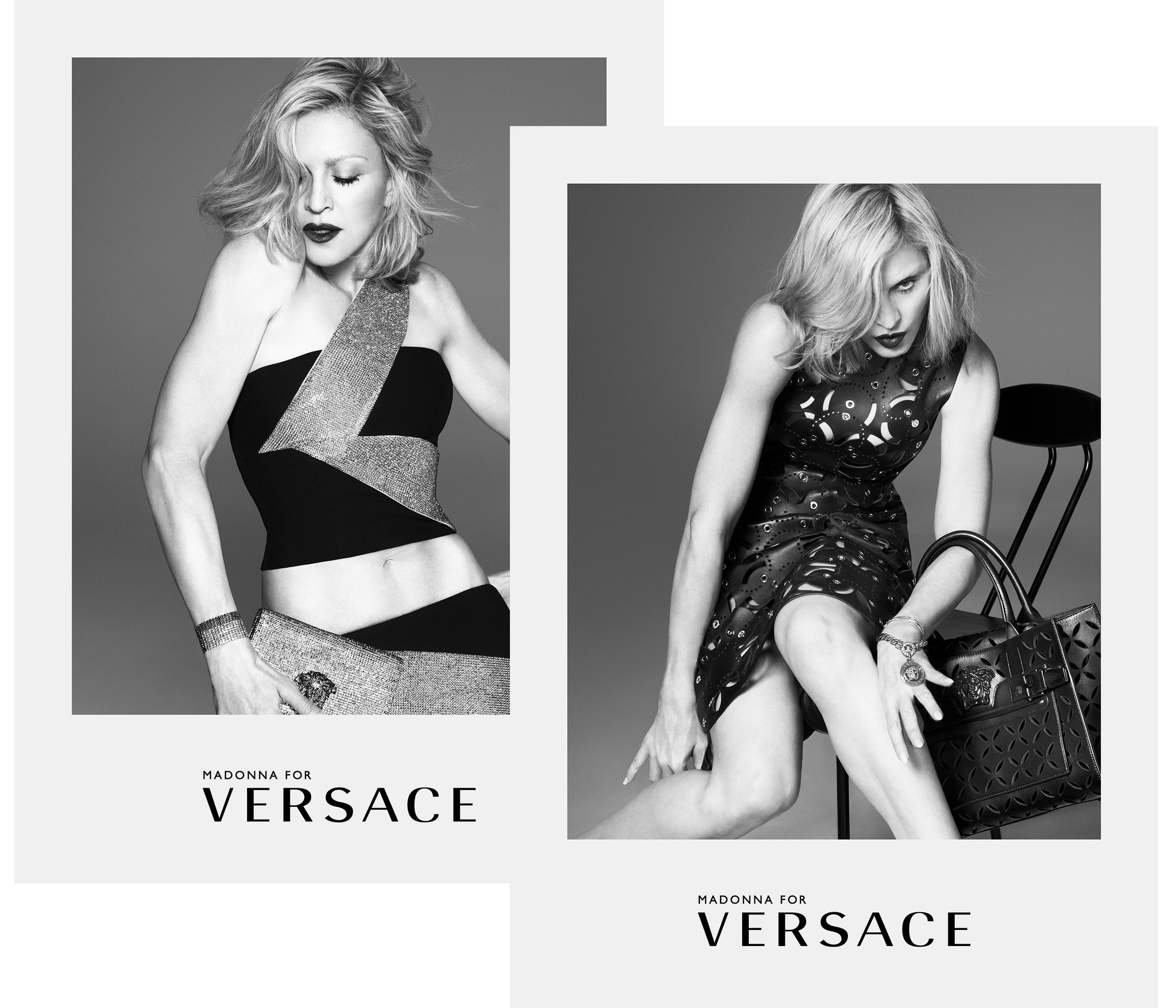 Perched on the edge of her chair, fixing the camera with a smoldering gaze, she looks feral, poised for the kill.

She is Madonna, enshrined in a new advertising campaign showcasingDonatella Versace’s spring/summer 2015 collection. Lean and faintly menacing, she appears, at least in the lens of the fashion photographers Mert Alas and Marcus Piggott, the image of candid aggression.

She is that and more, said Ms. Versace, whose latest print collaboration with the star (a 12-page portfolio set to break next spring in magazines including Vanity Fair and the American, French and Italian editions of Vogue) is but the latest expression of a running theme.

“Madonna says it best herself: She is unapologetic,” Ms. Versace said the other day. “She is her own woman, a role model who shows other women how we can do what we want, and get what we want, and do so for all of our lives, with no compromise.” 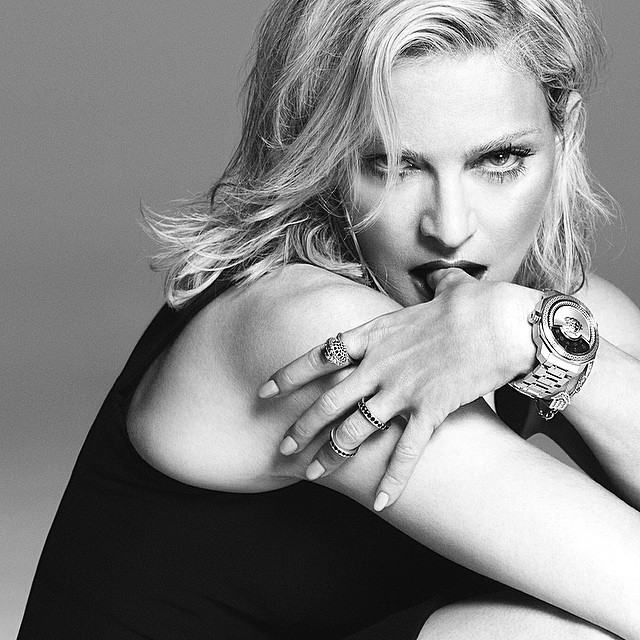 In the new ads, Madonna appears to have obligingly followed the path of past Versace mannequins, among them Amber Valletta, Christina Aguilera and, perhaps most vividly, Lady Gaga, each with a taut frame and a curtain of center-parted silver blond hair — an evident homage to the slight but sinewy, willfully showy Ms. Versace.

Few played the part as persuasively as Lady Gaga. Bandaged in lavender chiffon, and wearing a lacquered perma-tan, she posed this year for the Versace spring/summer 2014 campaign as an idealized Donatella, a way perhaps of returning the designer’s fanlike admiration.

Ms. Versace, after all, had dressed the singer for the “Edge of Glory” video and her “Born This Way” tour. And last year, Lady Gaga returned the compliment with “Donatella,” a single on her “Artpop” album, in which she croons: “She’s so thin. She’s so rich and so blond. She’s so fab, it’s beyond … .”

She could as easily have been describing Madonna, on whom she has arguably modeled her career. Yet Madonna’s latest star turn (which also includes an appearance on the cover of the current issue of Interview) raises questions of her own relevance to a generation of luxury shoppers perhaps more attuned to the likes of Lady Gaga, Rihanna or, for that matter, Taylor Swift.

Yet in some views, Madonna is as timely as ever. “Once you hit that icon status, it’s not a matter of relevance,” said Lisa Mirchin, an advertising consultant. “Is Marilyn Monroe or Audrey Hepburn relevant? I think so.”

Ms. Mirchin, the founder of GlamBrand, an agency specializing in fashion and beauty, said: “Madonna is ageless, and so is most fashion. Women are dressing as one age now. The range can go from 20 to whatever nature and physics will allow.” 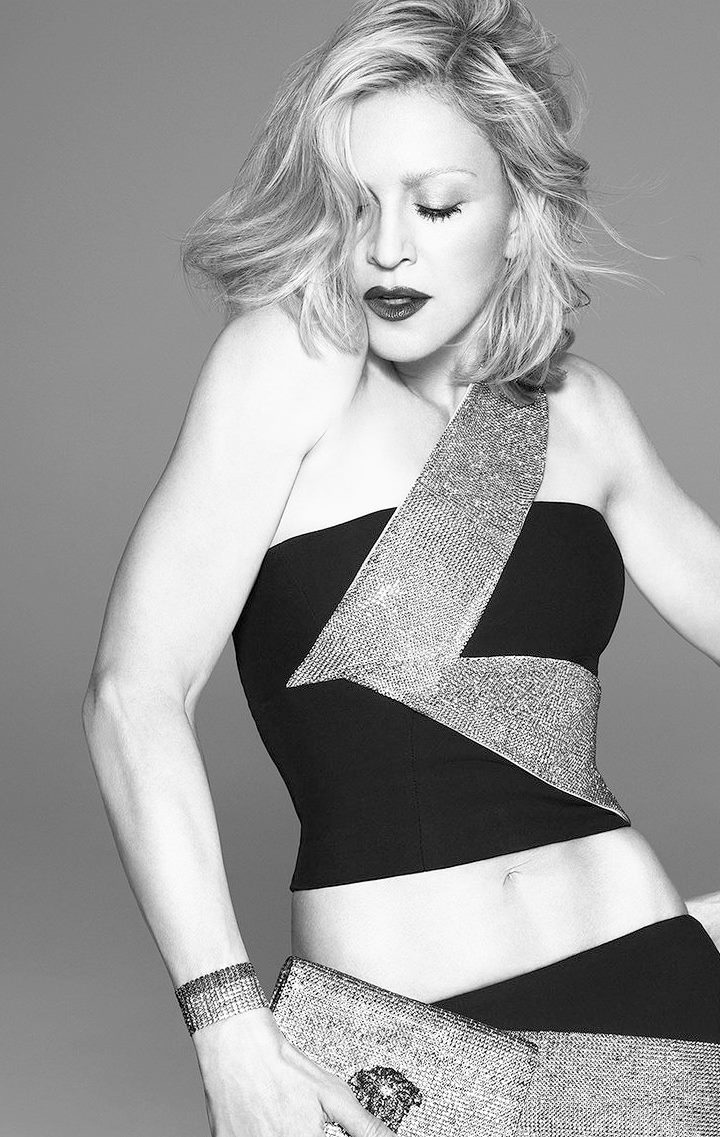 More than ageless, fashion remains, for all its lip service to innovation, a resolutely conservative industry. Paraphrasing a theory advanced by Tina Brown during her tenure as the editor of Vanity Fair, Vanessa Friedman, the fashion director of The New York Times, wrote in a column in August that the moment to feature a celebrity subject is “just after peak: just after that person became famous enough to be immediately recognizable by the general audience.”

The reality, Ms. Friedman wrote, is that “fashion likes to do what it knows works, which is to say: sells. Or at least what has been proven to work before.”

Having shared a history with the designer, Madonna fills the bill. Ms. Versace first cast the star in a 1995 campaign, Steven Meisel capturing Her Ladyship in a black-and-white photograph that shows her dining face-to-maw with a large dog.

A decade later, Mario Testino portrayed the pop idol in a 1960s Palm Springs-like setting, tricked out in what a well-meaning socialite might take for business attire. Wearing a giddily patterned shirt and immaculately tailored skirt, she distractedly set about typing and sorting her mail.

And now, the mutable performer, who has incorporated fashion, and often Versace, into a canny performance art, appears as a sexual predator, dressed in a formfitting black leather dress and matching laser-cut Palazzo bag. “It is Versace,” the designer said, “but with a fresh and powerful new air and attitude.”

“When Madonna asked me on set, ‘Which character do you want me to play?’ ” Ms. Versace recalled, “I answered, ‘I want you to be Madonna and yourself.’ And she laughed at me.”

Madonna: ‘I don’t see anything pornographic about beautiful pictures of naked women’

Her Interview cover shoot caused a media meltdown earlier this week, but Madonna’s candid approach to sexuality stretches back decades. To remind us all of her penchant for provocation, here’s part one of a piece from September 1992 around the release of her book Sex, an interview originally published in NME and lifted from Rock’s Backpages 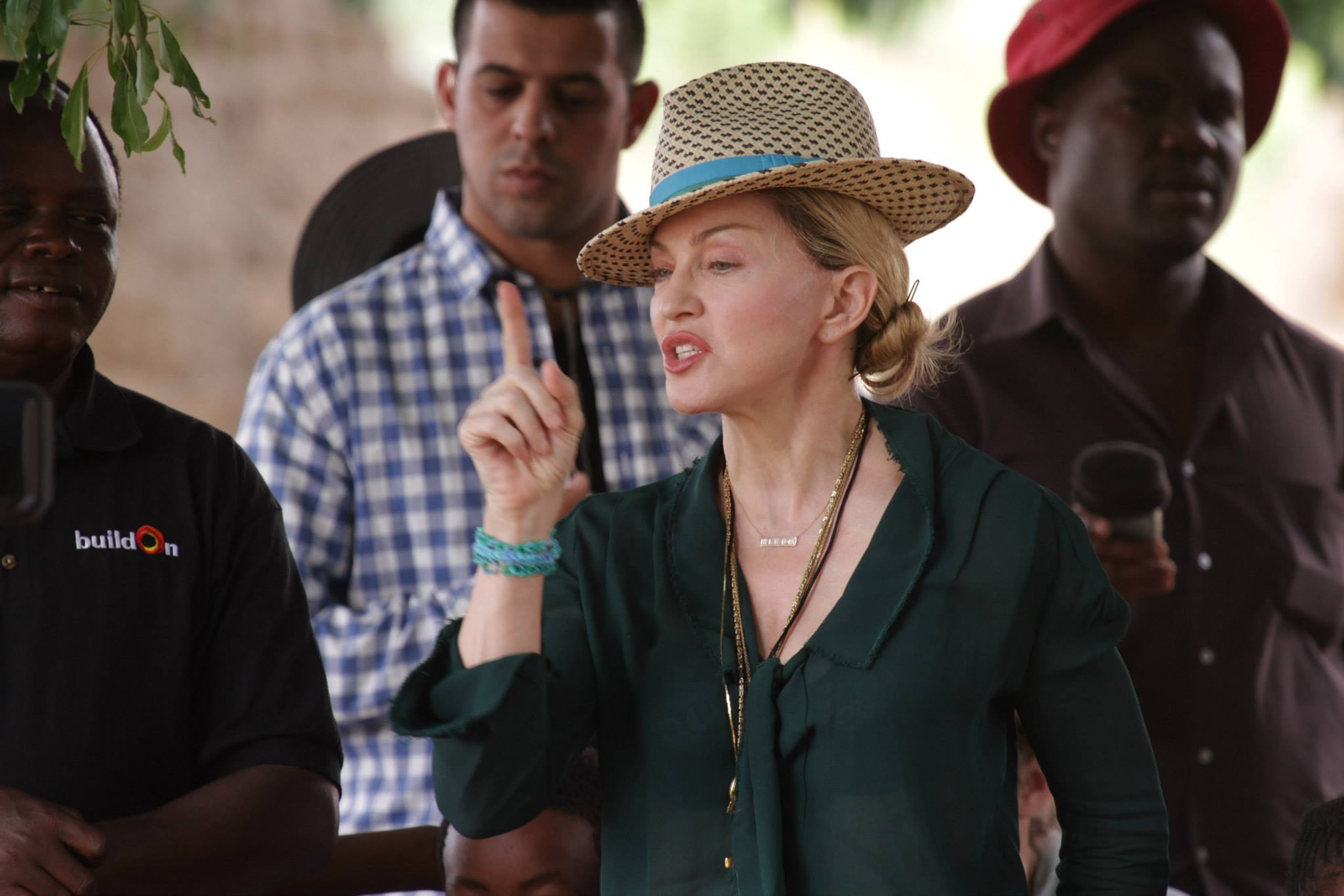 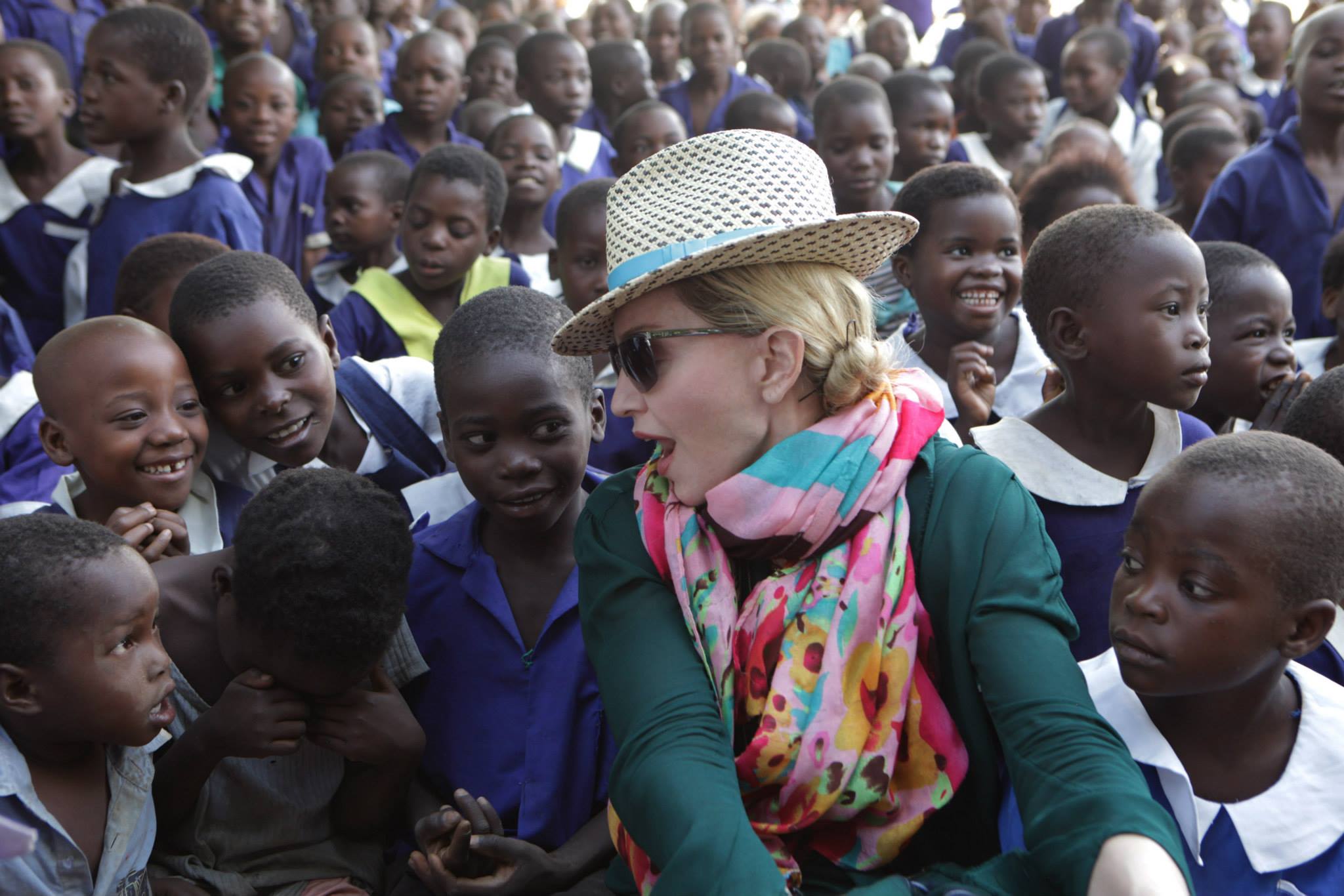 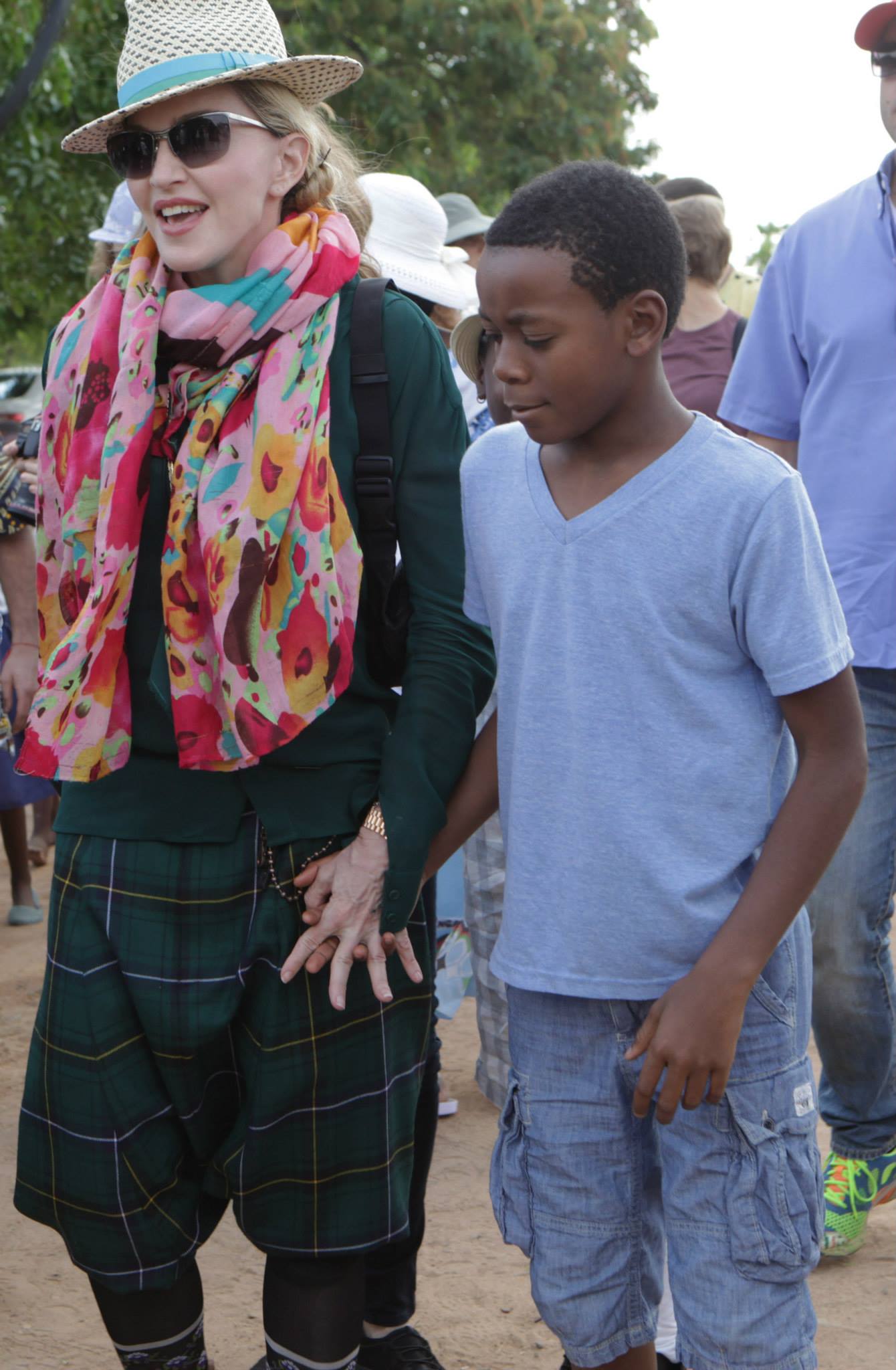 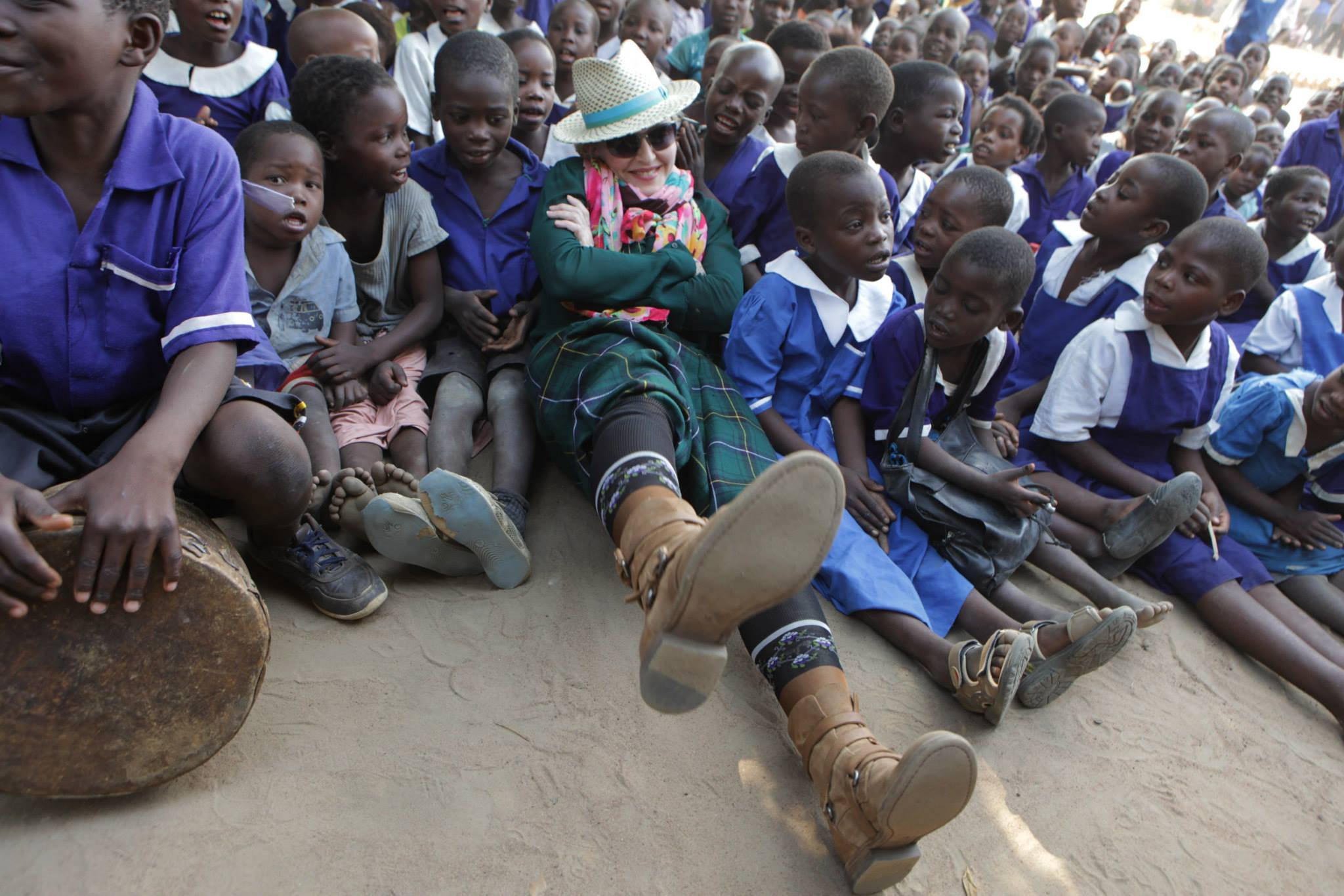 Madonna visits Mkoko, the school she built in Malawi

Madonna visit with children of Mkoko School, the institution she built in Malawi. The singer was accompanied by her children when she vowed to continue to help children of the region. 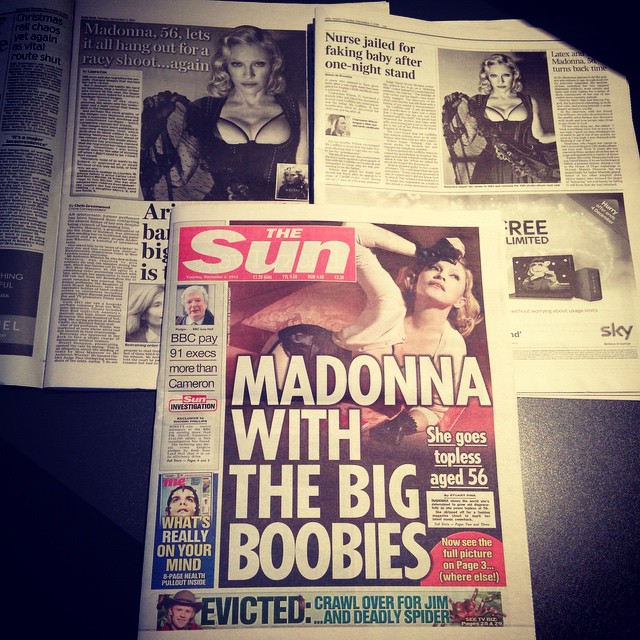 Madonna Lets It All Hang Out In New Photo Shoot

Ever-provocative Madonna is letting it all hang out for a new Interview magazine photo spread, revealing her breasts in one saucy shot.
The singer appears on the cover of the new December/January issue of the publication and posed for a series of sexy shots inside, lounging on beds and sofas.
In an accompanying interview, the Papa Don’t Preach singer admits she has tried every drug once, adding, “As soon as I was high, I spent my time drinking tons of water to get it out of my system. As soon as I was high, I was obsessed with flushing it out of me. I was like, ‘Ok, I’m done now’.”
She also opens up about death, revealing she “became very obsessed with dying and the idea that you never know when death will arrive”, adding, “So one has to do as much as possible all the time to get the most out of life.”

The pop phenomenon born Madonna Louise Ciccone in Michigan in 1958 has, over the course of her career as a singer, songwriter, actress, filmmaker, and pure entertainer, become the living paradigm for the character-based, image-centric presentation of an artist. And her evolutionary mutability—the quicksilver ability to grow and change and live spectacular multiple lives in and beyond the public eye—has given each viewer and each listener their own favorite Madonna. From her early years in rough-and- tumble New York City of the 1980s to her Sex (book) goddess 1990s and the equestrian splendor of the early aughts in England, each chapter of her life is related as a kind of Dickensian parable of perseverance, of will, or of self-invention, as she weaves herself together out of blond ambition, yoga, or prayer. 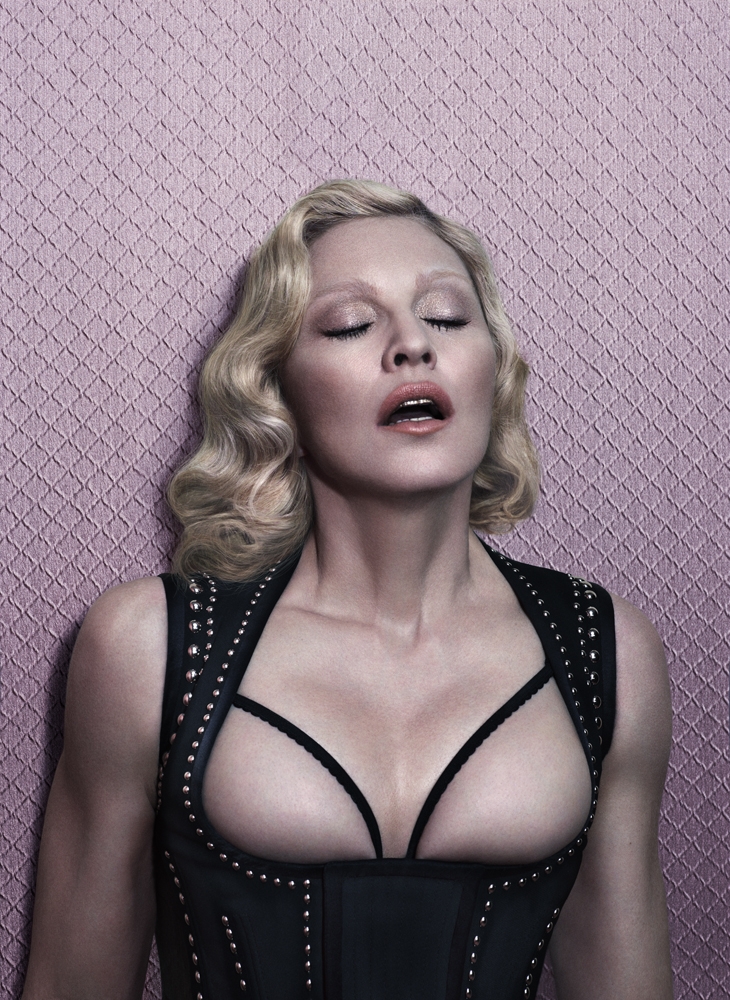 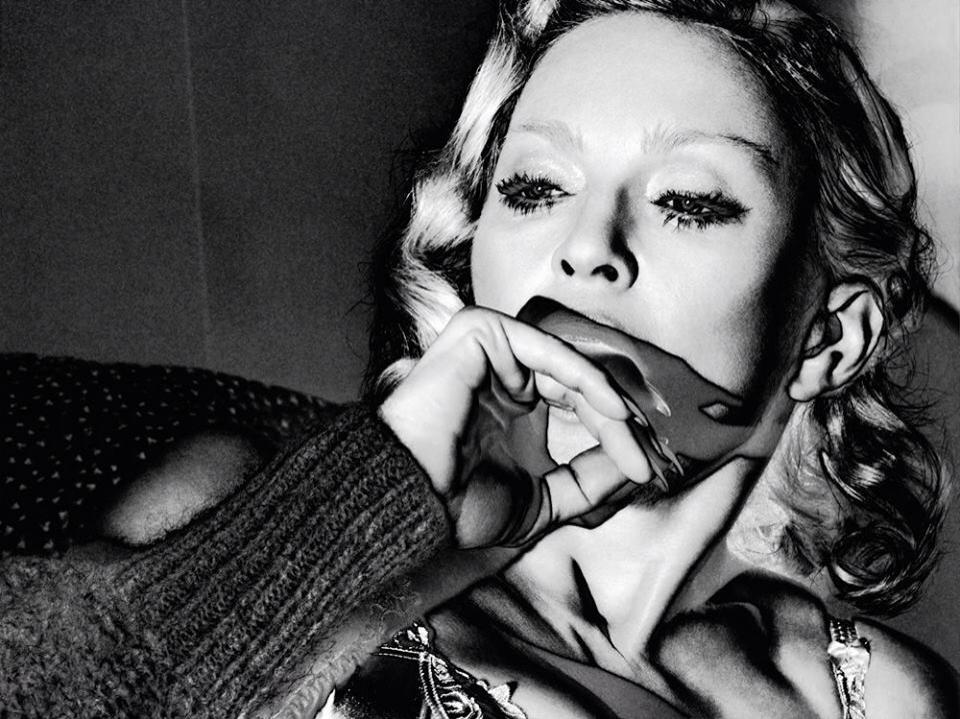 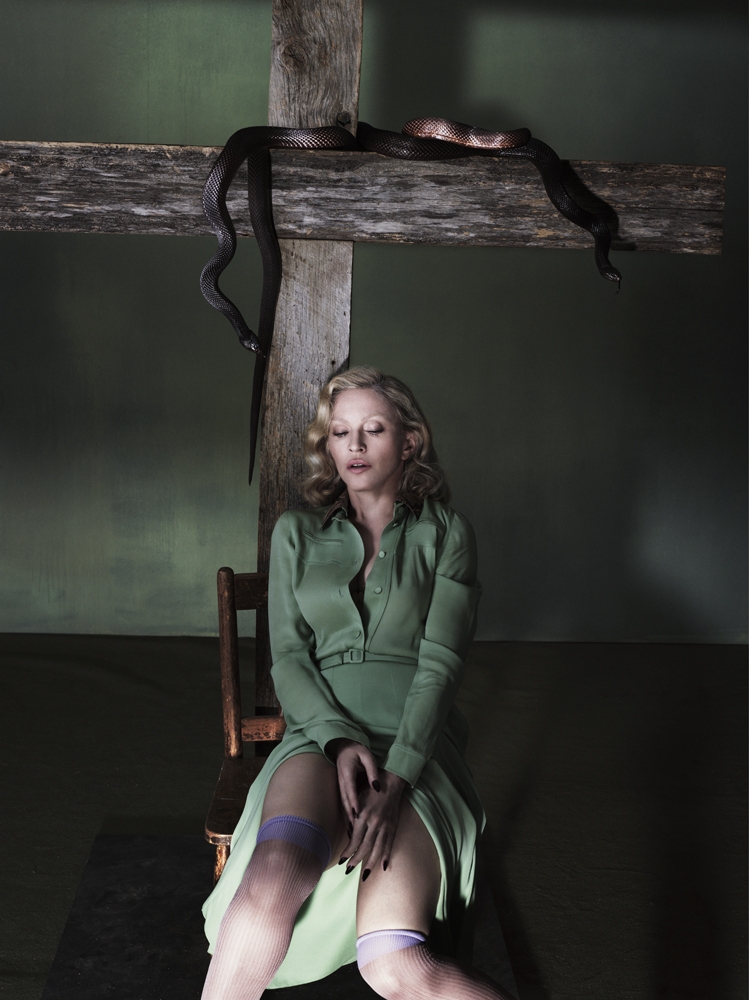 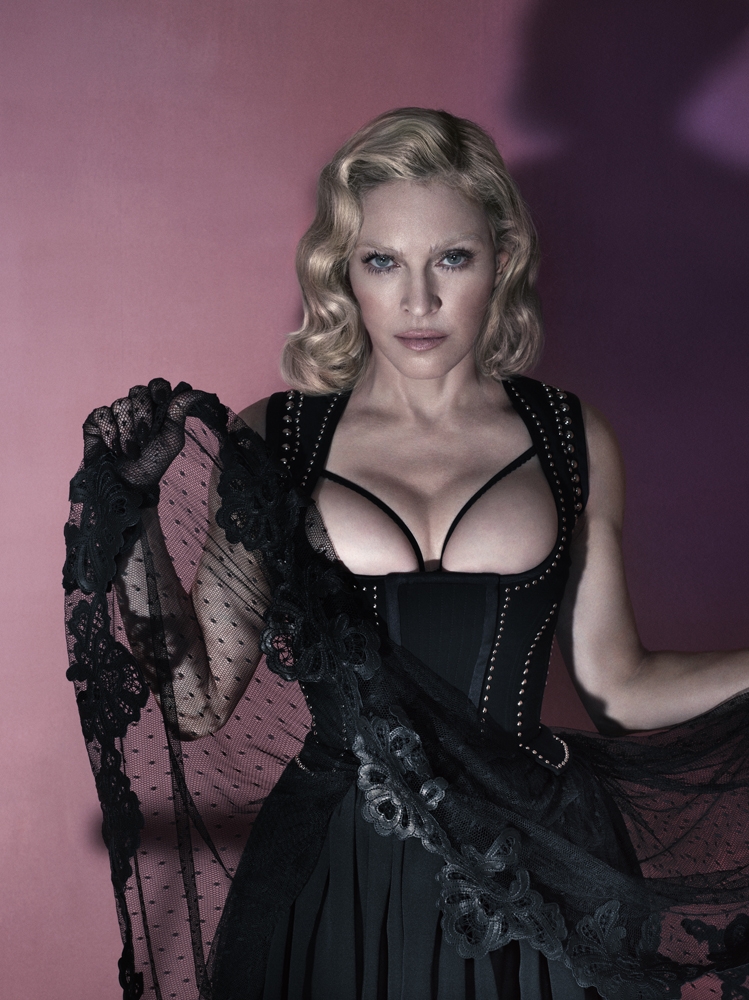 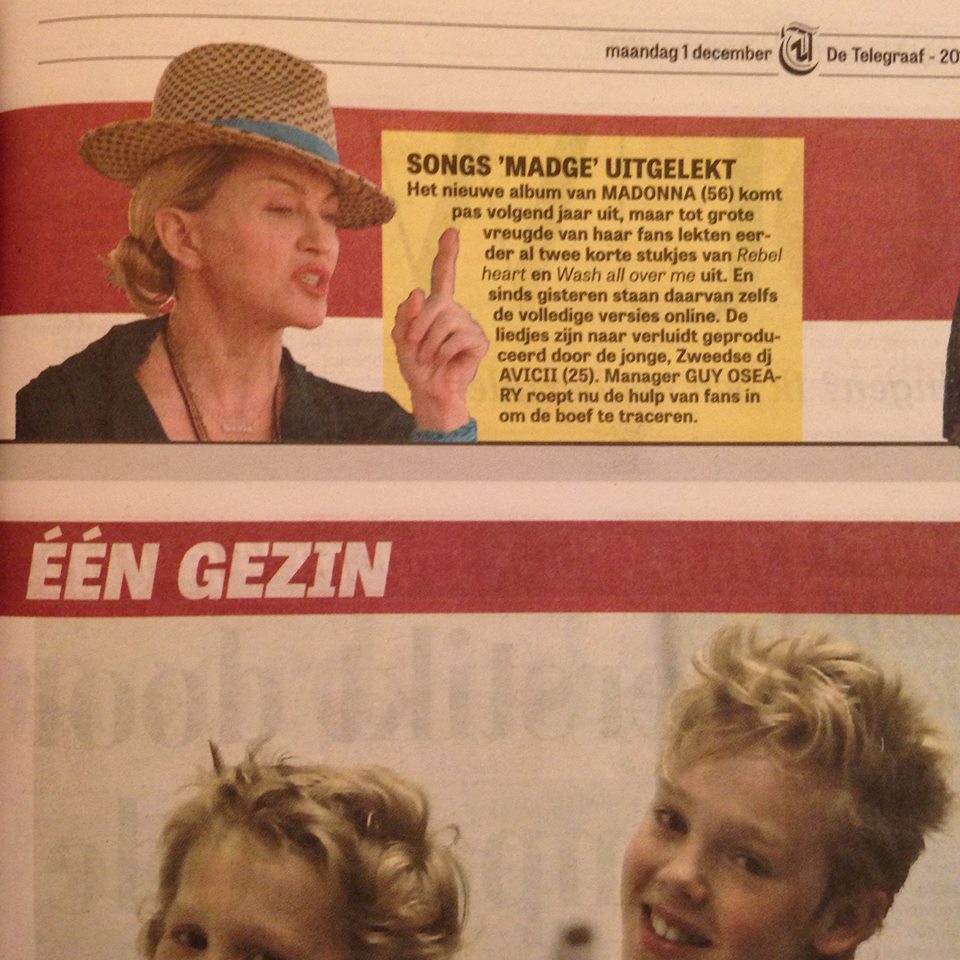