Madonna catapults onto Billboard’s Hot Dance/Electronic Songs chart with three tracks from her upcoming Rebel Heart album: “Bitch I’m Madonna” (No. 14), “Living for Love” (No. 16) and “Unapologetic Bitch” (No. 26).

The songs, available for instant download upon pre-ordering the album (due March 10) or as a la carte purchases, were made available digitally in a surprise move at midnight on Friday (Dec. 19), following massive demo leaks earlier in the week. (An additional 14 demos leaked on Dec. 23.) The songs soar onto the chart, therefore, on the strength of only a partial week of sales and with only small benefits from other metrics (streaming, radio airplay and club play).

“Bitch I’m Madonna,” featuring Nicki Minaj, leads with sales of 12,000 downloads, according to Nielsen Music. “Living,” the album’s first proper single, starts with 10,000 sold and “Unapologetic,” 7,000. The tracks begin on Dance/Electronic Digital Songs at Nos. 9, 12 and 14, respectively. (She notches her first top 10 on the list, which launched in January 2010.)

Two versions of “Living,” the album original and an instrumental, shipped to club DJs on the evening of Dec. 21. Remixes are currently in production and, once approved by Madonna, will be sent out.

Madonna told Billboard on Dec. 21 that “Living” went through more than 10 incarnations during the recording process, including ones with vocals from British singer MNEK. “There will be remixes with MNEK’s voice,” she confirmed.

As for radio airplay, top 40 has so far not warmed to “Living.” It’s received a mere 10 plays at the format (through Dec. 23) (led by KMXV Kansas City, which has sampled it three times). Then again, Interscope Records serviced the song at midnight, Monday morning (Dec. 22) as a soft sell. An Interscope source tells Billboard that the label will re-service the song after New Year’s and decide on an official “add” date shortly thereafter. (Surely the song’s rush release and Christmas week timing, when many programmers are on vacation, play into radio’s general lack of interest in the song so far.)

Madonna last reached the Pop Songs airplay chart in 2012, when “Give Me All Your Luvin’ ” (featuring Minaj and M.I.A.) and “Girl Gone Wild” reached Nos. 24 and 38, respectively. “Luvin’ “was aided by coordinated first-day plays on iHeartMedia-owned stations, as well as Madonna’s performance of it during the halftime show at Super Bowl XLVI.

“The reason I wanted to call the record Rebel Heart was because I felt like it explores two very distinct sides of my personality,” Madonna says. (The album’s buzz spurred Madonna to top the Billboard + Twitter real-time Trending 140 chart on Dec. 22.) “The rebellious, renegade side of me, and the romantic side of me.

“(Fans will) just get my rebellious and romantic side all mixed in together.”)

The MDNA Tour will be repeated on Dutch TV station BNN on New years’ Eve!! The full show in HD quality! The show will air on 03:10 local time.

Sorry for the downtime of our website in the past few days, we had some technical difficulties that needed to be fixed offline. We are back online and will continue to update the site daily 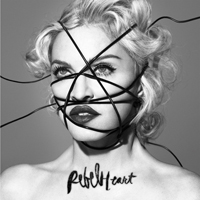 “It’s kind of like the old me and the new me all mixed in together,” Madonna tells Billboard of her stunning new single “Living For Love.”

It’s a rather large understatement to say that it’s been a crazy couple of weeks for Madonna.

On Tuesday night, more than 10 of the singer’s unreleased demo recordings turned up on the Internet, causing the singer and her team to go into “overdrive” to combat the stolen leaks. (“I haven’t slept in a week,” she says.) The songs were from the sessions for her forthcoming 13th studio album, which at the time, had not been announced (and is still not finished).

To counter the leak, Madonna accelerated the release of new music: On Friday night (Dec. 19), she announced that her album, Rebel Heart, would be released on March 10, 2015 through Interscope Records, and six of its tracks would become immediately available to purchase. Among those tracks are the set’s lead single, the Diplo-produced soul-meets-house jam “Living For Love.” How far ahead of schedule was the release? The single wasn’t supposed to premiere until Feb. 14, 2015.

The album — which features a collaboration with Nicki Minaj — is also available to pre-order, and has topped the iTunes Store’s top albums tally in more than 40 countries, including the United States. She also dominated the real time Billboard + Twitter Trending 140 chart on Saturday night (Dec. 20), where two of the album’s songs (“Living For Love” and “Bitch, I’m Madonna”) were concurrently in the top three.

Billboard spoke to Madonna on Sunday morning via phone, to talk about her new album, its “chaotic” recording process, and how her day-to-day business has changed because of the leaks. She also discusses her fondness of Diplo (he’s a “badass”), a possible Grammy Awards performance, and how no one has ever called her an “Unapologetic Bitch.”

Billboard: How are you doing?
Madonna: I’m good. I’m good, I haven’t slept in a week, but I’m good.

I can only imagine the week that you’ve had so far.
Yeah. It’s been a very intense couple of weeks.

Are you OK right now? As OK as you can be considering what’s been happening?
Yeah. I mean, you know, I’m not happy that unreleased demos are out there in the world for people to hear, listen, judge, etcetera, etcetera. Once that happened we went into overdrive. A) Trying to figure out where the leaks were coming from, and then B) Trying to combat that with putting out finished music that people could focus on versus demos that were never meant for anyone to hear. So, that led to no sleep.

You can place your pre-order with Amazon.com now for Rebel Heart on CD, the title will be released on CD on March 10 2015. Please click HERE to place your order

Madonna: ‘I’m living in a state of terror’

Madonna has defended her description of the leak of 13 unfinished demos from her forthcoming album as “a form of terrorism” and “artistic rape”.

Speaking to the Guardian on Sunday, the singer said she was “living in a state of terror” following the leak, adding that there was “a big possibility” that they were the result of her personal computer being hacked.

“Obviously there is a person, or a group of people behind this that were essentially terrorising me. I don’t want to sound alarming, but certainly that’s how I felt. It’s one thing if someone comes into your house and steals a painting off your wall – that’s also a violation – but your work, as an artist, that’s devastating. I’m an artistic person, I’m very expressive. I’m sorry if words alarm people, but that’s what it felt like. It was not a consensual agreement. I did not say, ‘Hey, here’s my music, and it’s finished.’ It was theft.”

On Saturday, Madonna unexpectedly released six tracks from Rebel Heart on iTunes, following the leak of the unfinished songs earlier in the week; the album itself is not due for release until March. She immediately reached No 1 in the iTunes chart in 36 countries, a situation she described as “a miracle”.

Click HERE to read full article by The Guardian 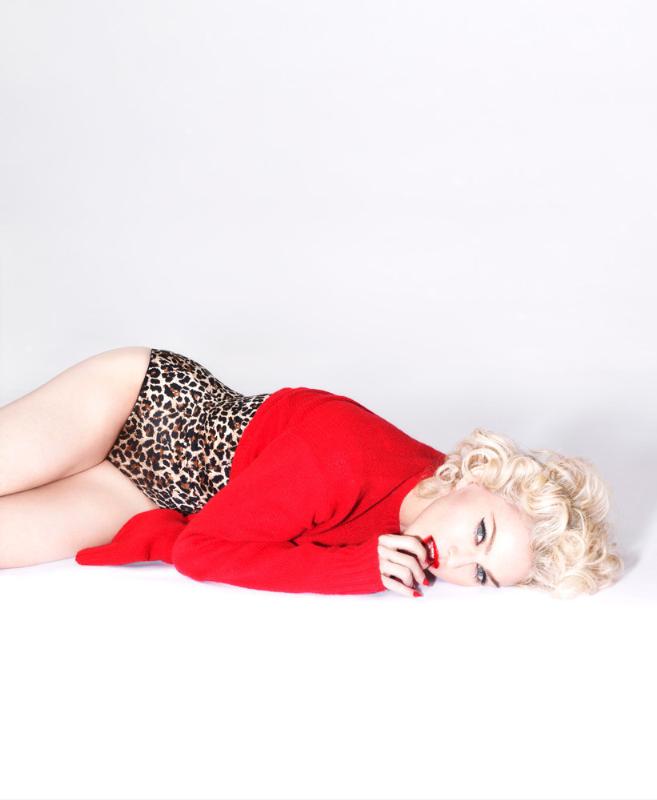 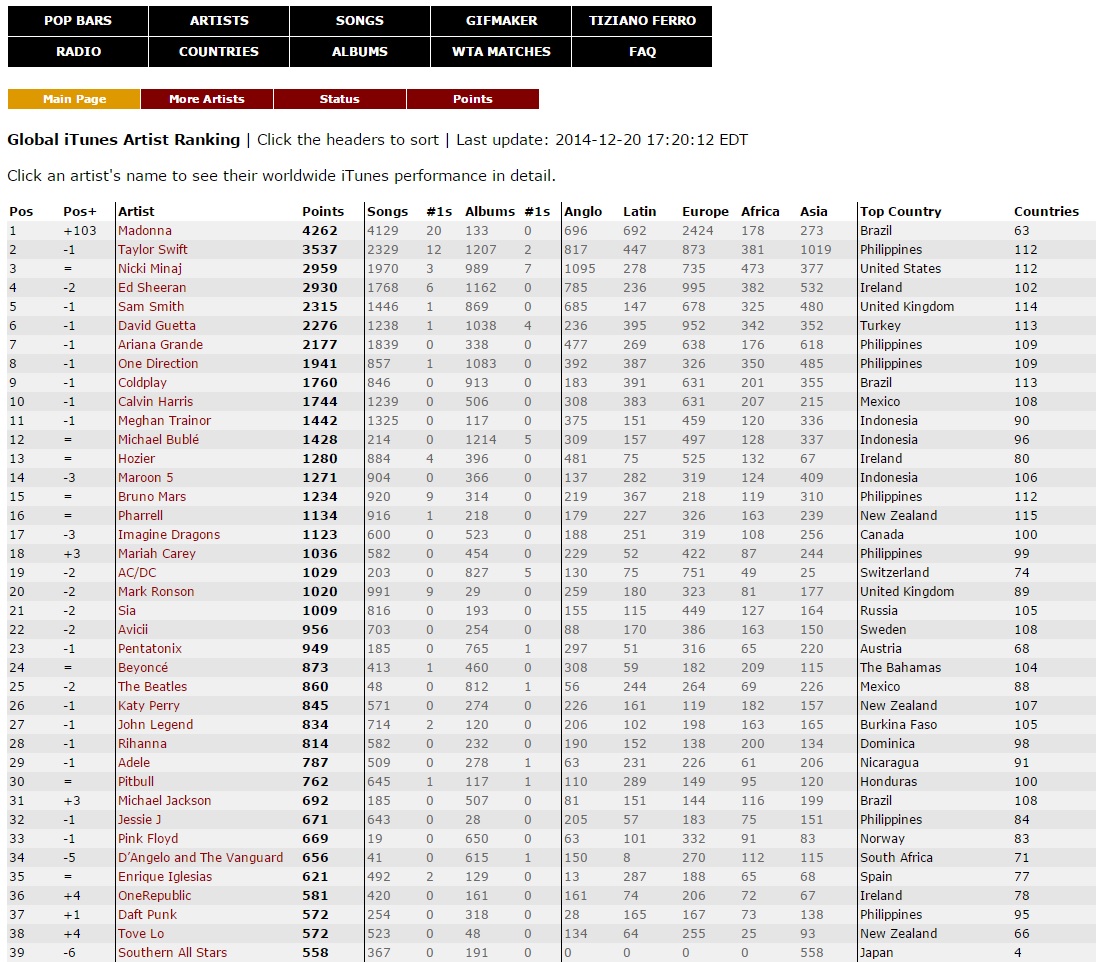 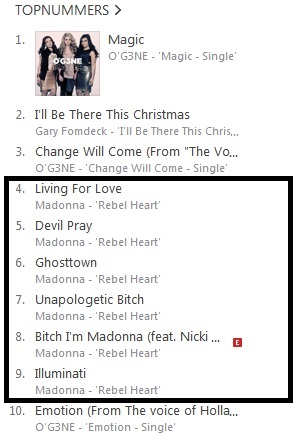