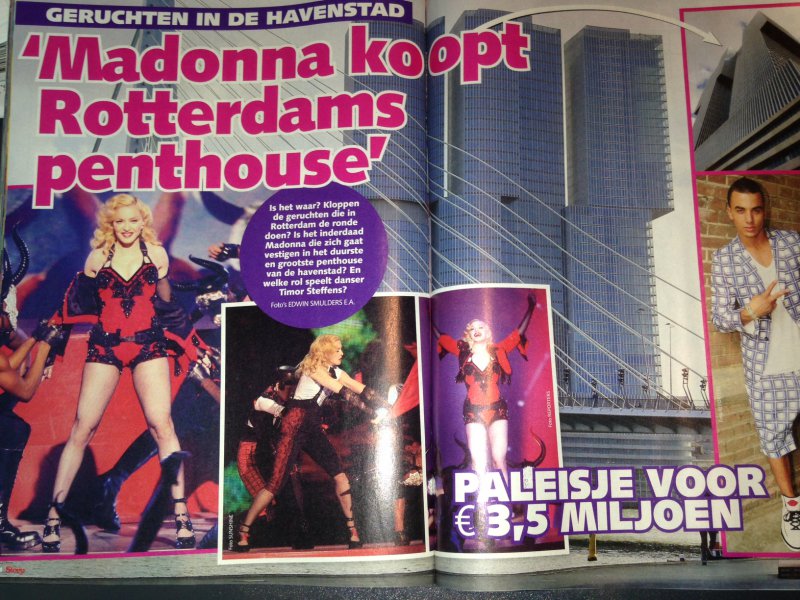 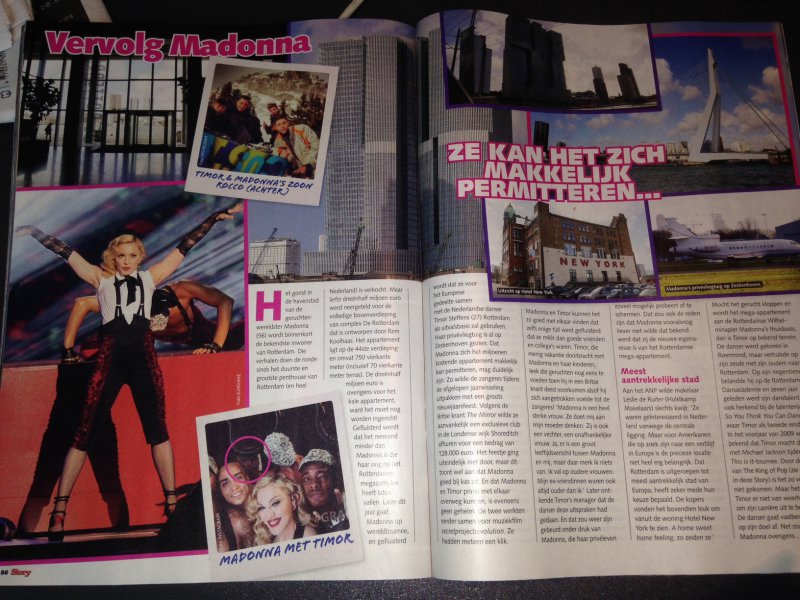 With an article on her falling at the Brit Awards 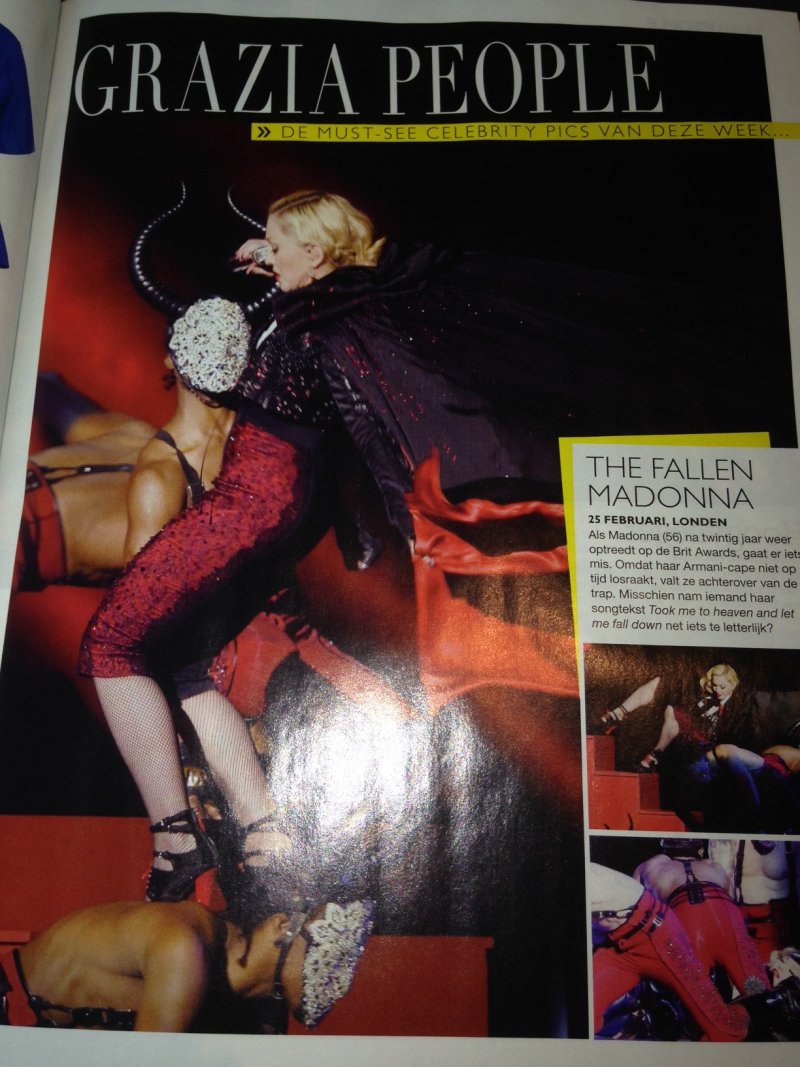 To celebrate the March 10th release of her album Rebel Heart, Madonna will host an exclusive Instagram Q&A!

Want to ask our Rebel Heart a question?
-Post a video to your Instagram asking Madonna a question before 6pm PST / 9pm EST on Monday, March 9th.
-Hashtag the video with #AskMadonna

Madonna will comment on your video answering your question starting around 6pm EST on Tuesday, March 10th.

Be creative, be fun, be a true Rebel Heart and get ready for the unexpected. . . 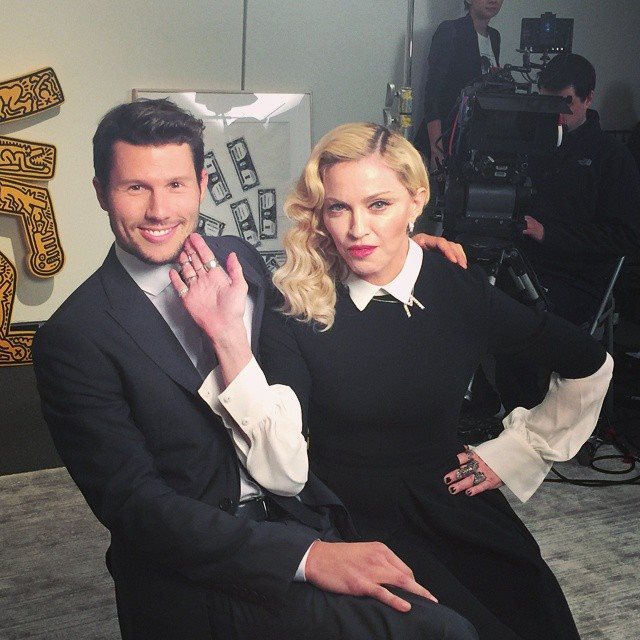 Madonna Talks About ‘Rebel Heart,’ Her Fall and More

Madonna was perfectly turned out and running nearly an hour late for an interview at her Upper East Side home on Wednesday evening. She looked tense as she apologized. “I’m late for everything now,” she said.

She added that she has been in a rush since December, when a hacker put unfinished songs online from her new album, “Rebel Heart”; a suspect has been indicted in Israel. Madonna’s immediate response was to release the finished, and much improved, versions of six songs for sale; they zoomed into the top 10 worldwide. She also worked frantically to finish the rest of the album, which arrives on Tuesday. It’s at once familiar — full of love, dancing, empowerment, blasphemy and raunch — and up-to-the-minute, made with a huge number of collaborators and tweaked by multiple hands under Madonna’s constant supervision.

“I intended to think about things, choose things more slowly — the whole process,” she said. “Then I got forced into putting everything out, and now I’m trying to catch up with myself.”

This is the specially pressed Living For Love limited edition (200) DVD that was given away for free with a Rebel Heart purchase tonight at FAME.

We created the artwork for it and are very proud of it! Due to massive demand from people not being able to make the party, we will be giving away a few. Stay tuned for a competition soon! 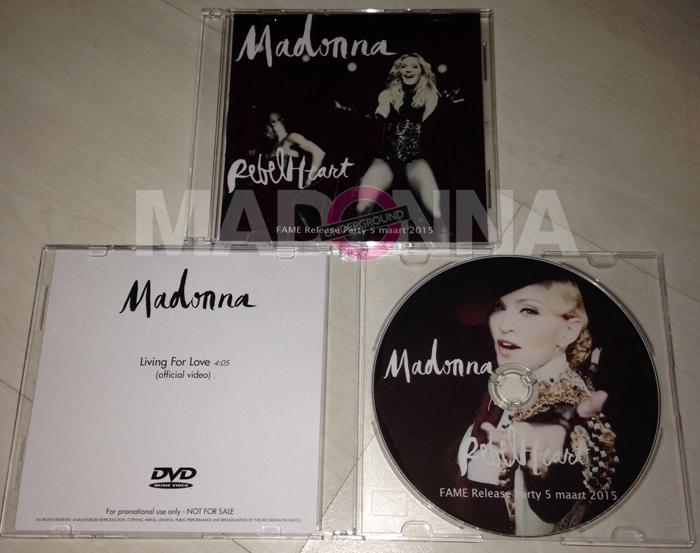 The official Rebel Heart release party in FAME in Amsterdam was a success! Everyone was able to pick up their ordered item (or order them as they were out of stock soon). Everyone was given a free poster and the specially created limited edition DVD of 200, this includes the official video to Living For Love.

The CD was played and everyone danced to M’s new songs, we will upload the gallery asap! Stay tuned

Nova’s Red Room will offer exclusive access to one stop on the United States leg of Madonna’s upcoming Rebel Heart Tour. This event with the seven-time Grammy® Award-winning icon will be exclusively for Nova listeners from around the country.

In order to gain entry into this once-in-a-lifetime experience, fans will need to listen to the Nova Network beginning Monday 9 March.

A select number of winners will be flown to American during the opening leg of Madonna’s highly-anticipated Rebel Heart Tour where they will attend a soundcheck for the superstar and later that night catch the full concert where she will perform tracks from her 13th studio album.

NOVA Entertainment’s Group Program Director Paul Jackson said, “We’re thrilled to have this type of access to Madonna for this exclusive event. Nova’s Red Room with Madonna will allow our listeners to get up close and intimate with one of the most iconic artists of all time.”

Madonna will bring her Rebel Heart tour to Australia in early 2016 with dates to be announced shortly.

Date to be announced

Madonna on Making ‘Rebel Heart,’ the Age of Distraction and Joan of Arc

Madonna was tired but cheerful when she sat down in her Manhattan mansion for her Rolling Stone cover-story interview, just after the Grammys in February. She gave a mini-tour of a small portion of her house, pointing out the Debbie Harry and David Bowie photos in her elevator (“nobody in their 20s knows who that is”), the one-of-a-kind collage the late Keith Haring made for her and many photos by her friend Steven Klein. In the interview itself, she discussed ageism, Lady Gaga, Kanye West and much more — but there was even more that didn’t make the print edition. Here’s the best of the rest, including a look at the creative process behind her new album, Rebel Heart.

I enjoyed the Grammys performance — and watching the rehearsals as well.

It’s a process, yeah. I enjoyed the rehearsals more than the performance.

Really?
I enjoy the process of everything more than the pressure of the finished product. It’s like everything. When I go on tour, I like the rehearsal. I like the creation of everything. like being able to wear my rehearsal clothes and be sweaty and not having to worry about how I look and just get into what it is I’m trying to say and do. Same with making music.

You know, the process is obviously much more liberating than delivering something for the world to judge. [Laughs] Because then you have to say, “This is the final thing.” But actually, it’s never the final thing. You wish you could do it again, or tweak it just a little bit more, or change things. Well, that’s what art is. So I enjoyed the Grammys. But after I did it, I wanted to do it again, only better. [Laughs] And of course, my experience of it is not what everybody else is experiencing. And then you have the TV aspect of it, which is, who knows what they filmed?
Read full interview here: https://www.rollingstone.com/music/features/madonna-on-making-rebel-heart-the-age-of-distraction-and-joan-of-arc-20150305#ixzz3TWkdN88X
Follow us: @rollingstone on Twitter | RollingStone on Facebook

Bol.com just confirmed to us that due to technical issues the pre-sale link for the tickets for Madonna’s show on December 5 in the Ziggo Dome has been delayed. The link was scheduled to live at 10am this morning, but due to a glitch in the system the link did not work.

They have been working on it all day and believe to have the link ready somewhere this afternoon/beginning of the evening.

Stay tuned! You will get the link.

All the editions, the free poster + the 200 limited edition DVD (with artwork by MadonnaUnderground) DO NOT MISS OUT! See you all tonight at FAME! 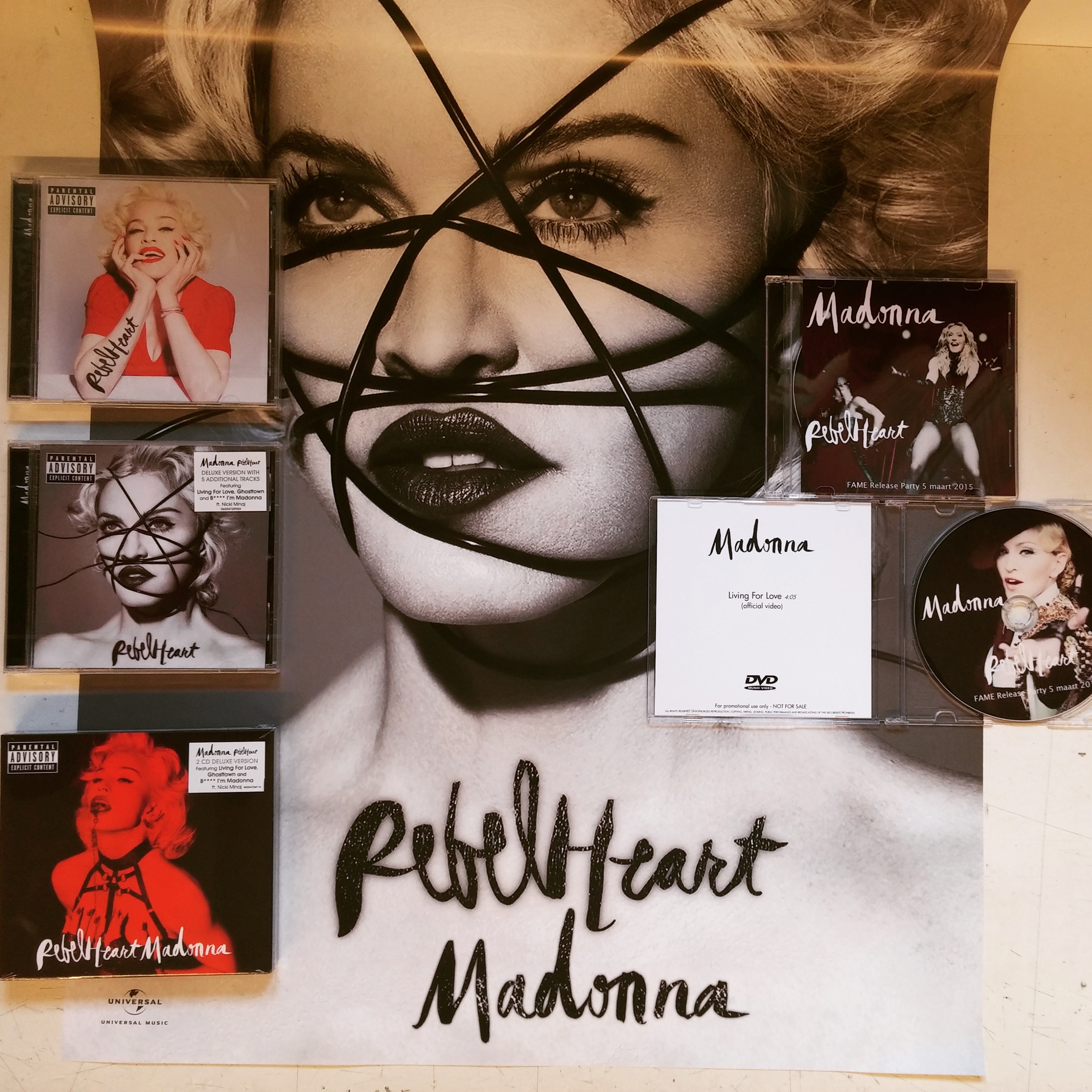 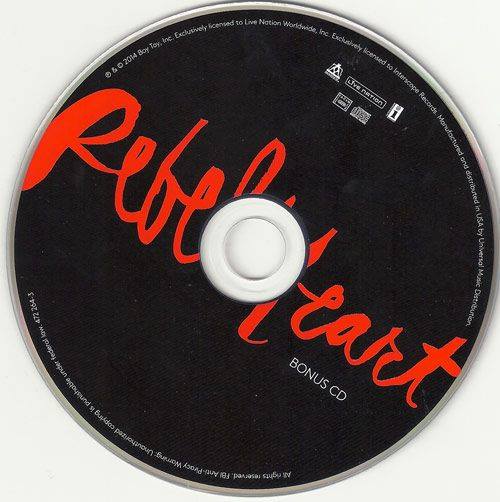 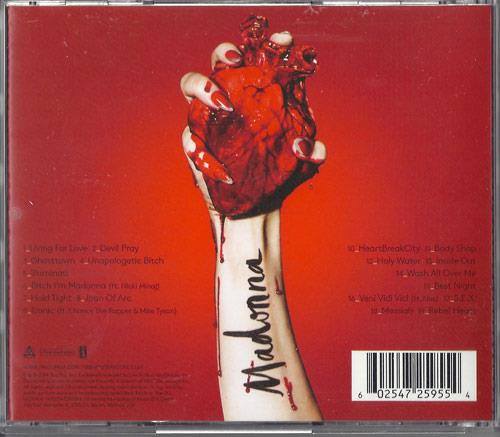 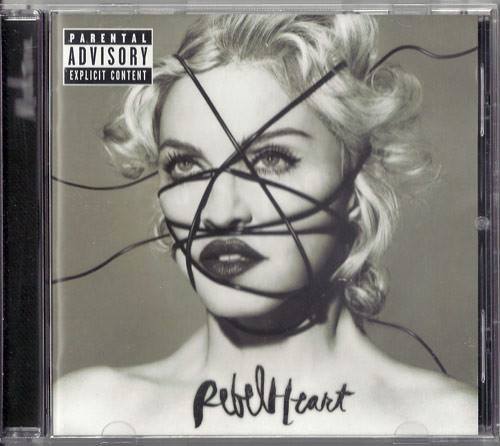 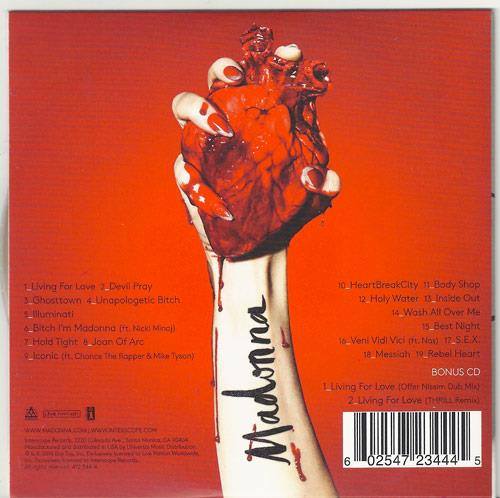 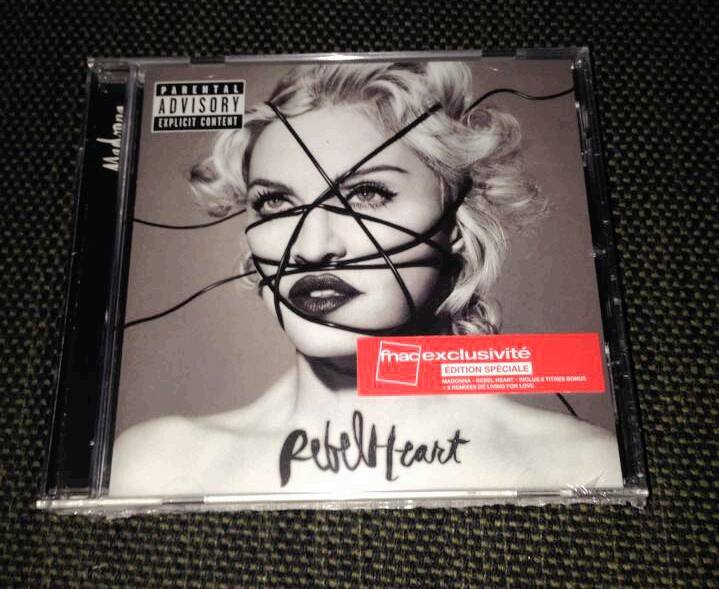 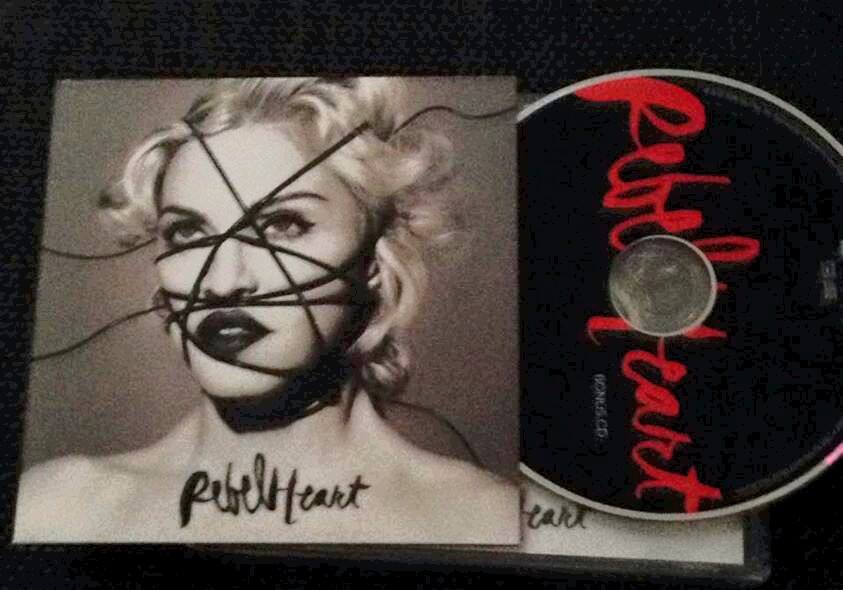 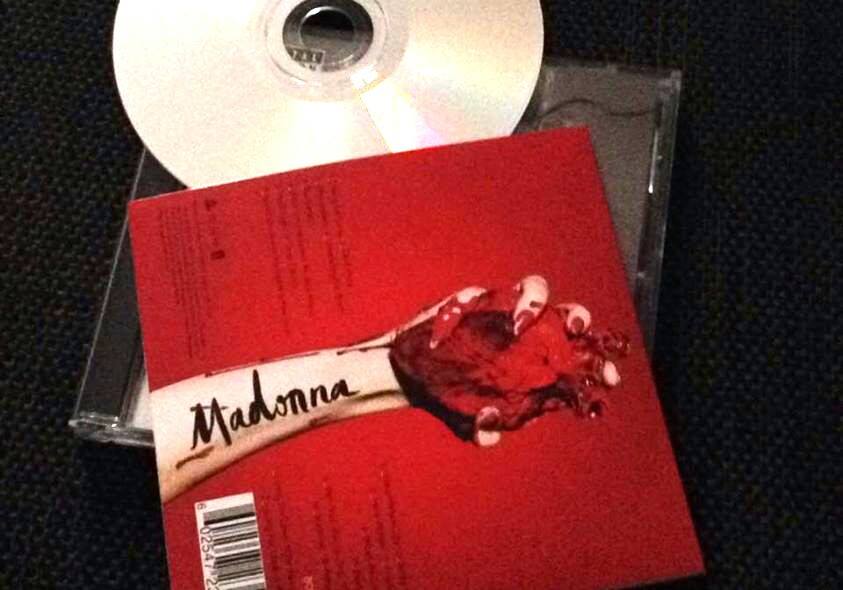 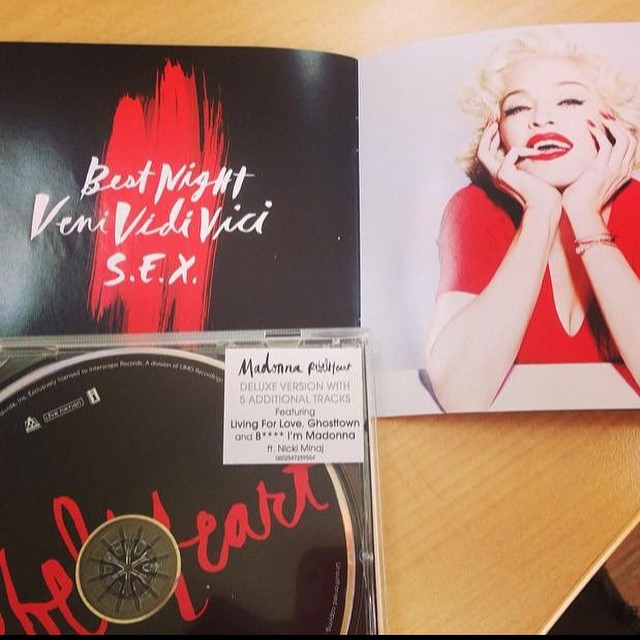 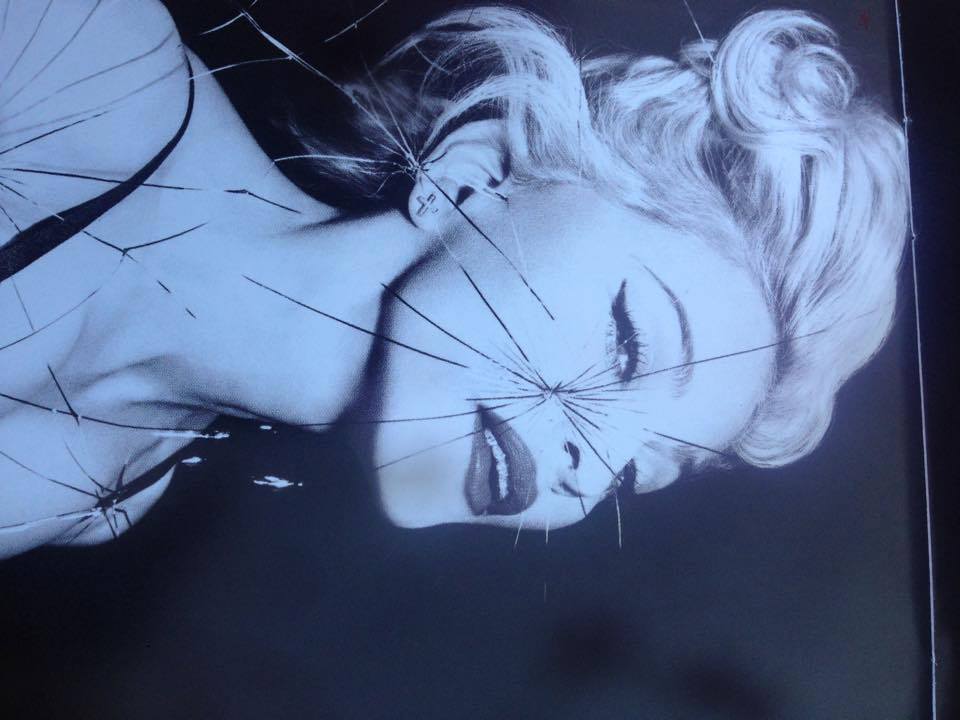 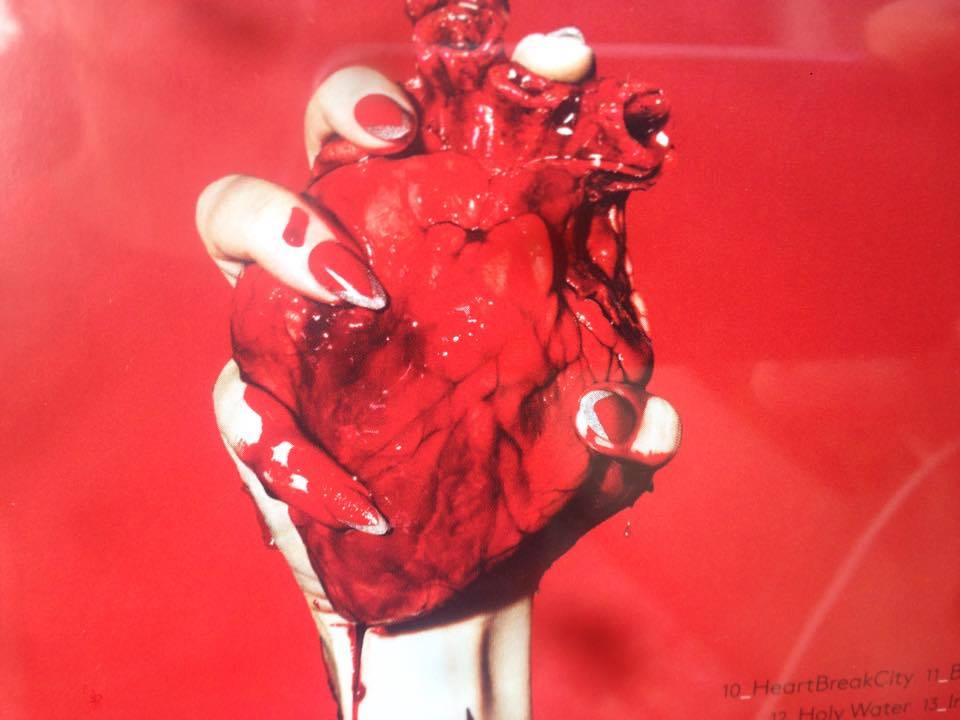 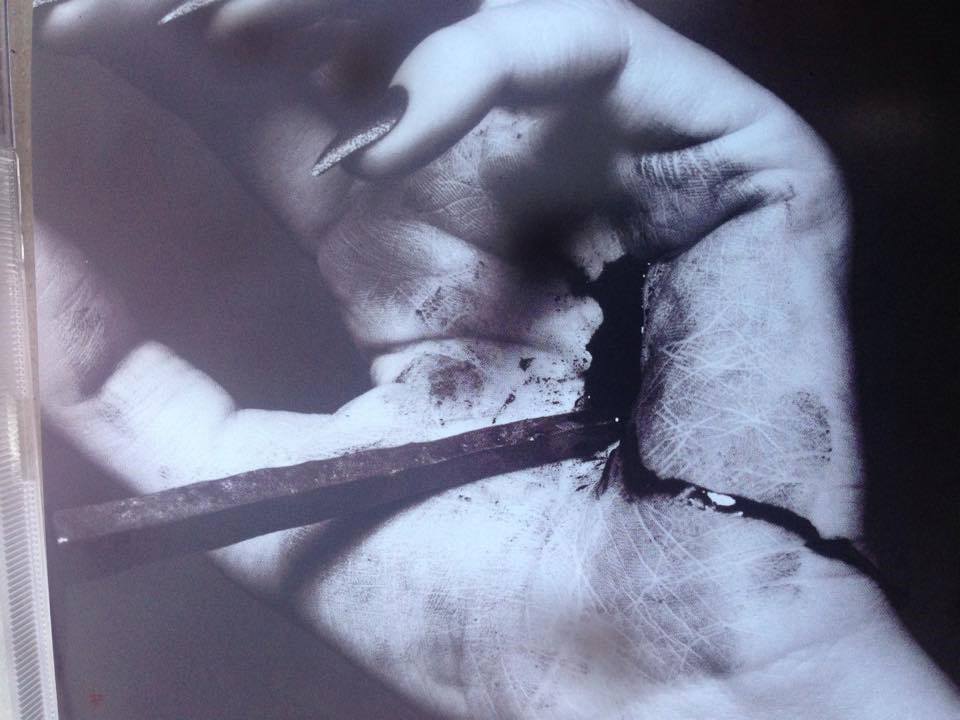 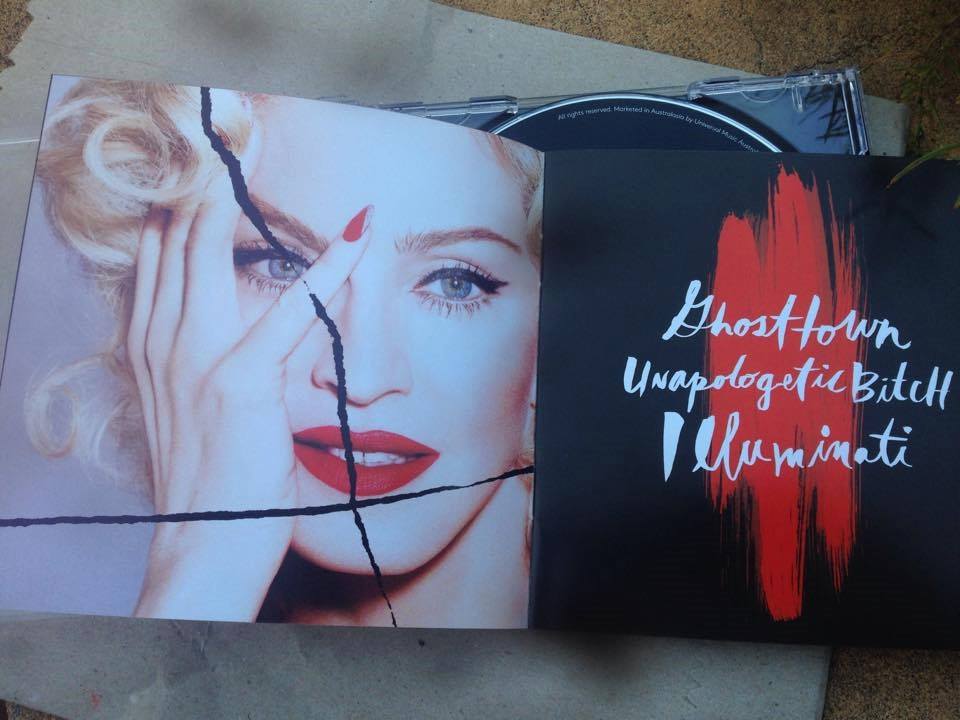 Also in the Thursday March 5 edition of Dutch Telegraaf, is this tour ad for the show in the Ziggo Dome 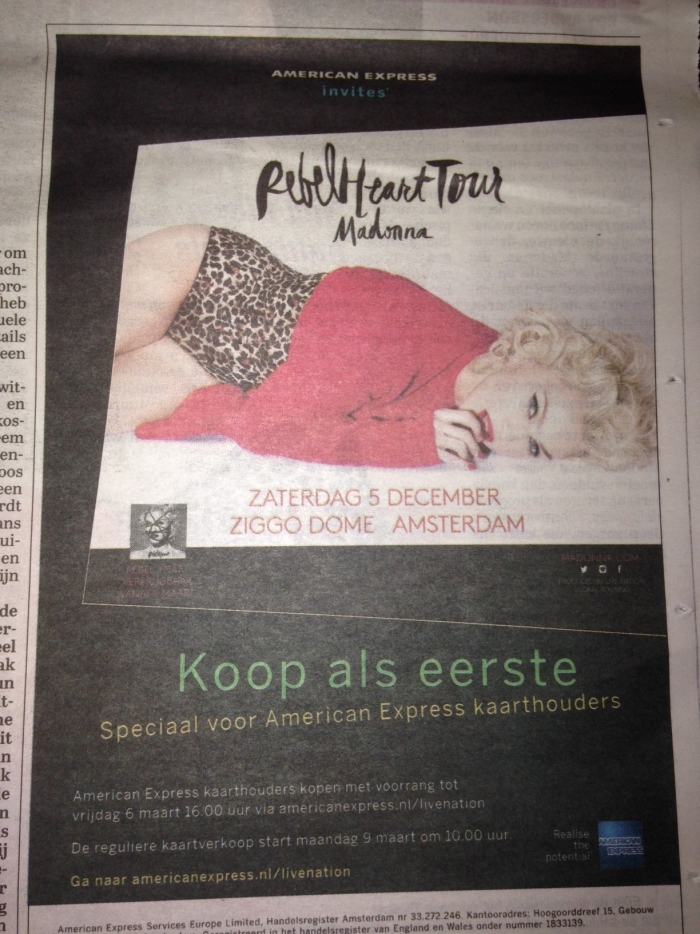