Meanwhile the video is still going strong with now over 72 million views! Check it out by clicking the play button on the video beneath our header.

“Ray of Light” was an album that seemed to change things, from music to fashion to pursuits of enlightenment and religious understanding. And it didn’t sacrifice the joys of life in the process.

In 1998, there was a lot of music out that I just didn’t care about. Britney Spears, Sugar Ray and boy bands — it just didn’t resonate with me.

Out of the blue came something I didn’t expect: An important, career-defining work from Madonna.

As a teen male, my Madonna fandom was more rooted in her looks and her antics than in her music. I liked a handful of songs a lot, but I dismissed her as a dancer who got lucky with the right songs at the right time.

I’m pleased to say that I outgrew that outlook long ago.

But in 1998, I generally saw Madonna as a person who made headlines for who she was dating or what she was (or wasn’t) wearing.

So I was totally unprepared for the brilliance that was “Ray of Light.”

By overwhelming demand, Madonna is adding a second night in Manila! The second night of her Rebel Heart Tour is set for February 25, 2016 at Mall Of Asia Arena in Manila!
Our pre-sale for Manila is open to all registered Week #10 Icon Live Pass holders. Lifetime Legacy member priority access will begin at 10am PHT. On the morning of the pre-sale, login to madonna.com and go to the Tour page. You will see your unique passcode displayed at the top of the page. 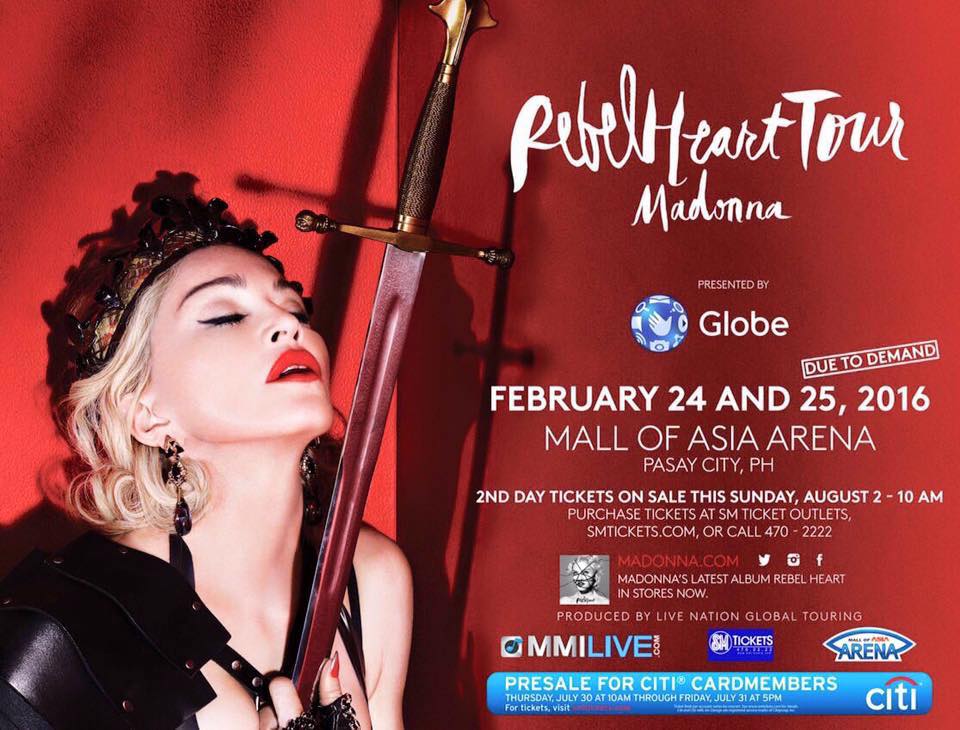 Reminder: The MDNA Tour on BNN this Friday!

The show is in full HD, to many viewers the quality was much better than the released product, so be sure to catch it!

A$AP Ferg in the Studio With Madonna & Pharrell, Working on New Album

A$AP Ferg’s next album is crazy — or so says Madonna, Pharrell, and Missy Elliott. In a recent interview with Revolt TV, the Trap Lord artist announced his next album release. “I’m working on my album. The album is coming out this year, definitely,” he said.

Definitely is a strong word coming from the artist who also claimed the album would be coming out this summer. Yet, we’re willing to hold off for a little longer. From what we’ve heard so far, it looks like the wait will pay off.

With an A-list crew like this, we don’t blame Ferg for taking his time. This year or next, crazy or not, it’s safe to say that Ferg is getting his fans excited for this next release.

By now we all know that Madonna in a live setting is an unstoppable force and one that few other pop performers even come close to.

She sings — no lip-synching here, honey — dances exquisitely, and plays electric guitar. Each new tweak to her stage costume is thrilling. Somehow all of it has a message and often subtext too.

Her backup dancers are also legendary and a huge part of the cornucopia of stage delights.

Two just-released teasers for Madonna’s upcoming Rebel Heart world tour are each only 30 seconds long, but together they show that in this tour, like all her tours since the early 1980s, Madonna just may outdo herself — again. This footage of the tour’s new choreography, as well as a sneak peek of some costumes (nuns, anyone?), should get fans old and new excited.

Enjoy the rehearsal footage for yourself — and rejoice if you’ve got a ticket to one of the shows!

The Rebel Heart tour was supposed to kick off in August in Miami, but Madonna postponed that to add more rehearsal time. “As my fans already know, my show has to be perfect,” she explained in a statement. Now the festivities begin September 9 in Montreal.

Madonna Defends Tidal: ‘We’re Working Out a Lot of Kinks’

Madonna attends the “China: Through The Looking Glass” Costume Institute Benefit Gala at the Metropolitan Museum of Art on May 4, 2015 in New York City.

“We live in a society now where everybody just expects everything to be for free, but you don’t get a house for free,” says the pop superstar.

Tidal has seemingly been under fire ever since launching in March: the streaming music service is co-owned by some of the medium’s biggest stars, but its pricing has been criticized, its interim CEO recently left and Birdman is reportedly suing the company for $50 million. In a new interview with the Associated Press,Madonna — one of the company’s many famous co-owners — defended Tidal by pointing to the company’s core ideals and hinting at more upcoming changes.

“It’s just the beginning, so we’re working out a lot of kinks and hopefully we’re going to build something unique and amazing that’s going to attract a lot of people,” says Madonna.

One of the “kinks” that Tidal has been working out has been an overall image problem, especially when compared to cheaper subscription services like Apple Music. Earlier this month, Tidal announced a family plan with discounted prices for multiple subscribers using the same account.

Madonna Compares Herself to Picasso, Says Creativity Doesn’t Have an ‘Expiration Date’

“We live in a society now where everybody just expects everything to be for free, but you don’t get a house for free; you have to pay somebody to build it,” she continued.

Last month, Madonna premiered her video for “Bitch I’m Madonna” exclusively on Tidal, but the service was mired in technical problems and was forced to tweet an apology. Watch the video below:

Watch Madonna and Her Dancers Rehearse for Rebel Heart Tour

Madonna doesn’t embark on her Rebel Heart World Tour until September, but the singer has shared a pair of teaser videos that give fans a behind-the-scenes look at the intense, high-energy rehearsals for the six-month-long international trek.

In the first teaser, soundtracked by Rebel Heart‘s “Devil Pray,” fans get a peak at the various costumes – nuns on stripper poles, a flamenco-inspired routine – and sophisticated dance moves that will go into each show. There’s also a glimpse of Madonna herself preparing for the string of performances. In the second video, featuring “Iconic,” fans witness the epic scope of the touring production as dozens of dancers rehearse atop elaborate sets armed with props.

Madonna’s Rebel Heart Tour will kick off September 9th at Montreal’s Bell Centre. She’ll continue to hit North American arenas throughout September and October before heading to Europe for two months. Diplo will serve as Madonna’s opening act for the Quebec gigs, while comedian Amy Schumer will open for the singer’s New York-area shows. In January, Madonna will return stateside to fulfill her five postponed concerts and then chart course to Asia and Australasia. The Rebel Heart Tour will conclude March 27th, 2016 in Brisbane, Australia.

The tour was originally scheduled to begin on August 29th in Miami, but Madonna postponed the first five shows in order to add more rehearsal time. “As my fans already know, the show has to be perfect,” Madonna said in a statement. “Assembling all the elements will require more time than we realized. I apologize for any inconvenience this may cause my fans. I can promise you this show will be worth the wait. Can’t wait to share it with all my Rebel Hearts out there.” 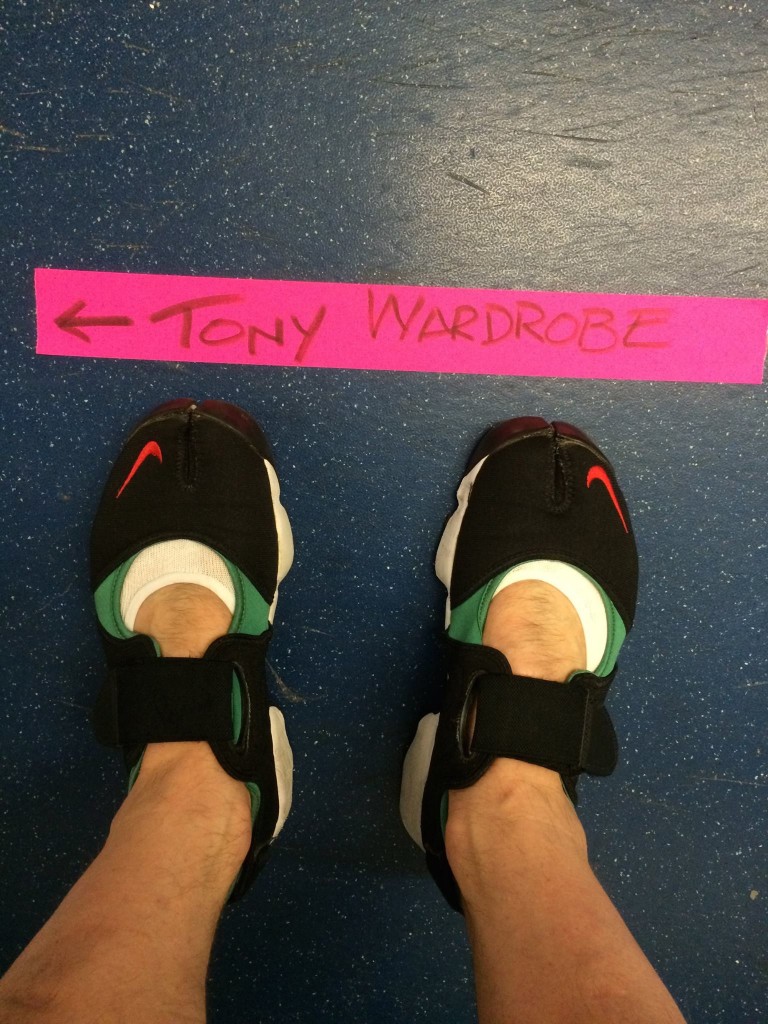 I bet you think its exciting to rehearse like you’re training for a marathon,watch beautiful costumes develop and work around the most creative minds in the business don’t you?
WELL YOU WOULD BE ABSOLUTELY RIGHT!!!!!!!
Trust me you have never seen one like this before!

We have just updated our Like a Prayer Promo page in the Album Promo section with these very scarce official Dutch (promo) posters. Various were available for general sale in shops in Holland back in the day, now long out of print.

Visit HERE to check out our Like a Prayer Album Promo page, the posters have been added to the ‘memorabilia’ tab 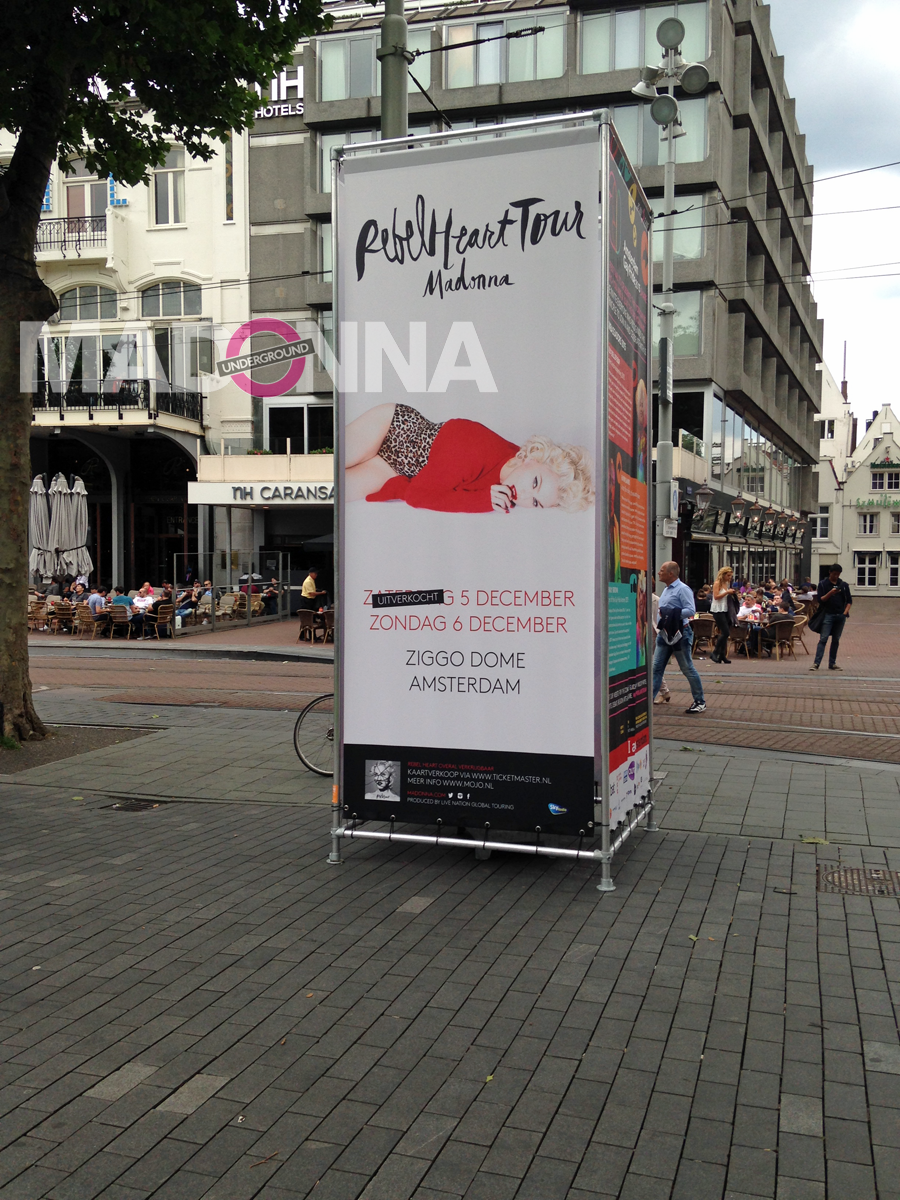 Spotted in Amsterdam at the Rembrandtplein; one of the many banners displayed throughout the city

We would like to introduce you to our webdesigner, Dirk.

He’s been working with us for some time now, but finally decided to step out of the shadows. 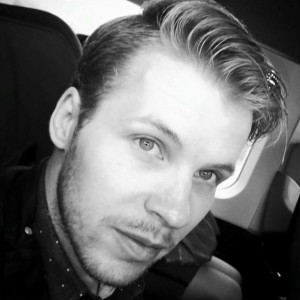