Madonna to direct another film next year and more (watch videos)

Madonna recorded a video especially to promote her MDNA Skin line in Hong Kong, here she also states that we can expect the Rebel Heart Tour DVD release next year and she’s hoping to direct another movie.

??? “Gonna spray your face with toner…all over & over” – #Madonna #VIDEO promoting MDNA Skin in China (? @xavier69 for vid again) pic.twitter.com/3WYAzuGSlI

Truth or Dare from Alek Keshishian on Vimeo.

Madonna is definitely #WithHer. Following her promise of oral sex to those who votefor Hillary Clinton on November 8th, the Material Girl has now announced a “surprise intimate concert on Monday night” in support of the Democratic presidential nominee. The news came on Madonna’s Instagram, though no city or venue was indicated as far as the show’s location — just a note to “stay tuned.”

In the swing state of Ohio, Katy Perry is scheduled to join Clinton at a Cleveland State University campaign stop later today, while it’s rumored that Beyonce will hit stage at husband Jay Z’s get-out-the-vote concert tonight, also in Cleveland, in support of Clinton.

That’s a lot of top-notch activity in the four days before voters hit the polls. As Madge says, stay tuned.

Madonna to play small intimate gig this Monday in support of Hillary?

Check out this fabulous freeze frame from the upcoming Emmy And The Breakfast Club film by cinematographer Jason Montalvo, which stars Jamie Auld as Madonna and is written and directed by Guy Guido.

Jamie Auld does a fantastic job portraying Madonna pre-fame days when it comes to the looks, she makes quite the resemblance. 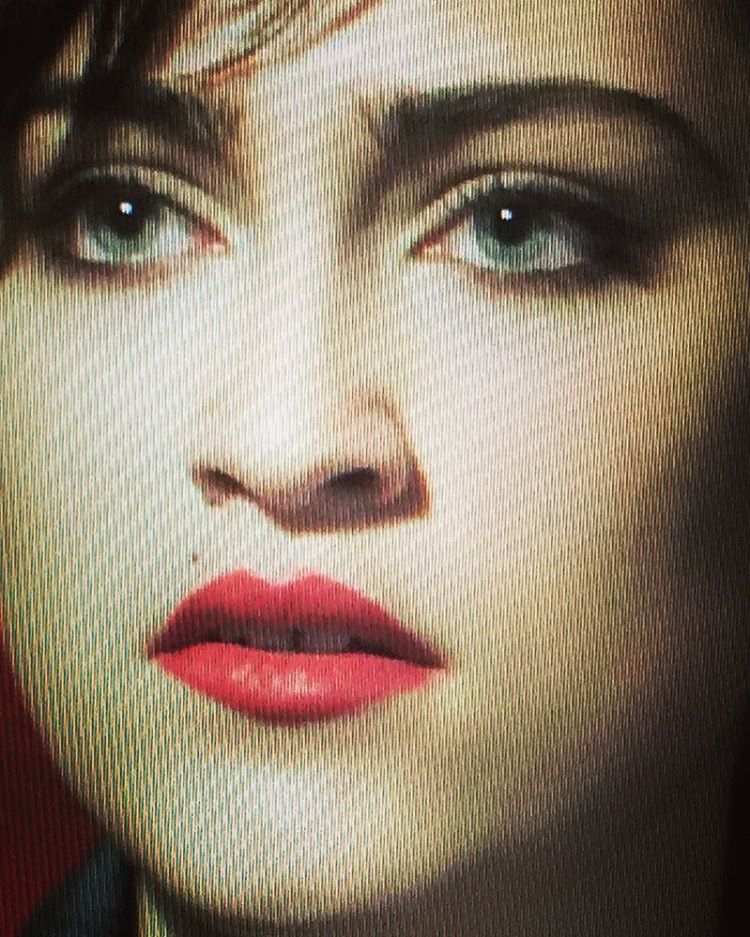 Rebel Heart Tour premiered in Europe 1 year ago! read all about it

Today one year ago Rebel Heart kicked off its European tour in Cologne Germany. Despite the freezing cold many fans queued up for hours in order to get the best ‘seats’ in the Lanxess arena.

To read our personal reports on the Rebel Heart Tour click the following links:

To check out our photo gallery of the European Premiere in Cologne, click HERE

Seymour Stein Reveals the “Embarrasing” Deal He Made with Madonna

Seymour Stein, a bona fide music industry legend, turns 73 this month. Get him talking about music he loves, though, and he’ll match the passion of any young industry whippersnapper pound for pound.

Stein is still every bit as full as admiration for great bands as he was more than half a century ago, when in 1966 he co-founded Sire Records with his friend Richard Gottier. Through Sire, he played a vital role in bringing the likes of Talking Heads, The Ramones, The Cure, Ice-T and Echo & The Bunnymen to mainstream recognition.

And then there was that signing, when Stein fell head over heels for the music and theatricality of Madonna Louise Ciccone — launching the career, in 1982, of a woman who would go on to define music’s pop culture time and time again.

These days Stein plies his A&R trade within the walls of Warner Music Group, and he remains a hero to the ‘next generation’ of independent music executives—those now running labels and publishers around the world.

[PIAS] founder Kenny Gates shared a coffee and a chat with Seymour at SXSW to delve deep into the career history of one of independent music’s true godfathers.

When you signed Madonna, did you think she’d still be making music 30 years later?
I didn’t think about it. What people usually ask me is, Do you think she’d ever be this big? Of course not! I knew she was special.

And you met her through Mark Kamins?
Yes, I’d always befriended Mark. He was a DJ who played all sorts of weird music but somehow made it work — he was playing Faro music, mixing it with African music and making it all work. I gave him $18,000 and I told him: ‘This should be enough for you, over a period of a year or longer — don’t rush it — to make six demos.’ Madonna was the third demo he brought me. I listened to it, and I loved it.

Everyone knows this story: I heard it in the hospital, and I got so excited, I made her come to see me. No, that’s not true — even then you couldn’t make Madonna do anything unless she wanted to! She came to the hospital and we agreed on a deal right then and there. I asked her to go to her lawyers so we could draw up the papers.

Madonna might be the key in bringing more LGBT events to Auburn.

Long-time Madonna fan Ray Isaac wants to use the iconic pop star to encourage fans of all genders out west with a rescreening of the 1985 film Desperately Seeking Susan at Auburn’s Reading Cinema.

“This is a completely gay-friendly venue and community, and I feel like a lot of people coming from Newtown might have this view of Auburn that is just totally wrong,” Mr Isaac said.

“Auburn is my home town, and I’ve taken Madonna shows everywhere and I don’t know why we always have to leave the suburb for our own kind of alternative fun.”

Mr Isaac has previously held Madonna tribute nights in the inner west including Broadway and Newtown and was asked to hold the screening closer to the CBD.

“I usually put my events on in the city, but I decided even though some of the fans wanted it there again, I wanted to give people in the west to chance to get in on the fun.

“It’s intimidating for people that are gay in Auburn to have to travel to Newtown, or even women or men that love Madonna out west; they should get a chance to celebrate our queen,” he said.

Rather than alienating, Mr Isaac wants the event to bring together fans that may not realise they have a common interest.

“Men, women, everyone gets dressed up, the fans are so loyal and love to have fun and they should feel comfortable to leave all the fear and insecurity at the door.

“Let’s be honest, her movies aren’t the best, they’ve all been flops, well maybe not Evita,” Mr Isaac said.

“But that’s not what we love about her. We love that she has no inhibitions and gives us confidence in ourselves.”

The screening will also include behind the scenes videos from the making of the film, cast interviews and a message from director Susan Seidelman.

Desperately Seeking Susan and the Madonna fan night will be held at Auburn’s Reading Cinemas on Saturday at 6pm.

Madonna will be joined by Chris Rock, Sean Penn and Ariana Grande on her Art Basel Miami fundraiser!

Just announced: Madonna will be joined by Chris Rock, Ariana Grande, Sean Penn and James Corden on the Art Basel Miami fundraiser for Raising Malawi on December 2 in Miami. 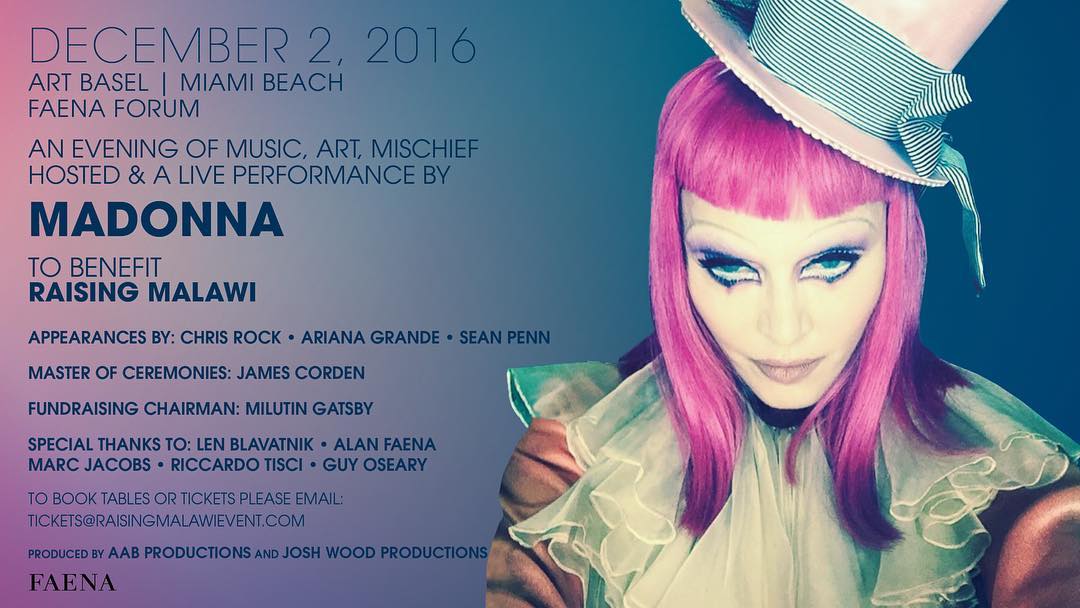 We present to you our new Autographs gallery showcasing Madonna’s genuine autograph. Throughout the years we have received many requests by fans to verify whether a Madonna signature was real or not, we have decided to put this up for information purposes only.

Sadly we still see many fans spending loads of money through namely eBay (and even auction houses) on fake autographs, some very poorly executed. Before you do decide to buy a Madonna autograph, please check this item with one of the autographs pictured in our gallery. You can also always visit the Madonna Autographs Facebook group

Enjoy our Autographs gallery now, in the menu under ‘Special Reports’ 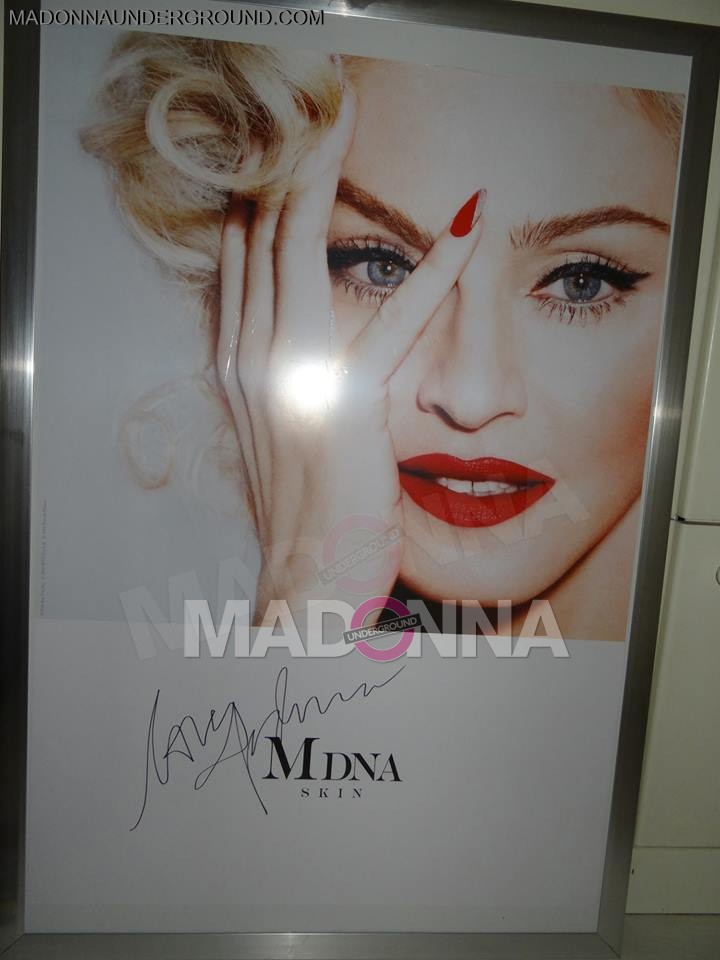 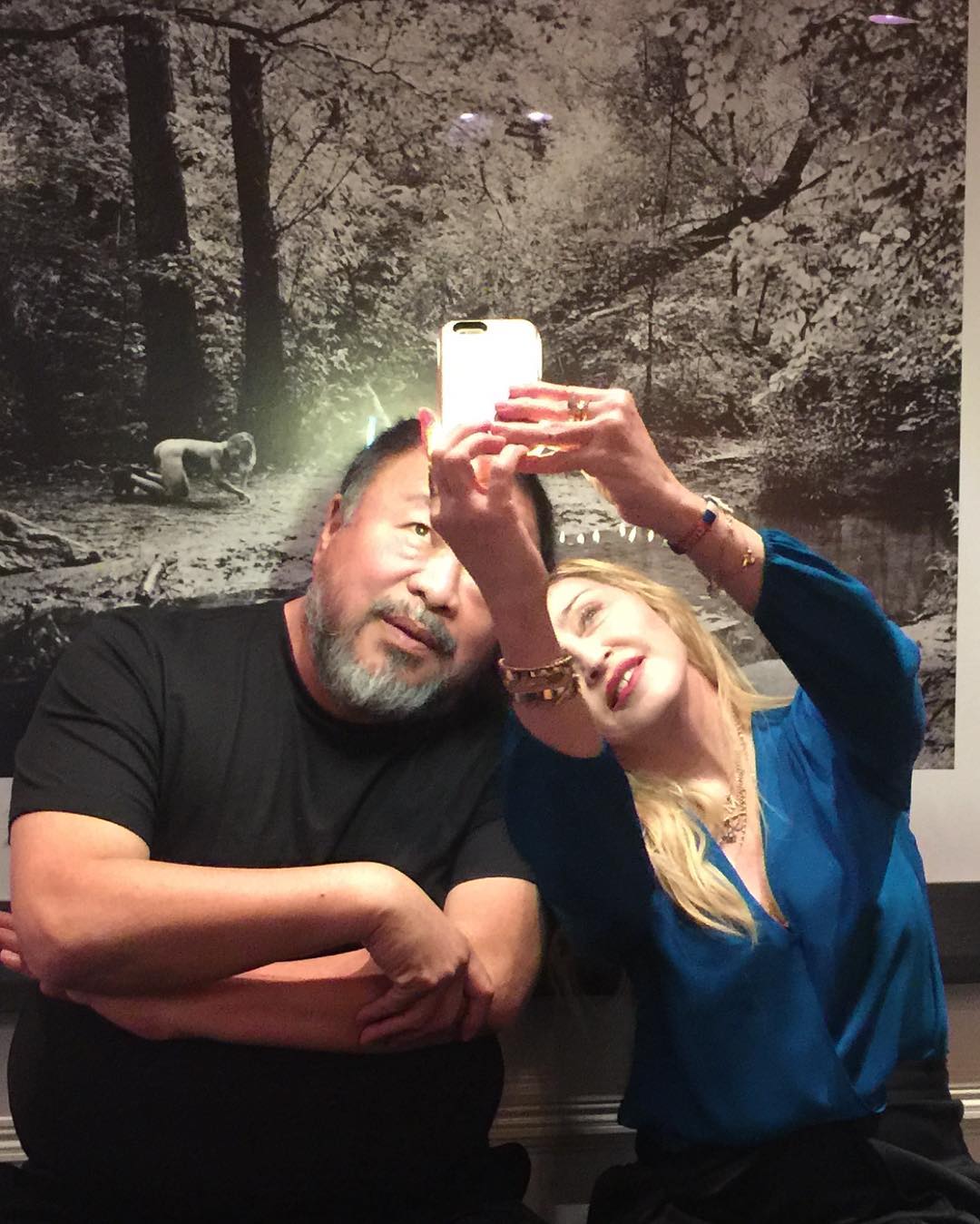 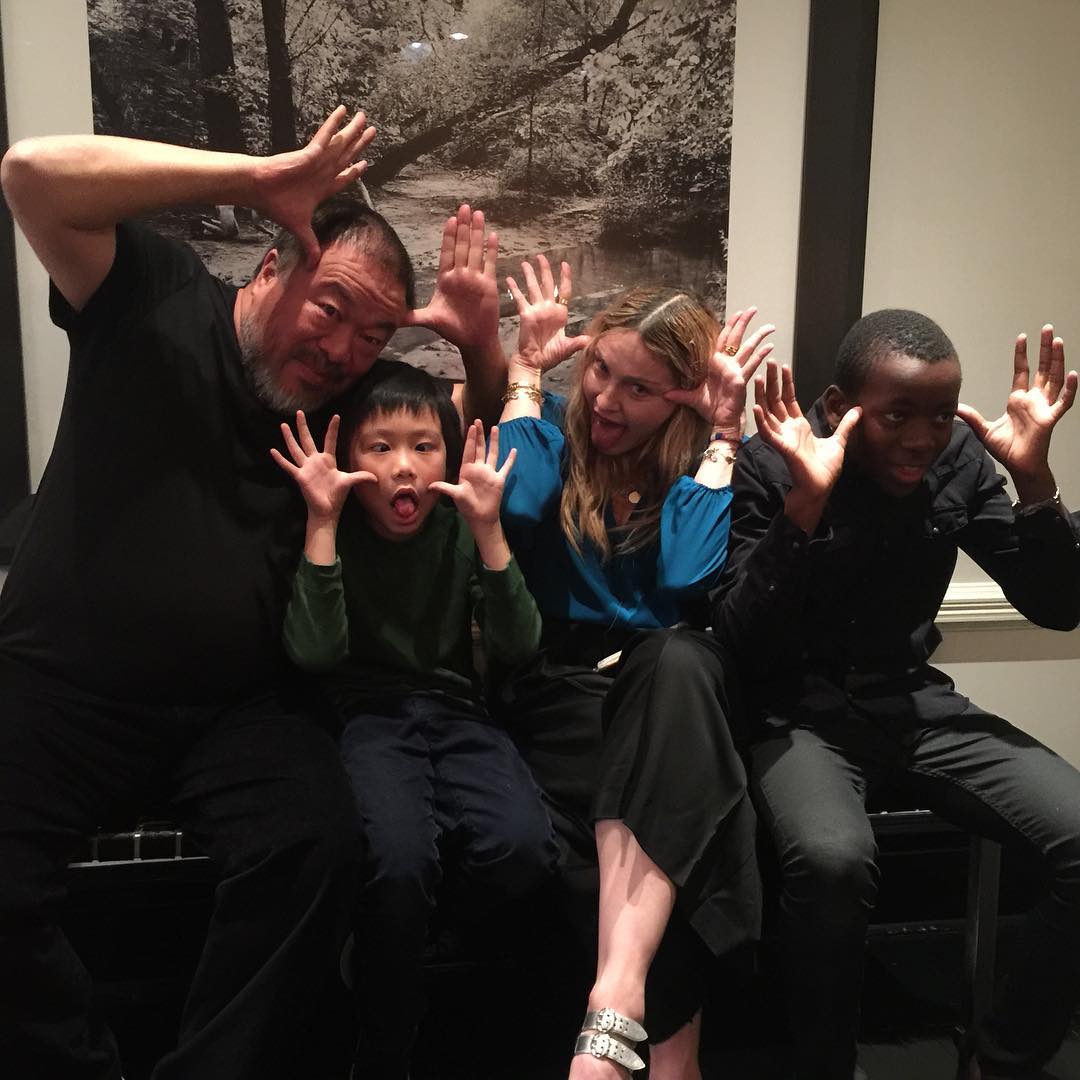 Madonna’s Rebel Heart Tour film scheduled to premiere on SHOWTIME on December 9 has a running time of 120 minutes. Most likely the broadcast will be edited (considering backstage footage will be included too).

The show will be available through On Demand from December 10

Madonna fans will descend on Reading Cinemas in Auburn this Saturday for a screening of Desperately Seeking Susan.

Released in 1985, the film is Madonna’s first major screen role and spawned the classic dance floor hit ‘Into The Groove’.

The screening is being hosted by singer, DJ and devoted Madonna fan Ray Isaac, who also produces the popular Madonna-themed parties, Tribute Bar.

“Why people should come? Because they will never get to see this movie digitally-enhanced and on the big screen again,” Ray tells SX.

“It has been 32 years since the movie was released and they are going to get loads of extra special things [on the night].”

Above: Madonna in Desperately Seeking Susan

These include behind-the-scenes footage, blooper reel, cast interviews and a special thank yo message from director Susan Seidelman.

Ray said Auburn’s Reading Cinemas is the perfect place to host the screening.

“The night will bring madonna fans from all over NSW. I chose this cinema because the city cinemas are way too small and I want to see my queen on the big ass screen in the best digitally-enhanced quality as possible. Wherever Madonna goes, so do her fans.”

Ray hopes to bring Madonna’s other films to big screen on a monthly basis with future screenings of flicks such as Who’s That Girl?, Shanghai Surprise and Evita.

“But only if the Madonna fans support the first movie,” Ray said. “If we see there is support we will put more on!”