Madonna came to play on Monday night’s (Sept. 25) Tonight Show, appearing in several segments where she showed off some of her favorite sparkly things from her new home in Lisbon, talked sexy presidential dreams, busted out a celebrity impression and slathered host Jimmy Fallon’s face with some of the products from her new MDNA SKIN line. Wearing a black jacket with sparkly silver lapels and a T-shirt featuring an image of her famous gap-tooth smile, the singer dropped a bejeweled skull on host Fallon’s desk and revealed that she’s still having “erotic dreams” about her last visit to the show, when former President Barack Obama was also a guest.

Madonna also told Jimmy she wanted to interview herself, so the pair played a little game of Lip Flip. With Falllon’s lips superimposed on her face, Madonna appeared to admit she likes speaking in a fake British accent, while Fallon took on a beefy Brooklyn tone and chatted about his dog, Juan.

Things got super weird when Madonna lost her mind about the recent eclipse, at which point Fallon (but really Madonna, pay attention will ya?) inexplicably sang an improvised tune about eclipses to the strains of Bon Jovi’s “You Give Love a Bad Name.” And then Madonna did an impression of Kim Kardashian arriving at a party and beatboxed some Run-DMC and that was the weirdest thing ever.

Watch it all below: 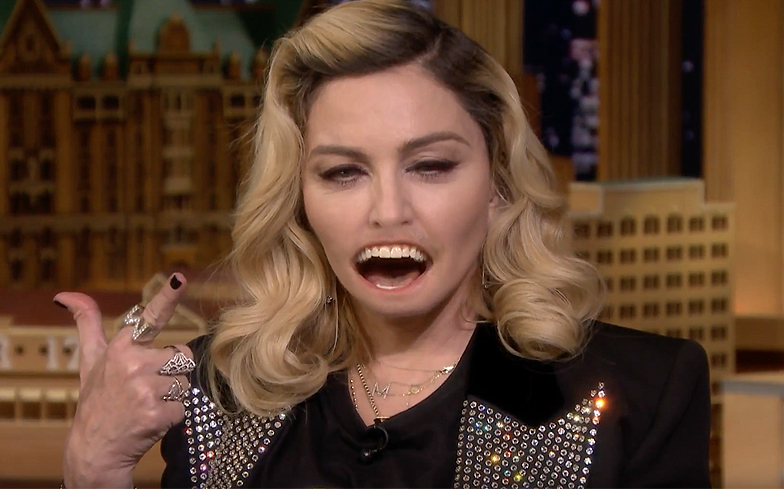 MDNA SKIN: Madonna & The Fat Jewish – Behind The Scenes – VIDEO 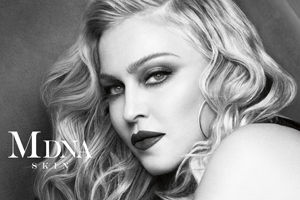 When ageless icons give us the inside scoop on their trusted beauty tips and skincare routines, we pay close attention. And when said icons debut their own skincare lines? Well, we can hardly contain our excitement. Such is the case with Madonna’s line: MDNA SKIN. It’s not exactly new, per se, but it will be new to the U.S. population as of tomorrow, September 26. Do we have your attention yet?

Byrdie’s Editorial Director, Faith Xue, will be attending the official release tomorrow (and talking to the singer herself), to glean every juicy detail about the buzz-worthy skincare line. But in the meantime, we thought we’d share some helpful information about the line and why it just might give you the skin of your dreams—like an (answered) prayer. Keep reading for everything you need to know about Madonna’s MDNA SKIN line.

To provide some background, MDNA was founded in 2014 in collaboration with Madonna, the renowned Tuscan spa town of Montecatini Terme, and MTG—a well-known Japanese beauty care company. The line was grounded in the goal to provide beauty solutions to enhance (not hide) one’s individuality.

We also love the brand’s message and goal of inclusivity: “People possess their own unique beauty, no matter what their age, nationality, or gender is. However, they may not see it when they look in the mirror because they are measuring themselves against a stereotypical ideal. We strive to provide the key to opening the door your intrinsic beauty so that you may discover your true potential and through invigorated confidence, even change the way you live.”

A bold statement? Yes. But also, we’re very much aware of the borderline life-altering effect that a good skin day can have. Thus, we’re intrigued.

The skincare line is comprised of two different components which encourage the engagement of all five senses: a technology-based weekly “ritual” and a product-based daily “routine.” As of right now, the details are hush-hush, but we do know the routine will be composed of a face wash, rose mist, serum, eye mask, and eye serum. Additionally, the main ingredient in the line is called M.T. Parca, which, according to the official press release, “regulates functioning at a cellular level,” with main elemental components including sodium, chlorine, iodine, calcium, lithium, and phosphorous.

Not what you were expecting? Us either. However, according to the brand, these ingredients are natural to our body’s composition and therefore essential to the maintenance and stimulation of the skin’s health on a cellular level. The benefits: a balanced pH level, optimum skin functioning, replenished hydration, improved sebum balance, and increased cell turnover.

Not surprisingly, the line will have some exclusivity as far as availability. As of September 26, you can shop for products at Barney’s New York and barneys.com or (FYI!) you can shop for them today on mdnaskin.us.

Barneys New York invites you to the launch of MDNA Skincare. View the collection and meet Madonna on Tuesday September 26 from 6:30 PM – 8 PM on the Main Floor. 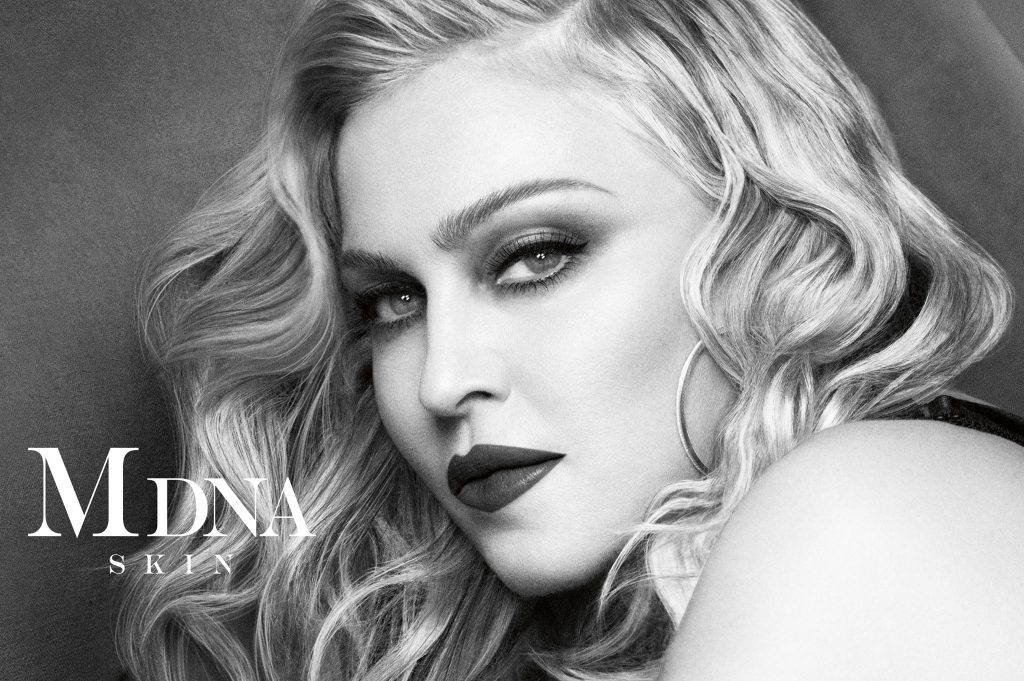 Madonna‘s MDNA skin care is already a top seller in Asia, and starting September 26th, we can finally get our hands on it too. “I’m tired of hearing people complain here that they can’t get it in America,” Madonna told WWD. And while Canada isn’t the USA, thanks to Barneys, us Canadians will have a chance to sample the finer side of skincare too. The line doesn’t come cheap. It consists of various masks, serums, a rose mist and a face wash and starts at $50 for a set of four eye masks. The MDNA Skin Rejuvenator Set is the priciest item at $600.

The aforementioned set comes with their signature chrome clay mask, which is made from volcanic ash and eliminates impurities while delivering hydration to the skin. The coolest part about it, though, is that it comes off with a magnet. This is the Missy Elliot video version of face masks.

“It’s a line I can use every day,” Madonna continues. “Some things I use when I don’t wear makeup and am not doing shows, and others are specifically good for having to apply makeup and be on stage under lights.…I developed it for me specifically, but it also feels universal. I mean, my children use it, my friends use it.”

She kicked off the American launch with some teaser campaign shots featuring Instagram sensation, @thefatjewish.

Madonna at The Tonight Show with Jimmy Fallon tonight!

Madonna will sit down at The Tonight Show with Jimmy Fallon tonight to promote the MDNA Skin launch in the USA (which is officially available from tomorrow).

She just posted this shot of her outfit on Instagram, don’t forget to tune in! 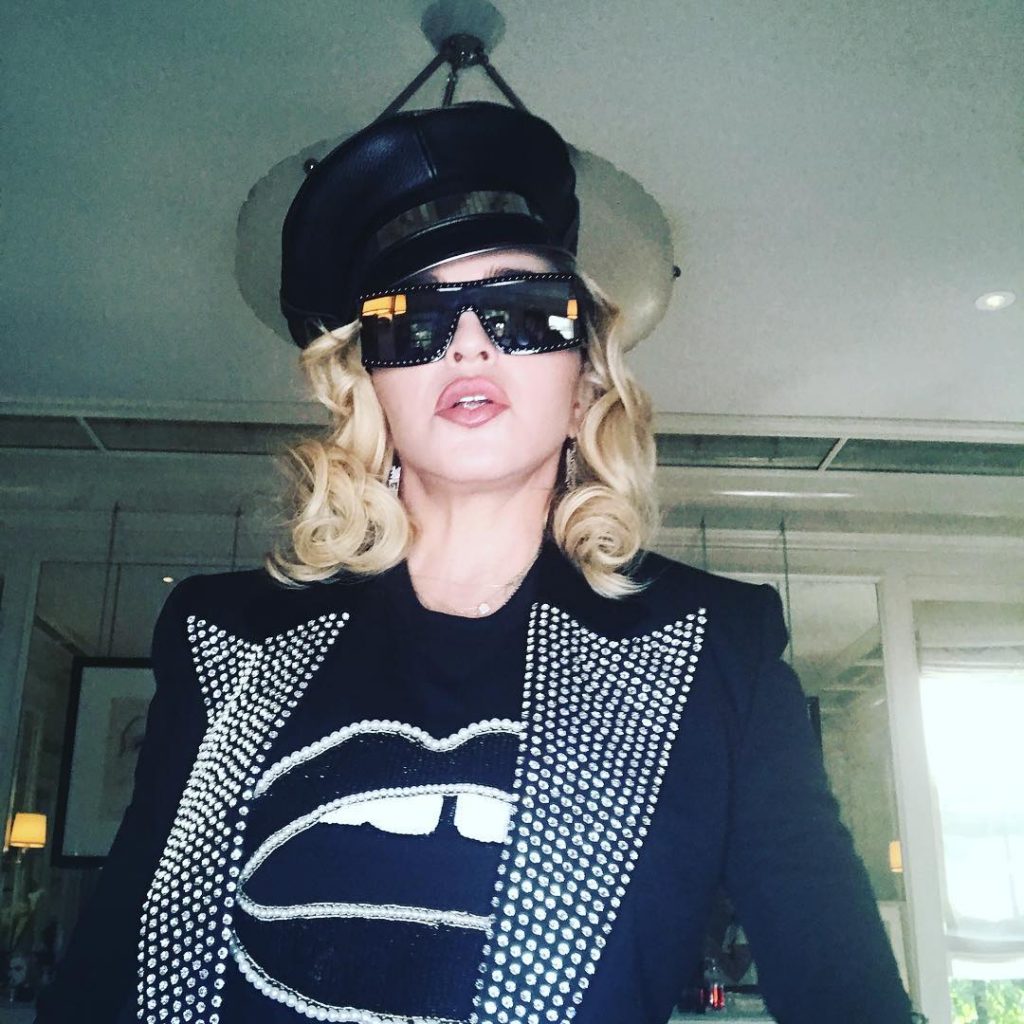 Madonna’s Rebel Heart Tour Film is doing very well in the charts, the DVD reaching the top spots in various countries such as Holland and Belgium. In Holland the live album enters the charts at number 14, In Belgium it reaches the number 8 spot.

Considering the fact that it’s been almost two years since the tour actually stopped in Amsterdam and Antwerp this isn’t such a bad score at all.

Tears Of A Clown

Madonna reveals new music – and Donald Trump may not be happy

MADONNA has let slip the direction of her fourteenth studio album.

The pop superstar has revealed that political criticism will feature heavily in the record slated for release in 2018. “World leaders are sinking society into insensitive and conservative thoughts,” the outspoken star explained.

“With the economy collapsing, people think that it is better to elect successful entrepreneurs to run a government.

“But that’s not how things work. Being the leader of a nation requires diplomacy, experience, and intellectual ability.”

She added: “It’s a colossal job, but more and more unqualified people are elected for that role.”

However while Madonna is no stranger to hitting out at the current president Donald Trump, she admitted the album won’t be a Trump rant set to music.

“I already expressed my point of view on him,” she continued to Portuguese magazine Veja, before admitting she doesn’t know who will be in office when the record comes out.

Donald has been dogged by claims he could be impeached over rumoured relations with Russia.

“On my songs I want to talk about how we got to this point,” the 59-year-old explained.

“We need to get involved and ask for the changes that we want.”

When the ageless beauty was asked if she’s tired of rebellion after over twenty years in the industry, the Bitch I’m Madonna singer replied: “No, no, no. I’m not tired.

“I feel even more energetic. Stronger to fight for what I believe. I’m a rebel and I’ll be rebellious till the end.”

Madonna is currently living in Portugal after moving to Europe to help her son chase his dream of becoming a footballer.

More at the DailyStar 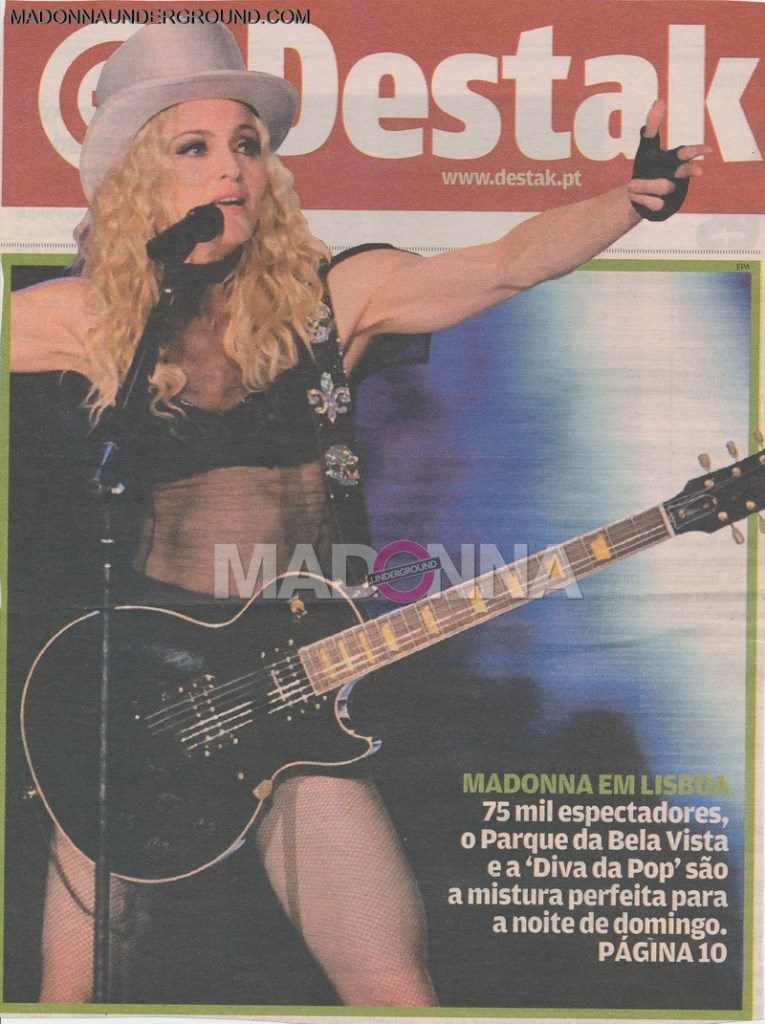 We have updated our Sticky & Sweet Tour 2008 world tour page with a load of newly added press material. Included is a ton of original scanned newspaper articles on the show in Lisbon as well as Germany and Holland.

Barneys New York is offering you the chance to pre-order your MDNA Skin products just days before the official launch of MDNA Skin in the USA.