Holland’s biggest radio Station Radio 538 has added ‘Medellin’ to their Maak ‘t of Kraak ‘t (make it or break it) category. Voting is important as it will mean airplay once it’s been ‘gemaakt’, so please vote ‘maken’ and do so HERE

Things are looking good at the moment with 94% positive votes!

Madonna is back with our first taste of new music from her forthcoming album “Madame X,” an era – if her initial release, “Medellín” is any indication – that’s as steamy as ever for the 60-year-old singer.

“Medellín,” a bilingual collaboration with Colombian singer Maluma, is the lead single from “Madame X,” an album inspired by the time Madonna spent in Portugal, she shared in a statement.

“Lisbon is where my record was born,” she wrote. “I found my tribe there and a magical world of incredible musicians that reinforced my belief that music across the world is truly all connected and is the soul of the universe.”

Maluma will also join Madonna on the “Madame X” song “(Expletive) I’m Loca,” one of the album’s many intriguing song titles that also include “God Control” and “Killers Who Are Partying,” with Quavo and Rae Sremmurd’s Swae Lee contributing guest verses to other tracks from the album.

More than 30 years after she released “La Isla Bonita”, Madonna is once again showing her admiration for Latin culture. Today, the music legend finally dropped “Medellin”, the first track from her forthcoming record Madame X. A duet with 25-year-old Colombian megastar Muluma, the reggaeton-inspired anthem sees the Queen of Pop whispering cha-cha-cha and crooning wistfully in both English and Spanish. “I took a pill and had a drink. I went back to my seventeenth year, allowed myself to be naive, to be someone I’ve never been,” she sings in the opening verse. “Sipping my pain just like champagne, I found myself dancing in the rain with you. I felt so naked and alive. For once, I didn’t have to hide myself.”

With a confirmed release date of June 14, Madonna first began teasing her fourteenth album on Instagram a few weeks ago – giving a comprehensive overview of the life of her latest “alter ego” Madame X, whom she describes as “a dancer, a professor, a head of state, a housekeeper, an equestrian, a prisoner, a student, a mother, a child, a teacher, a nun, a singer, a saint, a whore”. While the 60-year-old has remained silent on the precise inspiration behind the character, it definitely nods to John Singer Sargent’s infamous painting of the same name. His risqué portrait of a notorious American socialite living in Paris caused a scandal when it was exhibited at the formal Salon in 1884 before going on to become a classic.

Another key source of inspiration for the music? Madonna’s adopted home of Lisbon, where she moved to help her son David pursue his dream of becoming a footballer. “Lisbon has influenced my music and my work,” she revealed in an interview with Italian Vogue last year. “How could it not?…It’s also such a nice antidote to what’s going on in the music business now where everything’s so formulaic, and every song has 20 guest artists on it, and everyone sounds the same. Something’s gotta give.”

In voiceover she details 15 identities – dancer, prisoner, nun and whore among others – and explains: “Madame X is a secret agent. Traveling around the world. Changing identities.” And it seems that Madonna’s gaze is reaching just as wide for Madame X, which features the American rap artists SwaeLee and Quavo, as well as South American superstars Anitta and Maluma, who features on the album’s iridescent lead single Medellín.

Co-produced by her American Life collaborator Mirwais, Medellín is quite unlike anything we’ve heard from Madonna before, and her most subdued lead single since 1998’s stately Frozen. The most initially disarming about it is its balmy sense of ease. “I woke up in Medellín,” she sings over airy synths, before slyly adding, “Another me could now begin.” A rhythmic reggaeton beat that kicks in for a fiesta-starting chorus, with lovey-dovey call-and-response between the duo. At nearly five minutes, Medellín’s pacing feels refreshingly relaxed, though it wouldn’t be a Madonna co-write without a few lyrical clunkers (“pain” rhymed with “champagne”). It doesn’t exactly do much to dispel stereotypes of Colombia either (“we built a cartel just for love,” she sings).

But those are minor quibbles: Medellín is a potent reminder of Madonna’s deft history of meshing genres, while also a convincing addition to the roll call of western megastars like Beyoncé and Justin Bieber linking up with Spanish-language artists. And unlike the occasional trend chasing of her most recent albums MDNA and Rebel Heart, Medellín proves that she’s well equipped to weather the demands of today’s listening trends while bringing global styles into her own world. For Madonna, it seems that the streaming age may just speed up her shapeshifting.

More at The Guardian
Read more

While a song that begins with a cha-cha count-in and the lyric “I took a pill” sounds like it should be a dancefloor rager, it’s actually the unexpectedly low-key return of Madonna, who today dropped “Medellin,” the first single from her forthcoming album “Madame X.” A collaboration with Colombian singer Maluma — himself a native of the country’s mountain city — and her longtime collaborator Mirwais, the song combines a sing-song melody with a reggaeton-inflected, shuffing beat; she and Maluma pair trade off flirty verses in Spanish throughout the song.

While she pronounces the city’s name correctly (“meh-deh-zheen”), to her discredit she needlessly references the city’s violent past — it was the home base of drug cartel kingpin Pablo Escobar — in the lyrics: “We built a cartel just for love/ Venus was hovering above us.” Visitors to the city will know that it’s one of the last things residents want to talk about (unless they’re leading one of the tourist-baiting “Narcoterrorism tours”).

The song stretches on for nearly five minutes, stretching out toward the end with an extended instrumental bit designed for some low-key dancing. While produced by Mirwais, the song recalls Madonna’s previous Latin-inflected work with producer/songwriter Diplo.

The rest of the lyrics are more impressionist and romantic, and the city is only mentioned incidentally. “I took a pill and had a dream/ I went back to my seventeenth year, allowed myself to be naive, to be someone I’ve never been,” she sings on the song’s opening verses. “I took a sip and had a dream/ And I woke up in Medellín.”

And while the song may not be the dancefloor-filling that fans might be hoping for, it’s a sultry and promising introduction to Madonna’s latest era. 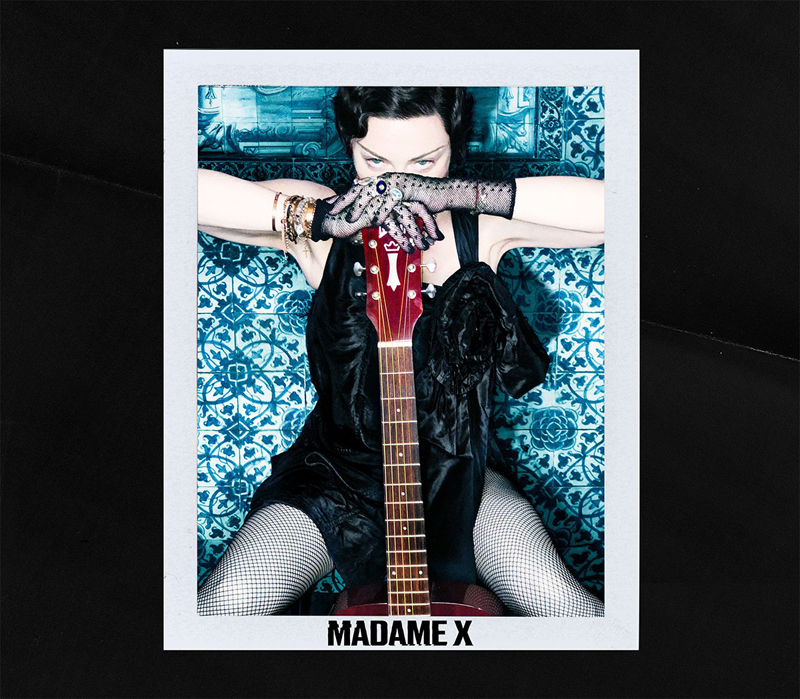 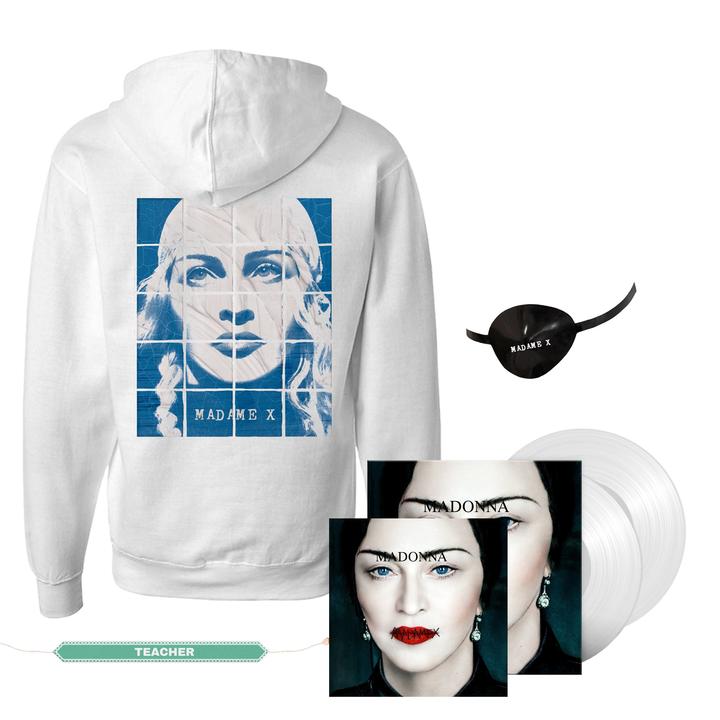 Be prepared to spend it all because the official Madonna store has lots and LOTS of goodies for you, click HERE to find out 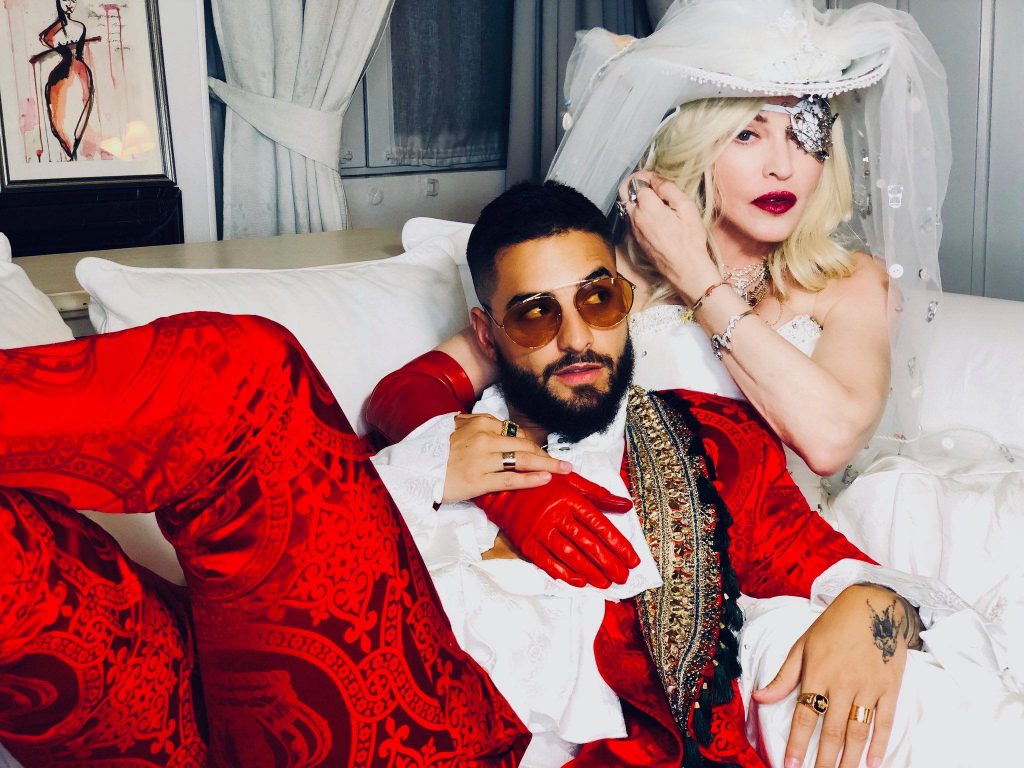 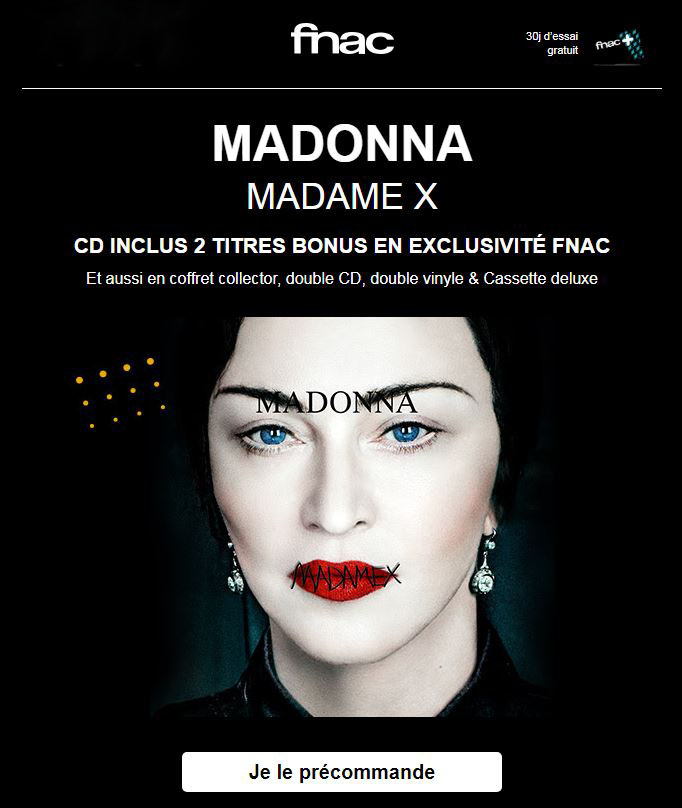 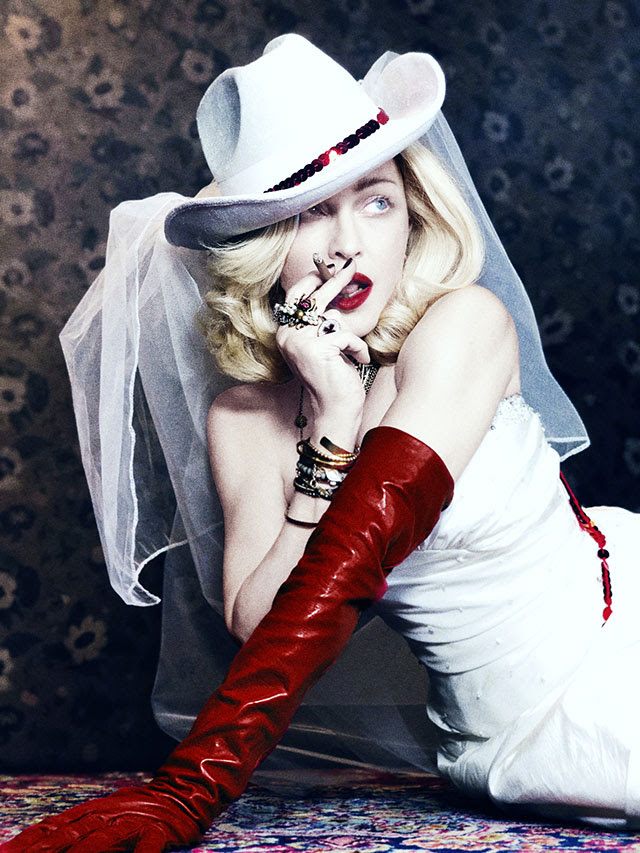 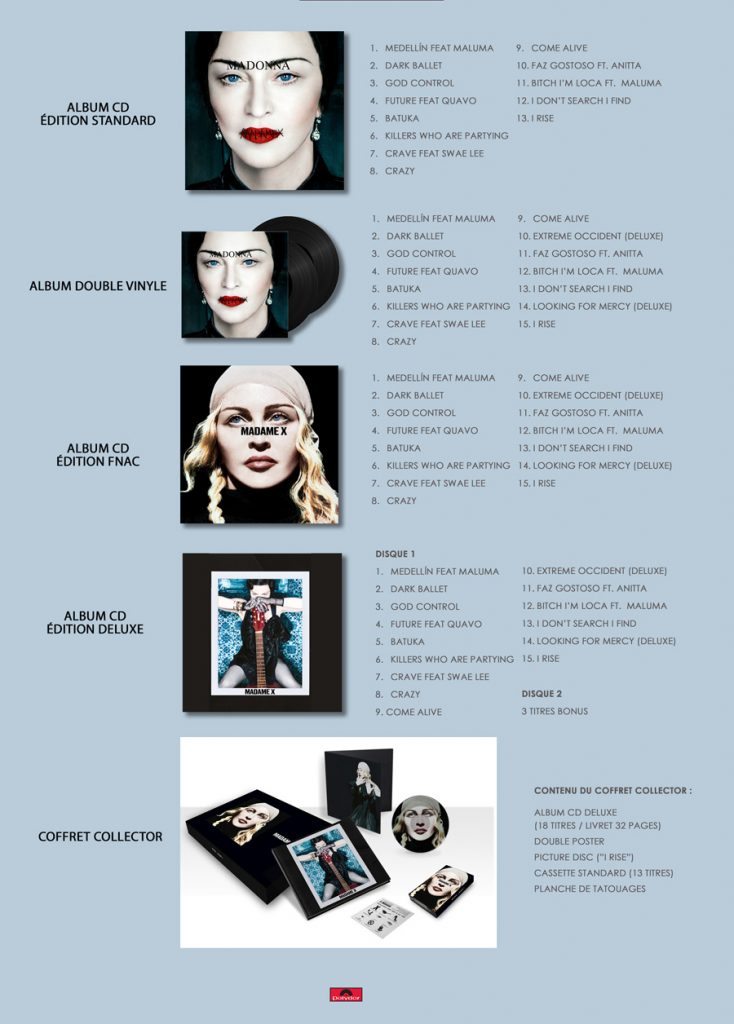 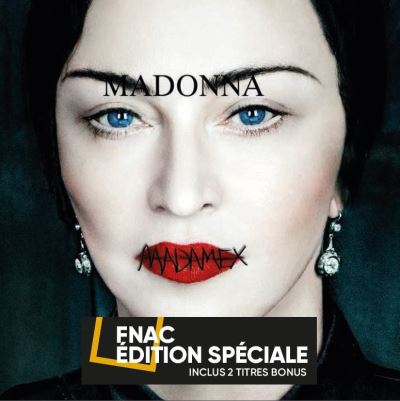 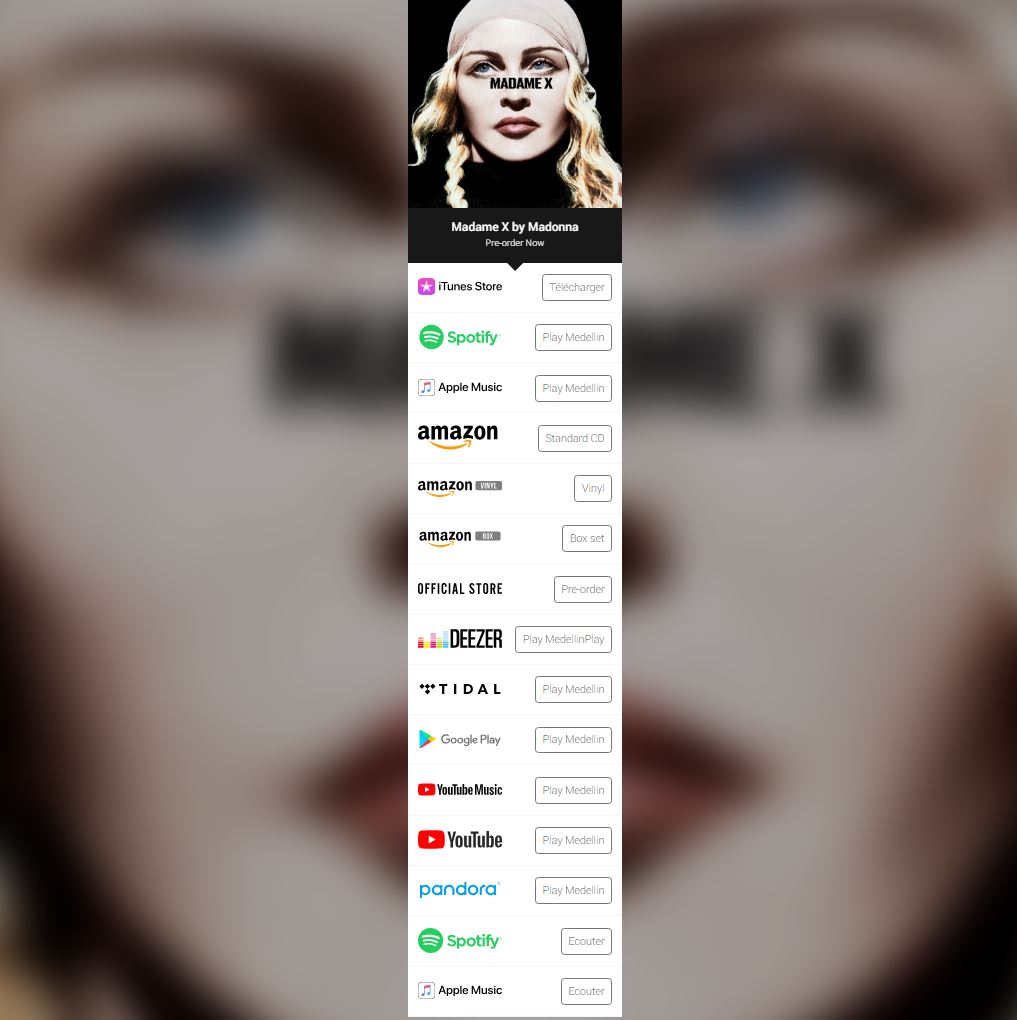 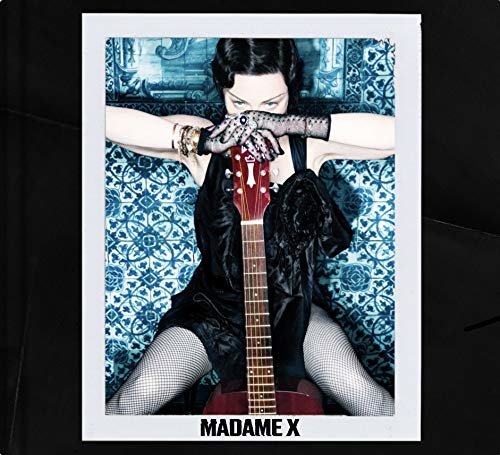