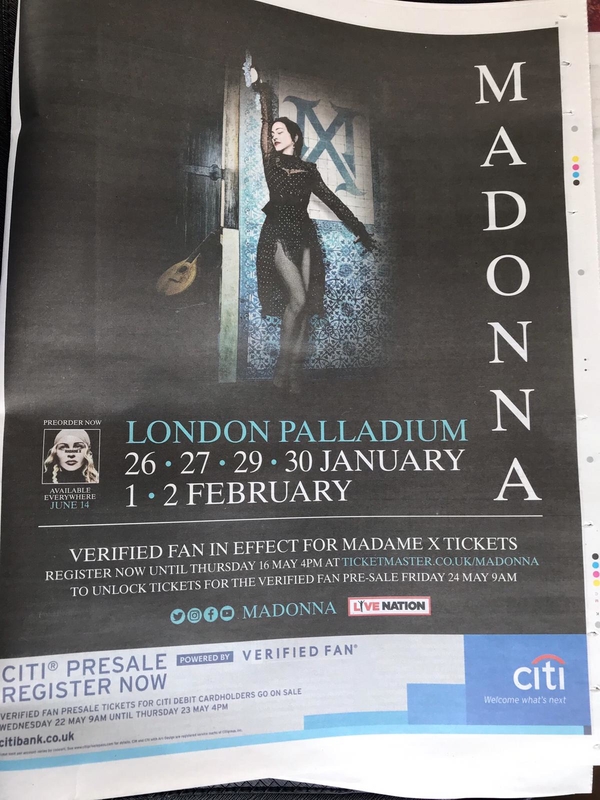 This full page ad for the London dates was featured in today’s Metro.

In support of her 14th studio album ‘Madame X’ it’ll be a rare chance for fans to see the singer in an intimate venue.

Tickets go on sale across the next week through various releases including Madonna’s fan club and Ticketmaster’s verified fan sale.

The London Palladium has a capacity of just 2,800 so seats are expected to be snapped up quickly.

If you want to be prepared ahead of tickets going on sale then you can find out the seating plan, where to buy them and prices below.

Here’s the standard seating plan for the London Palladium. This should give fans an idea of what ticket type they’re after when tickets go on sale over the next week.

How to get tickets

Tickets go on general sale at 9am on Friday May 24

To access the sale you must sign up to Ticketmaster Verified Fan by 4pm on Thursday May 16 at ticketmaster.co.uk/Madonna .

For all the info on presales go to our article here.

How much are tickets?

Madame X at The Palladium in London – pictures

The Palladium has undergone a Madame X treatment 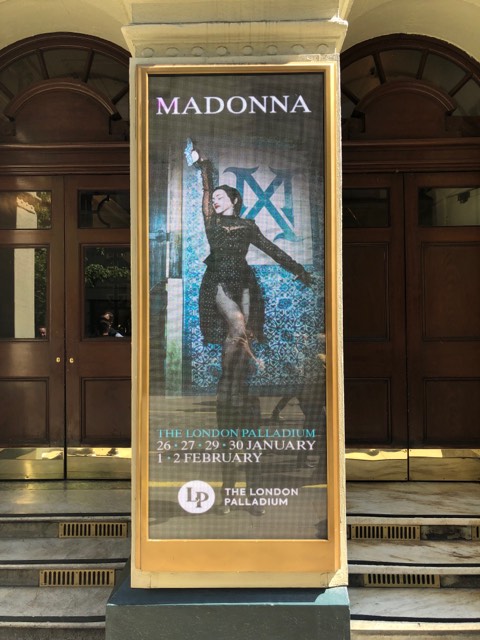 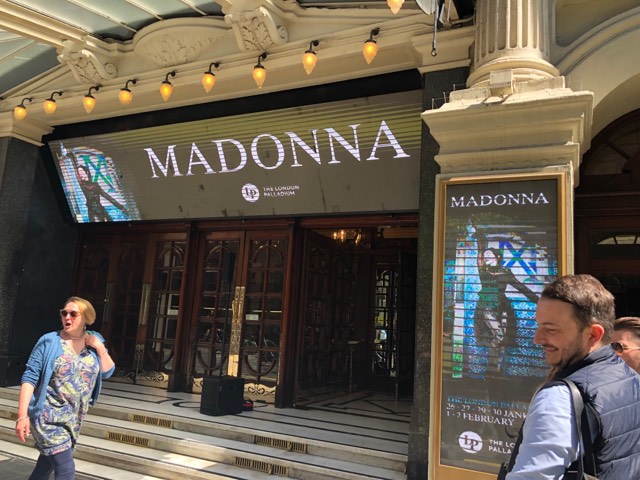 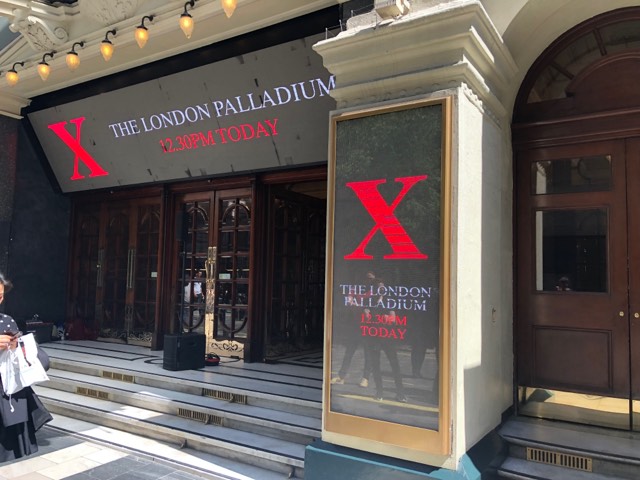 Thank you Benjamin for the pictures!

Express Yourself at The London Palladium today

How do you express yourself? Show us at 12.30pm today outside The London Palladium 👀 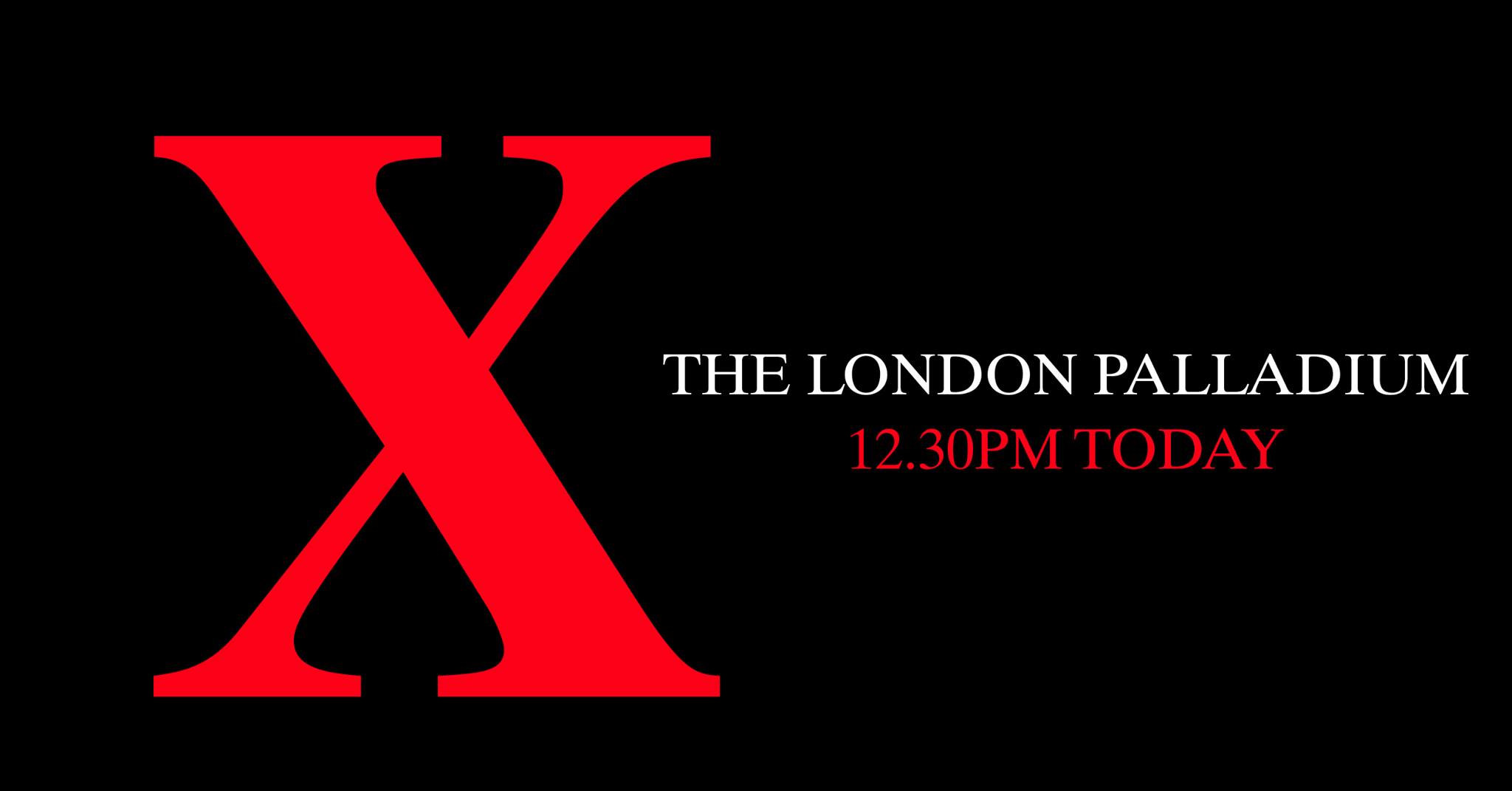 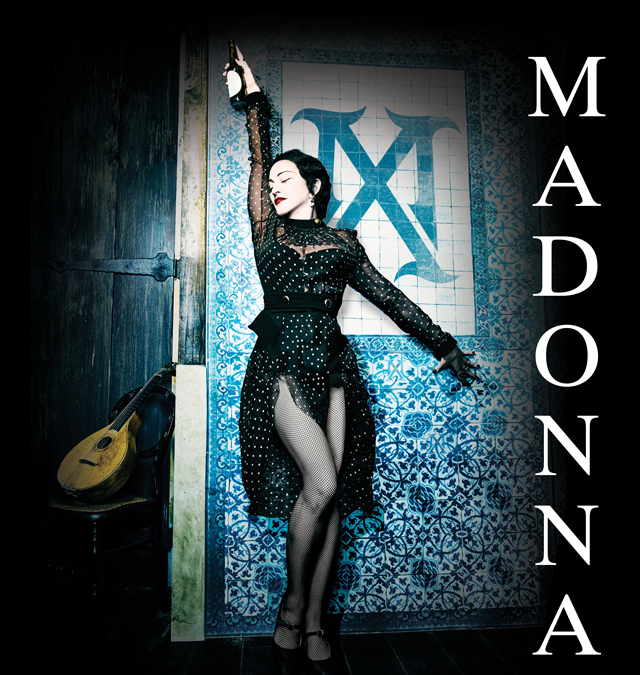 Madonna today unveiled the dates for her MADAME X performances at the iconic London Palladium, giving fans the opportunity to see her like never before! These intimate shows are confirmed on 26, 27, 29, 30 January and 1 and 2 February 2020.

As announced last week, the Madame X Tour will launch in North America on September 12th at the BAM Howard Gilman Opera House in New York and will feature multiple nights of shows in each city including performances in Chicago, Los Angeles, Las Vegas, Boston, Philadelphia and Miami in 2019. The Madame X Tour will then resume in early 2020 with the London Palladium dates, plus shows at the Coliseum in Lisbon and at the Grand Rex in Paris. Dates for the additional cities listed will be announced soon. 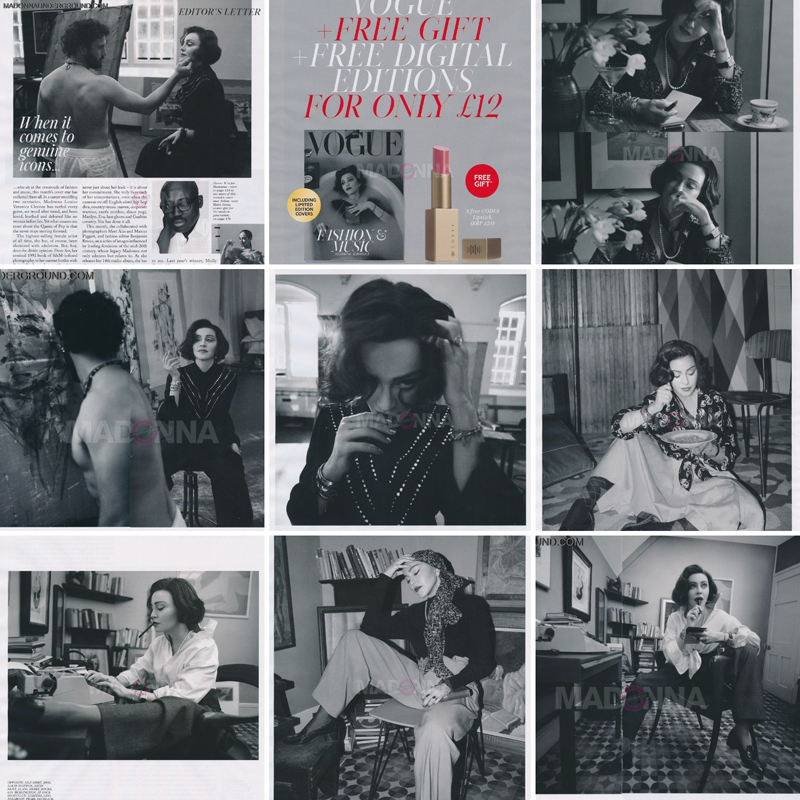 We just finished scanning the entire British VOGUE article for you to read/view. Check out the full thing on our Madame X page (press section).

British VOGUE with fantastic new Madonna photoshoot and interview is now also available in Holland. Please try stores that import British magazines such as Waterstones (in stock) and Athenaeum. 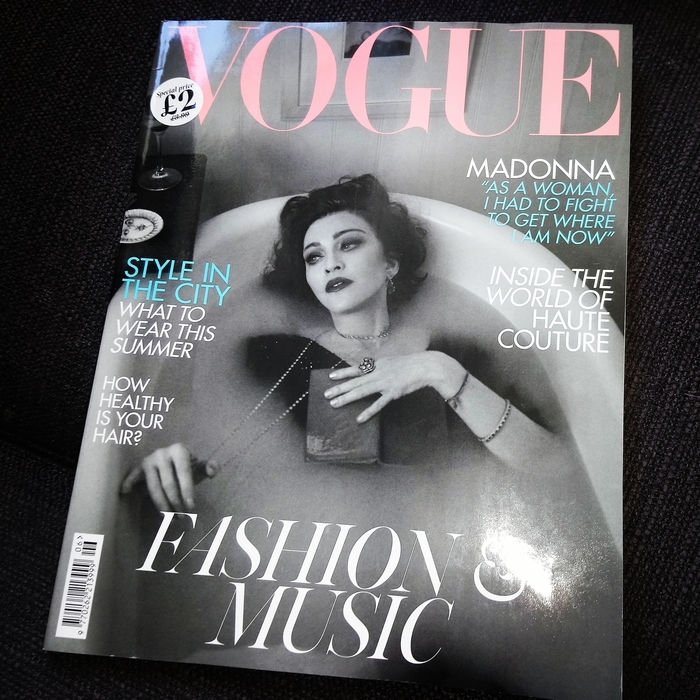 Listen to radio interview Madonna at On With Mario Lopez

Listen to radio interview Madonna at On With Mario Lopez HERE

Hear Madonna And Swae Lee Team Up for ‘Crave’

Madonna has dropped another track from her upcoming album, Madame X, this time in collaboration with Rae Sremmurd’s Swae Lee. The song, “Crave,” is a sultry pop number about hungering for another person and was produced by Mike Dean, a frequent collaborator with Kanye West. “My cravings get dangerous,” Madonna croons. “I don’t think we should play with this.” Lee steps in for a smooth-talking verse midway through the track.

“Crave” is the third song to appear off Madame X, which will be released on June 14. She previously dropped inspirational number “I Rise,” as well as her upbeat single “Medellín,” which features Colombian singer Maluma. Madame X is the singer’s first release since 2015’s Rebel Heart and will feature several collaborations, including with Migos’ Quavo and Brazilian singer Anitta. Maluma will also appear on another track titled “Bitch I’m Loca.” Madonna said of the new album, “Lisbon is where my record was born. I found my tribe there and a magical world of incredible musicians that reinforced my belief that music across the world is truly all connected and is the soul of the universe.”

Madonna also recently announced her “Madame X” tour, which kicks off September 12th at the BAM Howard Gilman Opera House in Brooklyn, New York. On the tour, Madonna will perform multiples nights each in a handful of cities, including the Chicago Theatre in Chicago, the Wiltern in Los Angeles, the Colosseum at Caesars Palace in Las Vegas, the Boch Center Wang Theatre in Boston, the Met Philadelphia and the Jackie Gleason Theatre at the Fillmore Miami Beach. Advance ticket requests for the Madame X tour are available through Friday, May 10th, with ticket confirmation to be fulfilled by May 17th.

“CRAVE” MARKS THE THIRD OF 5 SONGS 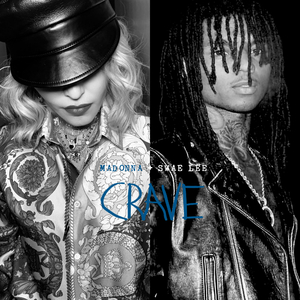 Madonna today released “Crave” featuring Swae Lee and co-produced with Mike Dean and Billboard. The infectious pop gem, co-written by Madonna and Starrah, is the third track of five songs to be previewed before her highly-anticipated new studio album Madame X debuts globally on June 14. Following the release of the critically-acclaimed “Medellín” and the empowering “I Rise,” additional songs to be shared with fans include the Jamaican dancehall vibes of “Future” featuring Quavo on May 17, as well as the sonically innovative “Dark Ballet” on June 7. To listen to “Crave,” visit HERE. The music video for “Crave” is coming soon.

Madonna announced earlier this week her Madame X Tour, a series of rare and intimate performances taking place exclusively in theaters in select cities. Demand was so overwhelming, additional shows have already been confirmed and are available for ticket request alongside the original shows through Friday, May 10 at 11:59pm ET. In New York, 12 shows are confirmed at the BAM Howard Gilman Opera House on September 12, 14, 15, 17, 19, 21, 22, 24, 25, 26, 28 and October 1. In Los Angeles, nine shows are set at The Wiltern for November 12, 13, 14, 16, 17, 21, 23, 24 and 25. Shows at the Chicago Theatre are on October 15, 16, 17 and 21. The Madame X Tour will also visit Las Vegas, Boston, Philadelphia, Miami, Lisbon, London and Paris. Dates and details on those cities to come in the near future. Tickets and further information is available at madonna.livenation.com. Here is a link to a video from Madonna about the Tour: https://madonna.lnk.to/TourVid.

Influenced creatively by living in Lisbon, Portugal over the past several years, Madame X is a collection of 15 new songs that celebrate Madonna’s career-long affair with Latin music and culture as well as other global influences. Singing in Portuguese, Spanish and English, Madonna collaborated on Madame X with longtime producer Mirwais, as well as with producers Mike Dean and Diplo, among others.

Of “I Rise,” NME says the song, “is politics and positivity combined,” while Rolling Stone calls the song, “Uplifting” and Billboard says its, “Powerful.” NPR says, “Medellín is a carefully dosed combination of…coolly narcotic dance-pop…and energetic reggaetón,” while Entertainment Weekly declares the song is, “A breezy, summer-ready anthem…” The Guardian says, “Medellín is a potent reminder of Madonna’s deft history of meshing genres.”

Madame X from Live Nation, Interscope Records and Maverick will come in a standard and deluxe version of the album and is now available for pre-order. Album pre-orders include a download of “Medellín,” “I Rise” and “Crave,” which is available across Apple, Spotify (pre-save), Amazon and all DSPs. Exclusive album pre-order bundles with limited edition merchandise are now available direct from Madonna.com. 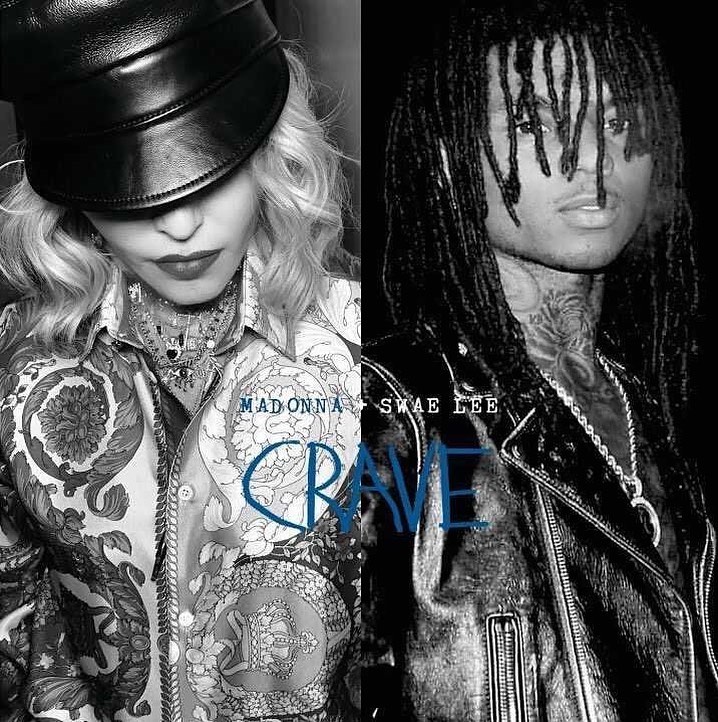 The third track to be taken from ‘Madame X’ (and rumoured second single) ‘Crave’ is now available in certain parts of the world. For all those still unlucky and not able to stream, hang on just a few more hours! 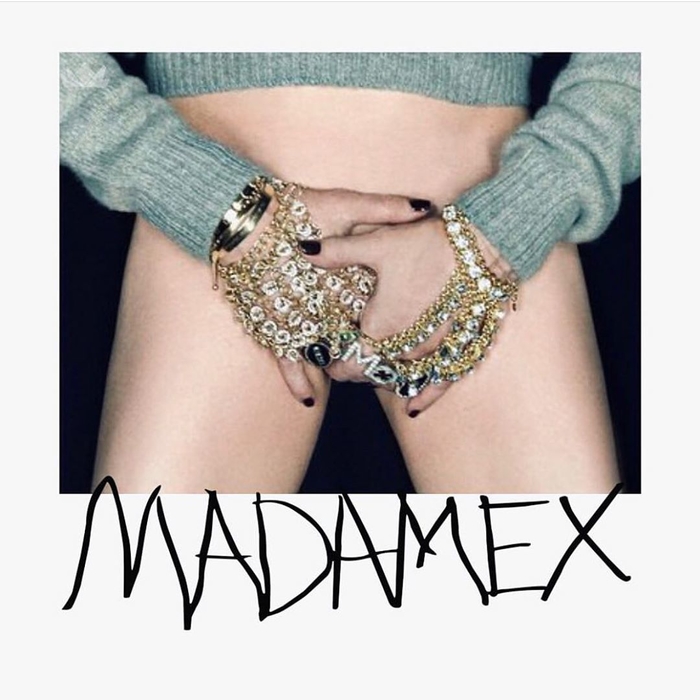 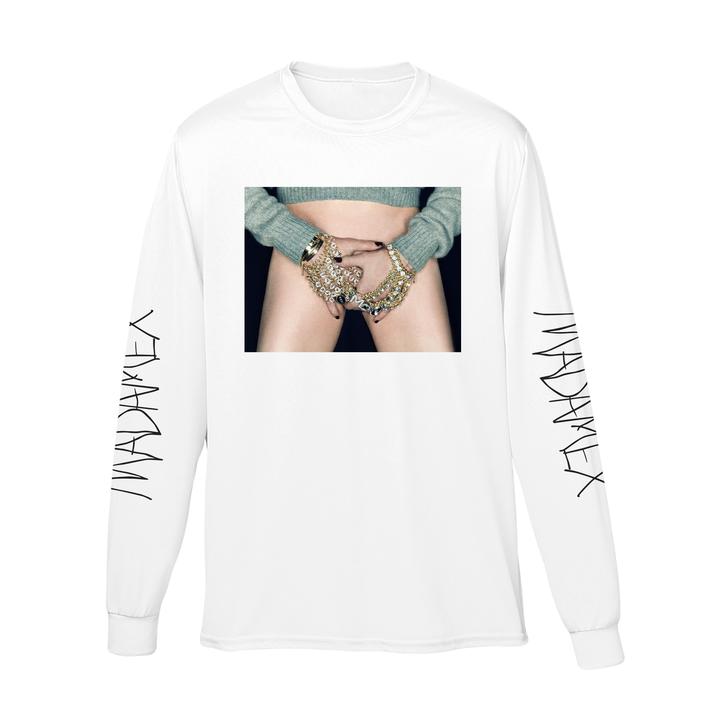 Available for a Limited Time Only!

Madame X & Madonna are printed in black down the sleeves.

Madonna’s unyielding presence is comparable to a desert rose.

Raise your hand if Madonna‘s mild interjection onQUAVO HUNCHO did away with your heart. The anti-ageist fancies herself the same person who once trolled David Letterman with yes/no answers to the point of ridicule. That’s where Swae Lee comes into play, as the Tristan to her Isolde, the Billy Bob to Angelina’s vial of blood. Between the two of them, there’s no shortage of spunk to make the rounds.

It’s easy to see why Madonna went with the much-younger Swae Lee as her fictional “better half.” The twenty-something-year-old is essentially a water-downed version of the men she used to date (i.e. Dennis Rodman). So, before you go about doubting her personage, check the transcripts one last time before perusal.

While “Crave” is already available in select markets, the full-version only becomes available to North Americans at midnight. After seeing Madame X through to the finish line (tomorrow, May 10), the 60-year old singer will embark on a short concert run in three major US cities: Chicago, New York, and Los Angeles.

I’m tired of being far away from home
Far from walking home, far from where it’s safe
Hope it’s not too late
Rush, rush, rush on you, love, love, love on you
Love you like a fool, put my trust in you.