There were a lot of Dutch and European press that attended the press conference with Jean Paul Gaultier today (February 2013). They all came to have a first look at The Fashion World Of Jean Paul Gaultier – From The Sidewalk To The Catwalk in the Kunsthal in Rotterdam. The press conference was started and introduced by Thierry-Maxime Loriot (the curator of the exhibit).

After his introduction Gaultier entered the stage and made sure to make everyone smile instantly. He responded to each and every question with great detail, only to sometimes forget that he was holding a microphone and due to the many hand gestures it was sometimes a bit difficult to understand him. The man is hilarious! 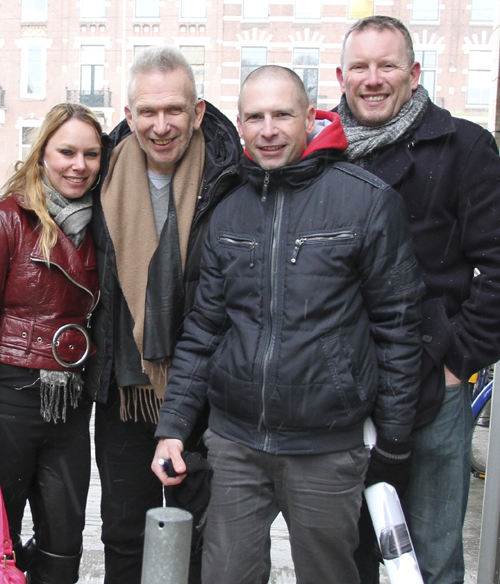 Jean Paul Gaultier told all about the exhibition and explained he wanted the exhibition to have a living feeling to it. He created someting extraoridinary; the mannequins have faces projected onto their faces and they’re talking, creating an illusion as if real people are standing there.

Gaultier said that the exhibition here was his favorite, he loved the place and thought it was beautiful. Gaultier said that in everyone and everything he sees beauty, and wants to find a way to express that through fashion. As a small boy he developed his fascination with the corset after finding one in a closet, he then created his first cone bra for his teddy bear (displayed in the exhibition).

Of course Gaultier spoke about his collaboration with Madonna. The first time he worked with her was for the Blond Ambition Tour and most recently for the MDNA Tour. Gaultier said he first was a fan of her, before she became a fan of him. Together they are like two crazy little children. The first time that she wore one of his creations was during the Desperately Seeking Susan premiere.

Gaultier wanted to show a mixture of a strong, masculine and feminine woman through her. He said it wasn’t his idea to put a cone bra on her male dancers, this was entirely on her part. He ended his story on Madonna perfectly by saying that with Madonna it is not only the voice and the music, but when you love her, you love who she is and what she stands for, the person Madonna.

After the interview with Thierry it was time for a short Q&A with the press, only four questions were asked and MadonnaUnderground got the privilege of asking the fourth and final question: Of all the costumes you created for Madonna, which one is your own personal favorite? He responded by saying that those were probably the ones still hanging in his closet, the ones that were never used.

After a brief photo call for the press we got to see the exhibit for an exclusive first look.

Immediately you see the golden and salmon colored corsets used in the Blond Ambition Tour. Both costumes were Madonna’s, she herself has agreed to lend them for this exhibition. Because these are the ones she actually wore on stage, there is some damage to them (especially the gold one).  Very interesting are the original polaroids shot during the fitting sessions of the costumes, as well as the original sketches. The most recent corset of Vogue of the MDNA Tour is here on display as well.

In a different room you can see the costume of the opening section of the Confessions Tour as well as the infamous costume worn by Madonna during the fashion show in 1992 where she exposed her breasts and launched her Erotica era.

The other creations are also breathtakingly beautiful, the details, the material, the fantasy and the final project = perfection.

After receiving a press pack and lunch, we spoke to Thierry-Maxime for a bit and took a picture with no one other than Jean Paul Gaultier himself. He was kind enough to sign some posters too. Gaultier is an incredibly friendly and joyful man, someone that instantly brightens up your day.

The exhibit is a true must see for everyone interested in fashion, beautiful creations, Madonna fans, or just for people wanting to take a peek inside this talented man’s brain. The exhibit opens tomorrow and on Sunday for general audience.