Madonna back in the Adamastor

Today, the American singer gives the first of eight concerts scheduled for the Coliseu dos Recreios in Lisbon. 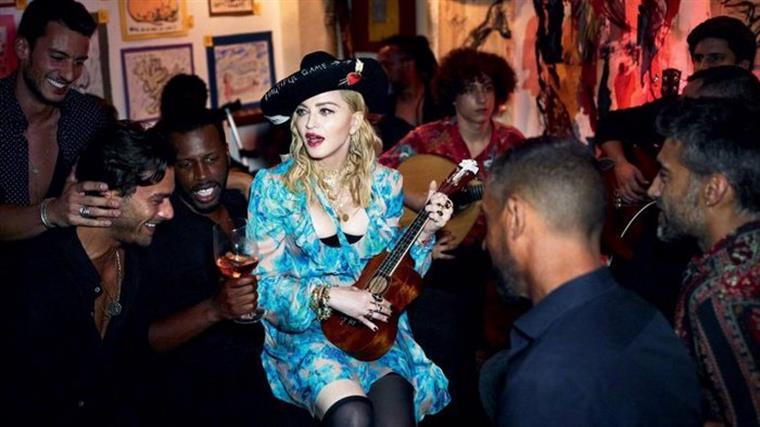 Madonna landed in Lisbon this week and returned to the house near Largo de Adamastor, which, although the singer has gone on tour, is still leased to the American star. And this time, it’s literally back to work: starting tomorrow, the Madame X tour, the result of the self-titled album she released last year, starts her stage on European soil. The place chosen was precisely the same place where Madonna cooked Madame X – Lisbon.

Today, the singer then gives the first of eight concerts on Portuguese soil, all scheduled for the Coliseu dos Recreios. The 15-track album features collaborations with names such as Dino d’Santiago, Anitta or Gaspar Varela, Celeste Rodrigues’ young great-grandson guitarist, as well as some members of the Batukadeiras de Portugal Orchestra. Madame X is the result of a cultural melting pot in which Madonna says she emerged when, shortly before her 60th birthday, she moved to Lisbon, where she joins pop with Latin and African sounds as well as the fado tones she has been listening to. Alfama

The accompanying musicians on this tour have signed a confidentiality agreement, but SOL knows that Gaspar Varela will share the stage with the artist. Likely is also the presence of Dino´Santiago, who in Lisbon, judging by what was being shared by the artist on social networks, was a kind of musical cicerone of Madonna and a bridge of contact with Cape Verdean culture. It was even Dino who presented the project of the Batukadeiras Orchestra, which he sponsored in 2017, to the American singer.

Beyond the guests, possible is also an evocation to Celeste Rodrigues, for whom Madonna never hid the affection. In December 2017, during a Lisbon meeting, the two shared the interpretation of Elvis Presley’s Can’t Help Falling In Love and at the end of this month Celeste Rodrigues, who died in August 2018 at the age of 95, flew at the invitation of Madonna to New York, where she spent the year.

From what the SOL learned, Madonna spent the last few days surrounded by the whole family at Adamastor’s house, with the exception of her eldest daughter, Lourdes, 23. The house, where the singer moved from after having lived in Ramaquê Palace, on Rua das Janelas Verdes, is located on the same street where Portuguese banker Horta Osório also maintains a residence and is owned by a businessman from Lisbon and Porto at night. .

The troupe was also joined by 61-year-old artist Ahlamalik Williams’s latest boyfriend. The model, choreographer and dancer, born in April 1994, is 25 years old. The 36 years that separate them have been surpassed after working together on the international Rebel Heart Tour in 2015 and 2016. Williams is also part of the cast of Madame X and, as such, will go up with his girlfriend to the playground.